We were up at 5:30 AM and, after we had coffee, we started to pack the trailer. It took a while because Sandy had a lot of gear and containers and, this being only the second time we have stayed in this unit, we didn't have a system. Oh well, no need for a system after this. Finally, everything was organized so I hooked the truck up and loaded the bike. Then it was time to circulate through the campsite and say goodbye to everyone until next time. We were rolling by 8:00.

The exit through Traverse City involved US 31, Airport Road and Three Mile Road back onto 31. It was very quiet as one might expect on a Sunday morning. We stopped at a McDonald's near M 72 where I learned that if you ordered a steak, egg and cheese bagel with no onions, they had to cook a new one with no onions which took a long while. Next time, I will just ask them to scrape the onions off one they have already cooked. 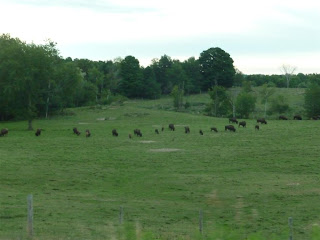 I noticed that gas in Mancelona was $3.65 per gallon, a large jump from the $3.40 in Traverse City despite being only a short distance away. We cut over to Gaylord again and took I-75 north. Some tinting to the leaves let us know fall was not far away. Again, there was no wind on the Mackinac Bridge although we did have lane closures on our side this time.

Quote for the day: "I'm a fanatic without a cause and I'm committed to it." Brother Dave Gardner RIP 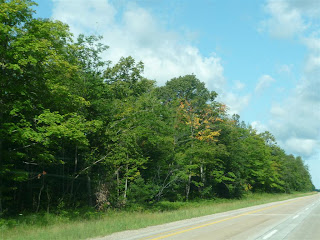 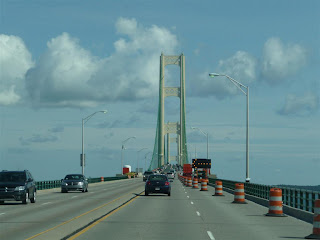 The usual closed lane on the Big Mac

Crossing the Big Mac and looking out at Mackinac Island, I noted that it has been many years since we crossed over on the ferry for a visit. I decided that we should plan a stop here before too much time goes by. We reached to Soo and stopped at the Krist station for cheaper US fuel. Gas here was all the way up to $3.72. Hard to believe this is in the same state as Traverse City but still way cheaper than Canada.

US bound traffic was, as usual, lined up over half way across the International Bridge. On the Canada bound side, there was no one. I really mean no one. We drove right off the bridge and into an empty Customs booth. After a couple of basic questions we were free to go. The total time elapsed for the crossing was less than one minute, including non-existent waiting time. I wish it was always like that. On home soil, we drove down Bay Street and swung up to Highway 17 past the Beech 18 on skis in front of the Bushplane Heritage Museum. 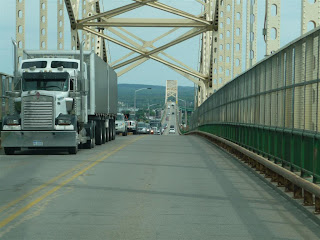 US bound traffic lined up on the International Bridge 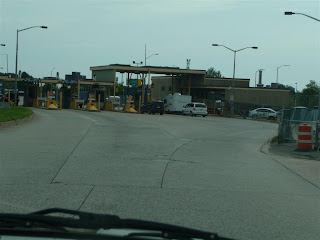 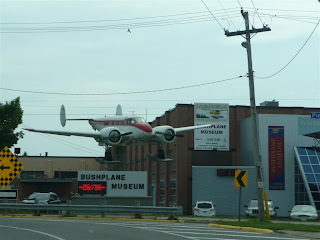 It looks like it is landing on Bay Street

We made a quick stop for lunch to go at McDonald's on the way out of the Soo. The last 180 miles was uneventful although a westbound motorcycle reminded me why I don't like modulated headlights. Sure they flash and get the attention of car drivers, but they are annoying and may even defeat their own purpose if the oncoming driver fixates on them. We did see three westbound members of the Red and White being escorted by an unmarked OPP cruiser and I listened to NASCAR on XM as most of my Fantasy League drivers got taken out. Nothing unusual there.

We pulled into (or rather, backed into) the driveway at 4:30 PM. There was a rain cell just north of town that dumped on us just after we finished unloading everything and getting it stowed away. That was prefect timing. 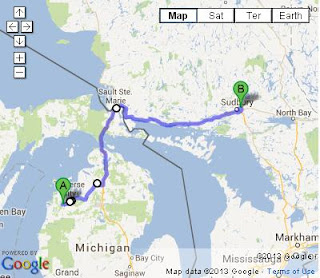