It is hard to believe that this is the 20th consecutive year the Freedom Riders have put on the Freedom Rally here in Sudbury. With the ending of Cyclefest in the Waterloo area on Labour Day weekend and the Rally In The Valley in the Ottawa area on Canada Day weekend, this is the last of the small club camping rallies that I am aware of. But our club likes to host a weekend for old friends and new to gather so we keep on doing it.

We were faced with some challenges this year as the Mine Mill Campground rented the hall that we usually use to a caravan of Airstream trailers. Rally Director Ken did an amazing job in finding new ways of doing things and what should have been a major setback became a mere blip.

I have to apologize for not taking any pictures as the weekend went on. As Treasurer, as well as having responsibility for a few other areas, I just never got around to thinking that I should record some of the activities.

We set up on Thursday. The company we rented the huge tent from to replace the hall had it set up before noon. Sandy and I put our trailer in the parking lot and set up the cots and folding picnic table inside. Then we ran some errands and helped get things ready. One of the Thursday traditions is to stuff the goody bags that are given away at registration, which we did on the open stage at the and of the hall. We had lots of help including some of the junior members and got the job done in style. As usual, a number of rallyists arrived a day early and were set up in the old camping area east of the hall.

Friday morning, final preparations were addressed. Registration started at noon and soon everyone was sporting an arm band. The portable toilets were delivered twice, once from a vendor we did not contract and then by the proper outfit. Concession was set up in the big tent, using Don's huge Featherlite trailer parked adjacent as the back room. We had an electrician member wire boards for power and had the fridges and freezers plugged in. The food choices for lunch and supper were simple, pizza, hamburgers and sausages on a bun, but I lived on them all weekend.

Old friends from southern Ontario, Eric and Sherry, were on their way to the Upper Peninsula of Michigan and stopped in after noon for a quick visit. They will be passing back through on Monday and will be spending the night with us. This was the only photo in my camera after the weekend was over. 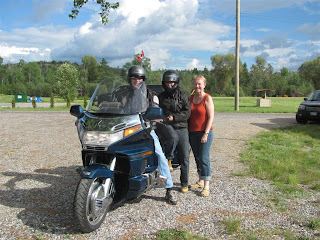 Eric, Sherry and Sandy at Mine Mill Campground

Entertainment both Friday and Saturday nights was provided by Spyder's Web Band of Sault Ste. Marie. Shirley and Mark have been entertaining at the rally for years and are part of our Freedom Riders family. The music was great, however, the stage faced the big tent and the back walls seemed to act as an amplifier. Comments were made by the campers on Saturday morning so the Saturday night tunes were cut short. We also grill hot dogs on Friday and Saturday nights, as many as you can eat for free, and the bonfire was big enough to see from outer space. In the morning, coffee and a continental breakfast were complimentary. Sandy was one of the people making sure this happened.

Saturday, Rob took a group ride out for most of the day. Sunday afternoon, we held motorcycle games on the property. Sunday evening, we had a banquet catered by Classic Catering. It was a fine meal and no one went hungry. After dinner, awards and prizes were handed out. The final night is usually pretty laid back as everyone contemplates tear down and the trip home in the morning.

Monday morning, everyone pulled together and we had everything squared away quite early. The weather was great except for one quick rainstorm that blew through on Saturday afternoon. All in all despite the issues we had to deal with, this was one of our best rallies.

Monday evening, Eric and Sherry did stop by the house for the night and even brought meat loaf and potato salad for supper. We haven't seen much of them in a few years and it was good to catch up. Eric and I had a chance to compare notes on some of our relative accounting jobs. OK, it would have bored anyone else stiff, but we are both bean counters by nature.
Posted by Jim "Skid" Robinson on 8/05/2013