It is hard to believe that VROC has been gathering at Cycle-Moore Motorcycle Campground in Interlochen, Michigan for twelve years. The weekend is upon us again and this will hopefully be the last trip for the big trailer. I ordered a 5 x 10 single axle unit from PROLine in New Hampshire earlier this week which should be ready for us on September 6th.

It was a pleasant morning as we pulled out of town and headed west on Highway 17. We stopped at the picnic area beside the Spanish River to check the tie downs and found that the two on the left were loose. I tightened them again and we moved on in earnest. I began to regret getting only four hours sleep last night.

Near Iron Bridge, about 140 miles into the trip, we came upon something I have never seen on a highway before. It took a few moments to realize that the lime green jackets we were looking at were worn by two people traveling the same way we were. On Segways. On the paved portion of the two lane road. Not the safest arrangement with oncoming traffic and I am pretty sure the only people legally allowed to run them on roadways are police and mailmen. I'm not sure where they were going but they were loaded for the long haul.

Approaching the border, I stopped to switch cell phones and credit cards. On the bridge, we noted that the Canada bound traffic was lined up more than usual but still had less cars than a good day heading for the US. We got in line at 2:13 and by the time the agent admitted us, it was 2:48. Still, only cursory questions and no one has looked in our trailer in a year. I do wish at least one of the right hand truck lanes here would be restricted to trucks and trailers only. 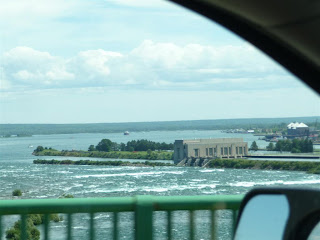 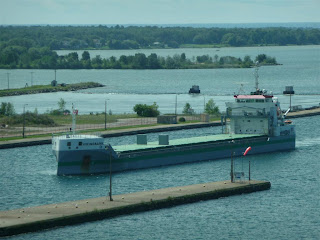 Lake boat entering the US locks 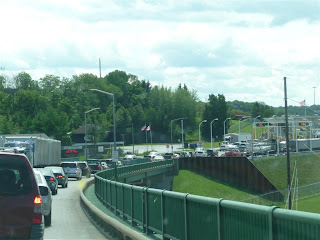 Getting closer to the booths 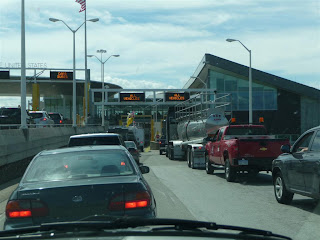 Since the McDonald's just over the bridge had mysteriously vanished, we went to the next exit and found one 1.2 miles off the Interstate. With food to go, we continued south on I-75 to the Mackinac Bridge and the Lower Peninsula.

I found a funny thing with the GPS as we were going along. There are three main ways to get to Traverse City. You can go on down I-75 to Gaylord and across to Kalkaska; down US 31 from Mackinaw City and then US 131 to Kalkaska; or in  Petoskey, you also have the option of staying on US 31 all the way to Traverse City along the Lake Michigan shoreline. Each time the GPS did a recalculation, it picked a different route even though the starting point for that section was always Mackinaw City. I would love to see what kind of logic the unit uses when it works out what it thinks is an optimal route, because this one changes its mind more often than a high maintenance woman,

Traffic was light and there was little traffic and no high winds going over the Mackinac Bridge. Unusual on both counts. 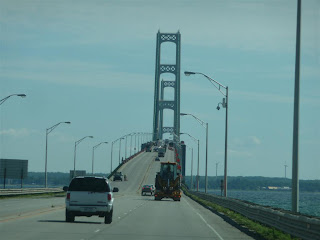 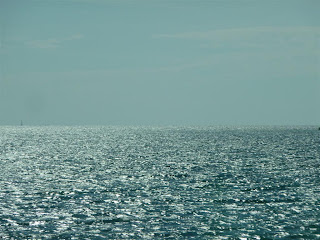 Opting for the I-75 route because it was smoother and faster than US 31, we reached Gaylord at 5:30 while trying to figure out where the day had gone. We cut over to 131 and down through Mancelona to Kalkaska where we followed M 72 to Traverse City. Bypassing downtown, we arrived at the crossroads in Interlochen at around 7:00 PM. The restaurant formerly known as Giovanni's has been renamed Maddy's Tavern and had a number of Vulcans parked outside, but there was no room for the trailer. There was also a large line of vehicles ahead of us waiting to turn left towards the village. We soon found that there was a ZZ Top concert going on this evening. Highway Patrol on I-75

Despite the crew that was out for supper, there were quite a few of our people in the campground. They had left the same space I used for the RV last year so I got located, unloaded the bike and unhooked the truck. Then we set up the inside of the trailer for living and hustled back to the crossroads to get a Subway sandwich for late supper.

Flatop had gone whole hog and ordered a full cord of wood delivered by a local vendor. It was a bit damp but was fine once it got burning. Soon, the rest of the crew arrived back from Maddy's. It was particularly nice to see Tomcat and Mouse, who have been absent for the last couple of years. Also, Bob and Linda from Warren, Pennsylvania were here for the first time and were staying in a cabin in Honor, a few miles down the road. Bob rode their Nomad 600 miles while Linda followed in the car.

We need to check out local accommodations since one of the compromises in the new trailer deal is that our camping days are over. The trailer will be too small to set the cots up in and Sandy refuses to tent again, not that I blame her.

The bonfire was nice but we were tired. Everyone else must have been too because I went to bed early and was still one of the last ones up. Not like the old days. Despite the cool evening, the trailer was comfortable with the ceramic heater (plugged into the campground 110 v) blasting away. 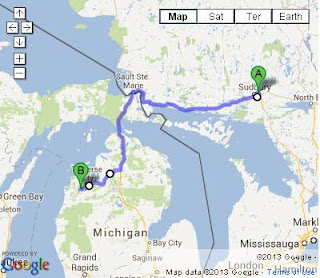