Today was the last day of August. Where has the summer gone? Again I was running on five hours of sleep as we headed south to visit the kids before the start of our September travels. It was a cool 14 C (57 F) after the cold front passed through yesterday. After packing, loading, fueling and an incredibly slow stop at Tim Horton's, we were rolling south at 8:00 AM on what started out as a traffic free road. 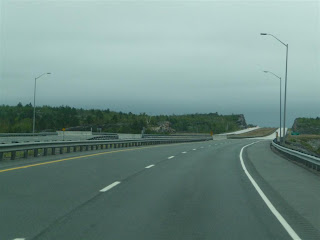 Leaving Sudbury with no traffic

Northbound traffic picked up as we approached Parry Sound, totally expected on Labour Day Weekend as the city folk try to escape their urban environment. We made a pit stop at Waubaushene but the lineup for the Ladies Room was longer than a US border crossing so we continued on to the Service Centre in Vaughn, where things were decidedly less crowded. We saw an O.P.P. speed trap just north of Barrie running LIDAR and were surprised to find the new Barrie northbound Service Centre was open. We'll have to stop here on the way back. Traffic was equally busy both ways on the 400 proving that some are trying to get into the very place that many others are leaving. 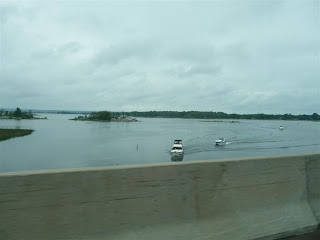 Boats on the Severn River 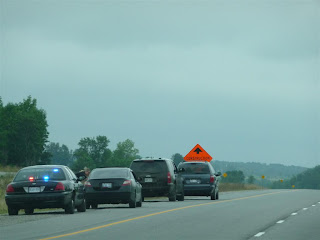 The merge lane off the ramp from Highway 400 to 401 westbound in Toronto has been widened and lengthened, eliminating the need for the dangerous forced merge that we have faced for many years. We hadn't come this way for a couple of years and were pleased with the new layout. That didn't help when we hit the express lanes and found them bogged down. The strange thing was that the collector lanes were flying by on our right. In fact, there were five spots on the way to Cambridge where we were forced to slow to a crawl or stop outright. We were now rats in the race. These spots corresponded to construction signs even though there was no work going on or lane merges. But traffic our direction was still way lighter on this stretch than the other direction. 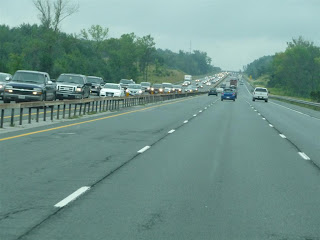 Near Milton, we again saw as sign for the Legendary Motorcar Display. Now that I have looked it up, we will have to put this place on a list of things we need to visit.

The two new Service Centres near Cambridge were also open so we stopped for lunch and got Tim Horton's in the Drive-Thru. Sandy had a toasted tomato asiago bagel and a fruit smoothie with yogurt. I had a couple of chicken ranch wraps that they didn't wrap the bottom of securely and they somehow missed the milk in my order.

I noted the gas at the Flying J in Ayr was $1.296 compared to $1.386 when I fueled in Sudbury this morning. I keep being bothered by how the fuel companies can keep gouging the north but have given up hoping it will get better.

The GPS SD card slipped again, rendering the mapping useless since it holds the map files, but I was able to reseat it as we were driving. We pulled into Heather and Tom's in Woodstock about 1:30 PM after having lost a half hour to the stop and go traffic. They left for a wedding at 2:30 so I called Kim to see how they were doing on the trip back from their week long trip to Pennsylvania. She said they were on the Peace Bridge so Mike and I both figured their ETA would be after 4:00 PM.

Tom's Netflix through his PlayStation 3 had The Walking Dead episodes available. I have a lot of the episodes recorded at home but missed the first few and have been looking for them before I tackle the rest. I watched the first episode before it was time to leave for Cambridge. I have the hardware so I really do need to get Netflix up and running at home. 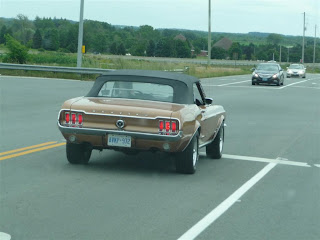 Kim and Mike took the girls on a week long road trip to southeastern Pennsylvania. They visited Hershey Park and Dutch Wonderland amusement parks and Jolene got to ride her first big rollercoaster, the Sooperdooperlooper at Hershey. This was quite the accomplishment for a four year old and she did it twice. In addition to the rides, they got to meet and/or visit with a number of cousins Sandy and I haven't seen in way too long. These are my mother's brother Warren's children, their spouses and offspring and that we haven't visited since about 1999. Sandy and I will also have to fix that soon. Cousin Nancy had a family BBQ and cousin Jamie, who couldn't make it, went to dinner with them in Bird In Hand. All in all, it sounded like a great trip. Mike uploaded the pictures and videos from the week and played them on the TV for all of us to enjoy. 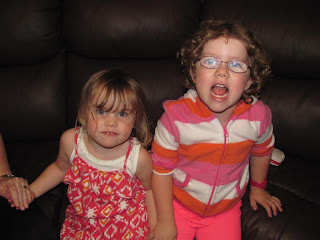 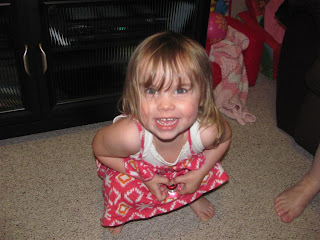 Robyn is a fierce one 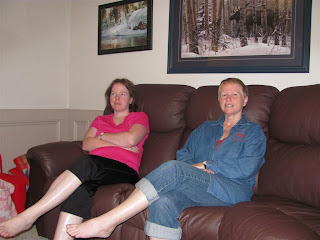 We went out to play with the Jolene and Robyn in the back yard.  The play was interrupted by a small bunny who was over in the corner of the yard nibbling on grass. It was fairly tolerant until the girls tried to get too close to it and then it set out for parts unknown. 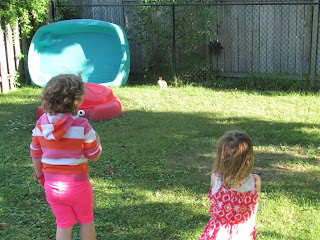 What's that in the back yard? 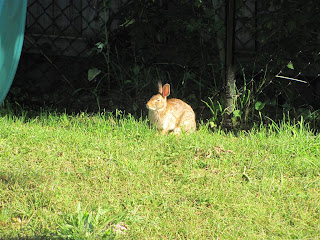 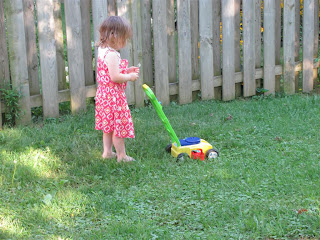 Mike ordered Domino's thin crust pizza and bread sticks for supper. I broke my rule about not having bread but I limited my intake. I hope this doesn't lead me to backslide on the diet that has me losing weight and improving my glucose readings. A couple of bread sticks won't hurt as long as I keep it at that. The piece of shoofly pie they brought back from Amish country probably wasn't a good idea, though. After the children went to bed, the four adults watched some cooking shows and talked about the trip.

We left at 10:00 PM for the return trip to Woodstock. I settled in to watch another episode of Walking Dead. Heather and Tom got in about 11:20 and went straight to bed. I remember being in the middle of Episode 2 of Dead and then it was suddenly Episode 7. Rather than go up and bother Sandy by trying to get into bed in the dark, I just rolled over and spent the rest of the night on the couch. 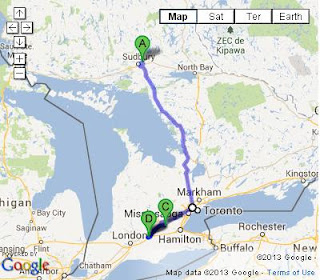