Happy Victoria Day, fellow Canuckians. Like Easter, the celebration of the Queen's Birthday does not fall on a specific date. Instead, it is the last Monday before May 25th. The resulting long weekend is often called the May Two-Four Weekend, which works because it marks the beginning of summer, the opening of many cottages (or camps in Northern Ontario) and the consuming of many two-fours (cases) of beer.

We skipped the continental breakfast at the hotel and, instead, stopped at McDonald's for the usual. I would have liked to stop at the Grove City Premium Outlets for a pair of Skechers Elite spikeless golf shoes, but they would not be open until 10:00 AM. Instead, we were rolling north by 6:50 AM under blue 57 F skies.

After some quick calculations in my head and a roll of the dice, we made it to the Angola Service Center with (according to Chev Driver Information Centre) 18 miles of fuel to spare. I took on the last tank relatively cheaper US gas in what was the 200th time I have filled up this Equinox since we bought it in September 2015. 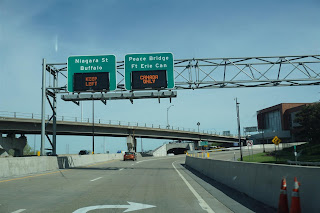 There were almost no vehicles on the Peace Bridge. There were five cars lined up in the NEXUS lane but no one was in regular Lane 5, so I went there. The agent laughed and said it wasn't unusual for people with NEXUS cards to ignore the regular lanes. He asked a couple of questions, I declared our goods including the two bottles of alcohol and we were on our way.

Once again, I forgot that the McDonald's in Fort Erie wasn't where the dumbass GPS said it is. We took an unintentional sightseeing tour, stopping at Shopper's Drug Mart for some Nin Jiom for Sandy, who had been coughing since we left Maggie Valley. Then we went to McD's, where everyone seemed to have gathered. Almost all were ignoring the kiosks and standing in line for the human cashier.

Finally, we left town and headed for Toronto on the QEW. 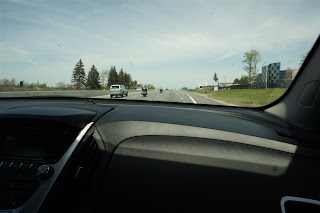 Near St. Catherines, we saw what I am sure was the Canadian Warplane Heritage Museum Lancaster bomber flying by. This would not have been unusual since we were not far from Hamilton and they often took paying patrons for flights. Especially on a holiday weekend.

It was only 60 F under blue skies as we approached the Burlington Skyway. I debated taking the 403/401 free highway to 400 North but, as usual, chickened out and took the overpriced Express Toll Route 407 instead. We reached 400 North without delay.

The southbound traffic on 400, returning from the first summer weekend in Cottage Country, was intense. Many vehicles, little movement. If I was forced to live in Toronto, I would find things to do that did not include spending much of my life sitting in weekend traffic jams. 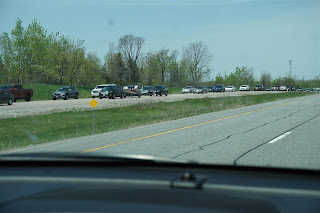 After a final stop in Waubaushene for fuel, we drove the last 150 miles straight through. An electronic sign south of the Seguin Trail said: "Expect Police Enforcement". Is there ever a time on a public road that we don't expect police enforcement? It isn't the Spanish Inquisition.

We arrived home at 4:45 PM. Bob had mowed the lawn and the clippings were set at the lot line waiting for pickup tomorrow morning. By 5:15, the bike was unloaded and in the garage and the luggage was inside and being unpacked.

It was a good first trip of the year. Now we have almost two weeks to prepare for the trek out west to Wolfman's Wandering Rally in Williams Arizona and High Sierra Redux in Topaz Lake Nevada. Maybe I can get some time in on the golf course as well. 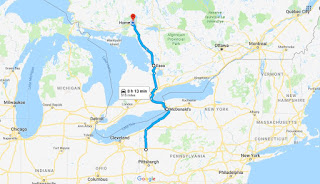