After a long and confusing winter, which started out like the good old winters of my youth, seemed to be over in February and March and then returned with a vengeance in April, I am pretty sure spring has finally sprung. Better late than never.

It is finally time to get our summer travel season underway. Tomorrow, we will head to the Smoky Mountains of North Carolina for a couple of weeks. The first week will celebrate 20 years of the South East Vulcan Riders and Owners Club (SEVROC) rallies, while the second will see a few Freedom Riders touring the area from a base at Two Rivers Lodge in Bryson City. During June, we will trek west to Williams, Arizona for the VROC Wolfman's Wandering rally. Then we will head up to Topaz Lake, Nevada for the VROC High Sierra Redux, reliving the great days we have enjoyed there in the past. On the way home, I hope to finally ride Beartooth Pass and spend a day or two riding in the Black Hills of South Dakota. With the Freedom Rally deferred for a year, Interlochen, Michigan is on the schedule for early August and we will wind up the season in Eureka Springs, Arkansas (as usual) in September.

In preparation for getting on the road, the Equinox had its front brake rotors replaced and the trailer got new hubs and bearings. The bike started right up and didn't appear to need any work right at this moment, but it sure could use a cleaning. I paid someone to wash, detail and wax the car, but I don't think anyone would want to tackle this bike and its12 years of road grime. I'll do what I can when the opportunity presents itself. (Of course, I have said that before and my rims are still filthy.)

One of the key organizers at SEVROC was supposed to be Cheap B (Mark). Unfortunately, he and his wife Wanda were in a motorcycle wreck in Georgia a couple of weeks ago. Although they both suffered severe injuries, it looks like they are on the road to recovery. They are two of the nicest people we know and, while they will be greatly missed next week, we are so grateful that they are still with us.

One thing that will have an impact on our blogging will be Sandy's new camera. She has done well over the years with a Panasonic DMC-TZ5, getting pictures from the car and the back of the bike to illustrate our days on the road. Unfortunately, the batteries got to the point where they would not hold a charge any more. She was never totally happy with this unit anyway, due to the delay between the time she pressed the shutter and when the photo was actually taken. In a moving environment, that often meant the difference between getting the shot and getting a picture of a telephone pole. Now she has a new Sony A5100 24 MP mirrorless camera with a 16-50 mm removable lens. While this camera has a lot of options and settings, there are very few physical buttons and wheels, with most of the settings being handled on the screen with a menu system. While this would be a drawback to an advanced photographer, in our situation it reduces the likelihood of accidentally changing something that would affect the photos. Most important to her; when she hits the button, the shutter clicks.

As we packed two suitcases (one for each of us when we reach our destination), two overnight bags (one for each of us to take into motels along the way), a shoe bag, a pillow bag, computer bag, a water bag, a bag full of riding gear, two camp chairs and a portable toilet, I reflected back on the years when we would go out for two months with only what would fit in two GoldWing saddlebags, a top trunk and one small bag of raingear. Sandy was a packing genius. Just as Parkinson's Law postulated that "work expands so as to fill the time available for its completion", Robinson's Law suggests that "luggage expands to fit the space available to carry it" and we now use all the capacity of the Equinox plus any spare nooks and crannies in the trailer just because it is there.

Our last-minute checklist was in play. I needed to be careful because this was the first US trip since last September and I hate that sensation of remembering something important about the time we are approaching Pittsburgh. US cash, passports, NEXUS cards, US plan added to cell phones, all the charging cables, medications, etc. It looked like we had it covered.

Mother's Day was the next day, so we dropped over to Extendicare York to visit Sandy's mom Jan and her roommate Pearl. We had a very nice visit and explained that we would be away for two weeks. 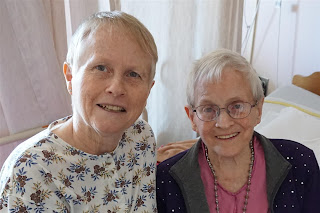 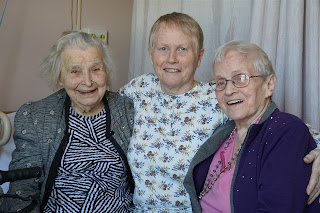 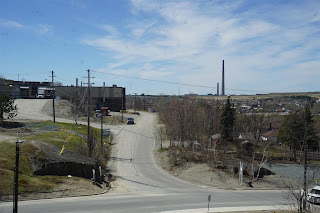 The view from Jan's window 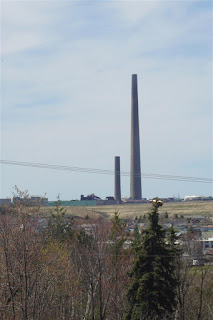 The INCO (Vale) Superstack - 1,250 feet tall and due to be decommissioned

Back at home, Leo stopped over to aid with the trailer hookup and motorcycle loading. Actually, he doublechecked me while I handled the task for the first time this year. By the time we were done, the suitcases were in the car, the bike was tied down in the trailer while the camp chairs and bike riding gear bag were also stowed in the trailer. Almost done, Sandy and I went out and picked up sandwiches at Subway. 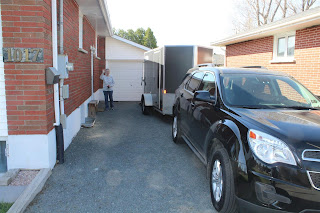 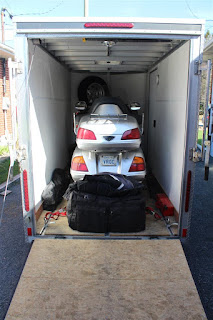 All that needed to be done in the morning would be to load the final few things in the overnight bags, put them in the car and move out. I hope we can be up by 6:00 AM and rolling by 6:30. The destination for tomorrow will be a Microtel near Washington, Pennsylvania, and we should be in Maggie Valley Monday afternoon.
Posted by Jim "Skid" Robinson on 5/12/2018