After we got back from the west last month, we were visiting the kids down in the Waterloo area when future son-in-law Tom told me about something his Southern Cruisers Riding Club (SCRC) did. It was called a Meet In The Middle and members from various areas converged on one central spot for a meal and some shared camaraderie. I remembered that Texas VROC does the same thing. Tom though the Ontario Frozen North VROC might like to try the same thing.

I posted the idea on the VROC Newsgroup and got favourable responses. Based on a relatively central location and excellent roads, Minden looked like a good "middle". We were pondering the Tim Horton's there but Guns suggested his home, a few miles north on Twelve Mile Lake. The meeting was set for noon.

Sudbury had a good contingent. After canvassing local VROCers, we ended up with five bikes meeting at the south end Timmy's at 8:00 AM. In addition to the usual culprits, Bob and Irene joined us. Bob and I worked at INCO and were active in USW Local 6600 and then 2020 back in the day. He rides a pretty 2000 Nomad outfitted with Premeux fairing and trunk. 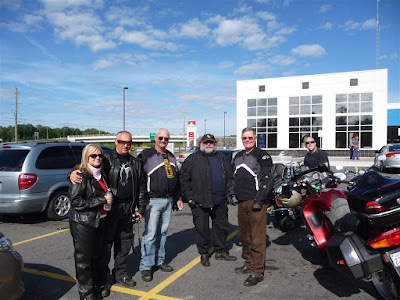 Irene & Bob, Me, Normie, Leo and Gary in Parry Sound
(Sandy behind the camera)
The ride to Parry Sound down Highway 69 was the usual. Straight down the road, nothing special. We stopped at the new Tim's south of town for a bit. Then the roads got more interesting. Horseshoe Lake Road to Old Highway 69 to 169 to 118 to 35 to Red Umbrella Road. The roads twist and wind and have more than their share of 70 and 60 KPH curves, with a few 50 KPH thrown in for good measure. Unfortunately, there were a few slow drivers out and, with limited places to pass, some sections weren't able to be enjoyed as much as they could have been. On one occasion, we met a cruiser right after a round of passing and playing catch-up, but luck was on our side. 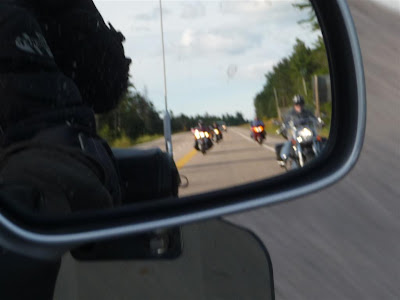 The Sudbury contingent on the road
We arrived at Glenn's right on High Noon. Gary V., Marker and Ralph from southwestern Ontario were already there. Then people started to roll in. RCAF from Ottawa, Bob (new guy) from Collingwood, Zever and Donna, ET and Heather and, last but not least, The Mighty Stonewall. Finally, our host Guns (delayed by a meeting in the City) showed up.

It was a good visit. We got a few photos of the gathering. Guns fired up the BBQ and brought out burgers, sausages and corn on the cob which the gang tucked into.

Due to a Freedom Riders engagement back in Sudbury this evening, our crew was forced to leave a little earlier than we would have liked to. The return trip went north on Highway 35 past Dorset to Highway 60, west to Huntsville, down Highway 11 a short way and across Highway 141 to Old 69, stopping at the same Tim's as on the way down. Then we road back up the last 100 miles the same as always. 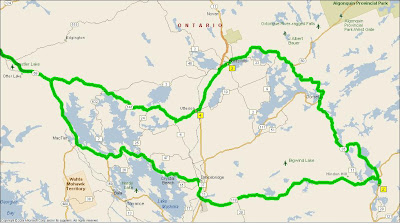 The loop (not counting Highway 69)
The ride was great. It covered some of my favourite Ontario roads and we got to see some old friends and make a few new ones. It was nice riding with Bob and Irene.

Thank you, Glenn, for opening up your home to all of us.

I can see this becoming a regular Frozen North event in the future.
Posted by Jim "Skid" Robinson on 8/16/2008