Ride to the Wall

Some Freedom Riders decided to gather at a New Sudbury Tim Horton's so we could ride over to the starting point at the Copper Cliff Legion together. We met Biker, Normie, Andrew (fellow S.T.O.P. Officer) and Charlie (Andrew's Dad and longtime snowmobile volunteer). Charlie is a new rider.

We rode over as a group, arriving at the Legion around 9:00 AM. The riders were gathering, as were the four Greater Sudbury Police escort Harleys and one cruiser. Many of the police were the same ones we work with on sled patrols in the winter. We registered inside as more and more bikes arrived. Near departure time, the blockers and police had a quick meeting. Then the group lined up with two police bikes in front, Butch and Cindy next, all the blockers (in orange vests) followed by the cruiser, the regular riders, the SCRC school bus and the other two police bikes. Tom, Heather, Andrew, Charlie, Gary and Norm wait patiently as the line forms
Finally, at 10:00 AM, the group rolled out. We took a spot near the rear because of the novice riders we were escorting. We left Copper Cliff and headed west on Regional Road 55 before turning onto the by-pass and proceeding back east south of the city. At each intersection, blockers dropped off and held traffic while everybody passed. Then they fell in at the rear. 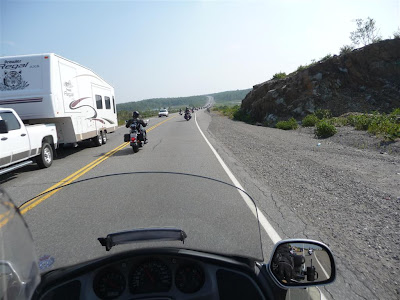 Some of the group ahead of us on the by-pass
Someone counted and said we had 125 bikes. Seemed like more to me. We continued east of Sudbury on Highway 17, holding the entire highway at about 100 KPH. Blockers kept the other traffic under control all the way. In Sturgeon Fall, we stopped for a comfort/fuel stop while many who rode last year commented on how much better the weather was this time. 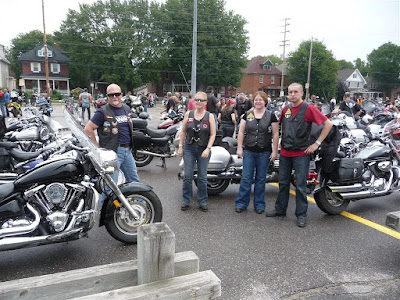 Biker, Sandy, Heather & Tom in Sturgeon Falls
From Sturgeon, we continued on to North Bay, where we received an assist by NBPS in getting to the Legion in one piece. We parked across the street in a large lot and walked over. 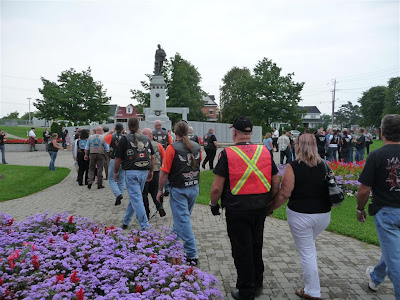 Riders file in to the Cenotaph 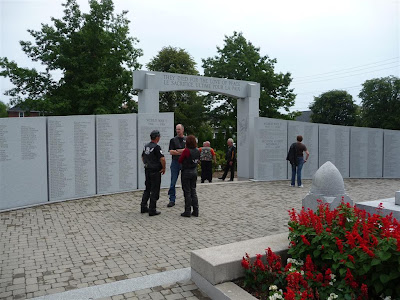 The Wall
North Bay has a very nice Legion and the Cenotaph and Wall are beautiful. After all were assembled, they piped in the colour guard. The Master of ceremonies introduced several speakers, including the Chaplain, we sang O Canada, some wreaths were laid, the bugler played the Last Post and we took a moment of silence to remember the brave souls who sacrificed everything for us.

After the service, we were served a fine lunch of soup, sandwiches and cookies inside the Legion. Then we headed back as a smaller group, some other having already left. The escort stopped again in Sturgeon, where phone calls told us that Sudbury was getting beaten by a severe storm. So much for better than last year.

We continued on but, because the sky suddenly looked very angry, we stopped again in Verner to put on rain suits. All was well until we were about 20 miles out of Sudbury, where the skies opened up on us. Some people stopped at the Kukagami Lake turn-off, but there was no shelter so I continued, following the leaders, and Heather, Tom and Biker followed. I had to keep the speed down, though, and lost contact with the leaders. The rain eased as we got to town.

We could see the leaders as we hit town, but couldn't catch them. Exercising discretion, we went straight home and got on dry clothes. Actually, I didn't need to change because the new Elite II suit worked perfectly. Then we took the van over to the Copper Cliff Legion for hmaburgers and hot dogs. Since the kids were tired, we gave Biker our door prize tickets and went home early to watch the NASCAR night race at Bristol.

This was Heather and Tom's first experience with severe rain. They need to fine tune their rain gear and figure out how to keep their face shields from fogging (air flow), but they did quite well and learned some important things.
Posted by Jim "Skid" Robinson on 8/23/2008