Ride to the Wall - The Day Before

The Southern Cruisers Riding Club (SCRC) Chapter #418 Nickel Centre, under the guidance and leadership of their First Officer, Butch, have organized the Annual Ride to the Wall for several years. The ride proceeds from Sudbury to the Cenotaph and Wall in North Bay.

We have usually been out of town for this in past years. This year we're here. Further, Heather and Tom, members of SCRC #270 in Kitchener, decided to make the ride up here in support of #418. This is their first long distance ride alone.

Sandy and I decided to ride down to Parry Sound, 100 miles south of Sudbury, to meet the kids. It was hot and humid for the ride down and the new Tim's south of PS is the slowest I have ever encountered. 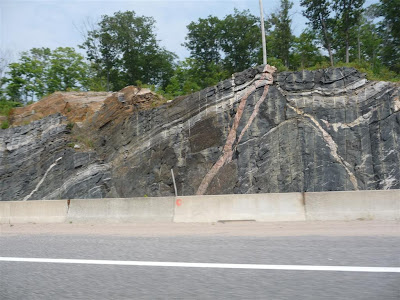 Apropos of nothing, rock cuts around Parry Sound are interesting.
Heather and Tom arrived on time. The last 50 miles had been their first extended ride on a four-lane divided highway. They had lunch and then we stopped at the gas station before we headed out. While they were fueling, I met another group of SCRC in the lot. They were from several chapters in Southern Ontario and were meeting Butch (SCRC First Officer) at the French River Trading Post, 60 miles further north. They headed out first.

Tom set the pace northbound while I brought up the rear. The ride was uneventful except for the part where I got annoyed at a car dogging it along at 90 KPH leading a line of cars (and us). Except for the passing lanes, where he accelerated to about 115 and limited the number of people who could get by. I finally jumped the line and got ahead of him as he hit the next lane. I got in front of him and slowed to 90, allowing all the other traffic to pass. Then I ran hard to catch Heather and Tom, who were at the front of the line that had passed.

At the Trading Post, we pulled in. The other SCRC riders were there as well as Butch (well known from the Freedom Riders) and his Second Officer, Cindy. We hung out with them and then, when it came time to ride, we followed the group back to Sudbury. 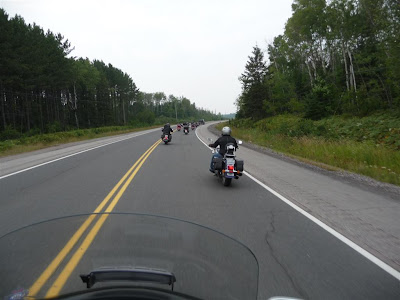 Heather (right) and Tom follow the other SCRC riders near Burwash.
When we reached town, Butch led the group into the city while we turned off on the Southeast Bypass and headed home for the night.
Posted by Jim "Skid" Robinson on 8/22/2008