It rained overnight. It rained again this morning. Some of us put on our rain jackets and walked to Dilbert's, where we found the place packed. After standing around looking lost, a man saving a large table for regulars who weren't showing up gave it up to us. I tried the short stack of blueberry pancakes and Polish sausage today and, unlike Furhead, was able to finish it. It rained hard on us on the way back.

After sitting in the shelter visiting for a while and checking the weather radar on Stewey's phone, Sandy and I took a nap in the camper. By the time I woke up, the rain had moved off to the south. A group of us decided to head over to The Cherry Hut in Beulah for supper. 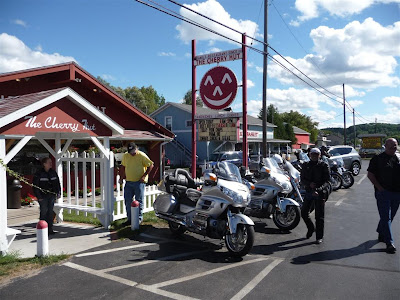 They set up a table for us in the closed section. Service was excellent. I had a cherry bacon cheeseburger and cherry pie with ice cream. Quite tasty.

On the way back, I led up Crystal Lake Road to M-22 and took M-22 with its curves north to Deadstream again. I was careful on the turn and saw the sand. Not quite sure how black sand got here since all the local stuff is sand coloured. 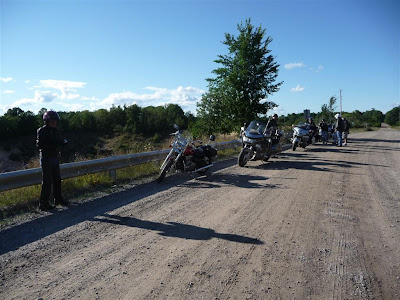 Scotty's lookout
From Honor, we ran straight back to camp. The sunset played off the low-lying clouds, making a pretty picture. We took down the awning before sundown so it would be stored dry and packing up would be easier in the morning. 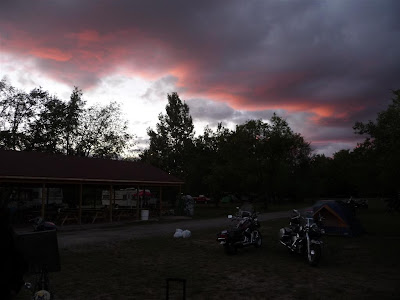 Sunset on the clouds at Cyclemoore Campground
The evening was subdued. We spent much of the time talking about then upcoming WWR '09 which had just been decided would be in Kentucky next June. There was a lot of enthusiasm and most planned to attend. Then it was off to bed in anticipation of an early departure by most of us tomorrow morning.
Posted by Jim "Skid" Robinson on 8/09/2008