It seemed to be a slow morning in the campground. Finally, Tomcat, Furhead, Sandy and I rode over to Dilbert's for breakfast. I had a meat lover's omelet with mushrooms added to it. Furhead had a short stack of blueberry pancakes and a Polis sausage. There was so much that he couldn't finish it.

There were no plans for the day so a few of us decided to ride the Leelanau Peninsula counterclockwise and put the word out. When it came time to leave, there were 17 bikes and I was the leader. I took a different route to get to M-22 in Traverse City, avoiding two trick left turn traffic intersections. It worked because the group ended up heading north on 22 without getting split up. 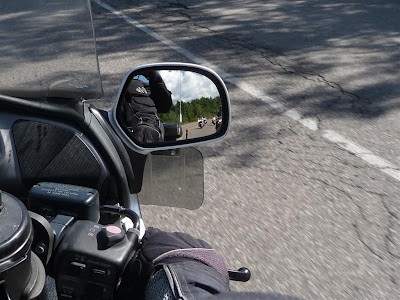 The group in the mirror
Traffic was surprisingly light. The only annoyance happened when we went through Northport on our side trip to Leelanau State Park at the tip of the Peninsula. Line painters had the main street blocked with their truck for no apparent reason, making it difficult to get through town. At the State Park, they hit us up for $6.00 per bike for Michiganders and $8.00 for out of state riders. The lighthouse and park were nice but, in retrospect, we probably could have skipped this stop. 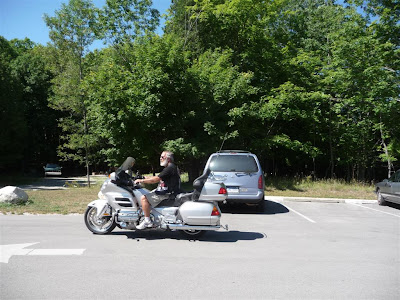 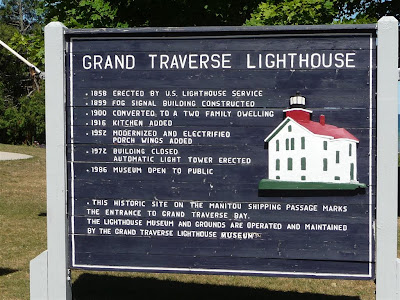 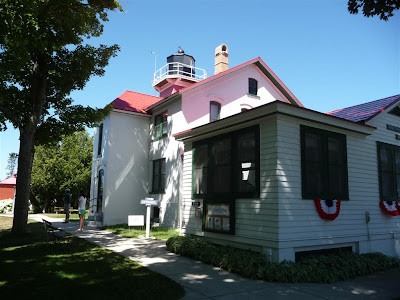 The actual lighthouse
Chunk and Jim left us at the park, opting to stop more for photos than we could handle as a larger group. The rest of us took the excellent section of M-22 southwest of Northport and reveled in the 30, 35 and 40 MPH curves. OK, some of us did. I didn't speed but I didn't slow down for the curves, either.

In Glen Arbor, we took SR 109 through Sleeping Bear Dunes National Park. It cost us another $5.00 each to take the Pierce Stocking Scenic Drive, but this was worth it IMHO. The drive is one-way and winds past several lookouts and picnic spots. Dee, Evan and Paul had done this yesterday, so they took their leave at this point. 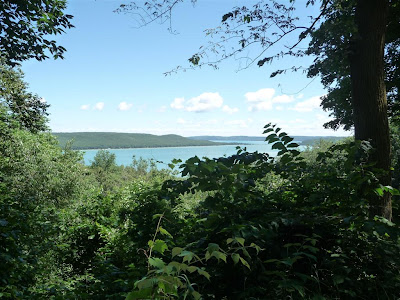 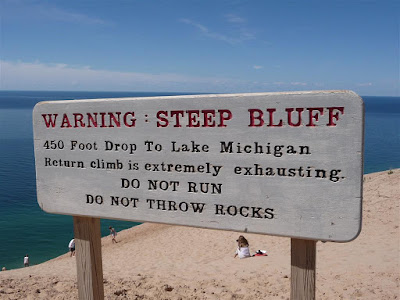 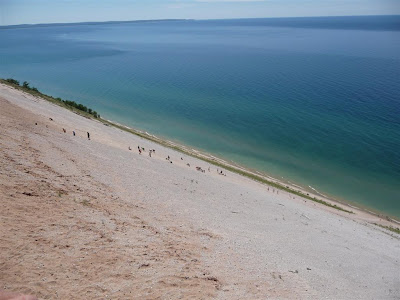 The Lake Michigan Overlook in Sleeping Bear Dunes
From Sleeping Bear Dunes, we moved a couple of miles south and stopped in Empire for a bit to eat. The food was OK but the kitchen at the Empire Village Inn was very slow. Some were still waiting for food when the first of us to order were finished and ready to go. Mouse and William took a shortcut back to get some food for Tomcat, who was watching Ruby the dog for the day. This brought our group down to 10.

I planned to take another shortcut but it looked pretty straight so I followed winding M-22 to an old favourite, Deadstream Road. The left onto Deadstream was about 130 degrees and looked good. There was a car coming but I figured a few of us could make it. I was almost through the turn when the back end suddenly kicked out from under the bike like it hit oil. I'm not sure what I did but my left foot dabbed and I think I steered right (into the skid). The bike came upright and I continued on, slightly shaken. In my mirror, I could see Boomer going wide in the turn.

Boomer later told me that it was a small patch of black sand on the black asphalt that almost gathered me up. It wasn't apparent until he looked closer after I slipped.

The rest of the ride back was pleasant and uneventful. There were a very large number of summer homes along Deadstream that had For Sale signs out front. I guess second homes are being sacrificed in these troubled economic times. 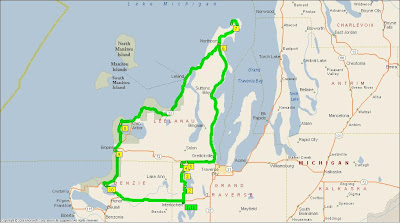 We kicked in more money for firewood this evening. Maybe we kicked in too much because they ended up starting THREE fires. Nothing like overkill:-)

Stewey arrived from Illinois after dark, telling us about two near misses with deer. He had a new tent that had never been set up before, so a few of us assisted. Red from Bemidji, Minnesota stopped by with a couple of friends on their way to a motel. It was a nice evening.

Around 1:30, Wrong Turn and I found ourselves calling it quits along with a very small group of others. Amazing how the party breaks up so early these days, but I guess it's a sign of the times.
Posted by Jim "Skid" Robinson on 8/08/2008