It was time to leave for Interlochen this morning and my bike chore list wasn't near complete. The trailer tires were in poor shape but hadn't been replaced. The oil wasn't changed. About all I got done was fix the malfunction of the Bushtec trailer plug, where I found a small rock stuck in the bike side plug. The other stuff would have to wait because it was time to go and see the folks in Interlochen, Michigan.

Sandy had the trailer packed yesterday so all that needed to be done this morning was to hook it up and leave. This put us on the road before 8:00 AM, running ahead of an east wind. Despite the tail wind, I have never been a fan of east winds because they always seem to bring bad weather.

We got to The Soo dry. When I phoned Mom, she suggested we stop in on the way back so we headed straight to the bridge. Wellington Street remains torn up and impassable, so I took side streets down to Queen. I was surprised to see that secondary streets in the Soo are substantially worse that those in Sudbury.

The border crossing took about 45 minutes. The line-up on the bridge extended back across the border, almost to the second peak. When we did get to the booth, the officer spent an exceptional amount of time punching things into the computer even though he didn't ask many questions. He did give us a document detailing the Western Hemisphere Travel Initiative and what US ID is acceptable at the border (not much use to us). He also gave us information on NEXUS, which is now in place at this crossing and has a new office here. It looks like it's time to enroll.

The ride to St. Ignace was interesting. There were two storms on the horizon ahead of us. Looking at the GPS vector, it was clear we would miss the one to the right but the one to the left was coming in from the west and looked like it might get to the Big Mac (Mackinac Bridge) about the same time we did. I checked out places we could hold up in St. Ignace for a while so it could pass, but we beat it there. Not by much, though. 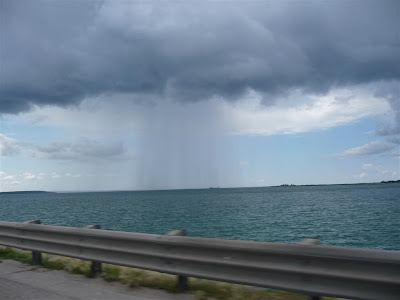 Rain moves towards the Big Mac as we beat it across
We caught a few drops as we reached the south shore and opted to skip US 31 in favour of riding straight south on I-75 to give the rain a wider berth. As we proceeded the 60 miles to Gaylord, another cell came into view. This one looked worse with all the manifestation of a severe thunderstorm. We slid by it on the west side, wet pavement and the smell of wet vegetation testifying to its recent passage. 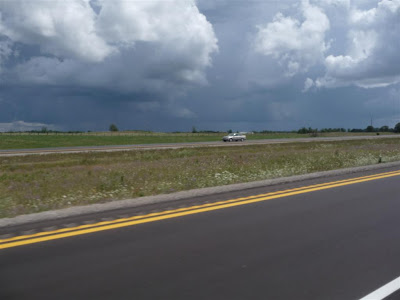 Storm cell east of I-75
After a quick bite in Gaylord, we headed west and southwest to Interlochen. We did get a few miles of solid rain from a cloud I didn't even suspect between Mancelona and Kalkaska on US 131, but otherwise got to the campground just fine. As we stopped at the one Interlochen traffic light, a red 800 Vulcan pulled up to the light from the south. Scotty! Good timing.

The campground had been rained on recently but the sand soaks it up immediately. There was a good crew there already when we rolled in and set up the camper. One very pleasant surprise was Jim (Wrong Turn), who decided to make the trip up from West (By God) Virginia at the last minute.. This was when we learned that Grandma's Kitchen, our usual breakfast stop, had closed down. Fortunately, Dilbert's Cafe opened up almost right next door to the campground. This was where we had supper before making a booze run to Ric's back at the intersection.

Another surprise when Chunk arrived from West Virginia. Jim and I helped him set up in the failing light. The bonfire was well laid out and the stars overhead were bright as we sat around and swapped tales. Many regulars and a few new faces. Sandy turned in earlier and I made my way to bed about 1:00 AM after Jim, Flip and I found ourselves to be the last ones up. 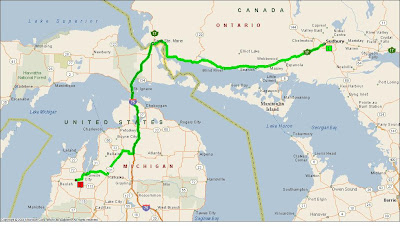