The Snowmobile Trail Officer Patrol (STOP) started in Sudbury in 1992 in response to a number of sledding fatalities, combined with police budget and manpower limitations. STOP Officers are volunteer Special Constables and Provincial Offences Officers empowered to enforce the Motorized Snow Vehicles Act (MSVA) in Ontario. I served with STOP from its inception until 2003, when I turned in my badge because I had lost interest in snowmobiling.

In mid-2007, I approached Normie, the Sudbury Area Coordinator,about getting re-instated. This would be a first for the Patrol and the Provincial Committee worked out a process. I had to rewrite the exam and undergo the new, more rigorous background check.

Due to circumstance I won't go into, the crew of trainees in Sudbury and yours truly haven't been sworn in yet. We hope this gets done soon but, in the meantime, we assist police and sworn STOP Officers in making snowmobiling a safer sport.

I am still riding the 1998 Skidoo MXZ 440 fan cooled sled that used to be Sandy's. It's small, light, underpowered and generally reliable. For the first time in several years, we had an excellent winter. There were many patrols and most of the people were riding safely and responsibly. 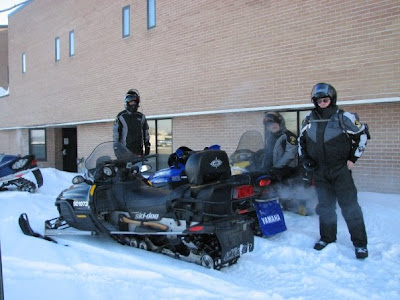 STOP Officers Ready For Patrol at -26C
Trevor G, Me & John O (Photo by Andrew H)
It's been good to get back out there. We know from both the hard statistics and the anecdotal evidence that the STOP and police presence on the trails are responsible for saving lives.

My last patrol was March 14th, when we had four days of +9 and the ice coating on my crusher dust driveway melted, effectively stranding the sled in the garage. While the riding in the city was done, they kept running the north end of our system for another few weeks.
Posted by Jim "Skid" Robinson on 3/31/2009