Heather had to work today but Tom did not. I headed over to McDonald's and picked up McMuffins and things for breakfast while Tom replaced the donut spare tire on his Hyundai. He and Heather blew a few days ago on the way home from work.

Kim called to say that she and Mike had come down with something last night and were now quite violently sick. Based on the description, it sounded like a food issue rather than a viral thing, which would be good because it would not be contagious and they should recover more quickly. Since they would be hosting us tomorrow and were obviously not able to go out grocery shopping, Sandy took down the list and said we would pick up the necessary items.

We headed across town guided by the GPS to find the Zehr's grocery store and managed to pick up almost everything on the shopping list. The only thing missing was Ensure, which we got next door at Shopper's Drug Mart, along with four Lottomax tickets. I normally shun lottery tickets, viewing them as a tax on people who don't understand probability. But the prize was maxed out at $50 million with a load of $1 million dollar bonus prizes so we figured that a long shot is better than no shot at all.

On the way over and back, I tried the new audio book. It was just fine but it seems Sandy either doesn't like audio books or doesn't like Ayn Rand. Either way, I will have to listen to this while she is sleeping in the passenger seat. That should still allow lots of listening:-)

Heather got home from work early.  After getting dressed up (a pretty limited exercise in  my case), we all jumped in the van at 5:30 PM and headed for Breslau. Zofia was laying on a traditional Polish Christmas Eve spread and had graciously invited all of us to join them. The Polish tradition features a selection of sweet and sour dishes. The only meat in any of the dishes is fish. One nice touch happens at the start of the meal when each participant takes a wafer and individually approaches each other person. They each break off a portion of the other's wafer and say some personal words. 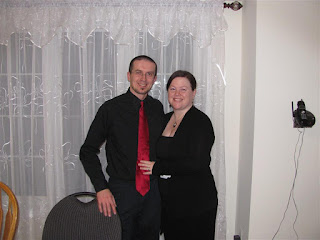 Heather and Tom dressed up for Christmas Eve 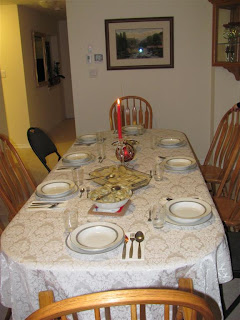 The table is set 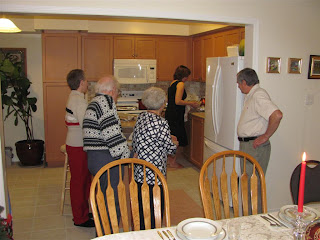 Zofia prepares before an appreciative audience 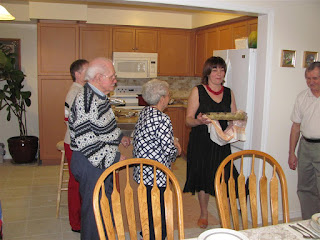 And here it comes
After the excellent meal, Tom's brother Greg and new wife Tyna stopped by. Santa delivered gifts to each person and we shared some stories. It was a memorable evening and a chance to see some of the special traditions Heather has married into. Thank you, Zofia and Stan, for your gracious hospitality.

We were back in Woodstock by 11:00 PM and watched a TV show on people who were creating those garish, over the top Christmas light displays for their home before turning in.
Posted by Jim "Skid" Robinson on 12/24/2010