We were up, packed and ready to roll by 7:00 AM. After saying our goodbyes to Heather and Tom, we were rolling by 7:25 under clear skies. I planned to avoid Toronto because it would still be Monday rush hour when we got there. The slower route up Highway 24 looked preferable. Than Sandy pointed out that many of the Hogtown people would be taking Monday off to compensate for Boxing Day, so I took a chance and followed the 401 all the way to Highway 400. Sandy was right. There was less traffic than on a typical weekend.

We stopped at the King rest service centre for a break and then rolled on to the Tim's south of Parry Sound (I think I will start referring to this as the Seguin Tim's since the Seguin Trail - pronounced See-goo-in - runs right past it) where we met our friend John from Ottawa. Long time blog readers will remember John was the unfortunate soul who took the spike through his tire in Hendersonville, NC on our ride to Georgia a few years back. John usually visits family in Sudbury over Christmas and stops by but we weren't home. Today, he was on his way from Sudbury to visit his brother in Hamilton so we arranged this brief meeting. 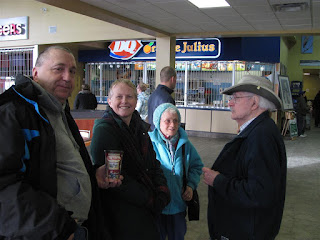 John, Sandy, Jan and Harry at the Seguin Tim's
We made it home without incident by 12:37 and found no new snow since we had left.