We suggested Heather's Christmas idea to Sandy's parents, Jan and Harry, when we got back from the last trip. They liked it so we headed south this morning to all see the kids for the holidays.

I was up at 6:00 AM. One of these days, I may learn to pack the night before a trip but I doubt it. By 8:15, we had picked up Jan and Harry and were headed south in a minivan loaded with people, luggage and Christmas goodies. We made one stop at the Tim's south of Parry Sound and another at the service centre in Vaughn where we had lunch at another Tim's. Then it was on to the 401 and west to Cambridge. I took a detour down Townline Road to show the in-laws the large homes on Avenue Road.

I noticed the Compass signs had the message "Driving while suspended risks vehicle impoundment". Risks? Impoundment? I have some strong thoughts on this matter and believe that anyone driving under criminal suspension, usually for impaired driving and often without insurance, should face a mandatory permanent seizure of the vehicle. After all, the court suspended their licence for dangerous behaviour and their choice to continue driving demonstrates a total lack of respect for the law and other drivers on the road. I hope that, after I do suitable legwork, Action Sudbury will support an initiative to bring this proposal to the government.

We arrived at Kim's around 2:00 PM. Jolene was at daycare and Mike was still at work so we had a chance to visit with Mom and new baby Robyn for a while before they got home. 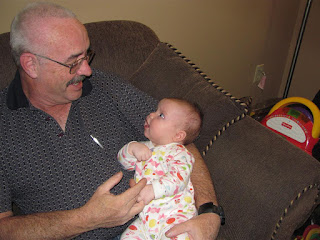 Proud Grandpa and Baby Robyn
Mike got home with Jolene about 5:00 PM. She was all smiles as usual. Although her birthday party was a couple of weeks ago, she was actually born on this date two years ago and we brought her a few gifts. 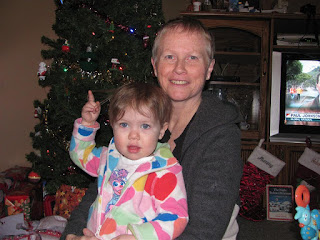 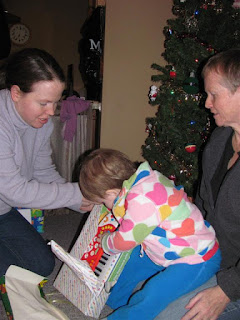 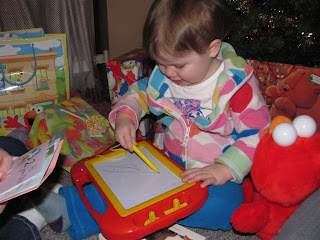 Modern and simpler version of our old Etch-a-Sketch 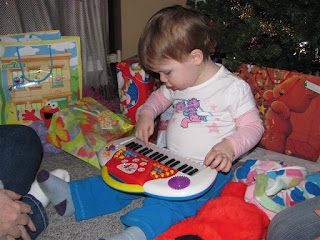 Is this the start of a musical career?
After a while, we moved on and met Tom and Heather at the TOA restaurant in Woodstock where we had supper and had fun with an animated conversation with the server and some of the other patrons. Then we went on to the house where we got Jan and Harry set up in the 2nd bedroom while Sandy and I moved onto the futon in the 3rd bedroom/office. 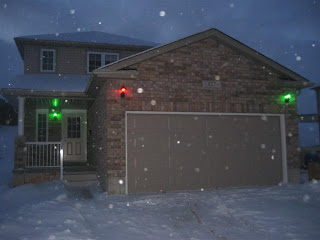 Heather and Tom's house - Woodstock Ontario
(Photograph by Tom G)
We watched TV for a while and visited. I discovered on the CNN site that audible.com was having a free trial offer download of an audio book in .aa format. While many audio books exist in MP3 format, the Zumo requires the .aa file type to take advantage of the audio reader features like bookmarking. I downloaded an abridged version of Ayn Rand's Atlas Shrugged narrated by Edward Herrmann because I thought it was time to revisit this great work. The abridged version, at 11 hours long, was only half as long as the unabridged version and would refresh me on all the significant details.

Eventually, we all toddled off to bed.