By the time I got up, Tom had headed over to the local storage facility where much of their things have been kept since they left the condo. When he got back, we headed one exit back on the 401 where all the restaurants and stores are located and picked up some things at Canadian Tire. Then we went on to the storage facility and crammed as many of the small items as we could into both vehicles. Returning to the house with breakfast from Tim Horton's, we unloaded and then prepared to go and pick up the U-Haul truck Tom had reserved.

While we were out, the excavator operator had started to take the pile of earth in the back yard and back fill the freshly poured foundation next door. Watching this guy work for a bit, I developed an appreciation for his skill at working the large machine in close quarters. 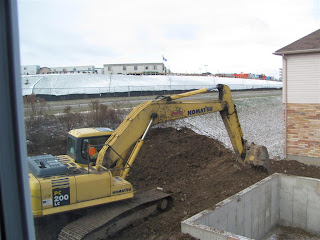 Excavator working in the back yard
I drove Tom in search of the U-Haul shop which he thought was out in the country off the first exit from the 403. At the exit, we turned left and proceeded a couple of miles until we saw the 401 crossing over ahead of us. Tom figured we had turned the wrong way, so I was in the midst of making a U-turn when I saw orange and white U-Haul trucks across a field on the cross road ahead of us. Abandoning the turn, we continued on and found that, while we had in fact turned the wrong way for where the business used to be, they had just moved to this new location. Talk about luck.

The luck did not seem to be holding when we found that the 17' truck Tom had reserved had been taken out of service the previous day. All they had were two 26' units but the lady let us have them for the price of the smaller unit. I also insisted we rent a fridge cart because of some of the heavy items we had to move. 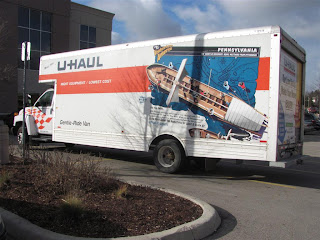 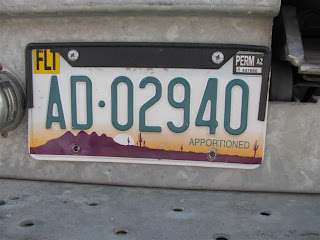 Strangely, the truck was registered in sunny Arizona

Tom followed me back to the house where I left the van and we took the truck back to the Tri-Cities. Sandy and Heather stayed behind to wait for a delivery from Sears and a visit from the Rogers cable installer. Our first stop was The Brick furniture store in Kitchener, where we picked up an electric fireplace. Then we went on to Zofia's in Breslau where we loaded a washer, dryer, couch, love seat, box spring, mattress and containers of clothes and other small things. Considering there were just the two of us guys plus Zofia, we did pretty well getting it all stuffed into the truck. The last stop was at Rona's in Cambridge where Tom picked up insulation and drywall to finish the inside of the garage. About now, we realized that what we thought was bad luck in not having the smaller truck actually worked in our favour. I don't think it would all have fit into the 17' unit.

Back at the house, I was thrilled to see that son-in-law Mike had showed up. The two younger guys did the heavy lifting getting things into the house. Sears had been by and dropped off the fridge, stove, dishwasher and TV. Unfortunately, the master bedroom suite would be delayed for a week or so. On the plus side, the massive fridge fit into its space, but just barely. The Rogers installer was also there hooking up the cable TV, Internet and phone. (Two out of three ended up working but the phone ended up requiring a visit at a later date by a regular installer who pointed out the errors made by the contract guy.) 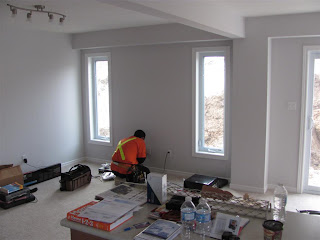 Rogers installer - we thought he knew what he was doing
About the time that the truck was empty, Tom's two brothers arrived so we headed back to the storage building for the rest of the stuff. After I caught a corner of a futon that swung open into my sternum, causing me to wonder for a bit if I had broken a rib or two, I played a relatively minor role in the loading. When we were done, there were only a few glass items left to be picked up tomorrow. Back at the house, the young guys again emptied the truck and then we took the it over to the TOA parking area for the night.

Heather or Tom ordered pizza which we enjoyed as things got sorted and assembled. By the end of the night, we had an electric fireplace and large screen TV functioning and were connected to the Internet. Zofia also stopped by with some more things and helped start the unpacking process. By the time everyone headed out, the snow had started to fall. Large fluffy flakes were landing in Woodstock but Mike called back to advise that the 401 to Cambridge was snow covered and experiencing whiteouts. The northwest wind was coming in across Lake Huron and Georgian Bay bringing heavy lake effect snow, while Woodstock got a break because it was in the shadow of the Bruce Peninsula.

Sandy and I had a bed but no curtains and, by virtue of the slope in the back yard, looked directly out on the sidewalk on Finckle Street. This was no problem for an exhibitionist like me, but Sandy was careful changing.
Posted by Jim "Skid" Robinson on 12/03/2010