We are heading south to help Heather and Tom move into their new house in Woodstock, about 30 miles west of Waterloo. Since they sold their Waterloo condo in August (they got virtually their asking price four days after listing it) they have been living with Tom's parents. That started out at their home in Waterloo, not far from the condo, but moved to Zofia and Stan's new home in Breslau in September. By now, I figure they will be happy to relocate to their own castle.

Sandy and I set out from Sudbury this morning after I went in for an ultrasound of my arteries to make sure that I didn't have an aortic aneurysm. I had no symptoms but my doctor figured it would be good to check it out at my age. "At my age". Those are three scary words. In any case, the lab tech told me my arteries were fine and seemed exceptionally clear considering i have been a smoker for 40 years. We got underway by 11:00 AM under partly cloudy skies with a little snow on the ground. Both of us were still suffering from colds and I was on antibiotics for the bronchitis mine had turned into  but we felt (hoped) we were on the road to recovery.

We encountered the usual snow squalls on the way down, a lake effect feature of the winds blowing across Georgian Bay and then meeting the shore. As the snow started to accumulate on the road south of Parry Sound, I slowed down. Unfortunately, a couple of other drivers didn't and put themselves off the road. 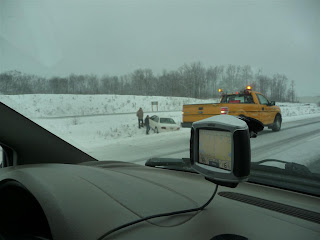 Driver off the road near Moon River 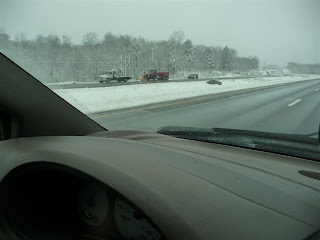 A second driver who forgot how to drive in winter 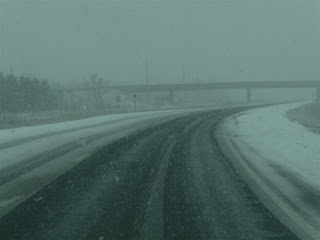 Driving conditions near Waubaushene
South of Waubaushene, the road improved and we motored right along. Because of the time of day, I elected to follow the 400 all the way to the 401 in Toronto, the fastest route if it isn't rush hour. I won't go into the difference of opinion I had with the bozo in the blue Durango who figured that he had some kind of divine right to hog the left lane, but I did make my point to him. We arrived at Heather's office in Ayr at 4:00, picked up the keys to the Breslau house and then went back and picked Tom up in Cambridge when he got off work at 4:30.

From Cambridge, we stopped at the Breslau house where Tom picked up a few things and then we went on to Woodstock. The new house looked great and I really like the open concept layout. I think the double garage was a wise choice. They are still building on both sides and there was a huge pile of dirt in the back yard from the foundation excavation next door.  Landscaping will have to wait until spring but the interior of the house is very nice.

When Heather got home, we went over to the TOA Family Restaurant. I finally tried their chicken fried steak. This is the only place in Canada I have ever seen it on the menu, probably because it caters to American truck drivers. It wasn't the best I have had, but it wasn't bad, either.

Back at the house, there was no furniture. Knowing this, we brought our air bed down from Sudbury and set it up in the second bedroom while Heather and Tom slept on the floor in the master bedroom. Since there was no TV or other entertainment and expecting a busy day tomorrow, we turned in early. 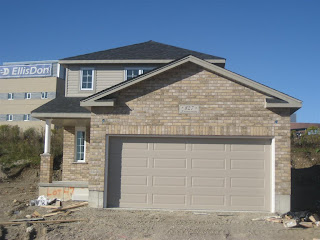