The End Of A (Personal) Era

My first ride on a snowmobile was brief. It was 1963 and my father was testing a new type of machine he hoped would make life easier for his exploration people in the winter bush. The Snobug was a single ski contraption with  an engine in the rear. The operator sat inside it on a bench seat. I got a short ride around a field.

In 1971, my mother bought a 10 HP Skidoo Olympic that I rode from time to time when I got back to Sault Ste. Marie for visits. Then, in 1978, Sandy and I bought a pair of 22 HP 275cc Arctic Cat Lynxes. While the Broder-Dill Snowmobile Club maintained a small network of trails heading from the south end of the city to the Killarney Road, that was about it for organized trails nearby. Once a year or so, a few of us would take a compass and map and, using topographical maps would try to get from here to somewhere else.  It was a challenge.

In 1988, organized snowmobiling took off big time in Sudbury. I fell in with the leaders of the new Sudbury Trail Plan Association which had been founded by a group of visionaries led by Don Lumley. Large grooming machines and interconnected trails saw the association grow to include eight local clubs responsible for a network of over 700 miles of trail. I upgraded to a Polaris Indy Trail 488cc Sno-Pro sled (designed for cross country racing) and threw myself into helping the system grow and improve.

STP was a revolutionary umbrella association that allowed the eight united clubs to accompish far more than they could individually. We went from one Bombardier BR60 groomer to a whole fleet of Tucker Sno-Cats, tractor conversions and Bombardier BR160 and 180 machines costing over $100,000 each.  I started as vice-president of the association and then, after I spearheaded a reorganization, VP - Operations before replacing Don as President from 1992 until 1995. I also served as District 12 Governor on the Ontario Federation of Snowmobile Clubs provincial board during 1994 and 1995.

In 1992, we started an experiment to improve snowmobile safety by training volunteers as Special Constables to augment police snowmobile patrols under the innovative Snowmobile Trail Officer Patrol (S.T.O.P.). I represented STP as an Operational Manager through the pilot project phase and then served as the first OFSC Provincial Coordinator when the program was expanded, finally stepping down in 1999.  The last few years, partnered with OPP Sgt. Lynn Beach, was a very rewarding time as we carried the Gospel of S.T.O.P. across Ontario..

At our peak, our family owned four operating sleds but the more I got involved in organizing and administering, the less riding I did. After backing away from the work side of things, I discovered the hunger to ride was substantially diminished. I ended up with one snowmobile, a small '98 Skidoo MXZ 440 fan that had belonged to Sandy before she decided she didn't want to ride any more. In 2007, I applied to be reinstated as a S.T.O.P. Officer on Normie's team to see if I could recapture the old feelings. I enjoyed my time back on the trails even though my sled was by far the smallest and slowest one out there.

But recently,I found the spark was gone again. Last season, I missed the first part of the season due to family issues. Afterwards, the changes proposed to the S.T.O.P. Program by the OPP and the unwillingness of the OFSC to take a stand in defence of the vision we had built the program around, completely sapped my motivation to stay involved with a sport that I have enjoyed for so much of my life. This, coupled with the fact that this was an activity that Sandy didn't share with me, convinced me it was time.

I resigned from S.T.O.P. at a regional meeting last month and let it be known that my last machine was up for sale. I hadn't even advertised it when I got a call from Tim, who said he had heard from Normie that I had a sled for sale. It was a bit of a blow to my ego to hear that he was looking for one for his 12 year old daughter, but it was realistically an excellent machine for her.

Last night they came over, looked at the machine and gave me a deposit. Today, they brought a trailer by, loaded the Skidoo on it, paid me the balance in cash and I waved goodbye as my last link to the snowmobiling lifestyle rolled away. 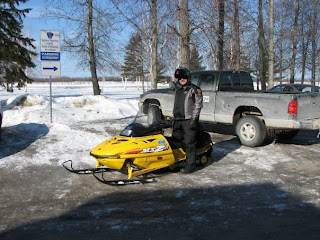 The '98 Skidoo MXZ 440
Life is full of changes. We do things for a while and then, when they don't satisfy us any more or circumstances make them impossible, we move on to other things. This is another one of those times. While I may miss riding over the packed snow from time to time, I can always rent one for a few days and get it out of my system. And now one less thing ties me to Sudbury and the Frozen North.
Posted by Jim "Skid" Robinson on 12/09/2010