Today is the 69th anniversary of the attack on Pearl Harbor, the Day That Will Live In Infamy.

Schools were closed for a second straight day even though the snow here was nothing like what London was getting. We left Woodstock before 9:00 AM and rolled through Toronto onto Highway 400 North. Despite the heavy snowfall in SW Ontario, there was nothing on the ground as we passed through Halton. I'm not sure what the Torontonians were sniveling about because we didn't see any evidence of the heavy snow the television news had been reporting. At least the mayor didn't call the army out this time. Of course, the Mayor of Toronto doesn't have the authority to mobilize the army but Mel Lastman did it anyway a few years ago after a heavy snowfall. And the army responded. Strange things are often done in the Big Smoke.

We stopped at the service centre near King Road and I installed a new rear windshield wiper. The old one had virtually disintegrated. Then we started up the 400 as conditions deteriorated and the accumulating snow made the roads greasy. No problem as long as everyone slows down and drives accordingly. 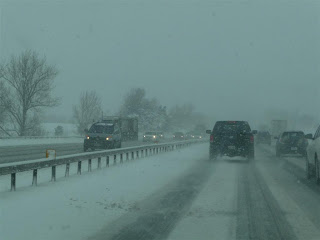 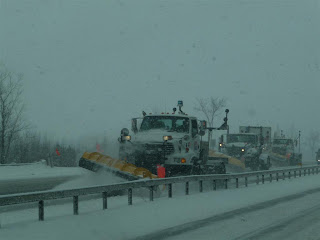 A gang of snowplows
The snow was worst around Highway 89 but tapered off once we got north of Barrie. The ski hills at Mount St. Louis were making snow like crazy and I can just imagine the smiles on both the operators' and skiers' faces.

One thing I noticed on the way back (I should have noticed it on the way down) was that the old Petro-Canada gas station and adjacent liquor store trailer at the Highway 64 turnoff had been leveled. Another familiar landmark gone.  Over the years, we have seen one gas station after another on Highway 69 disappear. Now there are just two left on the 100 mile stretch between Parry Sound and Sudbury.

On the way up, it looked like the lakes were freezing well. It is important to snowmobilers that lakes and swamps freeze and that the ice thickens before they are covered with an insulating blanket of snow. Otherwise, they will face a winter of slush and unsafe ice. So far, so good.

We reached the Sudbury SE bypass at 2:10. Unlike some areas in the south, there was very little snow to be seen. The new hotel they have been building on RR 55 has now been unveiled as a Marriott TownPlace Suites. I've never heard of this brand before, but it looks very nice. After years of having no new hotels in town, they are now rising up everywhere.

I still feel pretty rough from the lung infection but am hoping it clears up soon.
Posted by Jim "Skid" Robinson on 12/07/2010