We got off to a slow start today. I read my Kindle for a while after waking up. We didn't leave until 7:30.

As I went through the NY Thruway toll booth just across the state line, I reflected that my new EZ-Pass transponder should be waiting at home. This one is for a pickup truck and one-axle trailer so I won't have to go through the manual toll booths in NY to allow the operator to set the vehicle class.

We stopped at the Angola Service Center for the first bathroom break of the day and so I could top the tank with cheaper US gas. Although prices here are above what they are further south, they are still way below what we pay in Canada.

The exit to the Peace Bridge off I-190 in Buffalo is a mangled mess of construction, but we found our way to the border. Traffic lines were light but I still reported to the NEXUS lane. We got the usual questions. How long away, do we have alcohol, tobacco or firearms and what's in the trailer? We were on our way in less than a minute. 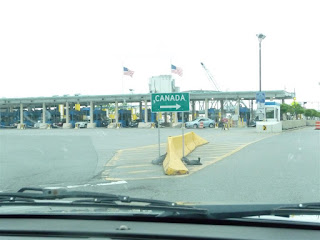 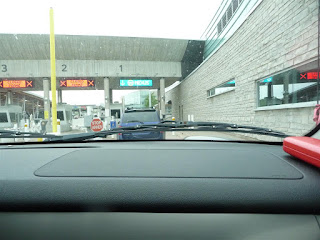 QEW traffic started out light, considering it was Victoria Day, but it started to get a little weird after Niagara Falls. The temperature, which was 20C at the border, had dropped to 13C by the time we reached St. Catherines. This was a big change for a short distance. As we approached Burlington, I decided I didn't want to be bothered with traffic and took the ramp to the Express Toll Road 407, opting to pay the exorbitant fees to bypass Hogtown. It was uncongested all the way to 400 north.

Once we were heading north on Highway 400, we spotted what looked like an OPP blitz on the southbound side. Three cruisers were sitting at Major Mackenzie Drive, leading me to believe there was a spotter somewhere north of them. This is not unusual for a long weekend as the mass of cottagers head back into the city.

We stopped at the King City Service Centre to get lunch to go. Sandy got three cookies while I took a late breakfast sandwich combo (cheddar sausage biscuit). Plus coffee. Always coffee.

Southbound traffic was still light up to Highway 89, where the truck odometer rolled over 90,000 miles. That means we have put almost 60,000 miles on it in a little less than three years. Not bad when you consider that we only travel during the summer months. It hasn't been a trouble free vehicle but I do like driving it.

As we approached Barrie, the southbound traffic picked up and then jammed up. It is one of the perks of living in the north that we can see these masses of stopped vehicles while cruising by the other way at highway speeds. 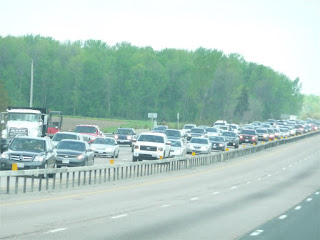 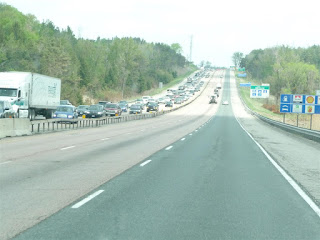 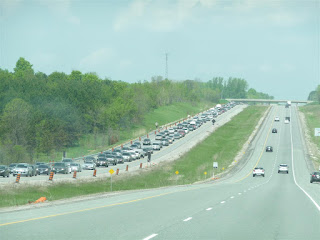 We stopped at the Tim Horton's south of Parry Sound where it was crazy busy. Even north of Parry Sound, the southbound traffic was solid indicating that the citiots from the Big Smoke are traveling further afield in search of weekend adventures. Going northbound towing the trailer, I once again realized that traveling the 90 KPH speed limit on two-lane Highway 69 was staking one's life in one's hands as impatient drivers take risks to get by and maintain their twenty-over pace. 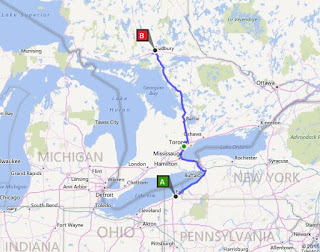