The MS Society of Canada, Sudbury Chapter 2015 Carnation Campaign ended yesterday. We sold 4,000 flower pots and delivered 3,000 single stem blooms over three days and I was pretty well burnt out by the time it was over. I needed this trip to Maggie Valley, NC for the annual South East VROC rally (SEVROC). More to the point, I needed to see my VROC family, especially after we had to cancel Texas. Sandy felt the same way.

I had loaded the bike at 10:00 PM on Friday night and we packed last night and early this morning. There was a fine misty rain falling as we pulled out of the driveway at 7:40 AM. 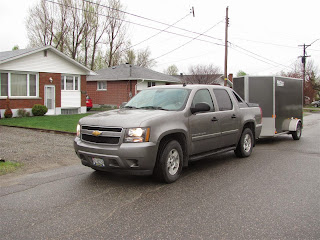 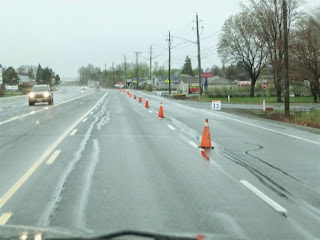 Lanes blocked for the annual Walk/Run For Diabetes marathon

The skies were clear and the ground was dry when we stopped at McDonald's in Parry Sound. They have these nice long lanes in the parking lot for trailers, RV's and buses. I don't know why some people find a need to park their cars there. Rebels without a clue, I guess. 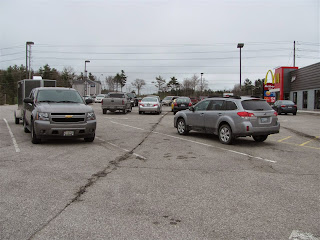 Two ladies parked this crossover in the long vehicle spot

The rest of the drive to Toronto was uneventful. On Highway 400, I saw my first Porsche Cayenne diesel. I had no idea they were making these with that type of engine.. 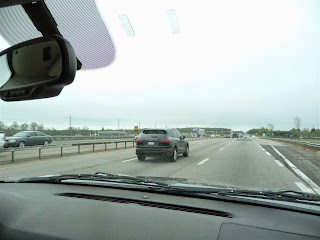 We stopped at the King Service Centre and got a bit of lunch. Sandy had a Tim's grilled cheese panini but wasn't impressed. I had a chicken ranch wrap without the ranch. Much easier not to end up wearing some of my lunch that way.

I did have another question on this leg. Why do some people feel compelled to merge and then accelerate? If they would accelerate and then merge, traffic would flow much more smoothly.


There was blue sky all over Toronto. Since it was Sunday morning, there was no point in wasting the shekels on a 407 toll charge, so we moved on down to the 401 West. After leaving Parry Sound, I had given up trying to actively drive for optimum fuel economy. Instead, I selected Tow/Haul mode, set the cruise at 65 MPH and let the truck do its own thing. Surprisingly, I got some of the best fuel mileage I have ever had.

The 401 was good and the 403 to Oakville started out similarly. Then we met a wall of water. We could even see it coming. I slowed to 40 MPH and put my four-way flashers on. Despite the reduced visibility, this was a comfortable pace. We were out of it by Oakville, where we met the usual stopped traffic as the 403 merged with the Queen Elizabeth Way (QEW). They have added HOV lanes through that stretch, but every time there is an exit things ground to a virtual standstill while folks in the HOV tried to cross three other lanes to get off. 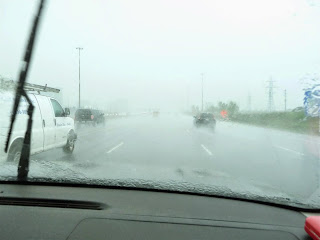 We made it to the Burlington Skyway at less than the posted speed limit. There, we encountered fog and some lighter rain. Traffic was also slow through Hamilton and Stoney Creek but picked up before we reached St. Catherines. 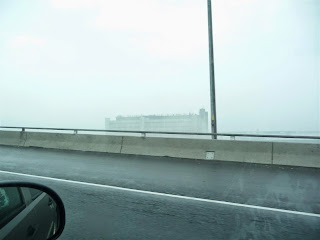 Fog off the Burlington Skyway 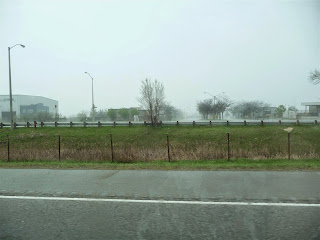 I remembered I had to call for a motel from the Canadian side since my US TracFone was stolen out of the truck last winter. The Grove City, Pennsylvania Super 8 was now our destination for the day.

There was another black cloud south of us as we approached Fort Erie. The trucks on the Peace Bridge were backed up to the Canadian side but the centre lane was clear for US bound cars. We had to wait in the plaza for a bit because it is awkward to take the trailer through the NEXUS line here. The agent asked two easy question. Where are you going and why? Then he wished us a good trip without even looking in the trailer. 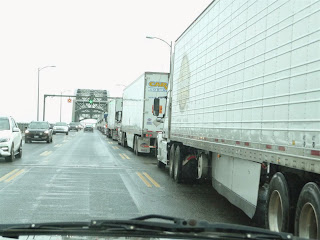 Truck traffic on the Peace Bridge

Heading west on the NY Thruway, there were black clouds and lightning bolts ahead. We hit another wet wall and it was back down to 40 MPH with flashers on. I was surprised how many people were running in the blinding rain with no lights on whatsoever. This storm abated by the time we reached the Angola Service Centre for cheaper US fuel. 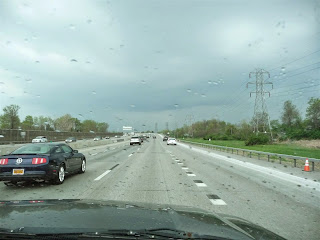 Dark clouds ahead as we approach the Thruway 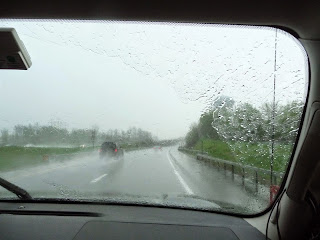 The worst was over

It was warm and dry in Erie, Pa when we stopped at WalMart for water and a new TracFone. Since I already have an account that needed to be reinstated, I will need to call them to get this one set up, hopefully from the motel land line this evening.

South of Erie, we encountered yet one more wall of rain. This went on almost to where I-79 crossed I-80, or about six miles from our destination. Once again, 40 MPH and flashers until it lightened up, and then I stuck to 55 because of the trailer. 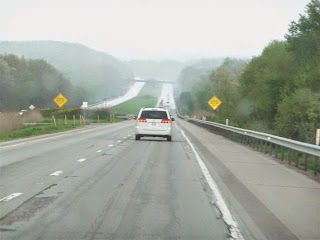 You can see where the rain starts

We stopped at Subway and got a ham and provolone (no Swiss cheese down here) sandwich to split at the room. Then we got checked in and I started to work on blogs and other days end tasks. The one thing that didn't get done was getting the TracFone working because the entire motel phone system crapped out. Oh well, hopefully tomorrow.

We covered 500 miles today and have over 500 to go tomorrow. We'll get an early start and, hopefully (I'm using that word a lot), we will be having supper in Maggie Valley with some friends tomorrow night. 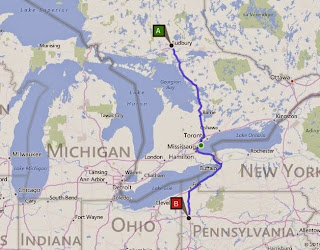 This blog is awesome! I'll check in again for sure. Have fun you 2 : you work so hard.... time to play hard!