Cheap B was leading a ride to his new house down south of Franklin today, while Willie Wonka and the Lovely Carlene had to ride down to South Carolina on business. Rather than have to decide which ones to go with, Sandy and I opted to stay put for the day and catch up on some things that had fallen behind.

We ate breakfast for the first time at Pop's Eggs and Grits, a brand new restaurant adjacent to our motel. They were having a few teething pains but the food was good and the folks were friendly. 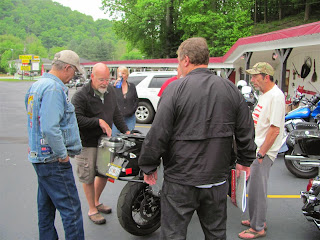 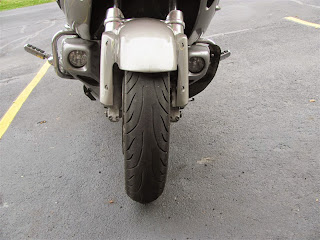 Wrong Turn broke off a lower deflector in the twisties 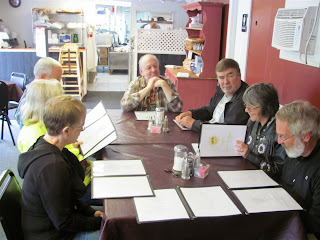 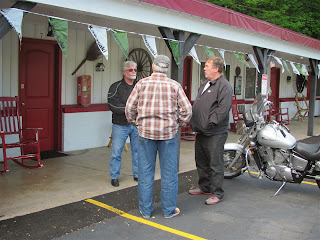 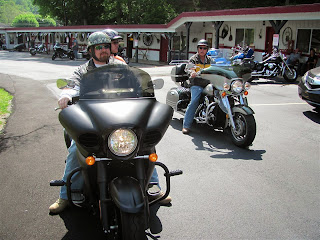 Jason, Tracy and Butch waiting for Teresa before heading for the Pisgah Inn 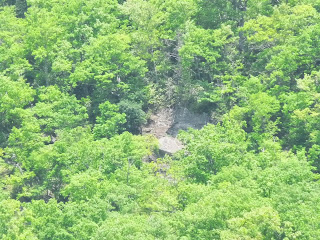 There is a white goat way up there

Joker had already showed up when Rabbi arrived in his Miata. I'd like one of these nimble little cars some day. Before we knew it, Kudzu joined the mix. I was blogging, with breaks to visit with the new arrivals. I got the final blog post up at 3:25 and decided that the bills wouldn't get posted today. About that time, Slammer rolled in. 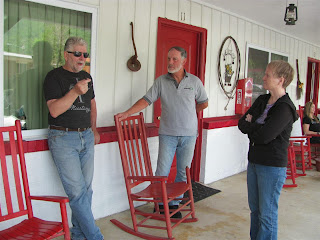 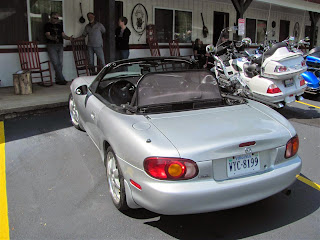 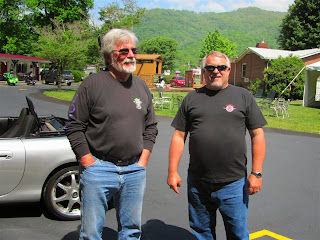 Joker and EZ, two people we first met at Suches 1999 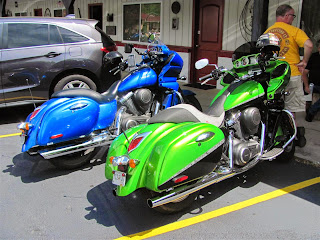 Kawasaki has some vibrant colours these days 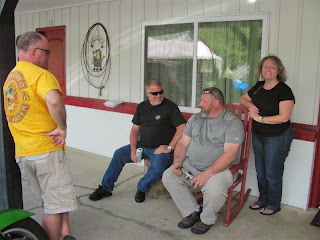 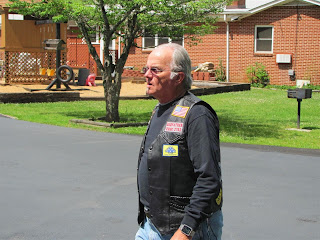 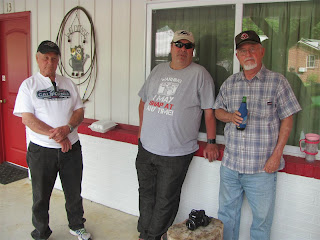 For entertainment, we got to watch a master at work. Wompus himself installed a Wompus Rack on Cargo's Vaquero. They had to provide shade because Wompus doesn't work just anywhere. 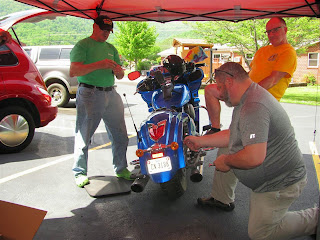 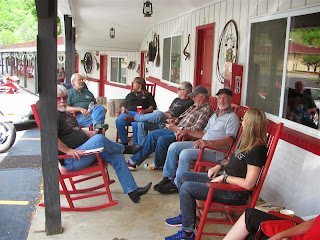 The rocking chairs got a real workout this week 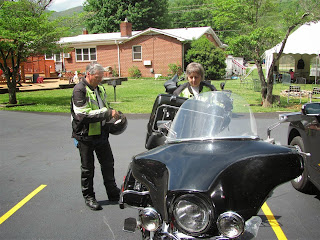 Willie Wonka and The Lovely Carlene back from South Carolina 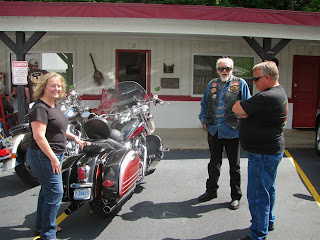 The Friday night Meet & Greet was at The Rendezvous Restaurant located in the Maggie Valley Inn. Willie Wonka and The Lovely Carlene went with us in the Avalanche. We had to compete for parking space with a gazillion Chev HHR's because this was their end of town this week. Jax had set up an on-line signup sheet and 45 people had indicated they would be there, so he asked them to set up for fifty. When we got seated, sixty people had walked through the door. The restaurant management quickly pulled out more tables and chairs and accommodated everyone. 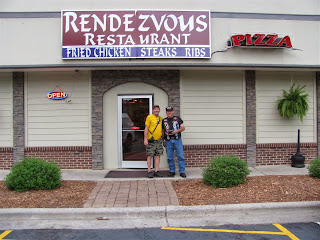 Wonka and Jax at the Rendezvous 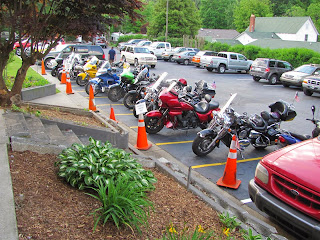 The parking situation was partly alleviated by a motorcycle only section 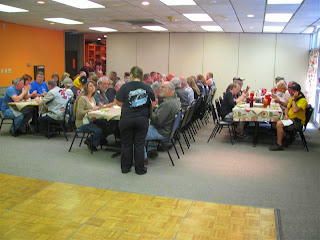 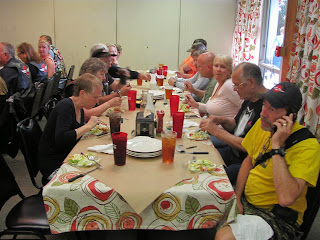 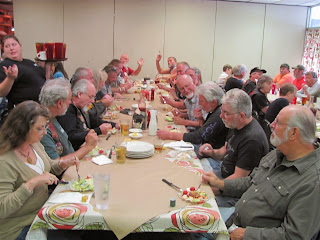 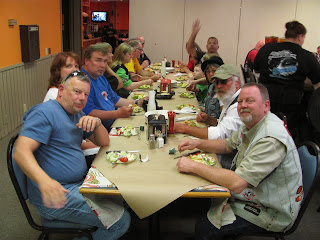 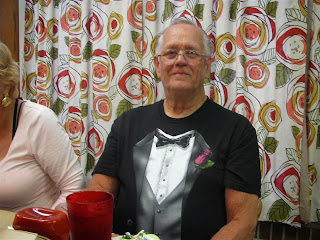 Bass Man thought it was a black tie event 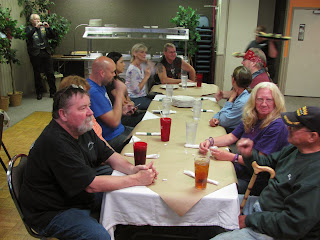 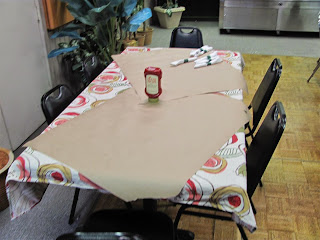 And one just in case someone else showed up

Dining was family style. They started with salads, then brought big plates of breaded fish, fried chicken and ham to the tables accompanied by green beans, fried okra (not bad), mashed potatoes and mac and cheese. Dessert was strawberry shortcake. Jax did another fine job organizing the meal, just as he has organized everything else this week.

While we were finishing up, Jax got a call from the motel to tell him that someone was looking for us. We headed back and found Tony D, late of Indiana and previously of Arizona, waiting for us with his new (to him) Honda ST 1300. 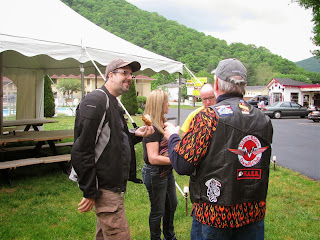 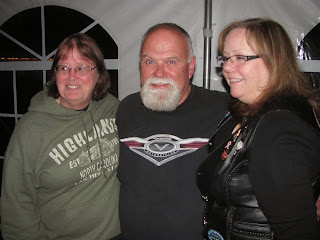 Mikey is the meat in a Linda sandwich

As the evening went along, some groups formed and talked about everything under the sun. Music was playing in the big tent where Mikey and Linda had been selling raffle tickets for the draws tomorrow. Crystal and EZ had to leave for Ringgold early in the evening so we said our goodbyes to them. 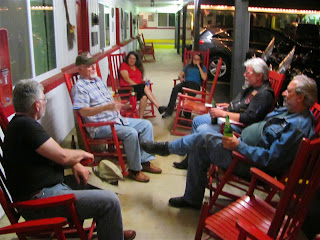 I ended up in a group that included Rabbi, Joker, Slammer, Cargo, Badger, Jax, Susan and Scooter. Talk was lively and a bottle went around a couple of times, although the consumption rate got lower and lower. Then Joker got a big bag of potato chips and we noted that we were now more interested in junk food than booze.

I am headed out with a couple buddies on Friday 22nd to enjoy some riding.