We rolled south out of Grove City at 7:30 AM under clear blue skies. The trip down past Pittsburgh was uneventful, although traffic was slow going up the big hill on the south side of the Ohio River. 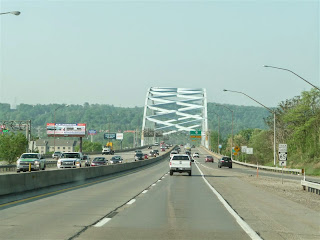 I-79/I-70 through Washington, Pennsylvania was torn up in a big way, but we made it through without much delay. Crossing into West (By God) Virginia, we stopped at the Welcome Center for a bathroom break. 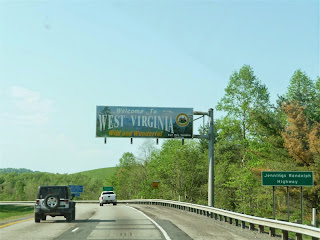 In Sutton WV, we pulled off for fuel at a Pilot station. As I stopped at the end of the off ramp, the low fuel light came on. That was perfect timing.  The temperature readout in the truck said 28C. Then we went over to the McDonald's for food and found a special lot for long vehicles. Sure enough, some twit parked their car crosswise in this space, even though there were many car spaces available in the regular lot. Note: this Mickey D's had the worst coffee I have tasted in many years. 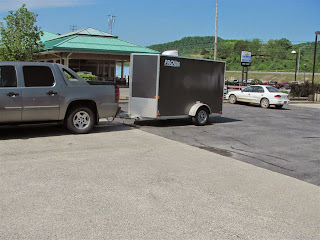 Trailer and twit parking in Sutton

South of Sutton, we exited on US 19 and followed the Mountaineer Expressway through Summersville and Fayetteville to Beckley where we rejoined the Interstate Highway system on I-77. As we approached the Virginia state line, Sandy said she didn't need any more pictures of the tunnels but she took them anyway. 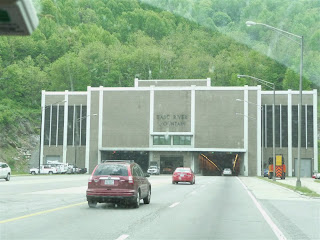 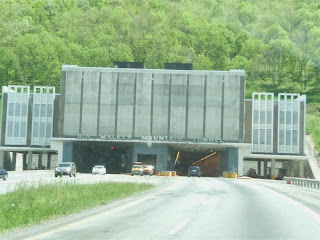 Gas at the Travel Center of America truck stop in Wytheville was $2.319 but we didn't need fuel yet. We changed over to I-81 South (actually, more west) and found we still had a headwind. As we passed Mountain Empire Airport, with its ridiculously sloped runway, we actually got to see an airplane taking off for the first time. It was going up-slope and took a long time to get airborne after the front wheel came off the ground. 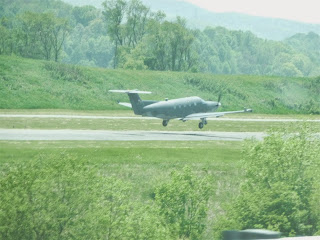 Take off at Mountain Empire Airport 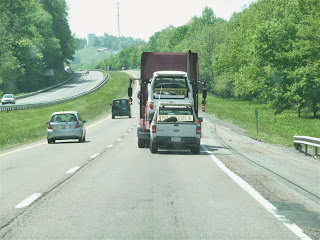 This fellow hauls his own pilot vehicles

Rather than go all the way to the I-26 interchange, the GPS had us get off at Exit 3 in Bristol, Virginia. I decided to see what this would be like. The road took us directly past Bristol Motor Speedway to Johnson City, but there were a lot of traffic lights in Bristol, and every one turned red as we approached. I don't thing we'll go this way again. 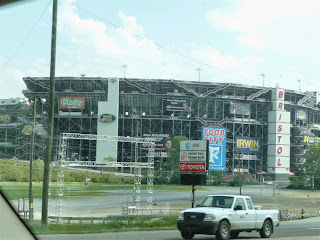 In Johnson City, we caught I-26 east, which actually runs due south in this part of the country. We made another fuel stop at the Shell station in Erwin, Tennessee and then we got more food at the McDonald's next door. We shared the back lot with a Baptist Bible Bus from Kentucky, which explained all the well scrubbed, clean-cut kids and adults in the restaurant. Freedom Riders will recognize this spot as the rendezvous point for last year's President's Ride. 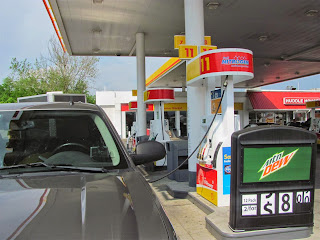 Photo for Diane - she will know why

As we started the climb up the hill to the ridge that separates Tennessee from North Carolina, large black clouds looked ahead. Part way up, the heavy rain hit and lightning flashed around us. Once again, I slowed to 40 MPH and put the four-way flashers on, but was down to second gear due to the grade. It was another good time to not be on a motorcycle. We crossed in North Carolina through Sams Gap with the rain pelting down. 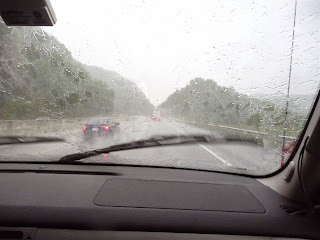 
As we descended the other side of the mountain, the rain ended and all we had left was a fogged up windshield. On the outside. Rush hour traffic was heavy leaving Asheville northbound, but we negotiated I-240 and I-40 West with no difficulty. 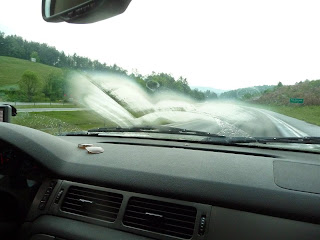 We arrived at A Holiday Motel in Maggie Valley about 6:10 and found Stewey, Lucky Al and Tbone sitting in rocking chairs waiting for us. It was raining lightly so I parked the truck and waited a bit for it to stop. Then I unloaded the bike, parked the trailer and unloaded the truck. We are in a king bed room at the end of the main part of the complex. Rob, who got us checked in, seems like a very nice fellow. 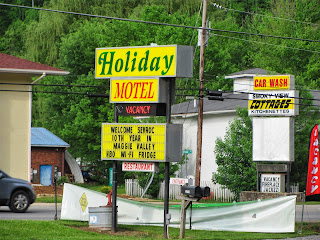 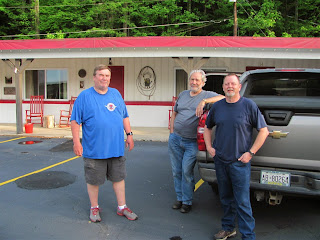 After we were settled, the five of us climbed into the Avi and went up the road to the Cue & Brew (or was that Brew & Cue) BBQ, where we were the only folks in attendance. Al was told about this place by someone at the Shell station. They had a replica still at one end. Because Sandy and I had eaten in Erwin, we shared a Brunswick stew and hushpuppies.  The others had more substantial fare. The server was both pretty and funny, a winning combination. 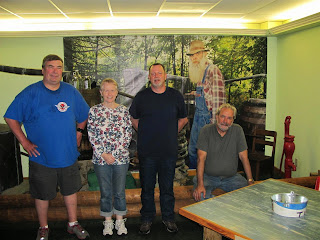 This is moonshiner country 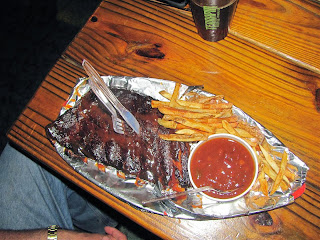 Lucky Al's half rack of ribs 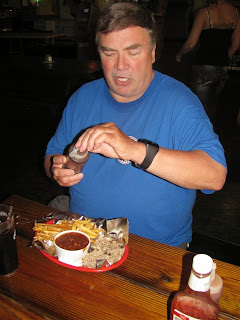 Back at the motel, we saw Borys (from Thunder Bay), along with Fly and Dick the Saddletramp from Iowa. They are regulars at the Boscobel, Wisconsin rally but thought they would expand their horizons.

I borrowed Stewey's smart phone and called TracFone. The nice lady transferred my number to the new phone and activated it, but she could not transfer my minutes because that department closed at 8:00 PM. I'll have to call back after 8:00 AM tomorrow.

They had a fire going outside but it started to rain again, so Sandy and I adjourned to the room where we watched the season finale of Castle and I read a bit before falling asleep. 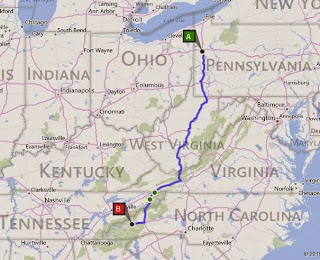