I was up at 6:00 AM this morning to sort out yesterday's blog. It took a couple of hours to get it posted and then I talked to the guys outside for a bit. Stewey loaned me his smart phone again to call TracFone after 8:00 AM. The lady was very nice and got my 700 minutes switched over to the new phone. Then Sandy called her mother to test the international connection. All was good.

About 9:00, we finished the "where are we going to have breakfast" debate and headed down the road to Joey's Pancake House. I had scrambled eggs, a nice piece of country ham (very salty) and a couple of pancakes that were so light it was like eating flavoured air. 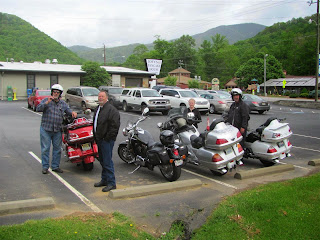 The gang at Joey's Pancake House 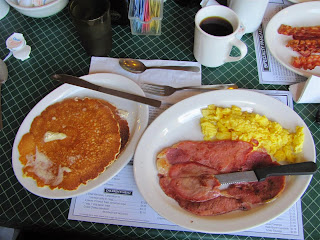 My breakfast at Joey's

Back at the motel, brothers Lonnie and Carl plus Carl's new wife Candy arrived from  central North Carolina. We chewed the fat for a while and then tried to come to a consensus about where we wanted to ride today 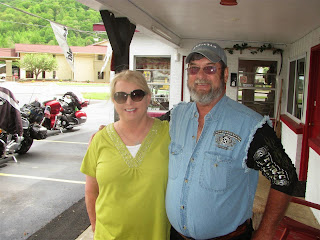 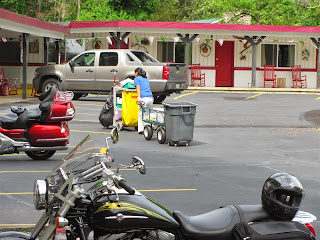 The housekeeper here know how to work hard

The final decision on the day's ride was that I would lead and the rest would follow wherever I went. That put everyone's enjoyment squarely on my shoulders. OK, I was up for it. Sandy and I left the motel around noon with Tbone, Lucky Al and Stewey in tow. Stewey brought up the rear with his GoPro video camera mounted on his Wing to record some of our finer riding moments. More on that later.

Other than a few miles to and from the Freedom Riders meeting last week, this was my first ride since last October. I led the small group west out of Maggie Valley up the grade on US 19 to Soco Gap. We started down the two mile drop, the curving road that wound from the top of the hill (thank you Harry Chapin). No one was ahead of us so we ran a moderate but unrestricted pace through the endless sequence of recommended 30 MPH corners. It felt amazing and I thought the video Stewey was getting would be awesome.

We reached the bottom and rode across Cherokee at the speed limit' continuing out the other side on 19 until we reached Two Rivers Lodge. Blain took a break from his plumbing chores to greet us warmly. We talked for a bit and then Kathy came home from shopping. Blain went and got out Kathy's new toy, a 1948 Mercury convertible with a 454 big block Chev engine, that she inherited from her father. It wasn't exactly a restoration and was known as The Grape Ape because of its Montene purple paint. Adopted son Bill was riding by heading for Maggie, recognized my bike, turned around and came in to join the conversation. Blain and Kathy are the best of folks and we will be staying here for five nights on our upcoming August trip. 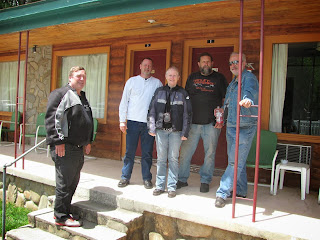 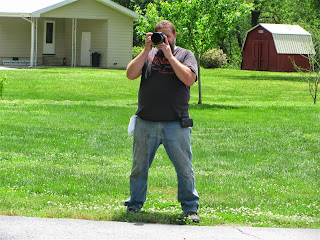 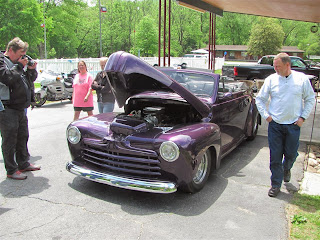 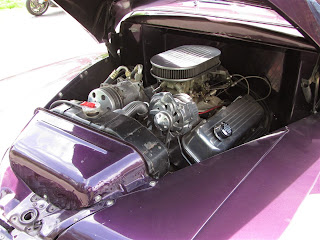 While we were talking, I was formulating a plan. Bill continued on the Maggie Valley while we went the other direction. We switched over to US 74 and followed it into the Nantahala Gorge. The first bit was a bit too slow following a Toyota pickup truck, but then he pulled off and we were free to ride our own pace. Just as we caught up to a slow semi, we arrived at the Visitor Centre/Kayak course and pulled in.

They have quite the kayak course here with a bridge going over top of it. We got some photos although there was only one kayak playing in the river at the time. 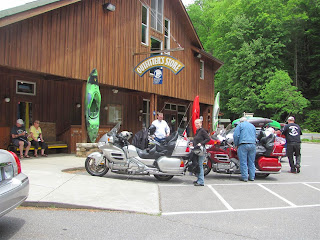 In the Nantahala Gorge 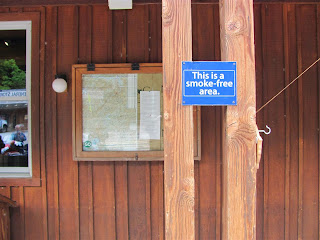 You can't even smoke outdoors here 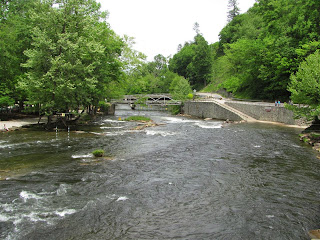 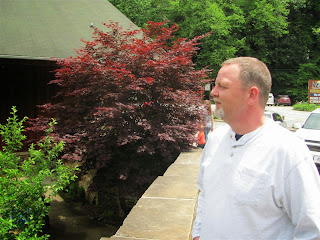 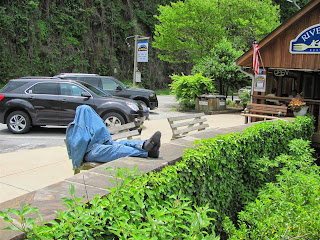 I'm not sure what Lucky Al is doing 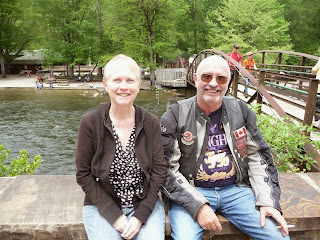 Sandy and I looking happy

We continued on through the Gorge, catching up to a semi that must have been driven by a local. He was making really good time until it came time to climb out of the Gorge. At the top, we turned right and made our way into Robbinsville on US 129.

A left turn at the first light in Robbinsville took us up the hill to Lynn's Place for lunch. Sandy and I had one trip to the salad bar each while the other three had the special of the day, fried bologna sandwiches. Reports were that they were very good. I told our server about my favourite Youtube motorcycle video Ballad of the Gap, in which the restaurant was mentioned a couple of times. She wrote it down. 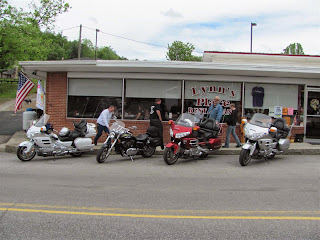 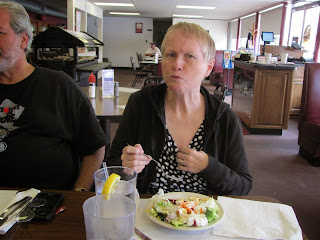 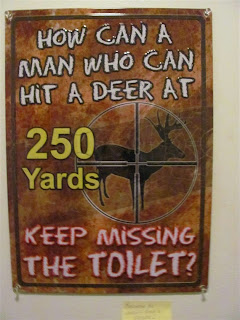 We returned to Maggie Valley via 143, 28, US 74, US 441 to Cherokee and back over Soco Gap on US 19. It was good running except for one American Red Cross minivan that wouldn't give ground in the last passing lane up to Soco.

When we got back to A Holiday Motel just after 4:00 PM, Bob and Linda had arrived from Pennsylvania. Bob was riding his Kaw Voyager while Linda was in their car.  They actually left home before us but had been exploring West Virginia on the way down.

Stewey informed us he had screwed up a setting on the GoPro camera and it was just recording the most recent five minutes. Instead of epic footage of twisty roads, we had five minutes of going through the town of Cherokee. Oh well, win some, lose some.

After another debate about supper, we decided to go to the Sagebrush Steakhouse in Waynesville. Tbone and Stewey jumped into the Avalanche with us, while Lucky Al went with Linda and Bob in their Buick . CC Rider followed on his Nomad. This meant eight of us arrived at the restaurant and they seated us at a table in the enclosed verandah area.

No sooner had we ordered beverages than Lonnie, Carl and Candy showed up. The staff put another table on the end of ours. Soon after, Cheap B, Wanda, Southern Draw, Southern Charm, Flip and Rainman appeared. Another table was added to the other end. The server told us they were short one staff person and it was All You Can Eat Ribs night. Putting two and two together, we should have all had ribs. Instead, the kitchen geared for ribs received seventeen orders of mostly a la carte steaks. It took them some time to shift gears.

The food took a long time to come but my New York strip was OK when I finally got it. OK but not exceptional. The saving grace was that the company was excellent, although Cheap B and Southern Draw together approach some kind of critical mass. There was a lot of laughter. One note. I can understand the delays in the kitchen given the circumstances but there was no excuse for the long hiatus between the end of the meal and the delivery of the bills. That was all on the server. 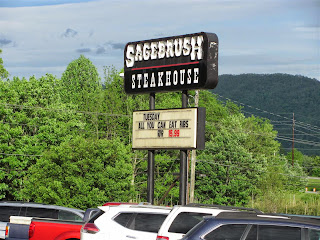 We should have had the ribs 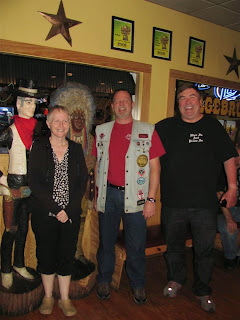 Waiting for the first table 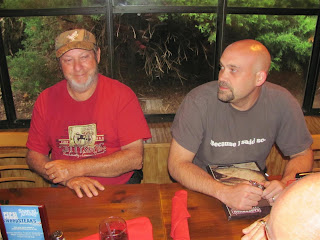 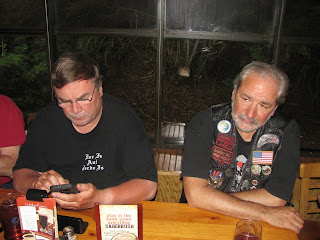 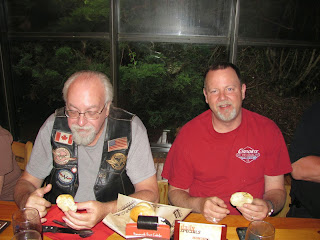 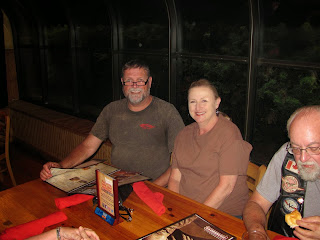 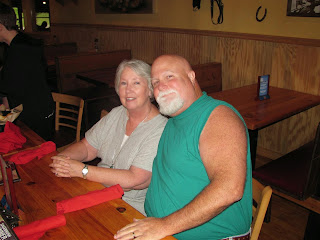 Wanda and Cheap B 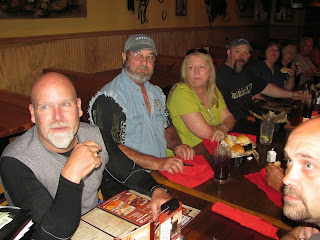 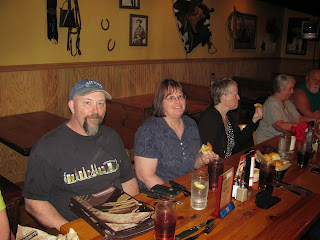 We made it back to the motel after dark and found the rest of the folks hanging out in the parking lot. Wrong Turn and KT had arrived from Indiana in our absence. It was sure good to see them again.

As usual, the conversation ran the gamut of topics. I was telling Fly and Saddletramp about The Ballad of the Gap and so they brought it up on a tablet and we watched it right there. It is even better watching this while in the area. 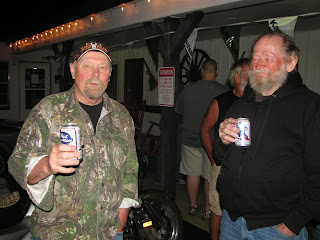 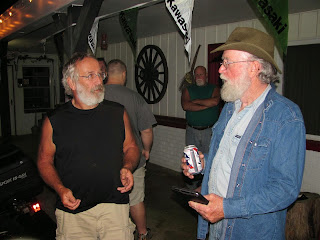 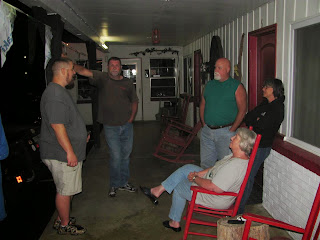 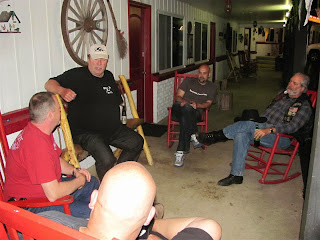 Slowly the crowd dwindled and then someone shut the outside lights off. By 11:30, there were just me, Flip, Tbone and lucky Al still up, so we wished each other a good night and headed off to our various rooms. I watched the news about the Amtrak wreck and then read a bit of Kindle before finally falling asleep.

Skid,
I'm gonna have to start giving you credit for promoting the Ballad of the Gap. I can't tell you what a great feeling it gives to have someone enjoy and share the video so much. Some of the gang are heading down there on Tuesday the 19th. Watch for George on the yellow VFR and Steve on the tractor. I won't make this trip, but I'm hoping to get down in the fall. Looks like a great bunch of folks with you, enjoy your trip!