At 4:45 AM, I woke up and saw Sandy standing there in the dark. I guess we were still functioning on Eastern Time. We had a rendezvous with Waterman planned for 9:30 at a McDonald's in Brush, about two hours away. I said we needed to be rolling at 7:15, but really expected to get away by 7:30.

The blog didn't get finished last night so I went ahead and completed yesterday's entry. Then we packed and loaded the car before walking over to the office/convenience store/gas station for breakfast. There were just two tables, so we got to meet some nice people while we ate. As expected, we were on the road at 7:30.

There were no deer carcasses along the side of I-80 this morning. We saw two in the traveled lanes, though, totally pulverized by the big trucks. Driving past Ogalalla, we swung southwest on I-76 and immediately entered Colorado. The benefits of crop irrigation were evident as watered fields of dark green butted up against desiccated brown desert flora.

Sandy phoned Jan and had a long conversation on the state of things back home. Happy 50th Anniversary, Marie and Ron. After a pit stop at a nice rest area in Sterling, we pulled into the McDonald's in Brush three minutes late and found Waterman (Joel) waiting outside. 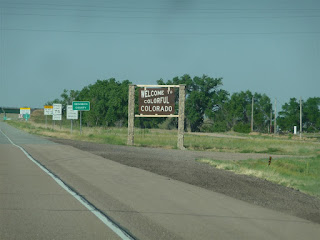 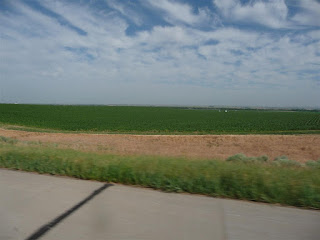 Irrigation vs no irrigation

Joel has been a VROC friend for quite a while. He wasn't going to be able to make it to Taos this week due to work, although he was considering trying to slide down on Friday night. It was good seeing him again as we caught up on many things.

We decided not to fuel until Limon Colorado, where Gas Buddy said prices were $2.19 compared to $2.39 here in Brush. Joel gave us the shortcut to Colorado 71 South, and then led us there after I stopped just out of the lot to set the GPS. Joel, I thought Limon had been saved as a favourite but I had to find it all over again hence the hesitation. The GPS led me through the short cut without prompting. 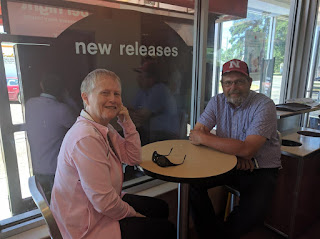 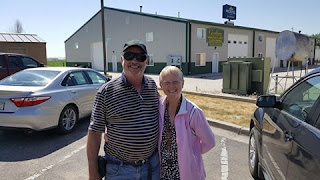 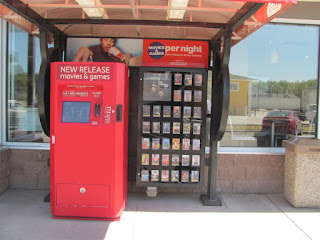 No Internet streaming in the boondocks?

Colorado 71 is a two lane road running due south from Brush. In the 60+ miles to Limon, there is one stop sign at a crossroads called Last Chance. We weren't sure what it's a last chance for, since the stop sign was about all that was there. The terrain was much like western Nebraska, lightly rolling hills and not much evidence of water.

South of Last Chance was an absolutely huge wind farm, evidence of Colorado's plan to generate 30% of their electricity from renewable sources by 2020. We also saw signs saying "No Snow Plowing 7 PM to 5 AM". I looked this up and found it was a budget measure on roads having less than 1,000 vehicles per day. Not many vehicles were seen on Co 71 today. 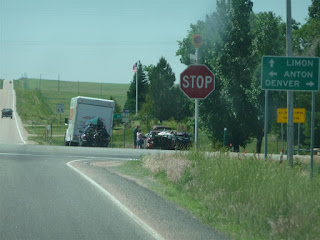 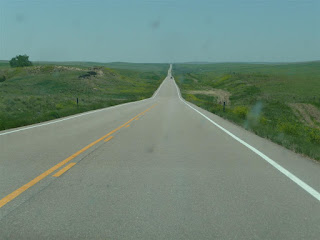 Colorado 71 - A runner up in the Loneliest Highway category 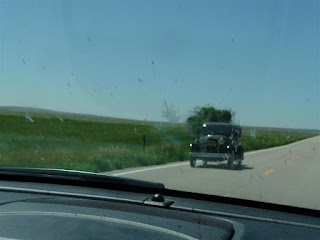 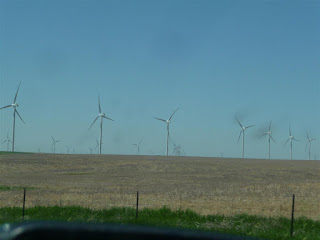 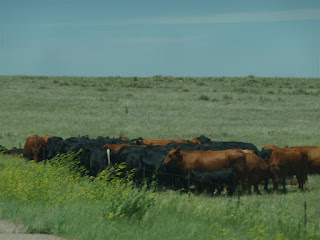 The no ethanol gas didn't seem to make much of a difference. Maybe it really had ethanol or perhaps this newer engine handles ethanol better. Regardless, I will save the money with the Equinox in the future. We fueled and bought snacks at a busy Travel Centre of America on I-70 in Limon and then headed west on US 24 towards Colorado Springs.

Although the land was still quite flat, we eventually could just make out the faint image of Pike's Peak on the horizon. Zebulon Pike had two peaks named for him. He also had a Canadian connection, because he died leading the assault on Fort York (Toronto) in the war of 1812 when the defenders detonated the powder magazine as they were being overrun.

Sandy had trouble getting photos of the mountain while we were traveling. Trees and utility poles kept jumping into her frame:-)) 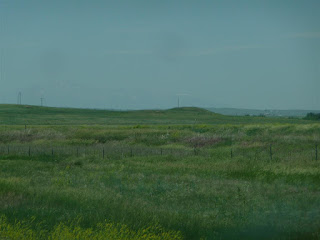 A faint outline on the horizon of Pike's Peak 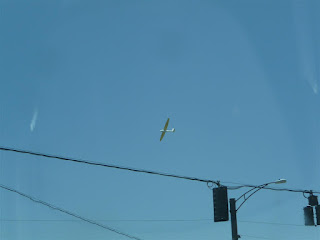 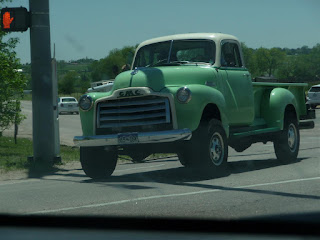 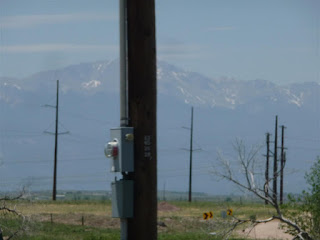 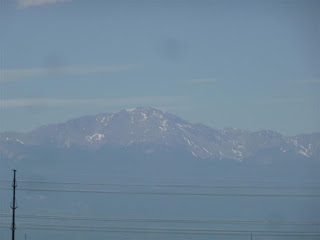 The GPS directed us into town and then had us get on I-25 South for what was supposed to be 6/10ths of a mile. Due to huge construction, it was more like 100 feet and I missed the exit trying to dodge a truck/U-Haul combination that pulled into our lane. We flipped back and then followed directions to the Front Range BBQ in Old Colorado City where we were going to meet Joe aka Heavy Hand, another VROC friend.

I first met Joe at V2K, the first world wide VROC gathering in 2000 in Durango, Colorado. He had ridden in from Texas and had a dead bird stuck in the front of his Nomad. I still refer to him as "Birdkiller" from time to time. We haven't crossed paths in years and Joe can't get away to run down to Taos either, so it was good to have some time to catch up.

Joe had never been to Front Range but heard it had good reviews. After waiting a while for a table, Sandy enjoyed a pulled pork sandwich while I had a brisket sandwich and bacon/potato salad. Joe had a sampler plate with all the meats, which he proclaimed to be good. 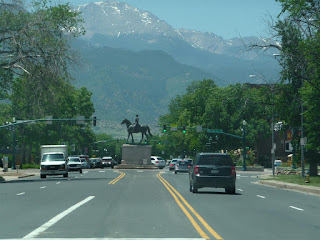 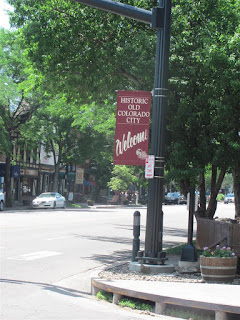 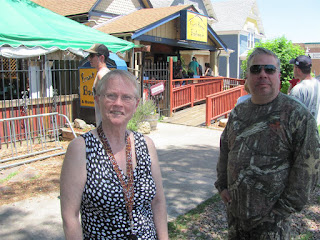 Sandy and Joe aka Heavy Hand 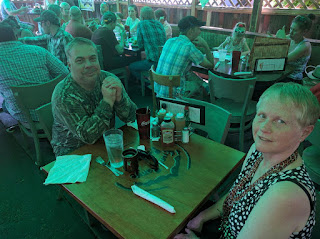 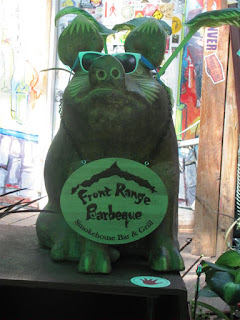 Back in the car, I realized I had committed a mortal sin.  Never leave the GPS in the hot sun. I couldn't even touch it because it was so hot and it acted a bit strange until it cooled down a bit. Luckily, it survived and I promised myself I would be more careful in the future.

I had booked a room at a Microtel in Pueblo, about a half hour south on I-25. The temperature hit 104 as we were motoring down the highway. The Microtel shares a lot with a Hampton and I got the wrong door the first time around. Our room, when we finally found it, was a single queen (my error in booking) in a small room that made me think of Lost In Translation. Still, it was new and well appointed. 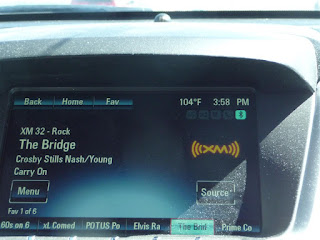 We didn't need supper after the late lunch and just had a few snacks. I caught up on the day's posts and news and then I read in air conditioned comfort while Sandy watched TV until bed time. 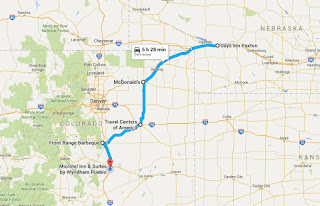 No plowing might be a budget factor but it is a pain in the rear.