Today we set out for the Vulcan Riders and Owners Club's Wolfman's Wandering Rally X in Taos, New Mexico. We will be traveling 1,850 miles, spending four and a half days visiting with our VROC family and then driving the same distance back home. This might seem to some like a large effort with a minimal payback, but if you understood what the people of VROC mean to some of us, it would become clear.

I was close to being all ready to go yesterday, so I stopped what I was doing. This allowed me to scramble this morning with last minute packing. After all the trouble we had last trip with the Tracfone SIM in my NEXUS phone, I decided to try a new US package that my Canadian provider just started to offer. As a result, we will retain our regular cell number while on the road in the USofA.

We left the driveway at 8:15 and drove to McDonald's to get breakfast to go. When I shut the car off, the GPS did not ask about shutting down. This meant it was running on internal battery power. I checked the connections on the power cord while Sandy suggested a blown fuse. There is a 3A glass fuse in the plug and yes, it was blown. We made a trip back to Crappy Tire, got a package of fuses and got the GPS working in short order. Then it was back to Mickey D's to grab some grub and we were finally rolling by 9:00 under sunny skies.

We stopped at Tim's in Espanola, a picnic area along the Mississagi River and McD's in the Soo. The first two stops were to use facilities and the last was to get me another coffee and Sandy a blueberry pomegranate smoothie. She may be addicted to these...... 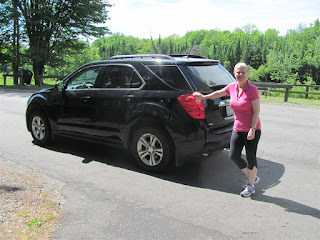 A great day to be traveling

The International Bridge Plaza on the Canadian side was undergoing some hefty construction. There was only one lane usable getting onto the bridge. I had considered coming home via Sarnia, and this was one more incentive to do that. The good news was that there was no appreciable US bound traffic today. The border agent threw me a bit with his greeting of "How's it going?". He asked where we were going (Taos), why (to see some friends) and whether we were bringing in anything other than luggage. Then he wished us a safe journey. Total time from the time we got on the bridge until we cleared customs was ten minutes. 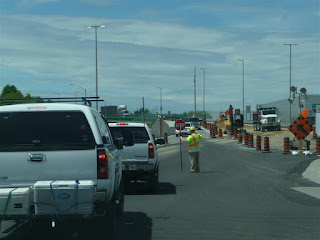 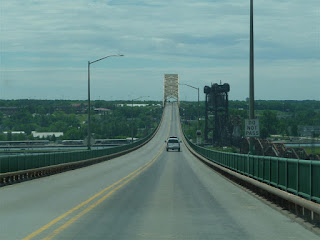 I wish it was this empty all the time 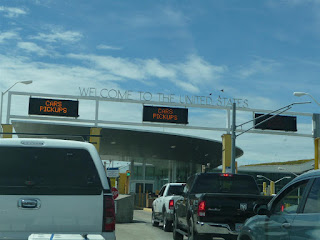 This was the total line

As we drove west on Michigan 28, I reflected on how nice it was to be driving along in the car with no trailer. In the past, traveling without the bike would have really bothered me. Priorities change, I guess.We stopped in Newberry to get some more food and I tried out my phone. Of course it didn't work. I restarted it and found I had to let it search for a network. Then it kicked in.

We drove south on M-117 through Engadine (five of us got speeding tickets there in 1988) and turned west again on Michigan 2 towards Escanaba. There was a close call with a deer along this stretch, but it was a clean miss.

As we approached Menominee and the Wisconsin border, I broke my cell phone case. We stopped in Menominee at a McD's to borrow some WiFi. I used the Wyndham app to reserve a room at the Airport Super 8 in Oshkosh. They wanted $100 but I got that down to $45 and 3,000 Wyndham points. I could have got it free for 15,000 points but seemed like the best value was the reduced rate.

Then we crossed into Wisconsin. We had already entered the Central Time Zone a few miles back. 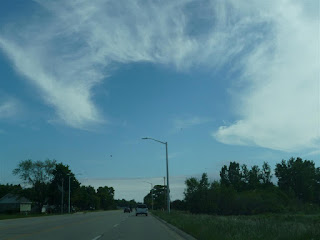 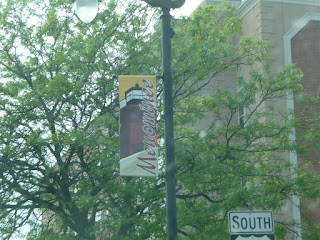 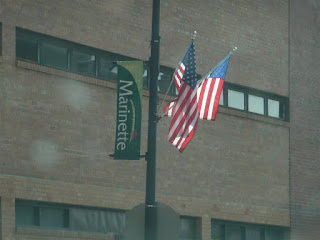 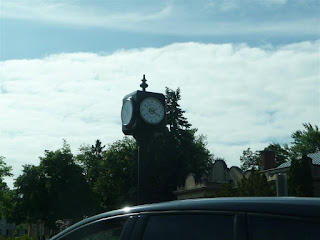 They even have clocks 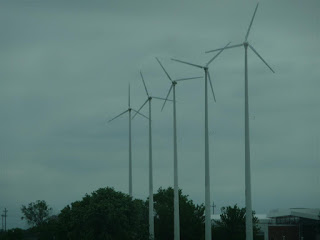 And some tiny wind turbines

The gas price  dropped from $2.57 in Michigan to $2.49 in the Badger State. My low fuel alarm went off in Peshtigo so we stopped and filled up. Almost 450 miles and average consumption of 26 miles per US gallon was pleasant.

There appears to be a new Interstate starting in Green Bay. US 41 is now I-41 although there is still a lot of construction through Appleton and on to Oshkosh. 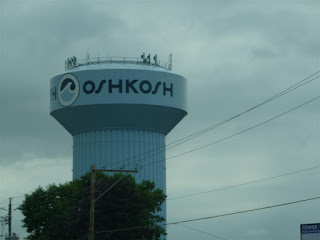 Sandy picked an Olive Garden for supper. We split an order of chicken and shrimp carbonara, brought to us by a very attractive and competent server named Sam. It was good but we didn't have enough appetite to finish our respective halves. 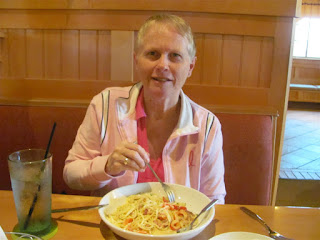 It was only a mile or so to our motel. We got checked in and I spent the rest of the evening posting bills and doing this blog entry. I also ordered a new cell phone case to be delivered to Kachina Lodge in Taos (attention Sherm). Tomorrow, we will continue west. 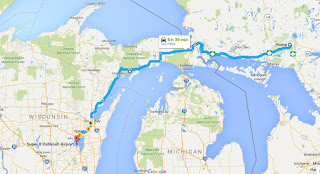