If all went as planned, this would be our last day on the road for this trip. We were down for the hotel breakfast when it opened at 6:00 AM. This time, they had little omelets and hash browns in addition to the usual fare.

We set out at 6:30 amid heavy Monday morning rush hour traffic. The GPS started giving me some strange directions, so I zoomed out and saw that it was routing me home via Thunder Bay and the north shore of Lake Superior. Once I turned off the avoidance for toll roads, things started looking more normal and we navigated the combination of highways around Madison towards Oshkosh. 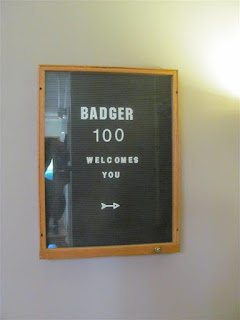 Our rally organizer was still in our minds 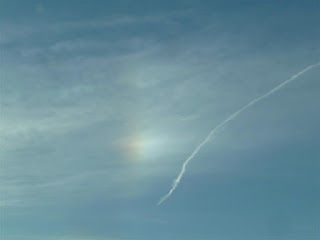 US 151 took us northeast past Beaver Dam, where we saw another Culver's "Thank You, Farmers" barn. Then we took Wisconsin 26 as a shortcut to US 41. On the way, we stopped in Rosendale for fuel. You know you are in farm country when they have separate pumps for On-Road and Off-Road diesel fuel. The difference is in the taxes. 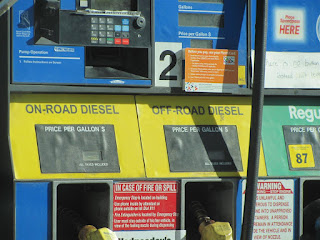 US 41 was under heavy construction through Oshkosh and Green Bay. Then things got better as we moved further north. 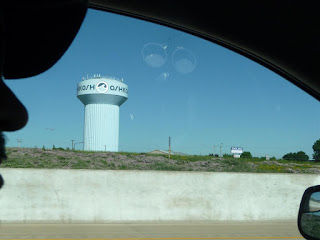 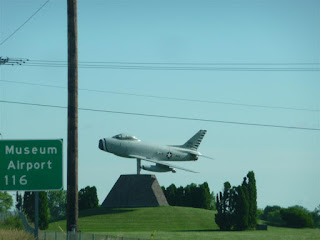 Oshkosh is all about airplanes 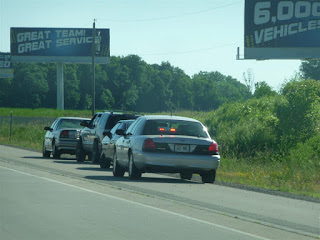 Someone wasn't having a good morning 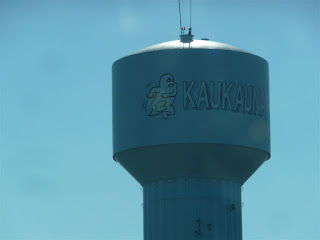 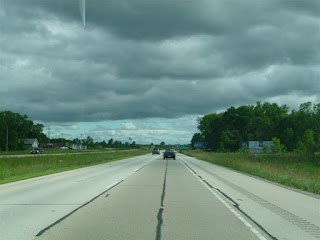 Finally clear of the morning traffic 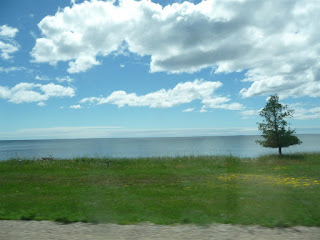 Green Bay (the bay, not the city)

We made a stop at a McDonald's in Marinette before crossing the Michigan border. I commented to the staff that they need a sign indicating that their thoughtful pull-through parking spaces were for oversize vehicles. When we arrived, every one was occupied by car drivers who had no appreciation of the challenges facing those in RV's or those towing trailers. 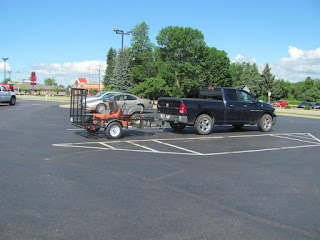 Cars were using all these spaces when we arrived

Crossing into Michigan, we took M-35 along the shore line to Escanaba. returning to our own Eastern Time Zone. The temperature was down to 69F. If you are reading this, Sherm, this is the temperature that human beings are supposed to live in:-)) 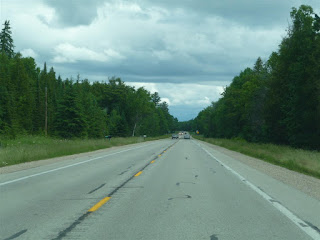 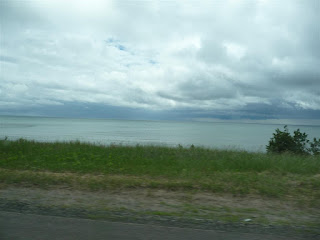 On US 2, we encountered a few drops of rain. This was the first precipitation we had seen since we left Taos. Another deer wandered out in front of us, but was far enough ahead that we got slowed down with plenty of room to spare. After driving north on M-117 through Engadine, we stopped for another bite and smoothie at the McDonald's in Newberry. One hour remaining to the border.

I needed to stop at WalMart in Soo Michigan for some pens. I have a preference for Zebra G-301 gel pens but, although Staples in Ontario carries the refills, they don't have the pens. Neither does anyone else in Canada that I can find. The WalMart in Taos was out of them but I found three pairs here.

There were no cars lined up to get into the USA as we left. There were very few waiting on the Canadian side, either. The young CBSA hotshot asked how long we had been away so I told him twelve days. He asked if we had been in the USA the whole time and I said yes. He asked the farthest point of our travels and I told him Taos, New Mexico. He asked if we had flown from the US side and I said no. He looked at us funny. Then he asked if I had receipts to prove where we had been and I said yes. (He obviously didn't know who he was dealing with.) He asked to see them and I said I would have to get them out of my computer bag in the back seat. He replied never mind and then chastised me for not having them immediately available (this was the first time I had ever encountered this request), before sending us on our way. I stifled my first response, said thank you and rolled out onto Canadian soil. 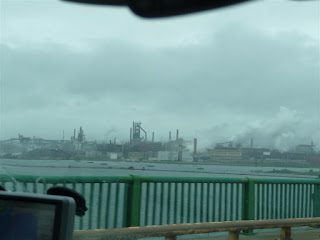 Want to buy a steel mill? 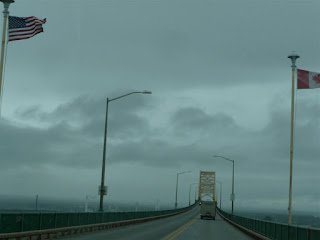 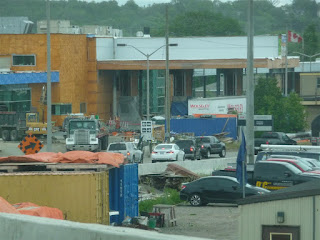 Lots of construction going on 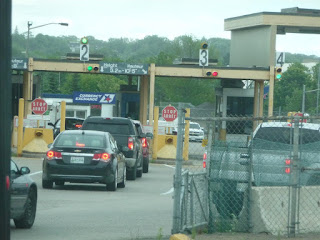 The trip east on Highway 17 was uneventful until we caught a line painting crew east of Bruce Mines. In addition to the warning vehicle a mile back, they had two trucks in the painting caravan. The first was painting the lines and the second just seemed to follow to increase the costs to the taxpayer. 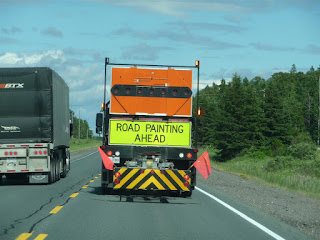 Just after we went through Blind River (Long May You Run), the panel gonged and I looked down to see the fuel warning light on. My usual last stop before crossing the border is to top off with relatively cheaper US gas. Somehow, with the stop at Wally World, I forgot. I did some fast calculating and figured we could make it to the station in Massey with what we had on board.

I hadn't thought of the First Nations station in Cutler, but stopped there instead once I saw it. The price was competitive so I topped up. A westbound motorcyclist told me he had been stuck in a construction zone the other side of Massey for an hour. We came this way less than two weeks ago and I didn't remember any work of that magnitude.

Sure enough, the Spanish River Bridge was down to one lane. The signal lights were shut off and a flag person was controlling the traffic flow. We got there at the end of a group and made it across without stopping. On the other side, the traffic was lined up to Old Nairn Road, a distance of probably seven miles. The MTO said the bridge would be down until fall. To add insult to injury, the bridge on Highway 6 into Espanola was also down to one lane, causing a double whammy for any folks from there or Manitoulin Island going to Sudbury. 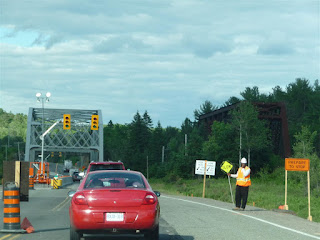 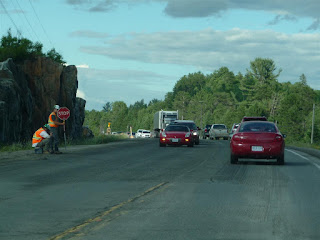 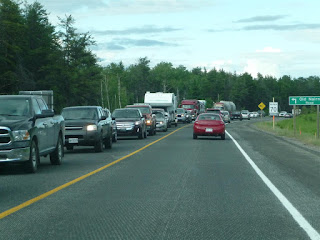 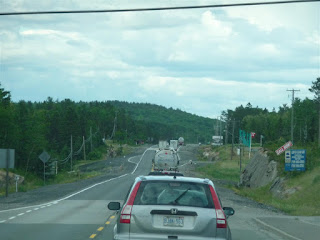 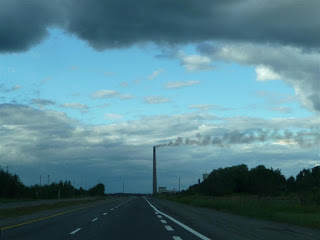 Wind is out of the north

We got caught in slow traffic until the four-lane. There was a long stretch of the four-lane with orange barrels ready to be moved out to block a lane. This section needs some real work, but I think I won't go west this summer unless I really have to. Finally, the ramp from Municipal Road 55 eastbound to Highway 17 appeared to have been dug up by no less than three excavators.

The best way through town would have been on Lorne Street, but I am sorry to say that this major artery was just too rough to be considered. I don't know how anyone on council could be proud of the their city, given the state of many of their major roads. Instead,we took the Big Nickel Road and Lasalle Boulevard. It was interesting to see that Vale, who managed to cap the old slag dump and get grass and trees to grow on it, had planted some new trees along the sky line. 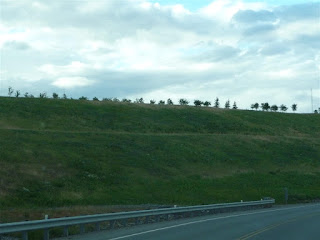 We pulled into the driveway just after 8:00 PM and were unloaded and unpacked by 8:30.

Over 4,000 miles round trip to spend four days with friends. Quite the effort. Was it worth it? You bet it was. A few more weeks and we'll be off to see more friends for a few days in Kentucky. 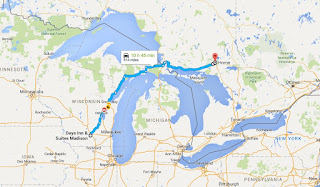