The 16th Annual Freedom Rally is history. It was a great weekend.
We started on Thursday, the day before the official rally start. As Treasurer, I got the cash sorted out and then we took the trailer down to the rally site at the Mine/Mill Campground on Richard Lake, just south of town. There weren't a lot of people there when we went out for supper but a lot had showed up by the time we came back at 7:30. The skies darkened and we did get some evening rain. 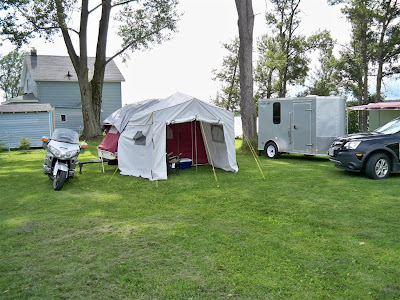 Our campsite beside Biker's trailer 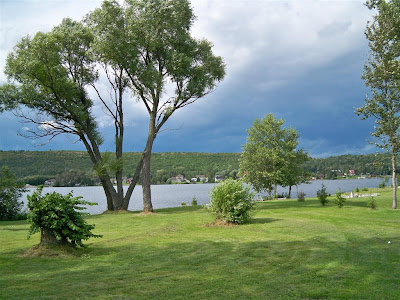 Rain clouds over Richard Lake
Friday morning started slow. I set up the cashes for registration, the concession and merchandise sales. People started to roll in after lunch. We had committed to 150 meals and only had 56 paid pre-registrations so I was happy to see people arriving. Spyder's Web arrived from the Soo and set up their equipment. Shirley and Mark play every year gratis, which is very much appreciated by the club.
The concession was serving sausage, hamburger and chili meals and, as the day wore on, a silent auction was set up. I bid several times on some wireless headphones but Dan beat me to them at the end. Later on, the band played, people danced and free hot dogs were dished out. Others gathered at the bonfire for a while. Overnight, it rained again.
Saturday, we awoke to a blown water line which took both the showers and the kitchen out of action. It seems some bozo in what looked like a pickup truck drove over the water hose, breaking a connection. Both Gary's tried to fix it but it took Gord and a torch to seal the deal. Because the pump ran all night, it appeared that the water pickup in the lake was compromised and was sucking dirt. This caused ongoing problems all weekend with the toilets, a situation Gord wasn't thrilled with.
Rides left at 10:00 for Manitoulin and a local camp. With most gone, it was a quiet time. Tom and Heather arrived after lunch, having left Waterloo last night and camped in Orillia overnight. I'll put the links to Tom's blog entries at the end of this post.
When the runs came back, I took care of dealing the cards for the poker run. I made a mistake in how I set things up, and the revenue suffered as a result. We'll do better next year. The evening continued with more music, dancing and hot dogs. We also had a downpour but, as usual, it was at a convenient time. The bonfire, with pallets, was awesome.
Sunday we had more breakfast stuff laid out (did I mention the breakfasts) and the Christian Motorcycle Association held a service under the Metis tent. The high point of the day was the motorcycle field event but I missed most of it looking after money and other details. 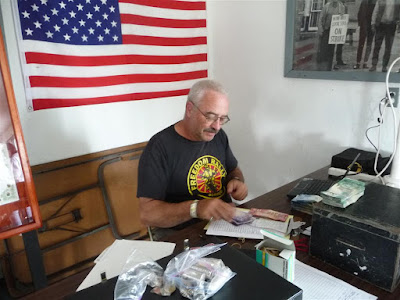 The Treasurer in his "office"
The caterer arrived and was set up to serve us under the big tent by 6:00. After all my worry, we served 150 right on the nose. The meal was great with chicken, beef, perogies, veggies, potatoes, salads and desserts. Afterwards, a strange lady named Dorothy hosted the awards section of the evening. One interesting pair of awards went to the youngest rider (daughter Heather) and the oldest (Fred, who helped her pass her test). Tom won the lowest poker hand.
The band didn't play the last night, but there was a large gathering at the fire and Shirley, Mark, Spyder and some others played guitars. The last night is always a little sad but this provided us with time to reflect on why we do this. We will be making a donation as well to the Pediatric Burn-Scar Garment Fund at the Sudbury Regional Hospital.
On Monday, everyone broke camp, had coffee and breakfast and stated to leave. We cleaned up quickly and were home early. I had every intention of finishing the books but I just flaked out for the rest of the day. Chores could come later.
Freedom Rally Photos
Tom's Blog Day 1
Tom's Blog Day 2
Tom's Blog Day 3
Tom's Blog Day 4
Posted by Jim "Skid" Robinson on 8/03/2009