Interlochen Michigan to St. Ignace Michigan and Back

I slept in a little this morning, not getting up until 7:30. I found when I stick my head out that Sandy had given my morning coffee to KT. This actually worked to my advantage because Stewey offered me a cup of the Kona coffee he had picked up on his recent trip to Hawaii. That was some good coffee, worth every bit of the $28 per pound. Thanks, Dave. 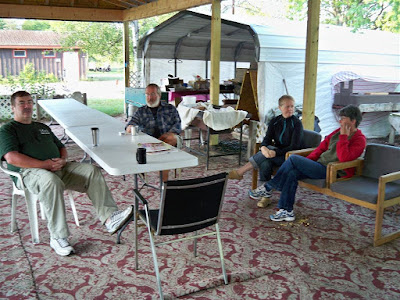 Morning Coffee Drinkers At The Pavilion
We headed over to Dilbert's Cafe, right next door, for breakfast. I had the special, Southern stuffed hashbrowns. It was an excellent medlley of breakfast items mixed together annd covered with sausage gravy. The only downside was that there was so much that I couldn't finish it all. After, we stopped at the Cycle-Moore office to pay and checked out the finger-eating parrot they have there. 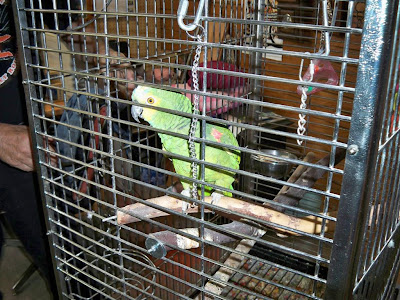 He's Not Really Dangerous
Cheap B and KT had never been over the Mackinac Bridge so we decided to make the run today before the weekend traffic got nuts. Rainman led the group with Zever, Wrong Turn, Cheap B, Paul, Fireball Lisa and KT on the back of Chunk's 800. Stewey tagged along up US 31 to Petoskey where he broke off to go and visit a friend.
In Charlevoix, the traffic was backed up from the bridge. Our right lane merged and the traffic was bumper to bumper. I was near the front and, wanting us to remain together, I squeezed into the left lane and then stopped while our whole group moved in ahead of me. 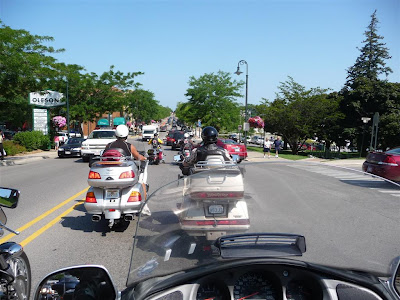 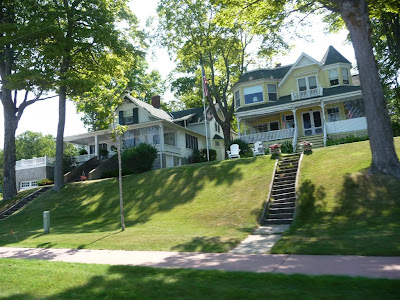 Bay View Homes in Petoskey
North of Petoskey, we turned on M 119 and took the scenic ride following the Lake Michigan shoreline. After a while, the road narrowed, the cntre line disappeared and we entered the Tunnel of Trees. Traffic was light and two cars we came up on pulled over and let us by. 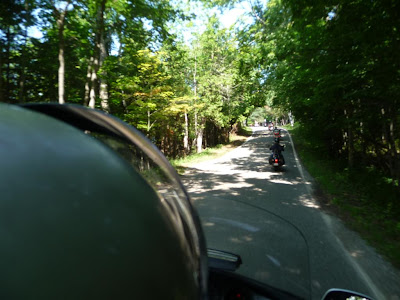 The Tunnel of Trees
We stopped at Cross Village but didn't go into Legs, the famous Polish Restaurant. Scotty, Marlene and Butch were coming out and he pointed out that, once again, the 'slow' riders had gotten here first. Running joke based on an episode years ago at this rally.
We continued up the scenic route to Mackinaw City but I (based on a faulty GPS reading) gave the leader a bad direction at a T-intersection resulting in us taking a less scenic shortcut. There were no signs out here and I eventually had to take the lead to navigate us back to US 31, north and over the bridge. As with yesterday, we were on the steel grating once again. Paul and Zever broke off before we crossed over. 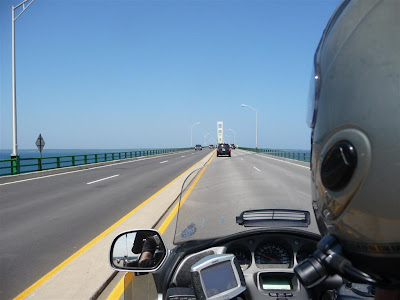 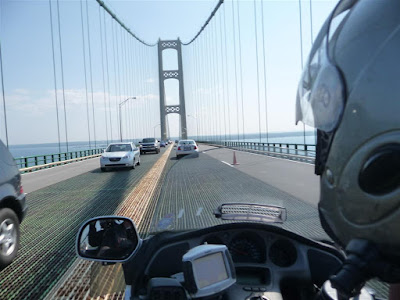 On The Steel Grating 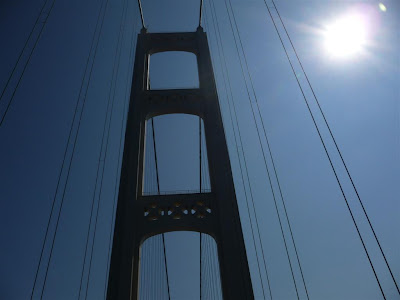 One Of The Towers 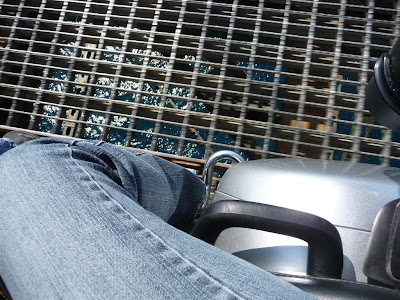 The Straits of Mackinac Way Below Us
Across the bridge, we stopped for a moment to regroup and then Wrong Turn led us to a souvenir shop where Cheap B bought gifts for his grandkids and a few others got some UP (Upper Peninsula, home of the Yoopers) mementoes. The roof of the shop had a viewing platform where we could look at the bridge. Then we went down the road for some pasties, a local treat imported by miners from Cornwall. Sandy and I split one filled with turkey, potato and vegetables. One half was plenty to fill me up. 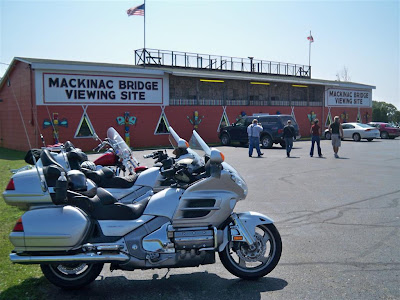 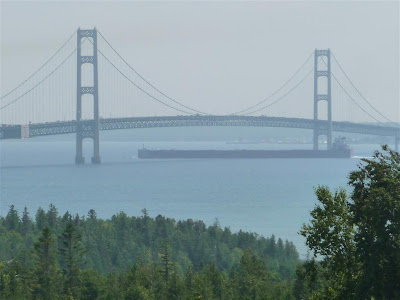 A Lake Boat Passes Under The Big Mac 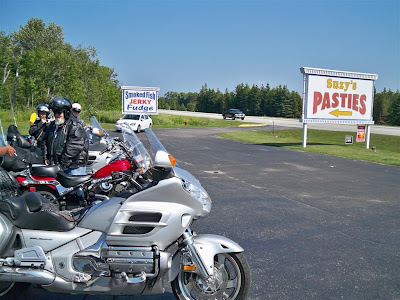 Suzy's Pasties on US 2 - St. Ignace
With time passing, we fueled and headed back the fast way, down I-75 to Gaylord. It was 30 C, a real summer day. After a break in Gaylord, we cut across to US 131 and, other than a big one-lane construction scene, rode down 131 without incident to a rest area near Fife Lake. We went this far south to completely bypass Traverse City.
At the rest area, a Harley pulled in with a pet carrier strapped to the top of the rear trunk. In the carrier was Odie, an old dachshund who loves to travel by bike. When it was time to go, Lisa's Nomad refused to start, exhibiting an intermittent wiring problem they haven't been able to diagnose yet. Eventually, after fiddling with the harnesses, it roared back to like. The HD guy seemed amused by the work on the Vulcan but was too polite to say anything. 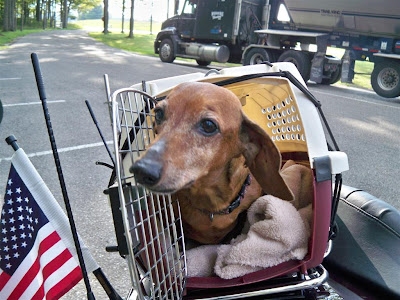 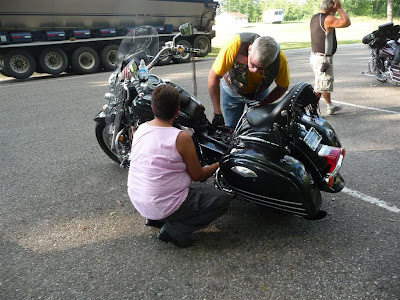 Obstinate Nomad
Coming into Interlochen through the village from the south, we discovered it must be family day at the Center for the Arts. The lots were full and people were directing traffic. I couldn't help but laugh as, in one field adjacent to the road, there was a marching band in casual clothes practicing. What caught my eye was a tall, pretty redheaded girl with a flute. "One time, at band camp...."
We were back at camp by 7:00. Slammer and the CRV had arrived from North Carolina in our absence. We adjourned to Giovanni's again for supper and then went back to the campground for a bonfire with some wood Evan rustled up. I remembered at bed time why it wasn't a good idea to be too near the fire as a stereo played nearby into the wee hours.
People On The Ride 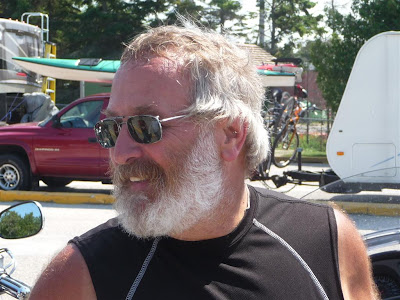 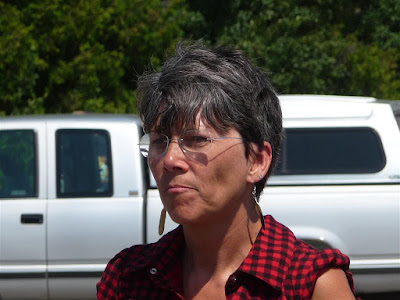 KT
People Around The Fire 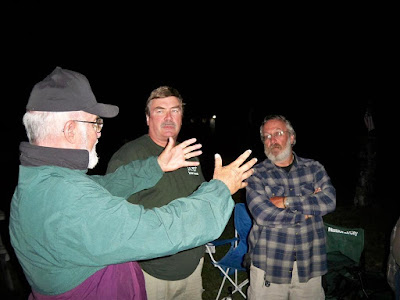 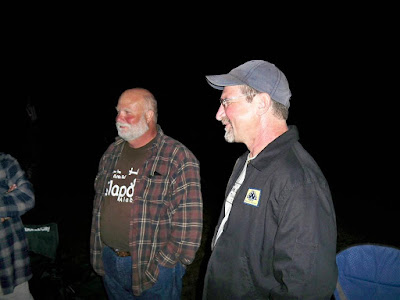 Cheap B and Skyking 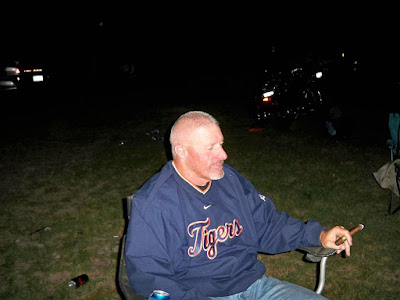 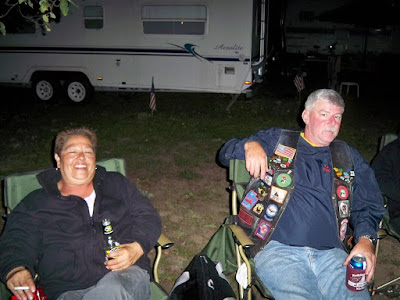 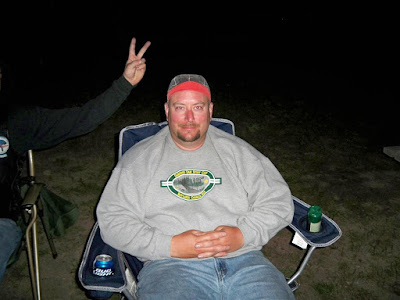