We started the day as usual with breakfast at Dilbert's. After that, groups went several different directions. One set out for Old Mission Peninsula and another lighthouse, but we discovered Pierce Stocking Scenic Drive was free today and a few of us decided to head that way. Our group consisted of us, Scotty, Marlene, Zever, Tvlle and Dan & Ann from Ann Arbor.
On the way up, we stopped in Honor to check out the scenic overlook of Lake Michigan that we failed to find last year. Scotty had scouted the correct site and led us there. Amazingly, we found it on Scenic Drive. 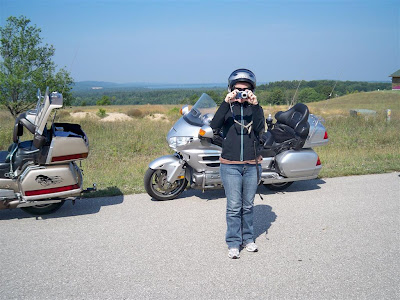 The view from Scenic Drive in Honor, Michigan
I led the way up Deadstream Road (no cop today) and then north on M-22 through Empire and M-119 to the entrance to Pierce Stocking. It was, as advertised, free today. The only negative at the gate was the driver of the car ahead of us, who seemed to be telling her life story to the ranger complete with great hand gestures. After five minutes, she finally either ran out of things to say or got cramps in her arms and moved on. We took our information brochures and commenced scenic driving.
I led to the first pull-out which looked out over Glen Lake. We could see why M-22 was closed south of Glen Arbor which forced our detour on 119 yesterday. There were cranes and equipment and the causeway had been completely excavated. 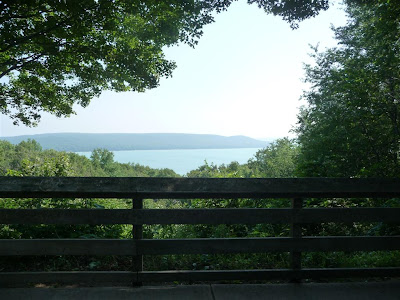 Glen Lake seen from Pierce Stocking Scenic Drive
At the second lot, most of the group wandered over the hill to look at the dunes while a few of us, veterans of the dunes, watched people come and go at the picnic area. The third stop, the big one, was packed and we had to park by the roadside near the exit. I stayed to watch the bikes while the rest went to look at the major dunescape. I talked to a few other people and discovered an extensive plantation of poison ivy right beside the road. Anyone stepping out of the curb side of a parked car would be at risk, it was that close. 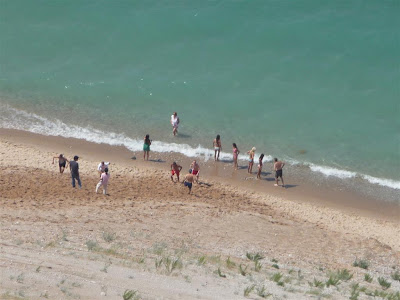 Lake Michigan shore zooming 450 feet down from the top of the dune
While I was waiting for everybody, I chased down a plastic-on-plastic rattle I had heard in the campground. It seems that a press-fit rubber collar around the fuel filler neck that is supposed to keep the overflow tray secure hadn't been pressed, allowing the tray to rattle. This would have happened when they moved the tank to get at the thermostat. Easy fix but it should have been done at the shop. I imagine they don't pull many fuel tanks.
From the lookout, we rode down to the gate with almost no traffic ahead of us. One car actually pulled over and let us by. The tight narrow one-lane road is fun when you can actually speed up a bit. We left the Drive and headed back south to Empire where we stopped at an ice cream shop. While we were enjoying our treats, someone said a car had hit one of our bikes. Turns out a rental car with a Japanese driver who claimed not to know much English backed into Dan's tire. No visible damage, but I was annoyed by the way the driver tried to avoid us.
Dan and Ann left us in Empire, heading north in search of the Maritime Museum. After one wrong turn, I found Platte Road which took us to US 31 and back to Cycle-Moore. It was 29C when we rolled back into camp.
For the rest of theafternoon, I worked on blog notes. Chunk was working with KT, critiquing her photos and offering suggestions and encouragement. Chunks depth and breadth of knowledge on a wide variety of subjects never ceases to amaze me. 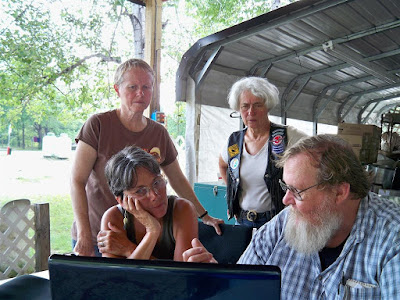 Chunk coaching KT while Sandy and Marlene look on
Here are a few other scenes from around the campground during the afternoon. 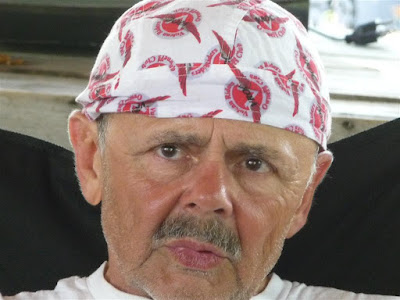 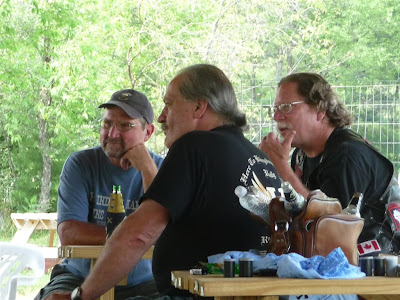 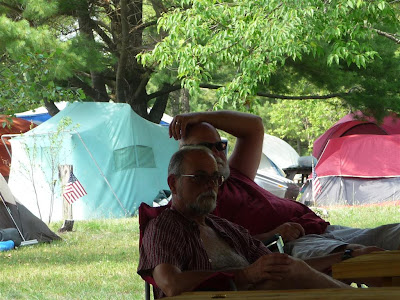 Don and Cheap B 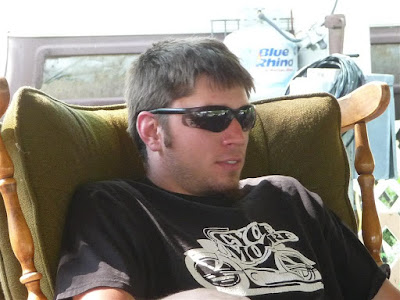 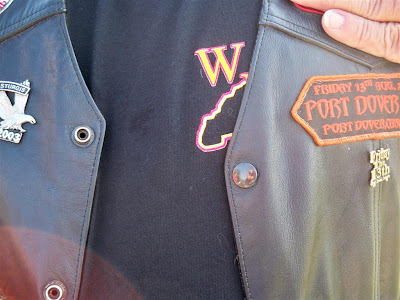 Western Kentucky got a few comments
Near the end of the afternoon, we took down the awning and stowed it so it would be dry. Then Tomcat led a large group of us into Traverse City to the Outback Steakhouse for supper. It took the restaurant a while to accomodate our group but the manager and staff made sure we were comfortable on the porch. 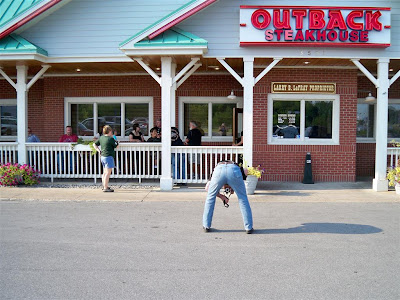 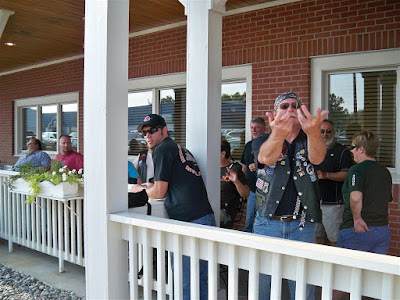 Patiently waiting for a table (except TC)
Supper was excellent and the company was, as usual, beyond compare. After supper, we rode back to the campground and Flattop and BJ started dueling bonfires. Wrong Turn got me to show him a few of my Zumo navigation techniques and the old-time brigade under the pavillion talked GPS's, speeding tickets, rallies and our plans for next season. We were in bed by 11:00 but the music played on, reminding me why we normally don't camp too close to the fire.
Today's Route