The teardown went quickly this morning because the awning and poles were stored last night. One of the last things I did was to check the tire pressures. The front needed a couple of pounds so I dug out the trusty compressor and plugged it into my 12V outlet. No go. The pump was dead. Was it a fuse or something worse? (I found out at home that the mechanic forgot to plug the connector in and that removing the panel to fix it was easier than I thought). Zever loaned me a plug-in and I got the tire right up to where it belonged.
Kudzu left before we even got up and Stewey pulled out just before we did. Zever, on a quest to circumnavigate Lake Huron, rode with us as we headed up US 31 to Charlevoix. After the traditional Mickey D's breakfast, we continued on to the Soo. Pellston, ice box of the nation? OK, it got cold there once. And the Big Mac had most of both lanes open for a change. 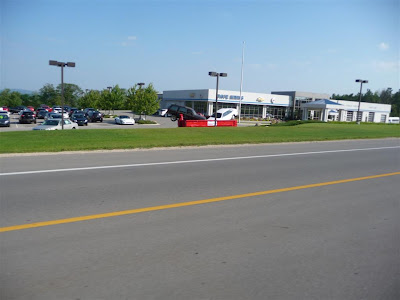 Cash For Clunkers in Petoskey
After topping up fuel in Soo Michigan, we started across the International Bridge. As usual, US bound traffic was backed way up while we drove right into an almost empty customs plaza and were welcomed home with no problem after declaring one bottle of cherry wine. Thanks, KT. 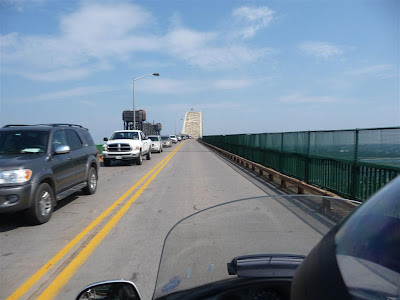 US Bound Traffic on the International Bridge
From the bridge, Zever continued east on Highway 17 while we headed north to see Mom and Rabbi for a bit. We had a nice visit before getting back on the road about 1:45.
I see the new four lane Highway 17 by-passing Echo Bay has started to develop truck ruts in the right lane. This is less than two years old and it disappoints me that it would start to deteriorate so fast. They will blame it on the weather but I am sure that the base preparation isn't being done up to northern standards. Oh well, it's just tax money. Ours!
It was 30C as we crossed the Bar River Flats. We stopped at Tim Horton's in Blind River which was, for once, not excessively busy. Sandy had a new Blueberry Bloom donut and we talked to a couple from Muskoka on a Valkyrie who were returning from a wedding in Wawa. The rest of the way, we met more than the usual number of non-waving bikes. Not sure what was up with this.
It was ambitious to try to make it from Soo Michigan all the way home while towing the trailer into a headwind. As we were approaching town the fuel warning had been going for a while so I stopped in Lively to top up. I put 23.3 liters into a 26 liter tank. Just a guess but I guess I may have had twenty miles left. Or not.
We looked for Sandy's Butler Mug lid along the by-pass. Remember she lost it on the way out? One time, back in 1978, we found a headlight retaining ring from a Windjammer fairing that Ed Denis had lost two days earlier when the light was hit by a thrown beer bottle in the dark near Renfrew. No such luck this time.
We pulled into the driveway at 5:35 completing another successful Interlochen rally.
Today's Route