We look forward to the VROC Interlochen Rally every year. It's a smaller camping rally held in Interlochen, Michigan near Traverse City and we enjoy the cameraderie.
This would be the first road trip with the camper trailer so I had the wheel bearings serviced last week. The faint rumble I heard on one side was right on the money and the bearing had to be replaced.
We had packed the trailer last night and were rolling by 9:30. It was hot and sunny and the Sudbury weather showed no rain forecast for the next six days but I had my doubts. Traffic was good until Nairn where we got behind what I thought was a slow semi. In fact, it turned out to be a slow pickup truck ahead of him, holding us back because the oncoming traffic was steady.
We fueled in Iron Bridge and I talked to a lady from Nanaimo BC who was headed for the east coast. I gave her some route suggestions to see some of the scenery on the way. In the next stretch, the bike turned over 190K kms (118.066K miles).
In the Soo I called Mom but she was under the weather. We decided to visit on the way back on Sunday instead and stopped for a (not so) quick lunch at McD's. We discovered that Sandy had somehow lost the lid for her Butler mug. I have a spare lid but it's at home. In the meantime, a water bottle fit nicely in the open mug. I also talked to a Wing rider fromMichigan who had been headed for the east coast but, after getting rained on at Watkins Glen and seeing the forecast, decided to ride around Lake Superior.
Wellington Street was closed so we detoured around to the International Bridge. On the bridge, we sat for 55 minutes waiting to get to Customs. You can see that, at the bottom of the bridge on the US side, two lanes peel right. The right one says Trucks Only while the left says Trucks and Cars. Then we have three car lanes to the left. Unfortunately, cars were jamming both truck lanes, leaving trucks blocking the bridge exit. Someone needs to take a critical look at this situation because US bound traffic is always backed way up. The NEXUS lane was closed and the lady agent and I had another good talk about the Terror Watch List. They can block passports so that a legitimate person with the same name as someone on the list won't set off the bells and whistles. She checked and found they can't do the same thing with a NEXUS. 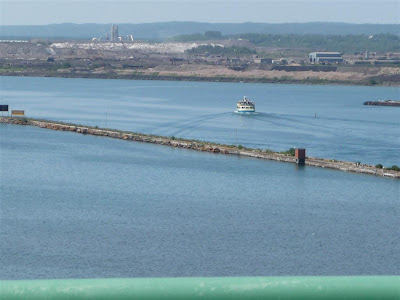 View from the International Bridge as we wait
Once through Customs, we paid the toll. For three axles, it was $3.75 US or $4.35 Canadian. That's some penalty for using Loonies. We finally paid after some lunkhead in the only cash lane open took two minutes to pay. I can tell he was never a Boy Scout.
On the Mackinac Bridge, it was steel grating both ways since all the paved outer lanes were closed for maintenance. As usual. The winds were light, I did the weave and it was a good crossing. US 31 down to Pellston is still pretty choppy, but it smooths out from there to Petoskey. In Charlevoix, one lane was closed as students were working on the flower beds lining the main drag. 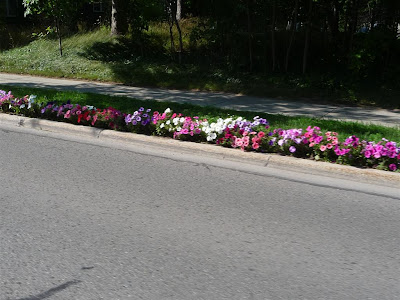 Charlevoix Flower Beds
The ride along the lake was comfortable with a cooling breeze off the water. The GPS turned us on Three Mile Road to by-pass downtown Traverse City. I missed the Airport Road turn and we went completely around the city. Along US 31 into Interlochen, there were a lot of old double decker railway commuter cars parked on a siding. I wonder where they are destined for?
We arrived at Cycle-Moore motorcycle campground at 6:30 PM. Although we were a day earlier than usual, many were here already including Scotty, Marlene, her brother Butch, Ray, Lisa, Zever, Evan, Dee and Paul. Before we could get set up, Stewey (Illinois), Wrong Turn (West (BG) Virginia) and Cheap B (Alabama) pulled in. Our usual site was taken by a large 5th wheel and trailer so we set up in the middle under a tree.
For supper, we tried Giovannis' Roadhouse near the corner of 31 and Long Lake Road. It said burgers and fries out front but they had a full menu and pretty good food. Stewey, CB and Wrong Turn had eaten so they just had dessert. Just. 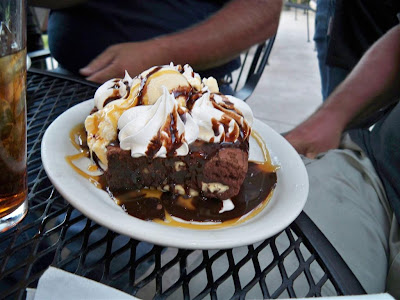 Stewey's Turtle Something Cake
After supper, there was a shortage of firewood so we hung out at Evan's fire. Chunk arrived and so did KT in her jeep from Indiana. After everyone was set up, a few of us moved away from the fire to watch the Perseid Meteor Shower. The best part of the show would be early tomorrow morning, before sunrise, but we did see some spectacular grazers and a huge amount of satellites. It was here a few years ago that Snake (RIP) and I sat out watching the same thing and talking about life, the universe and everything. It was the last time we spent together.
It was nice to be here a day early. Anticipating a great weekend, we turned in about 11:30.

People Around the Fire 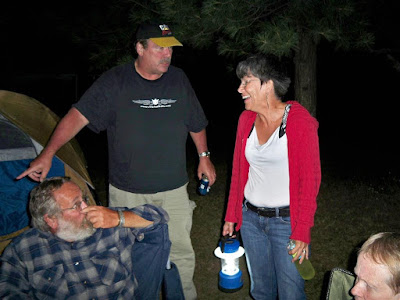 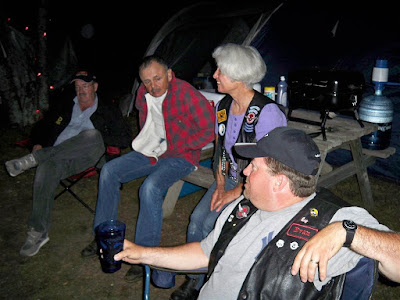 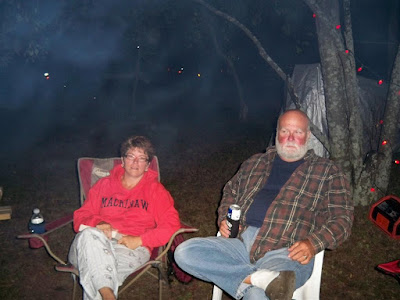 Dee and Cheap B 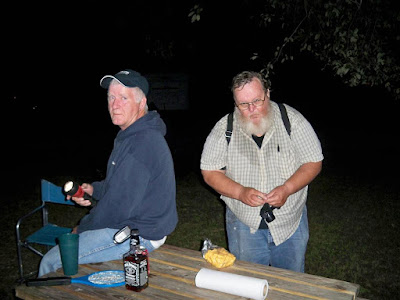