Talk at the coffee table this morning was typical biker stuff; computers, digital cameras and some trailer tips. Then we rode over to Dilbert's for another hearty breakfast.
Riding out the dirt drive, I realized that I have developed a sloppy habit over the years. On the road, I ride with my first two fingers draped over the brake lever. This allows for a faster reaction if I need to slow suddenly. However, in the dirt or maneuvering at low speeds, you don't want to touch the front brake but I still have those fingers hanging there, which can cause me to use that lever if taken by surprise. It hasn't put me down but it has resulted in some pretty awkward moments. Best in those circumstances to keep all fingers on the hand grip. Now if only I could figure out why the rear brake only technique works so well on a bike with the linked front and rear brakes on the Wing.........
Sandy's back was hurting today so we stopped at the new Tom's grocery for pain meds since the pharmacy behind where Grandma's Kitchen used to be has also disappeared. The staff at Tom's were very friendly and helpful but the US doesn't seem to have methocarbamol concoctions like Robaxacet. We settled for the best they had but I'll be riding solo on today's tour through the Leelanau Peninsula.
The group assembled at the Mobil station in Interlochen. It included Stewey, Wrong Turn, Cheap B, Kudzu and Chunk (with KT on the back of his 800). I was given the task of leading and selected a point on Michigan 72 to get us through the many variations of Long Lake Road. Once on 72, we headed towards Traverse City and caught M 22 north along the eastern shore of the Peninsula. It was a pleasant ride except for the cars doing 40 in a 55.
We rode through Northport and on up to Leelanau State Park. It cost $8.00 per bike to get in, although anyone with Michigan plates would have been free. We had none of those. Ontario, Wisconson, West (BG) Virginia, Alabama and Illinois with a passenger from Indiana. That's us, a hodge-podge of happy wanderers. I sat back while the gang checked out the lighthouse, grounds and beach. Chunk was coaching KT on camera work as she composed shots with an old SLR actually using film.
Leaving the park, the next destination was a winery Chunk wanted to visit. He tooke the lead as we returned to Northport and then picked up the continuation of M 22 towards the west. On the way to Leland, there are many good curves but we were cheated out of a lot of them by more traffic doing less than the speed limit. Just past Leland, we pulled in at the Good Harbor Vinyards. The winery wasn't in operation but the vessels were visible from the tasting room. Chunk's objective was a bottle of their cherry wine. This area does, after all, bill itself as the 'Cherry Capital of the World'. After tasting, KT bought a whole case and Wrong Turn offered to cargo net it to his Wing. 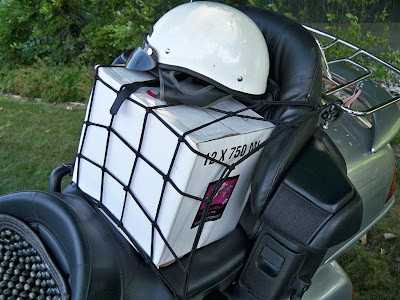 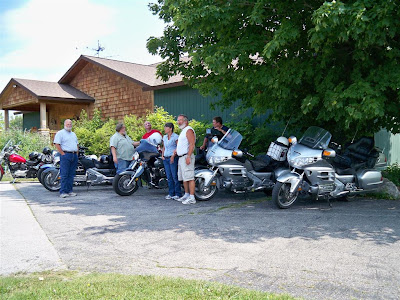 The group at Good Harbor
From the winery, I led again as we continued our wander to the west. Stewey had gone ahead to set up and get some photos. After we went by, I slowed to allow him to catch up and then stayed slow as we followed a line behind a white pickup truck doing what had now become the typical 40 in a 55. More good curves wasted. In Glen Arbor, we lost the truck but M-22 south was closed and we had to detour on M-109. Not far from town, a car slowed to turn right and the car behind him stopped. The following SUV didn't expect him to stay stopped and almost hit him triggering a round of horn blasts, gestures and shouting. We were behind the SUV just taking it all in but choosing not to participate.
We skipped the Pierce Stocking Scenic Loop, a National Park facility with an entry fee, and continued down to Empire where some stopped for fuel. Coming off 109 onto 22, a slower pickup truck actually pulled over to let us by. Amazing and much appreciated.
From Empire, Chunk was taking the group to see another lighthouse but I decided to break off and get back to the campground to see how Sandy was doing. Stewey opted to go with me. The two of us howled down M-22 until I missed the turn into Deadstream Road and we needed to make a U-turn and go back. Deadstream is 35 MPH for the first part and I was trucking along at somewhat better than this. I did wave to a Harley Rider just getting mounted at a small restaurant. Stewey told me later that this was a Motor Officer and he slowed down for a bit just in case we had caught the officer's eye. I guess not, because we didn't see him again. We caught US 31 in Honor and were back at the campground by 2:40. Sandy was some better and I caught a nap before everyone else got back.
The group split for supper. Some went to Frankfort for perch, others to Rico's for pizza. Sandy and I went back to Giovanni's where I used their WiFi to check my mail while waiting for my meatball sandwich, Sandy's wings (a bit hotter than she expected) and our shared Turtle brownie dessert.
The bonfire was roaring after the sun went down but a few of us who travel the most gathered at Wrong Turn's trailer for a bit to talk travel plans and swap some tales. It seems a bit anti-social but we usually end up congregating like this from time to time to catch up on who is going where. While there, we called Sherm and passed the phone around.
Stewey said the phone radar showed the black clouds buuilding would probably miss us to the north. True to form, the lightning and rain started about 10:00 PM and everone moved into the covered pavilion. I went to bed about 11:00 and the rain continued most of the night.

I'm sorry that Sandy missed riding around the Leelanau Peninsula. I would have loved seeing the lighthouses. I hope that Sandy's back feels better now.