I slept in until 8:00 AM this morning. This normally wouldn't have been an issue except that the air bed was set up in the family room. Everyone was being very quiet when they should have just tipped the bed over and gotten me moving. Still, it was a very good sleep.

Kim and Sandy started cooking for the potluck part of the shower and began to get things organized while Mike went to the grocery store to get a few things. It was -17 here but TWN said it was -32 back in Sudbury, another yo-yo drop from the mild temperatures yesterday.

I did some Blog work (I always seem to be behind in the winter) and played with Jolene and Robyn. When Mike got home, the four of us went out and played in the snow in the back yard. 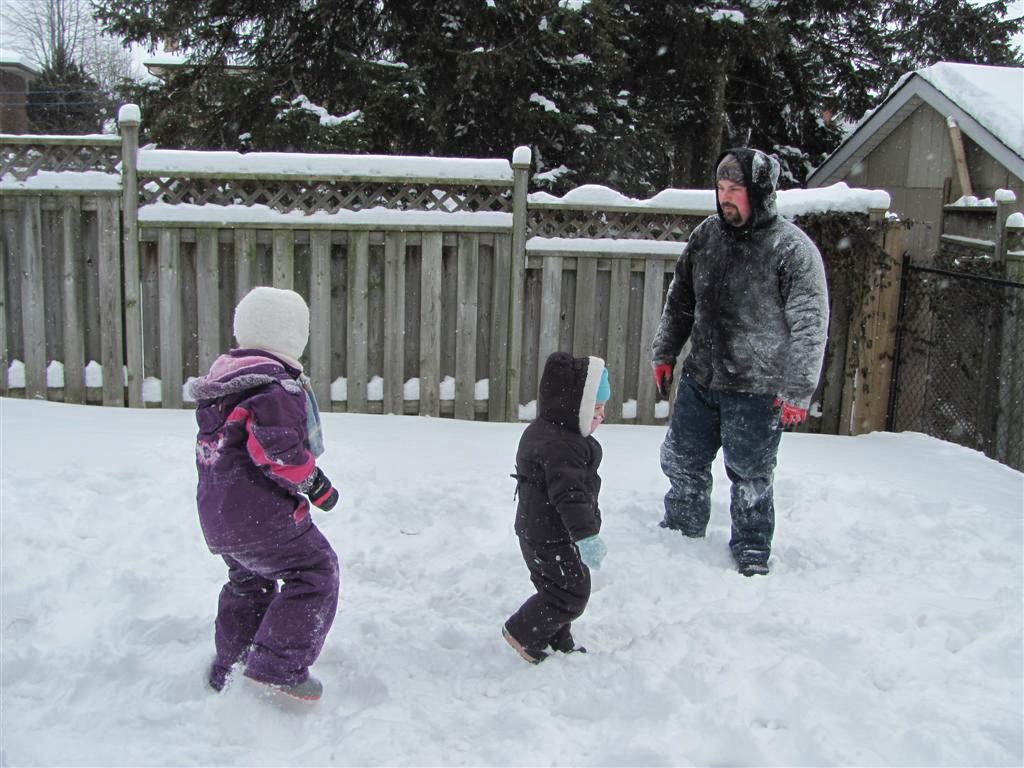 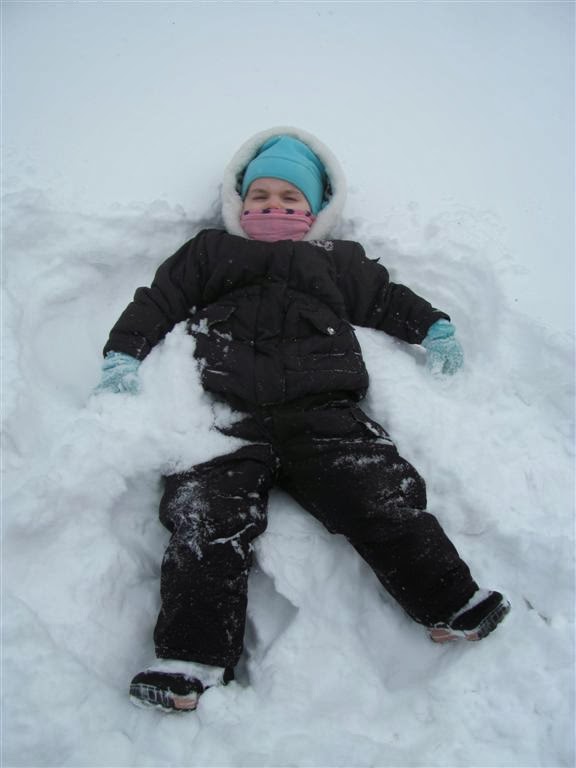 An angel making a snow angel 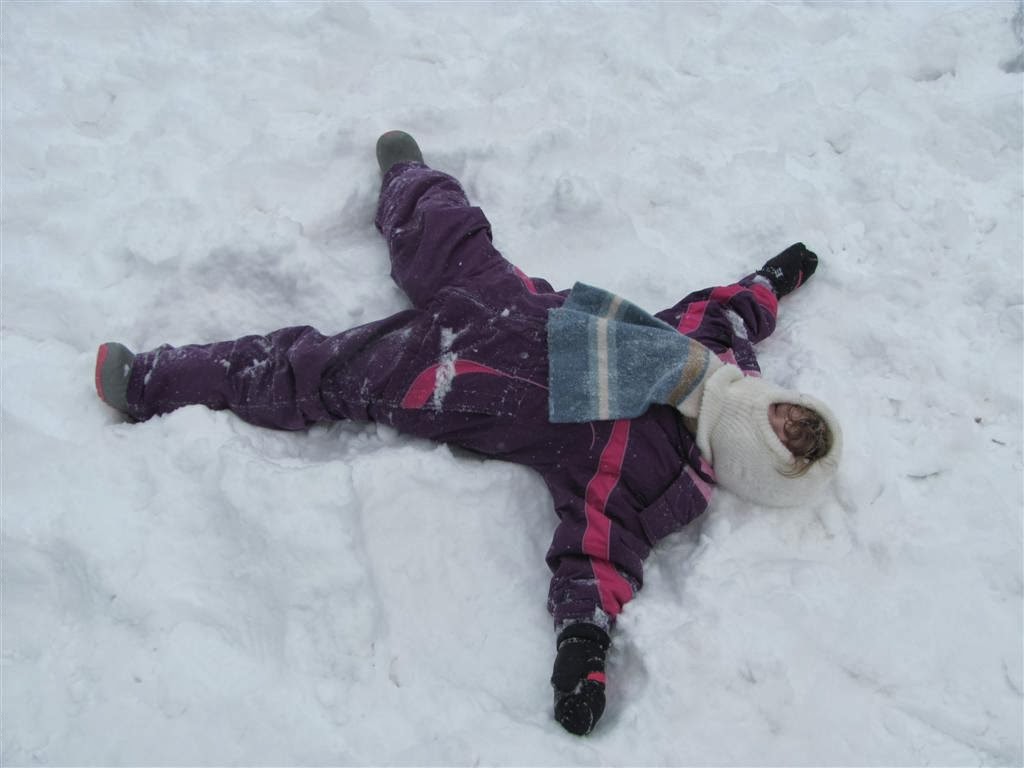 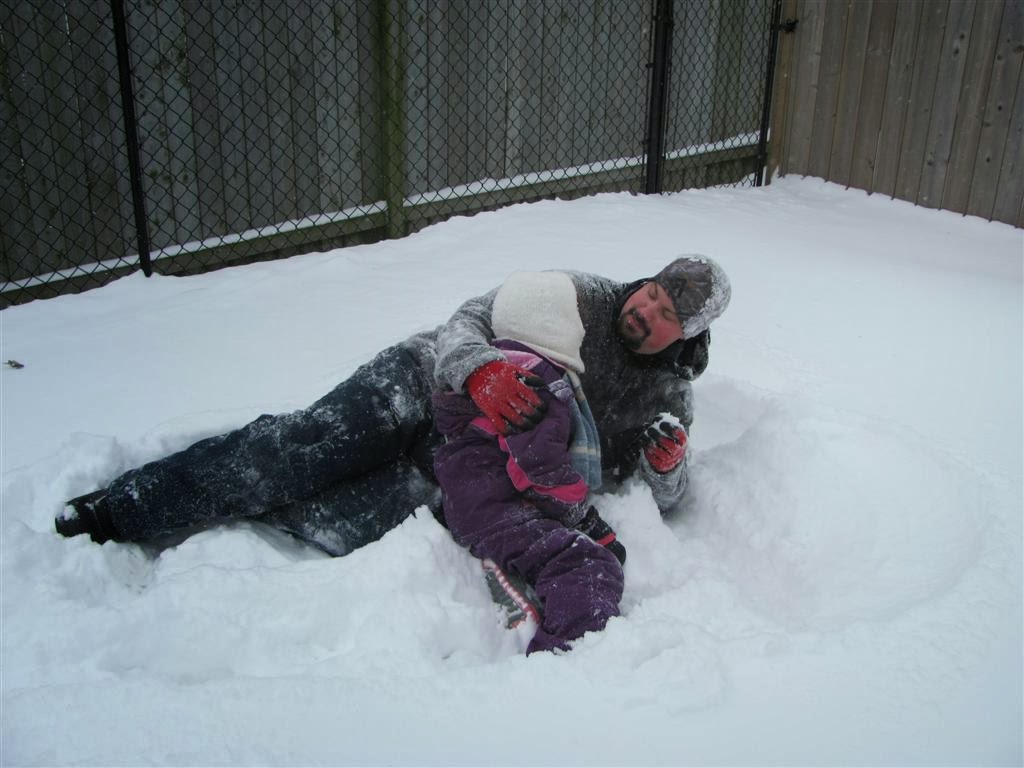 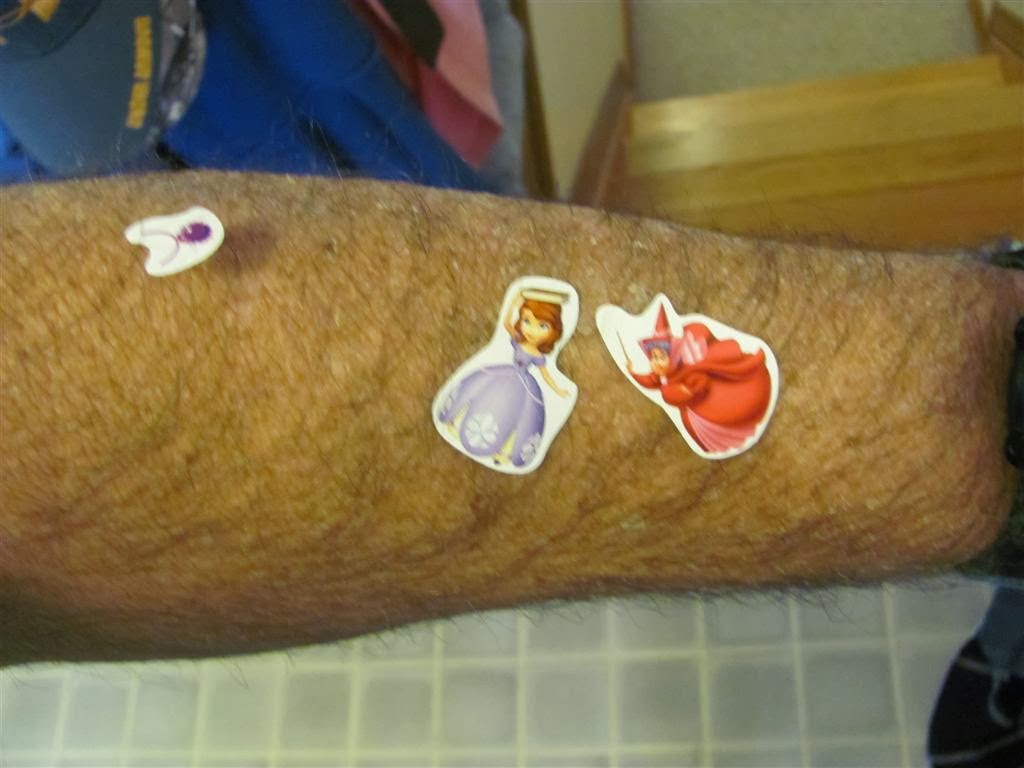 At 12:30, we loaded all the shower goods into the Avi and I took Sandy and Kim to Kitchener. The roads were snow packed but we got there without incident. It took a little work to find the Williamsburg Community Centre in the mall lot. They built what resembles a small town street of shops and the hall was on the back side. Very quaint in a modern kind of way. 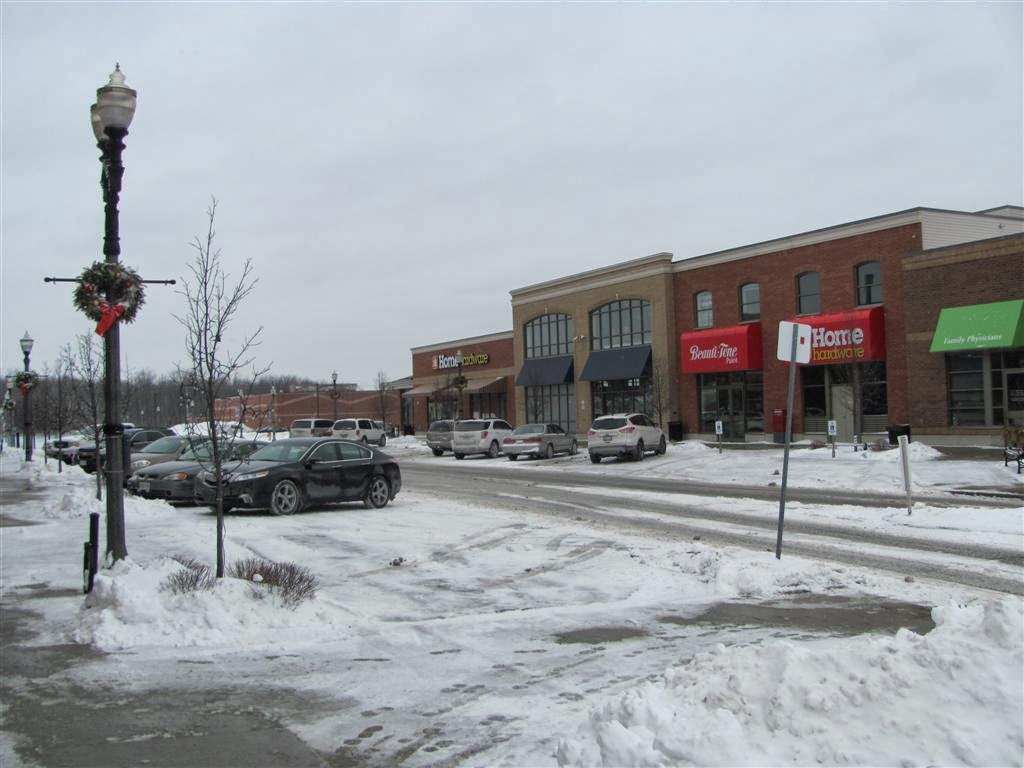 A unique kind of strip mall 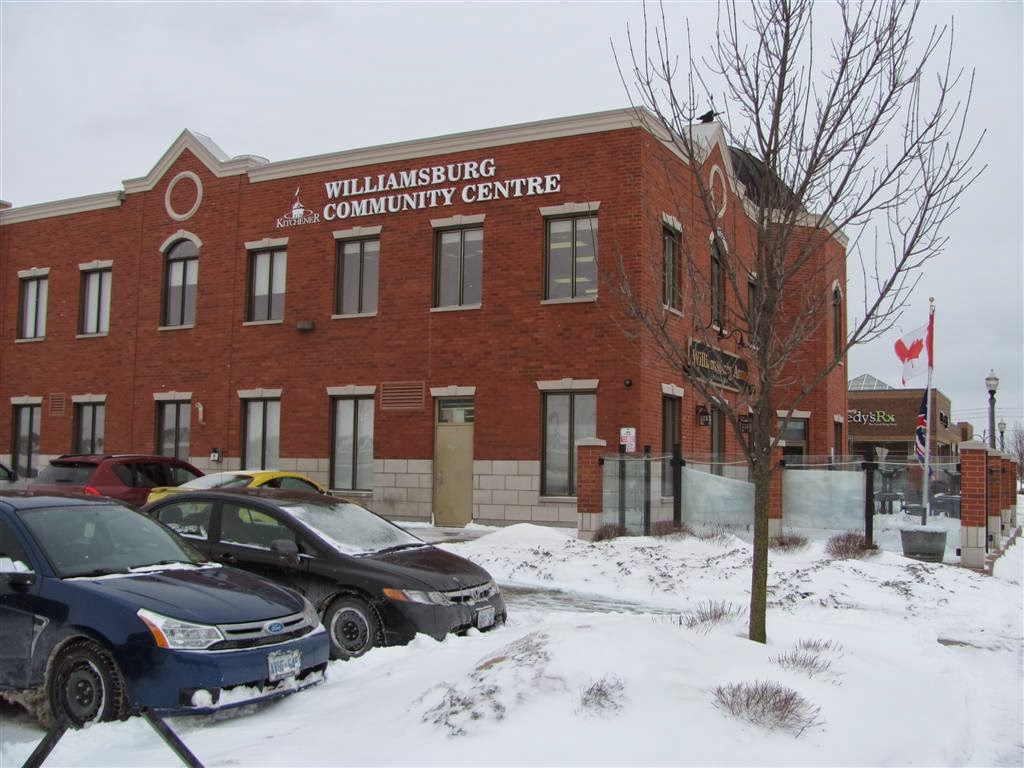 And here is the hall

The hall was on the second floor but they had an elevator. It was probably the slowest elevator I have ever seen (there was a sign on the panel that said "Slow Elevator"), but it worked and we got all the stuff upstairs. Wojtek and Agnes arrived, as did Zofia and a few other organizers. The church group who had the place booked before us was just leaving, so we got to work and set up the tables and chairs. Then the ladies set the tables while Wojtek and I filled balloons with helium and helped out where we could. When all was ready and the guests started to arrive, the gentlemen made themselves scarce. 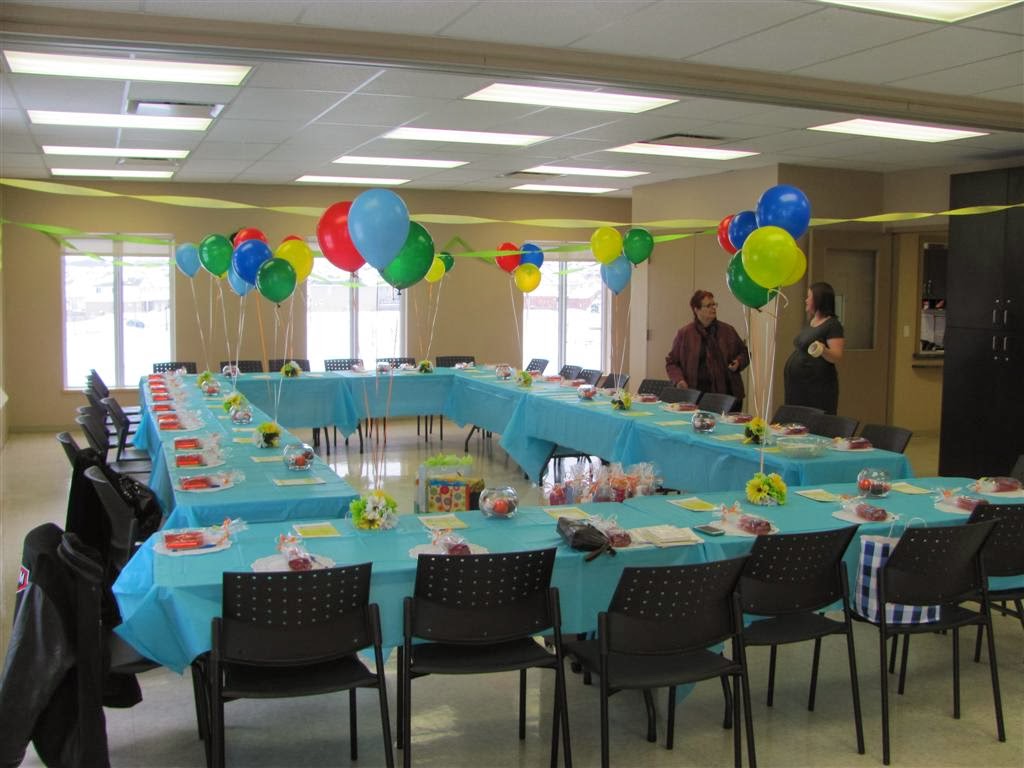 The table setup is coming along nicely 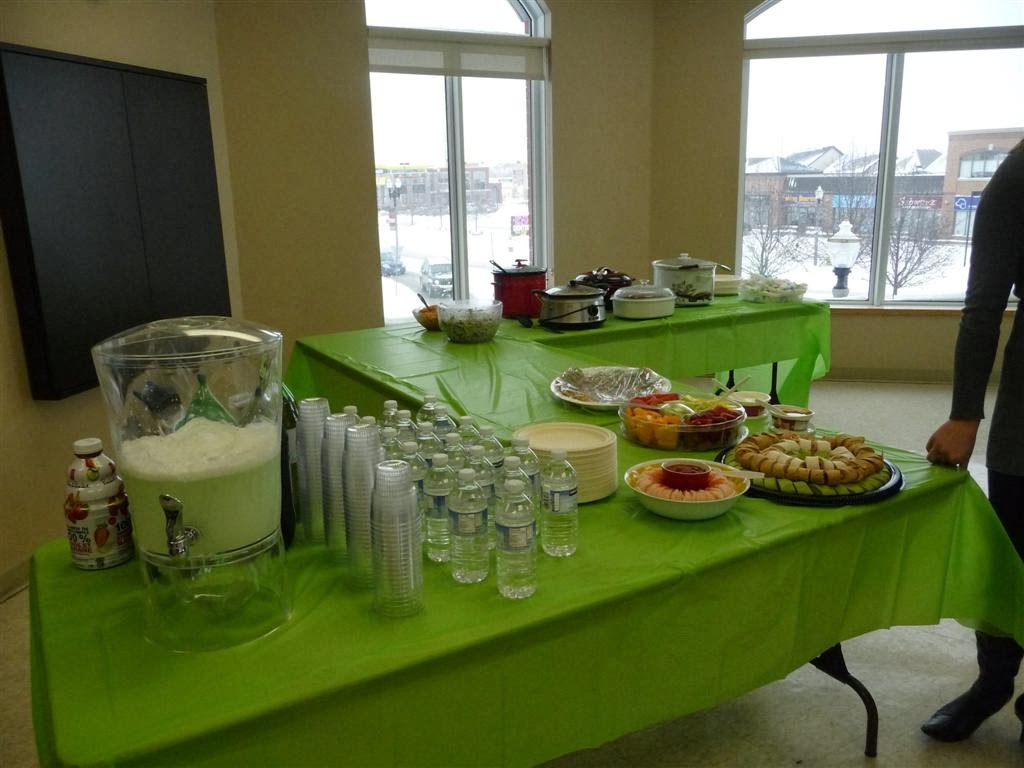 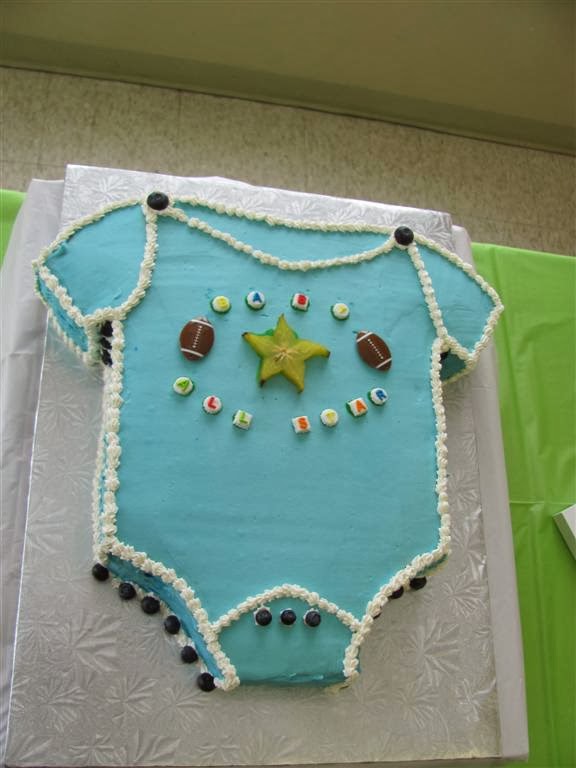 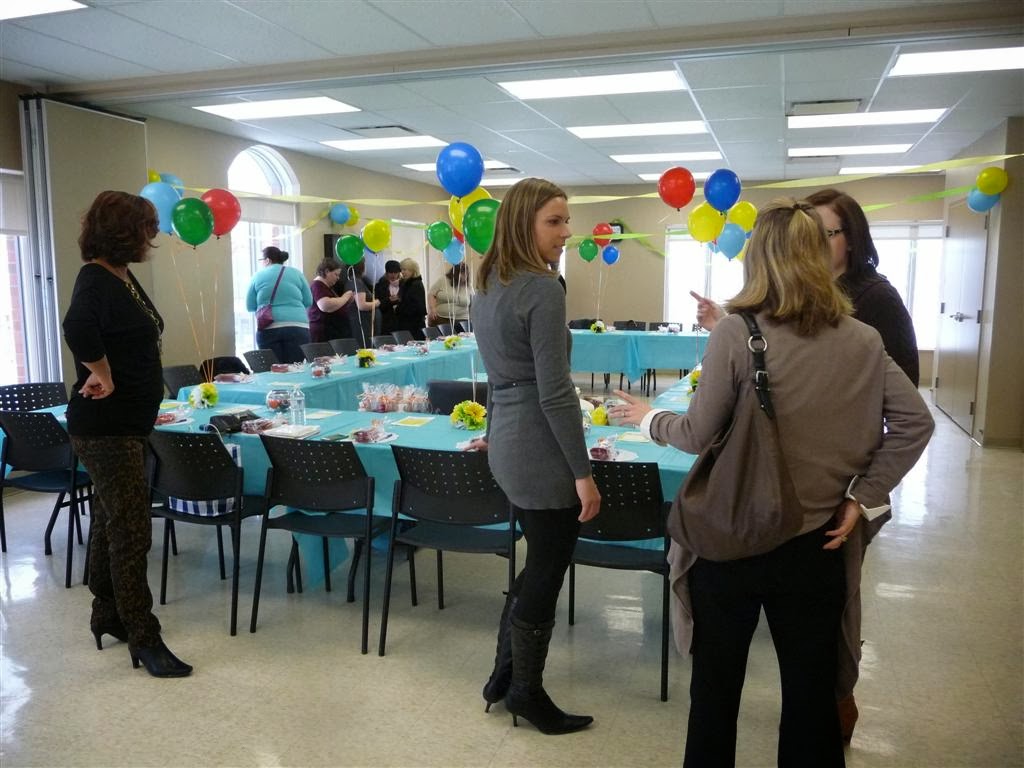 The ladies deciding what to do next

Sandy's photos of the shower 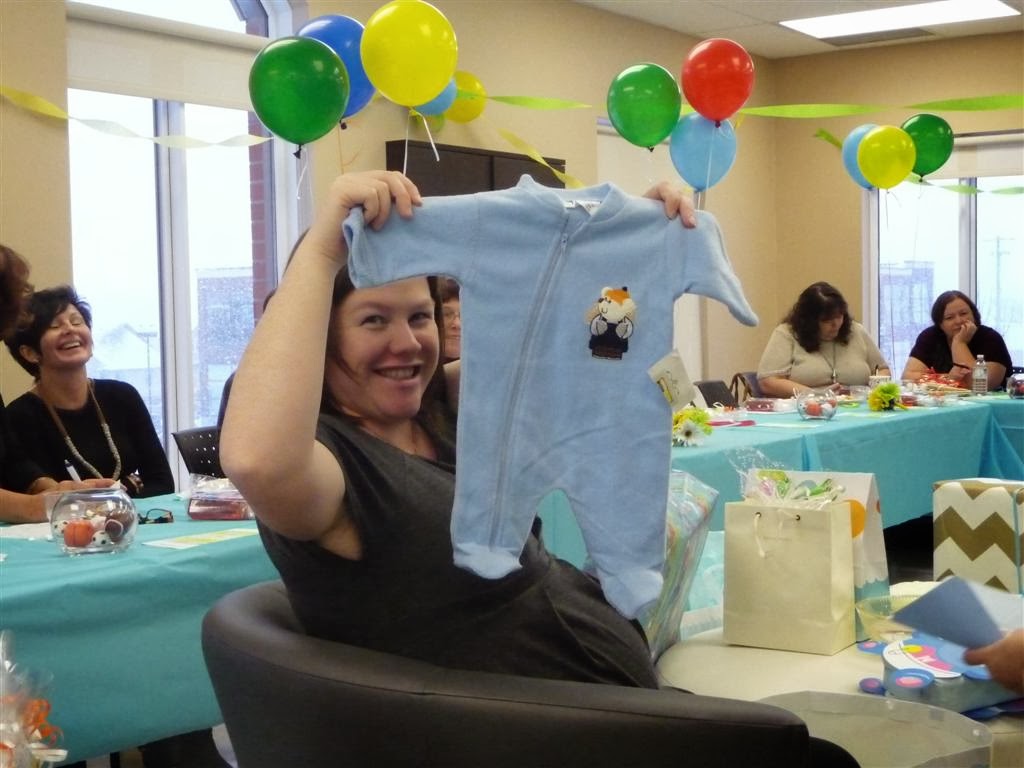 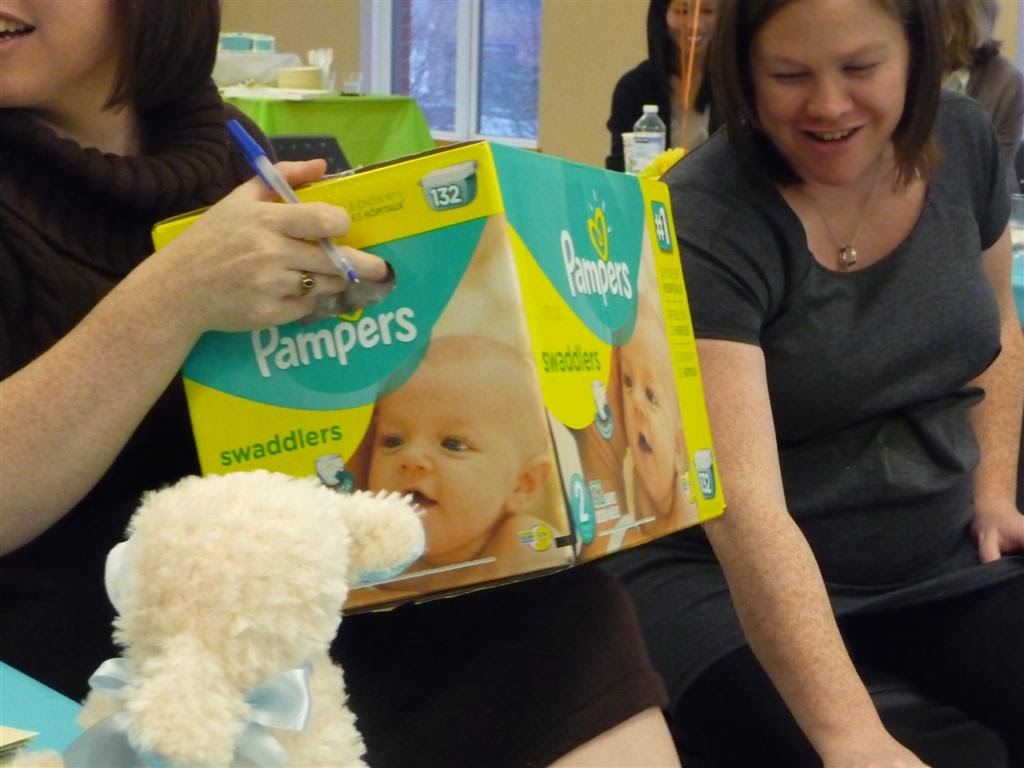 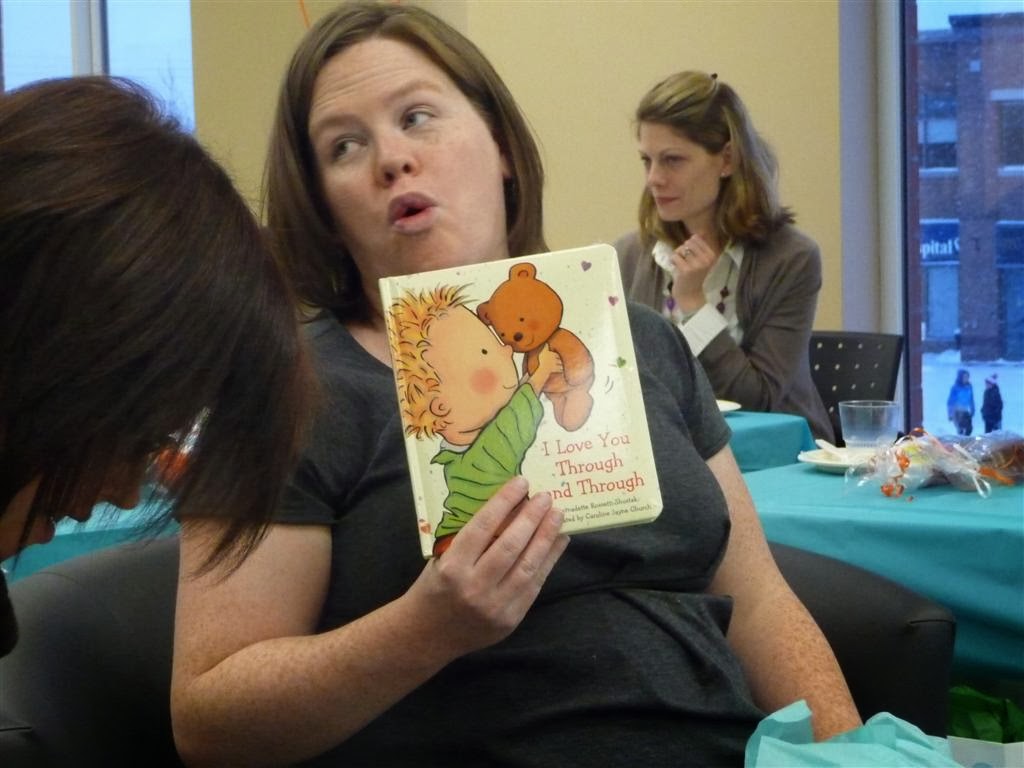 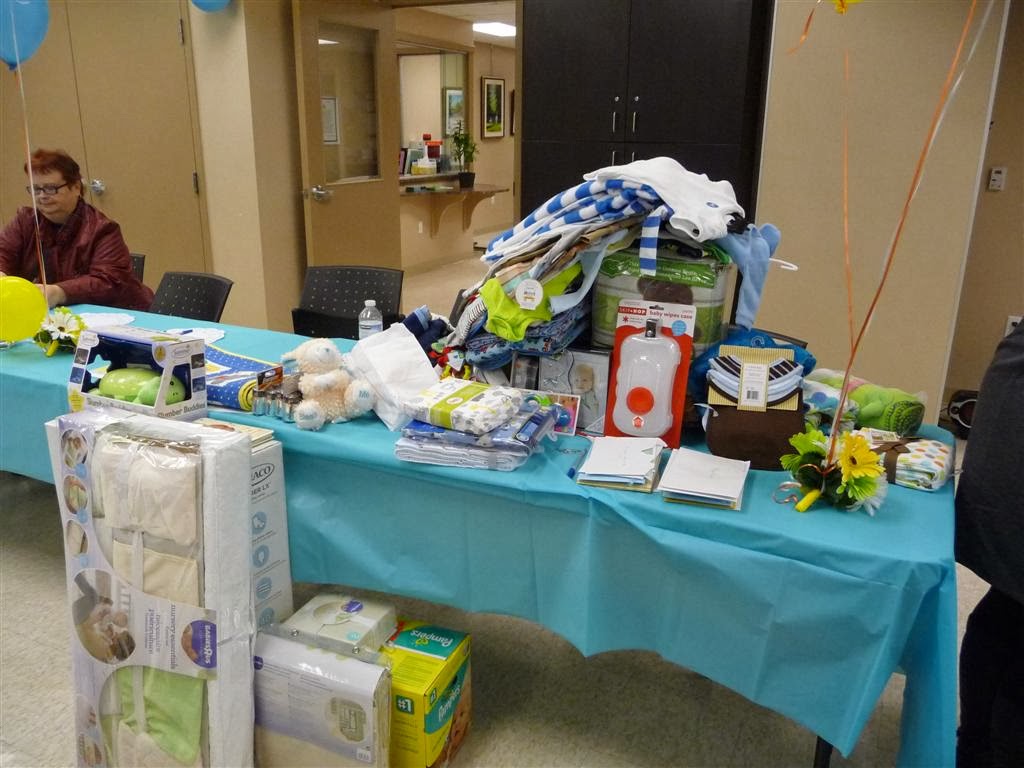 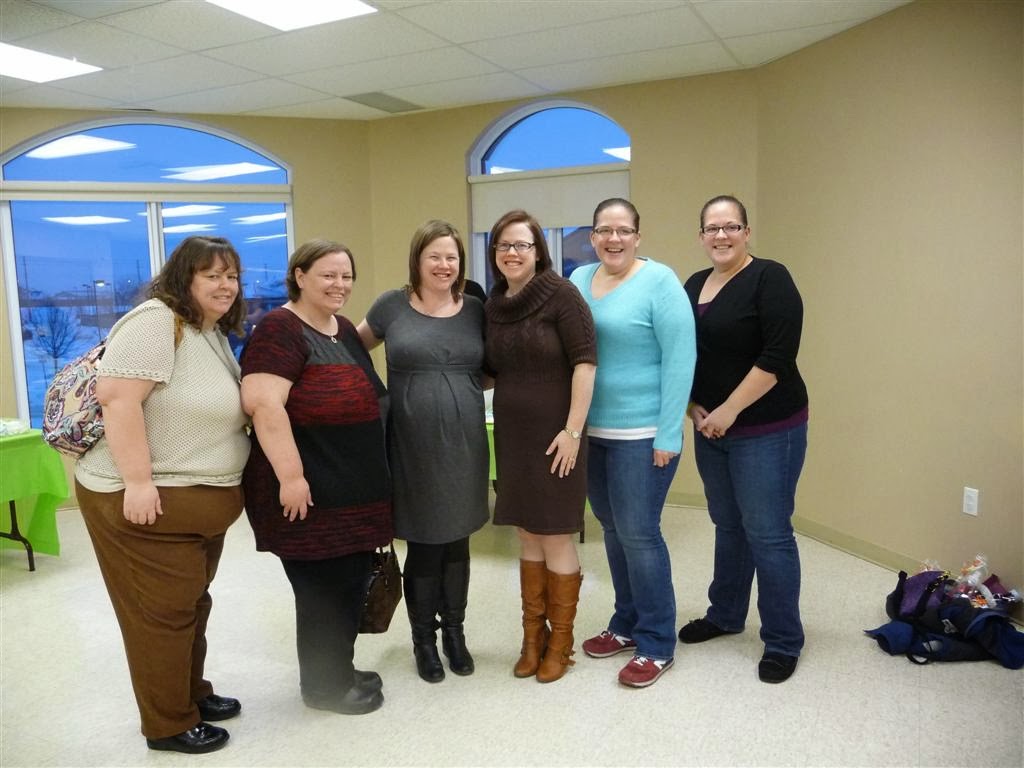 I stopped at a PetroCan on the way back to Cambridge. They were out of regular gas due to people filling up because more snow was forecast, but all I was looking for was a couple of jugs of windshield washer fluid. Back at the house, Rob showed up to hang out after dropping his wife Jenny at the shower.

We decided that I would get Jenny when I picked up Sandy and Kim. I left at 5:00 PM and took almost forty minutes to get to the hall because it was now actively snowing and the roads had deteriorated. We spent some time helping undecorate the place and put all the chairs and tables away. From all the gear we put in Heather and Tom's Tucson, it looked like she had made out like gangbusters. All stowed, we were on the road back to Cambridge by 6:20. The return trip took another forty minutes.

At the house, Mike ordered BBQ delivered. We had pulled pork, brisket, meat loaf, fried apples, potato salad, onion rings and fries. It was pretty tasty for delivery food. After Rob and Jenny left, I finished my outstanding Blog entries. Since I got back to the house, I hadn't been able to access my Gmail account and assumed it was down because they had significant outages on Friday. Not so. I had just switched back to Firefox as a browser and something had gotten twisted. Deleting the history got everything working again.

Later in the evening, we watched the Grammy Awards and I realized just how out of touch I was with modern music. If Def Punk is an example of where music is heading, I'll stick with the oldies. Before the show was over, I headed for bed (which wasn't very far considering the bed was right next to the couch).
Posted by Jim "Skid" Robinson on 1/26/2014