Time to head home again. We woke up a little after 6:00 AM and got everything packed and loaded. The weather radar showed some active snow along our route but all the highways appeared open. Light fluffy snow had fallen overnight and, while it was piled high on the vehicles, it was easy to brush off. Kim loaded the girls into the Caravan to take them to the babysitter about 7:20. so we said our goodbyes and left at the same time.

We stopped at the McDonald's in Hespeler to grab some breakfast to go (don't tell the dietitian). The temperature was -12 and the skies were clear, although evidence of the overnight snowfall was all over the roads. We headed towards Guelph on Highway 24, deciding to avoid Monday morning Toronto traffic. Everyone was moving slowly and we crawled a few places as quite a few vehicles tried to make left turns from the two-lane road across heavy traffic going the opposite way. 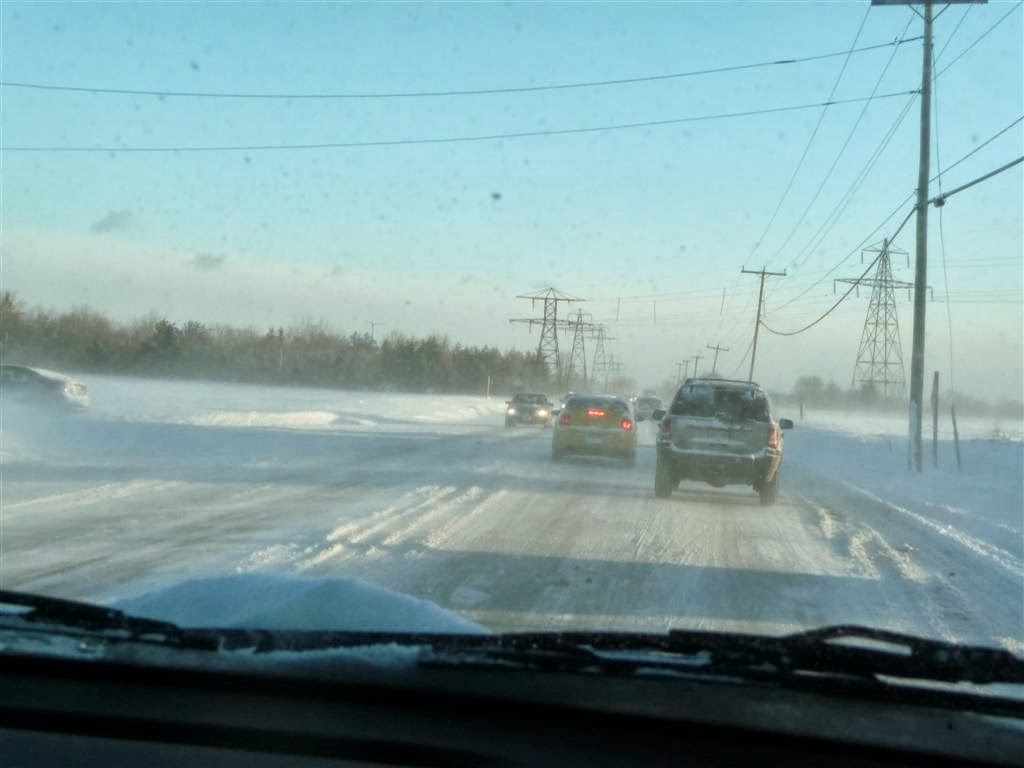 We left most of the traffic in Guelph and had 24 pretty much to ourselves for a while. Before long, we caught up to the snow. Visibility near Erin, where we stopped at Tim's for a pit stop, was down to zero in some spots. But again, four wheel drive and lots of experience driving in marginal conditions prevailed. 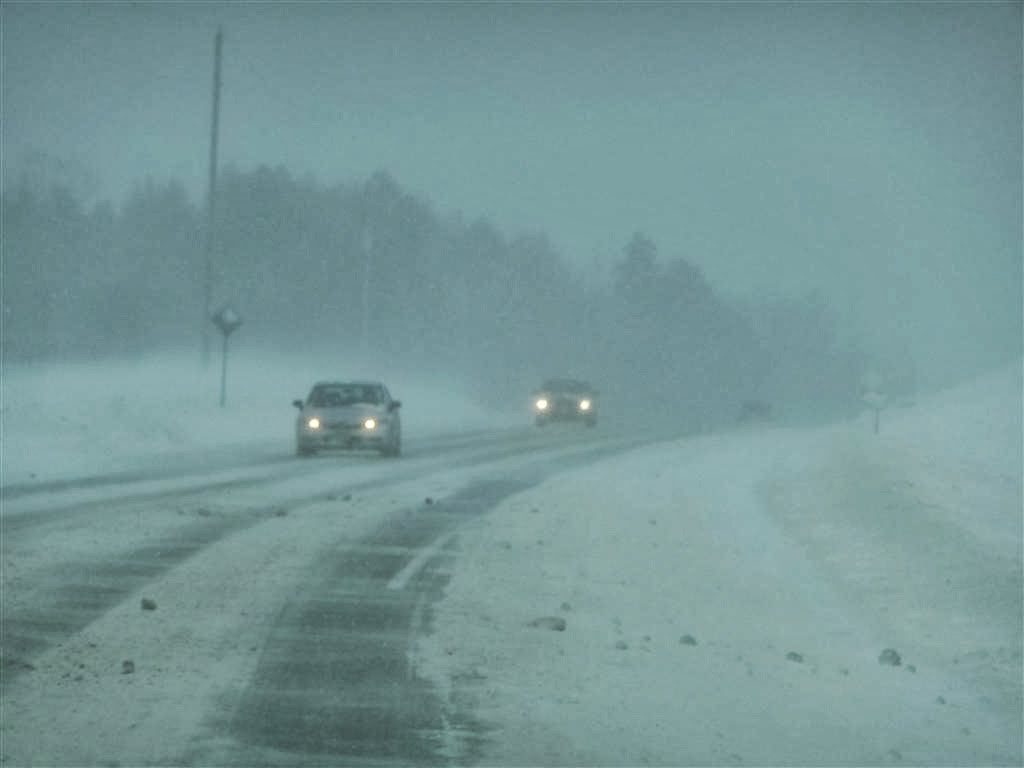 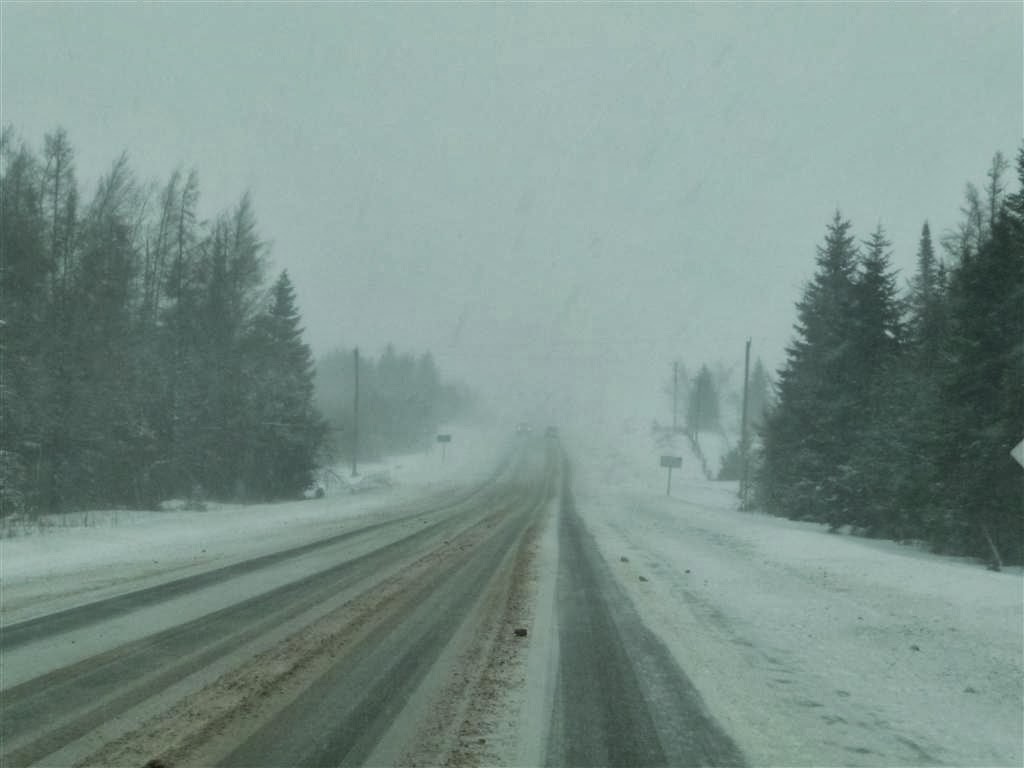 I call this greasy road conditions 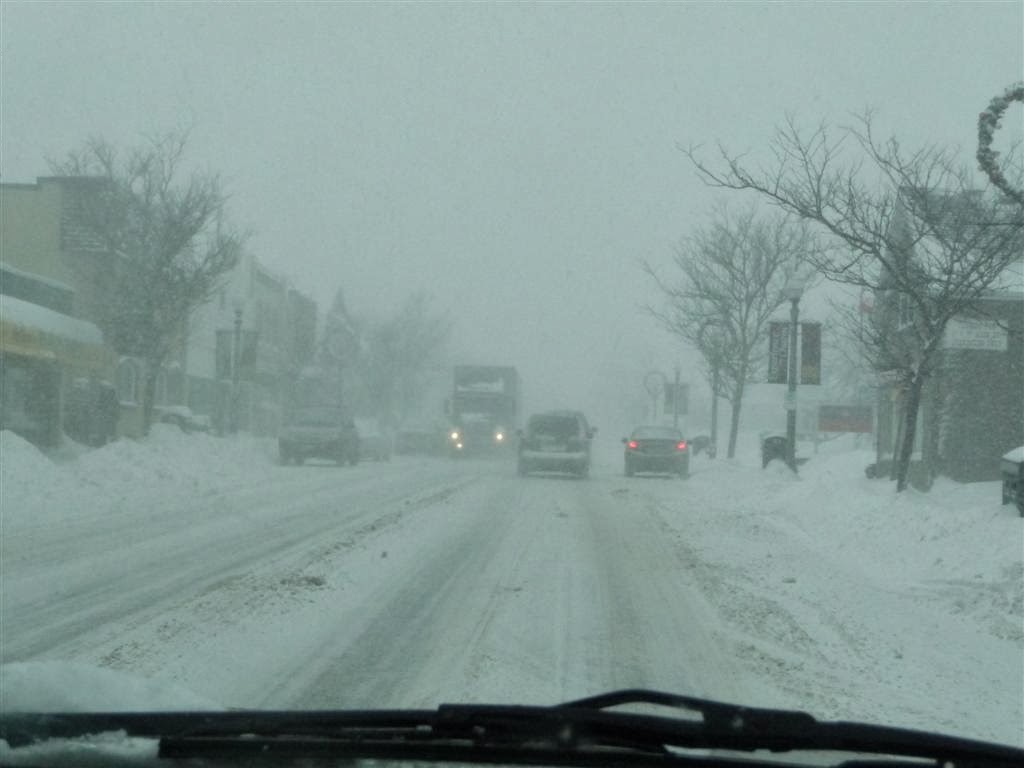 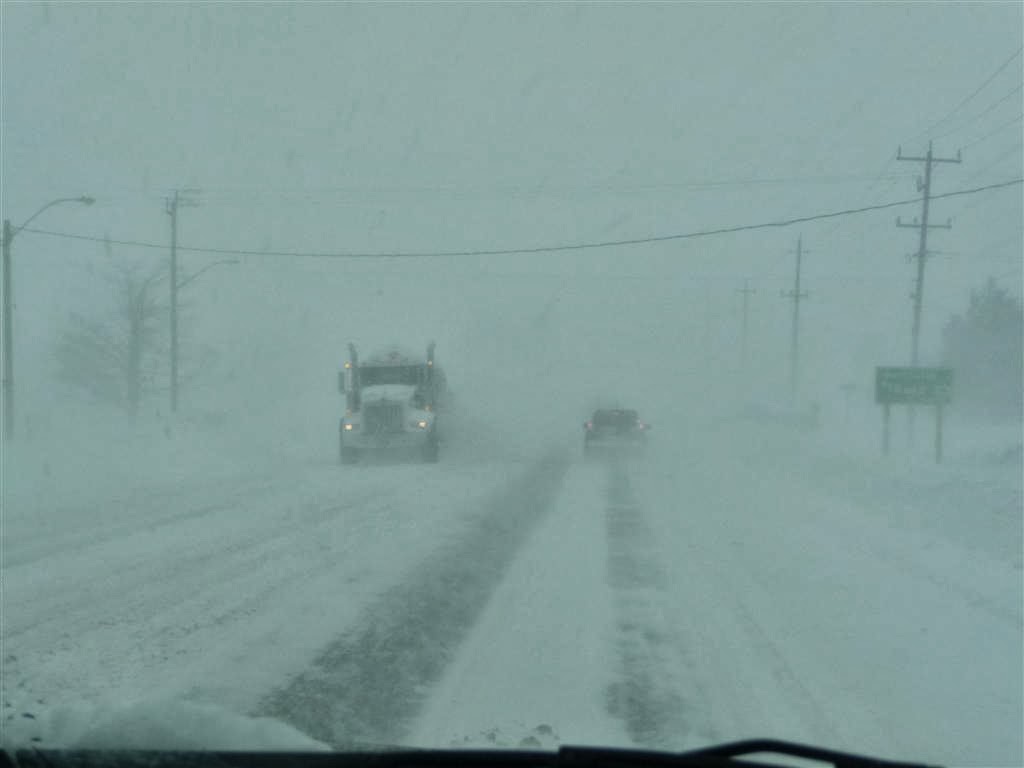 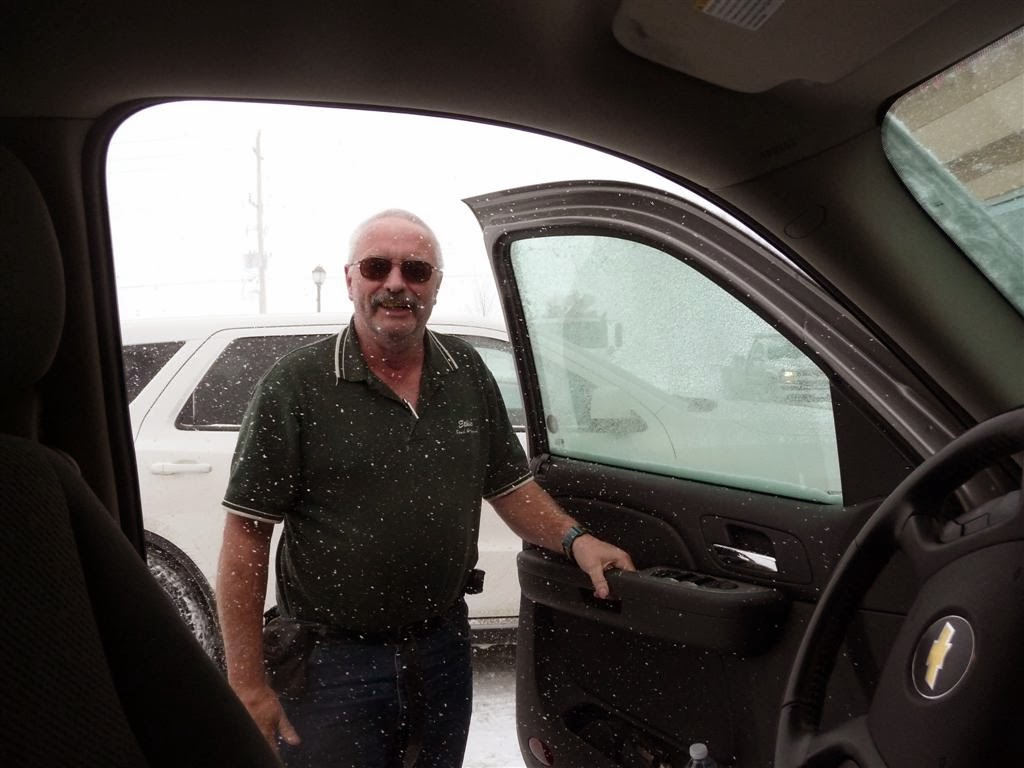 We don't need no stinkin' coats

By Caledon, the snow had stopped and we saw blue skies head. By the time we got to Highway 400 North things were looking pretty good, although we saw plows with their blades down on bare pavement. Really?. But the clear skies only lasted a little while and, by the time we reached Barrie, we were back in whiteout conditions. 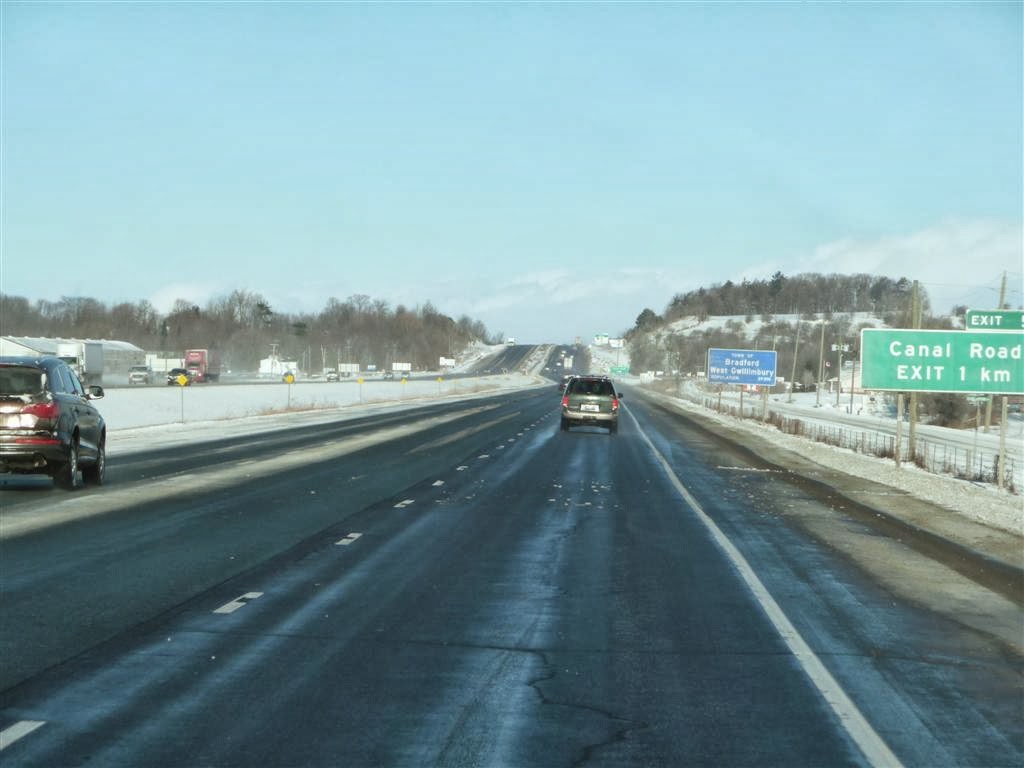 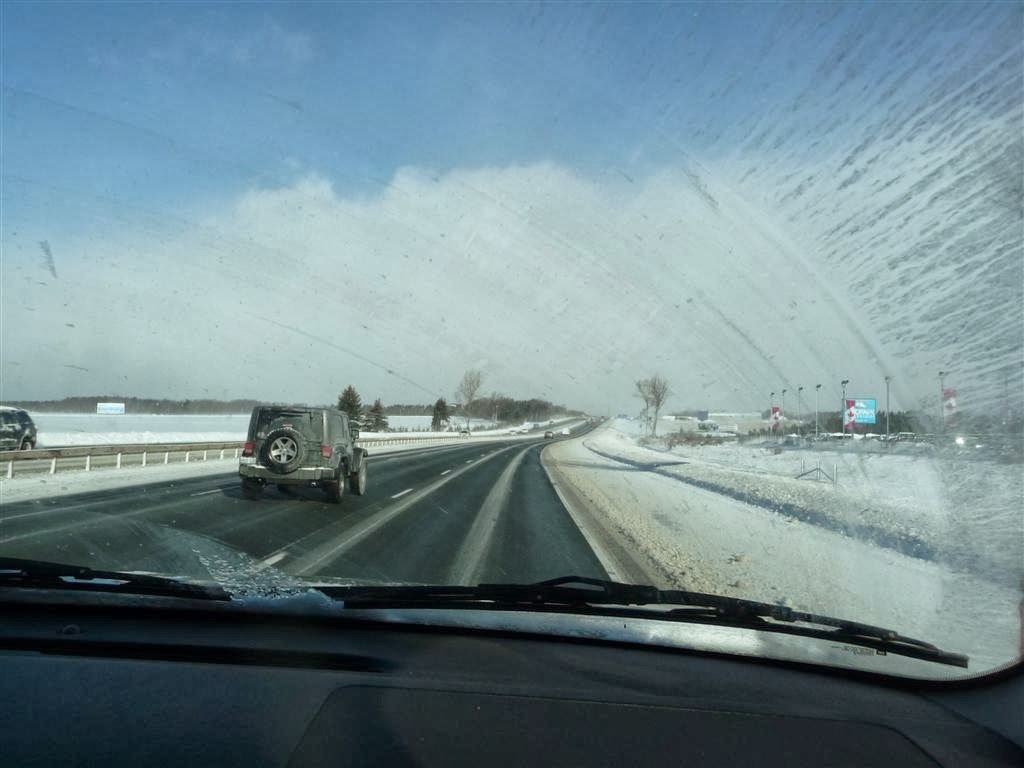 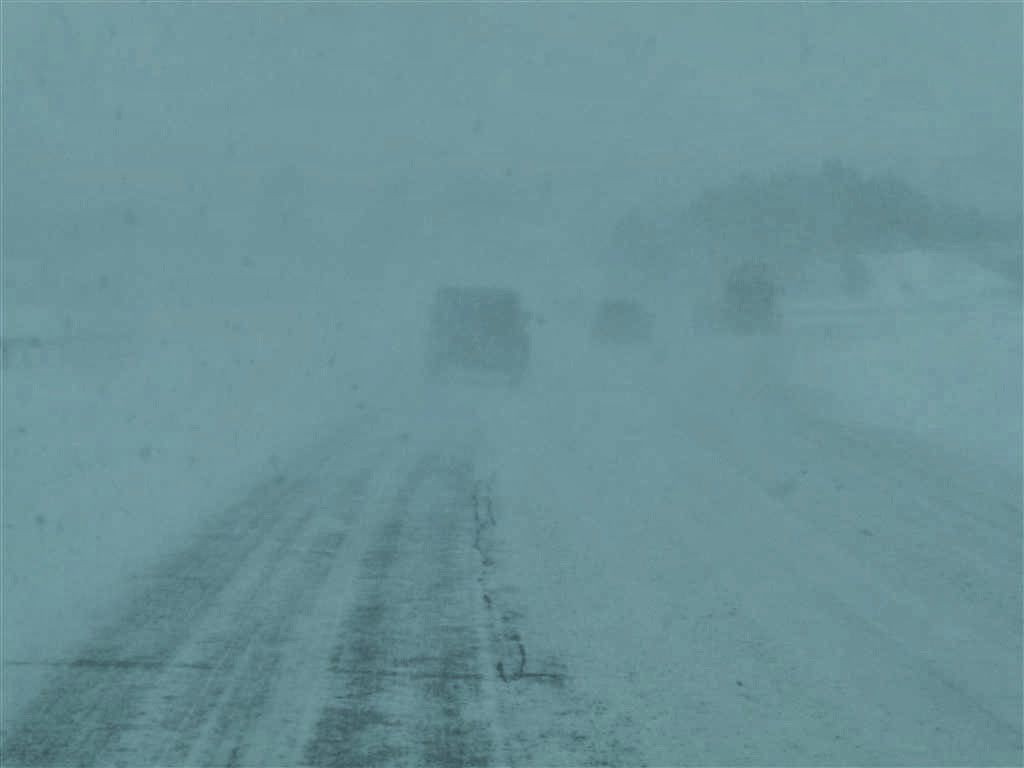 Back into it approaching Barrie 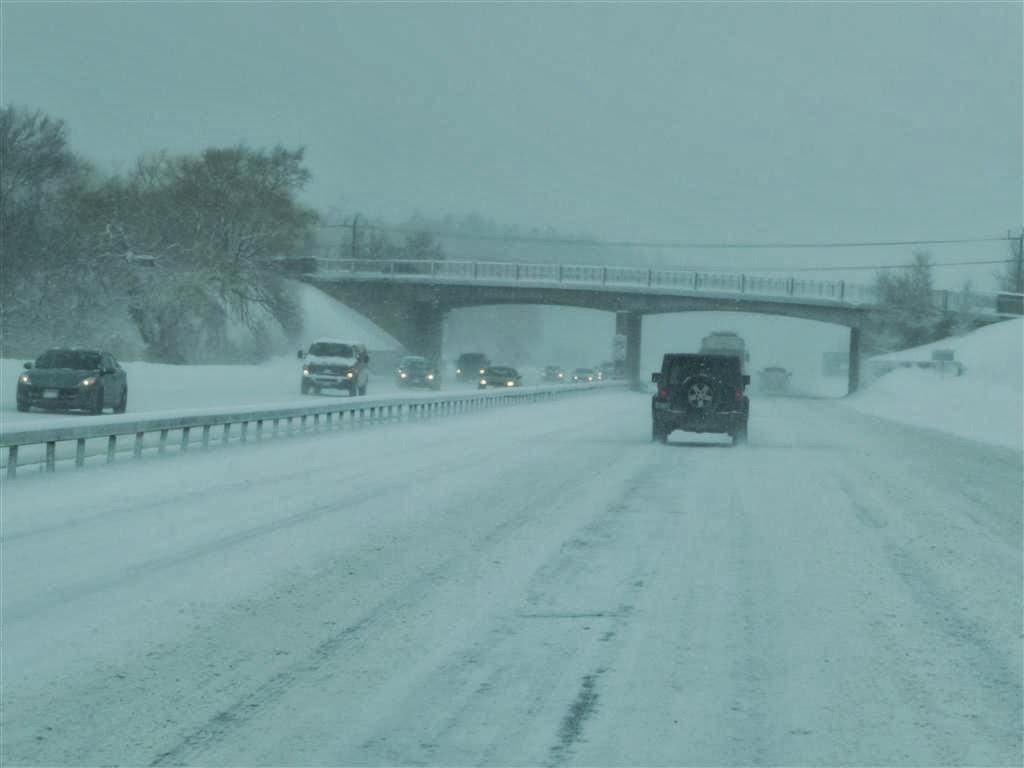 A bit clearer at the Bayfield exit 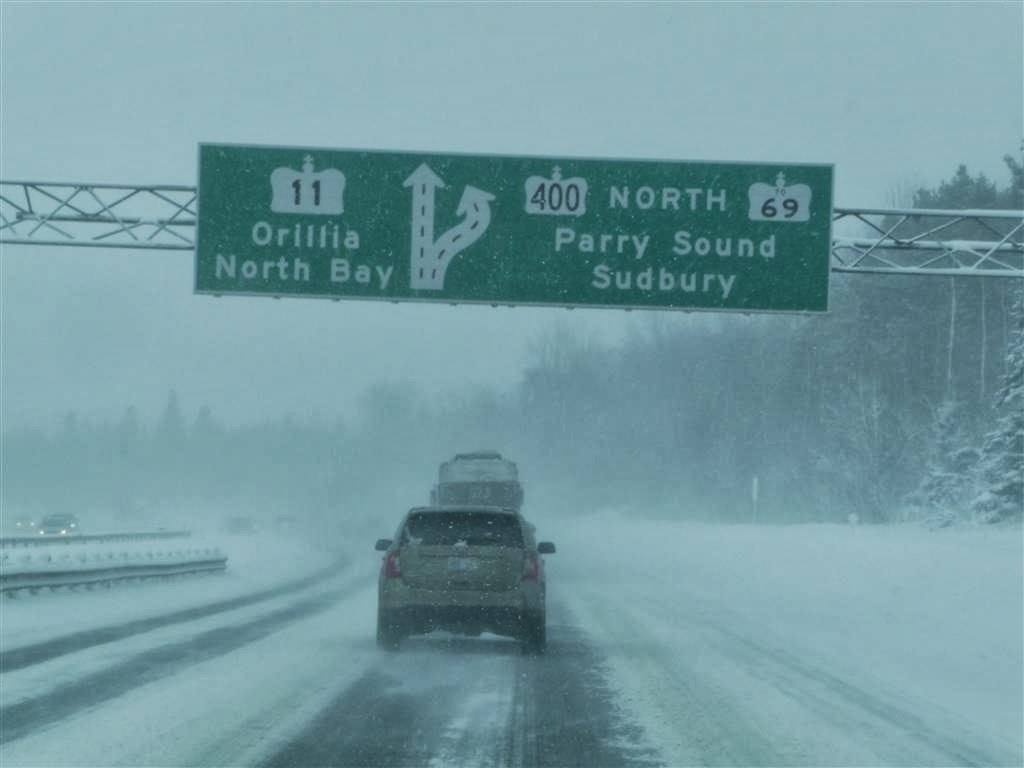 This is our exit

North of Barrie, the road was snow packed and we only had one good lane to travel in. That didn't stop a few cowboys from passing us but that was too risky for me. Weighing a few minutes saved against ending up on our roof in the median, I stayed in line of sensible vehicles and left plenty of room.

Passing the Mt. St. Louis ski area, the skies cleared again and we were able to pick up the pace. We stopped again at the new Petro-Can at the Honey Harbour exit for a pit stop and then had the road pretty much to ourselves for the next fifty miles to Parry Sound. 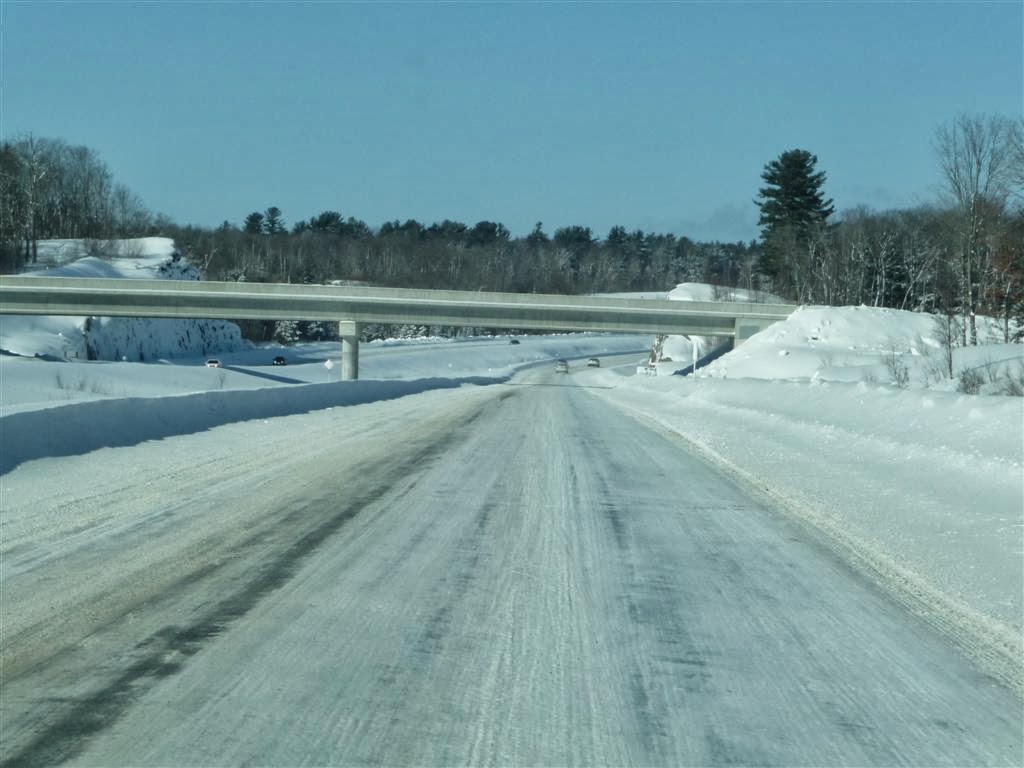 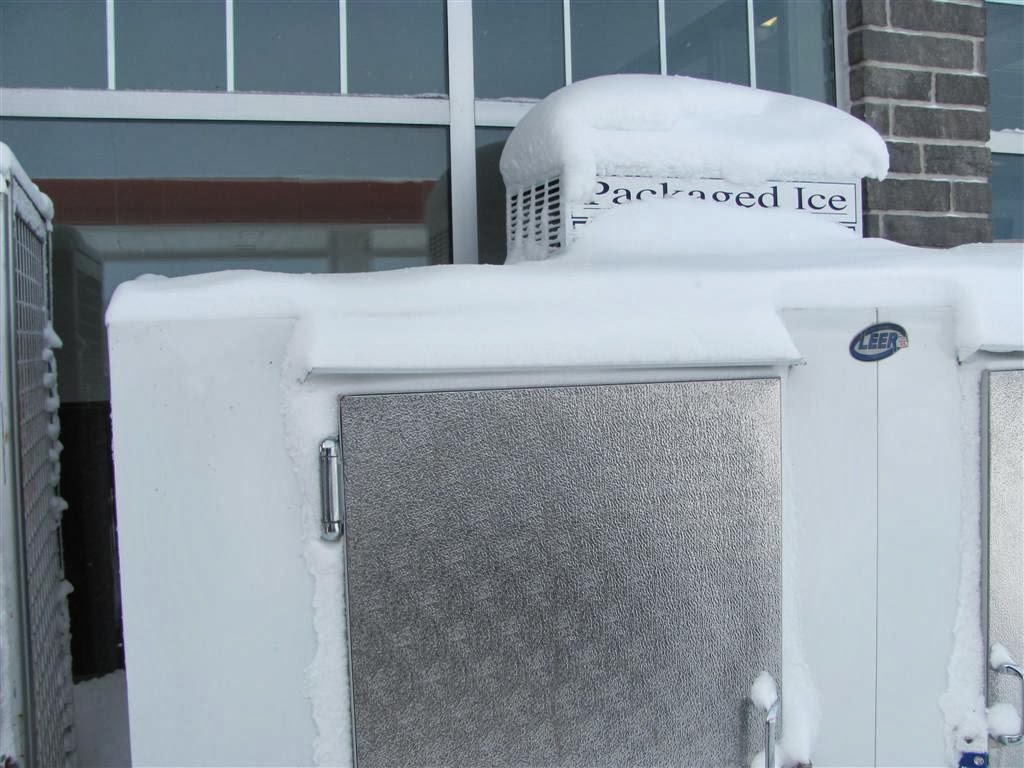 Ice, anyone? I think not. 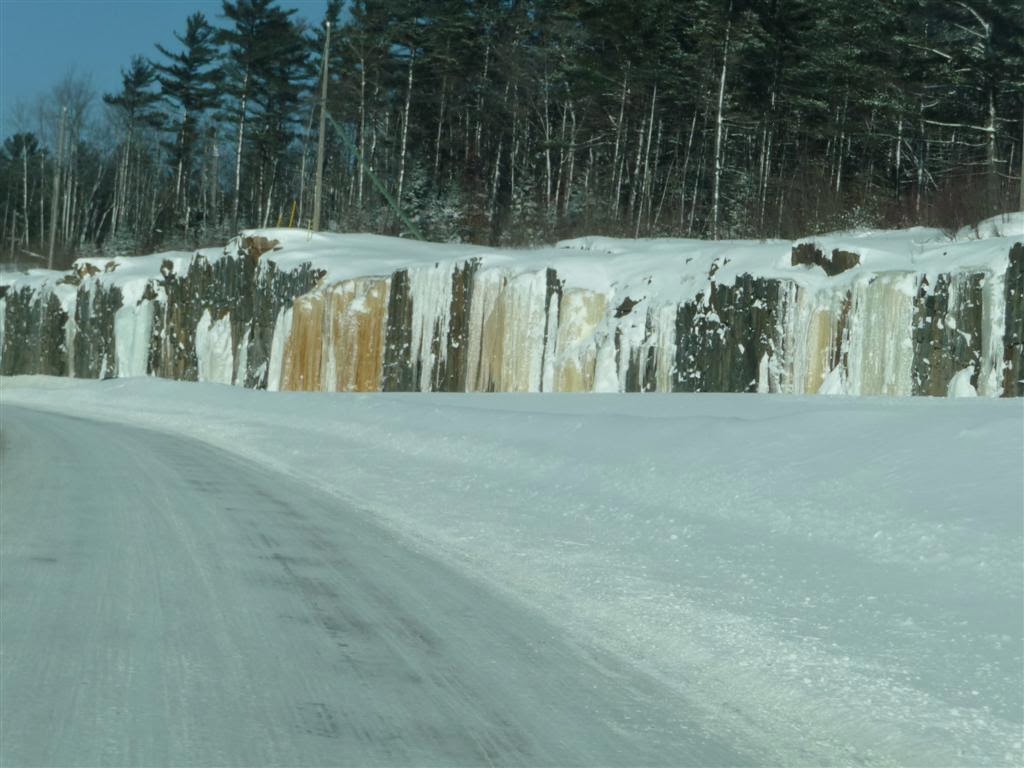 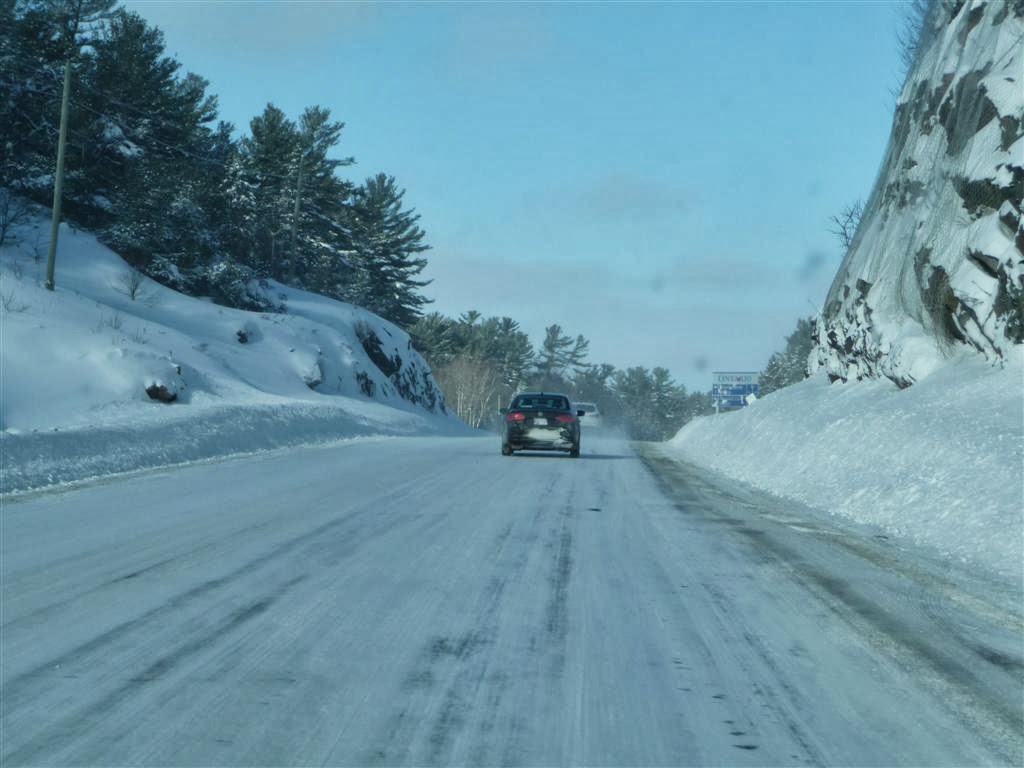 No salt down near Pointe Au Baril

With forty miles to go, we crossed the French River Bridge and entered what I consider to be the true Northern Ontario. Maybe some day there will be a sign on the bridge welcoming people people to Canada's 11th province and we won't have to put up with those yahoos down at Queen's Park any more. 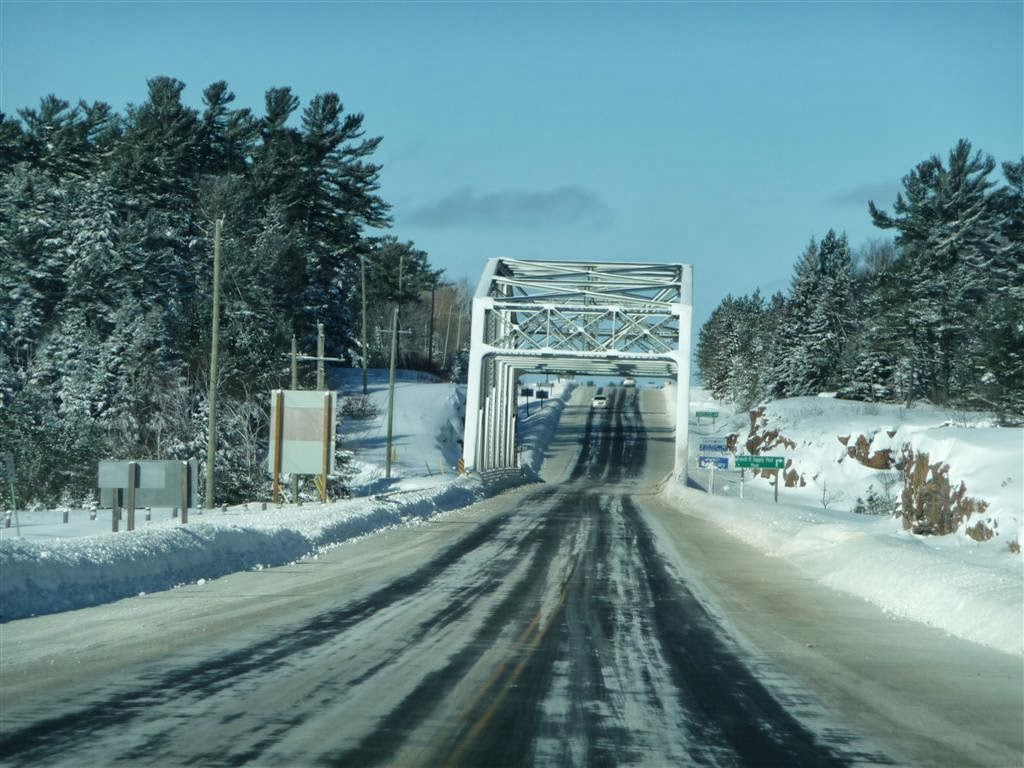 We arrived at Municipal Road 55 at 1:57 PM. The trip took a little longer than usual, but we made it safely. We stopped at the grocery store for a few items and got home to find a bit of snow in the driveway. I parked on the street and got out the snow blower. After moving some of the white stuff, I put the truck in the driveway and unloaded our luggage. 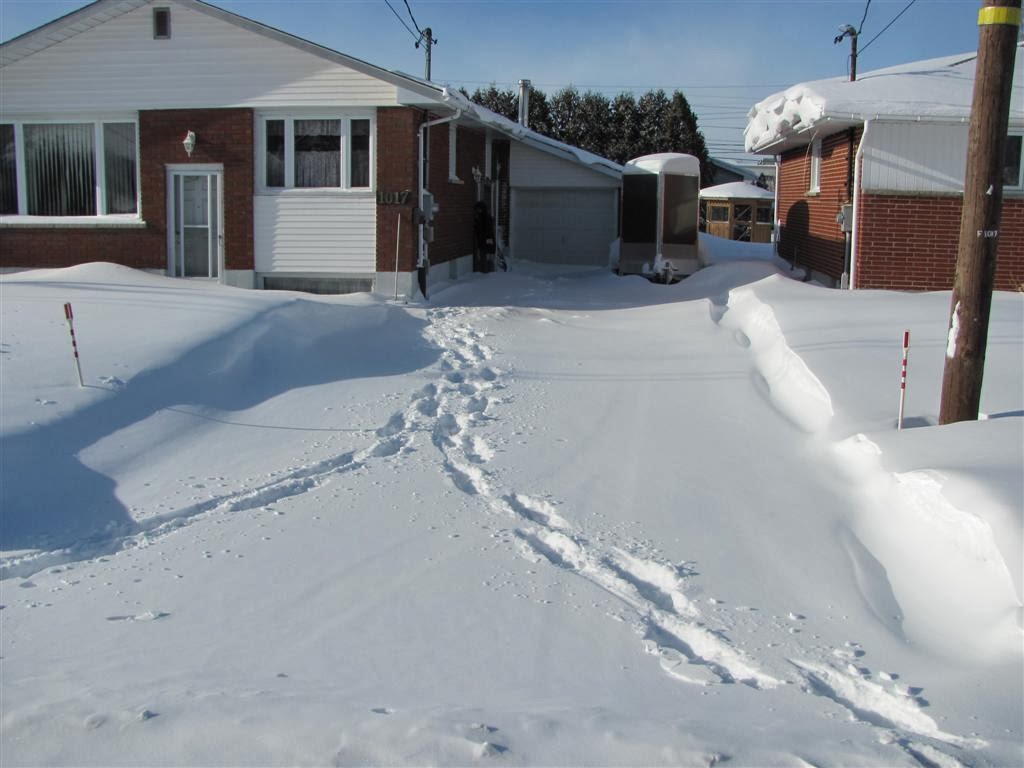 A little more snow while we were away

Apropos of nothing, here is a bit of trivia I learned. I found out some time ago that the lyrics from Amazing Grace and House Of The Rising Sun were interchangeable. What I learned recently from the Blue Collar Comedy Channel was that that great old Hymn can also be sung to the melody of Ghost Riders in the Sky. As if that wasn't enough, it also works to the tune of Gilligan's Island. I have no idea why anyone would want to know this, but I found it amusing.