The Freedom Riders Motorcycle Association of Northern Ontario, Inc. is our local riding club. It is a great group of more than seventy-five people. One of the club traditions is that we don't hold our Christmas party until mid-January. After the rush leading up to the holiday, it is much more relaxed later on. People's schedules are less congested, venues are easier to find and potential gifts are usually on sale.

This year, we rented the small hall at a local playground/outdoor rink maintained by the Lions Club. It was just big enough for the 44 people who attended. 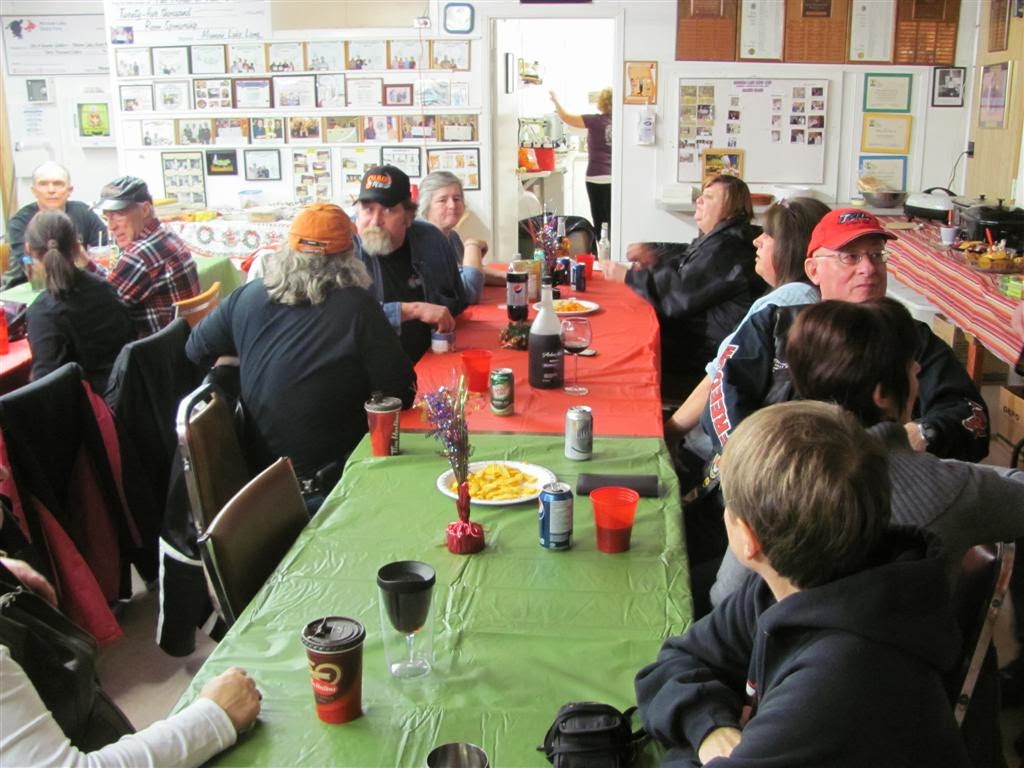 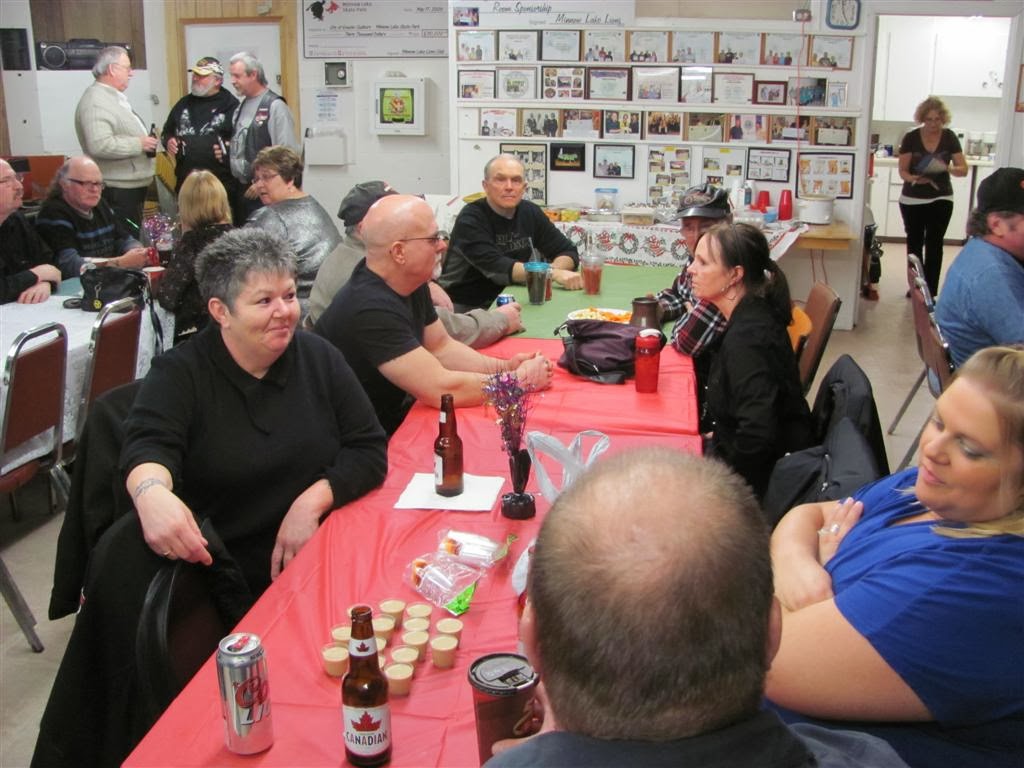 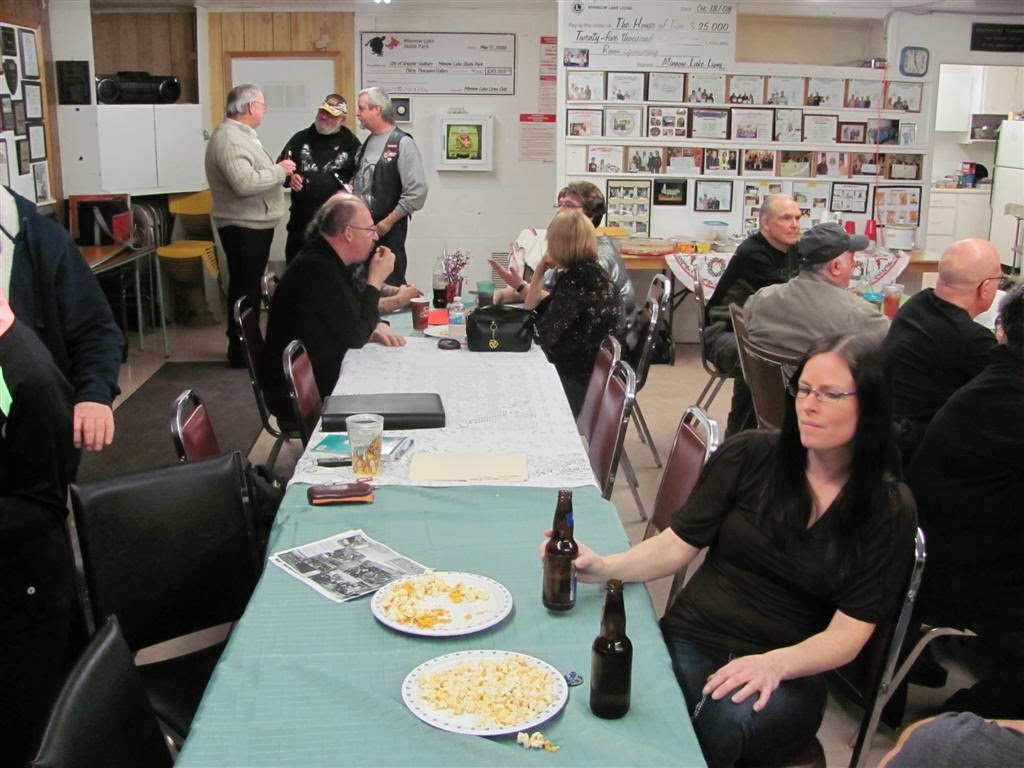 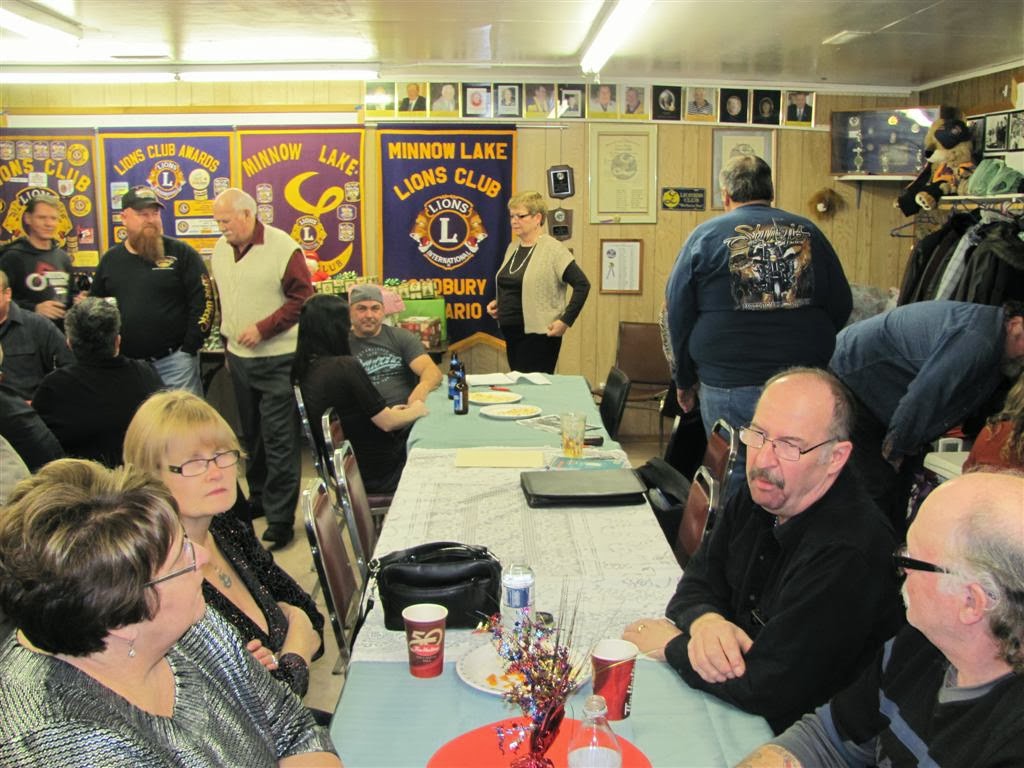 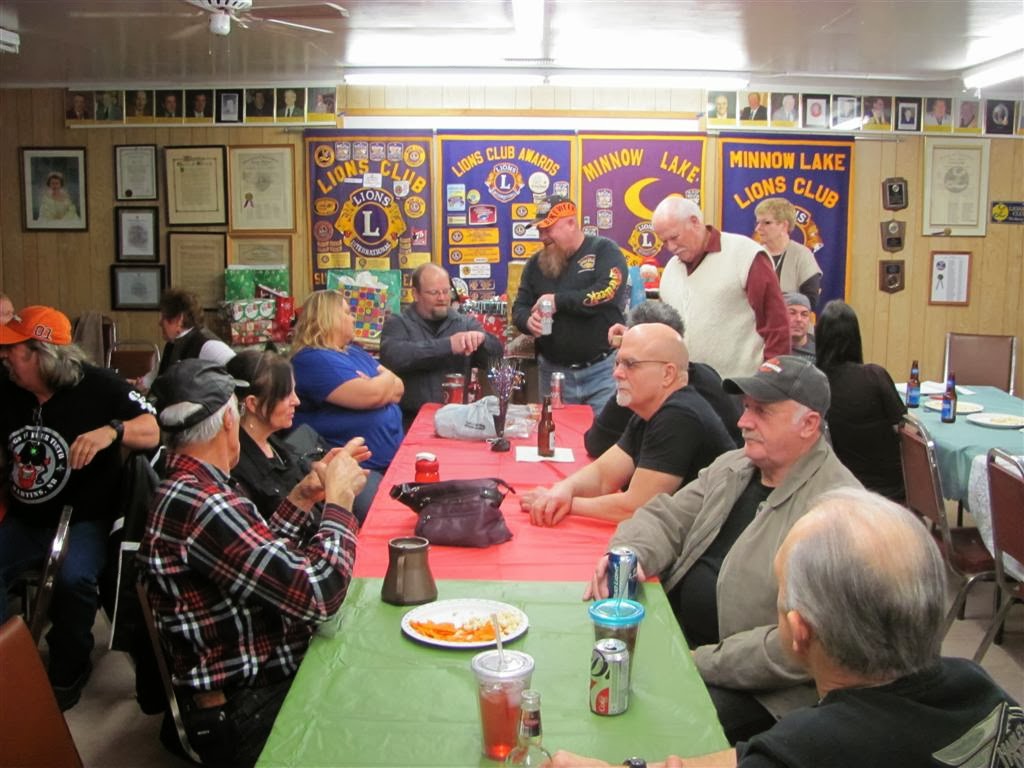 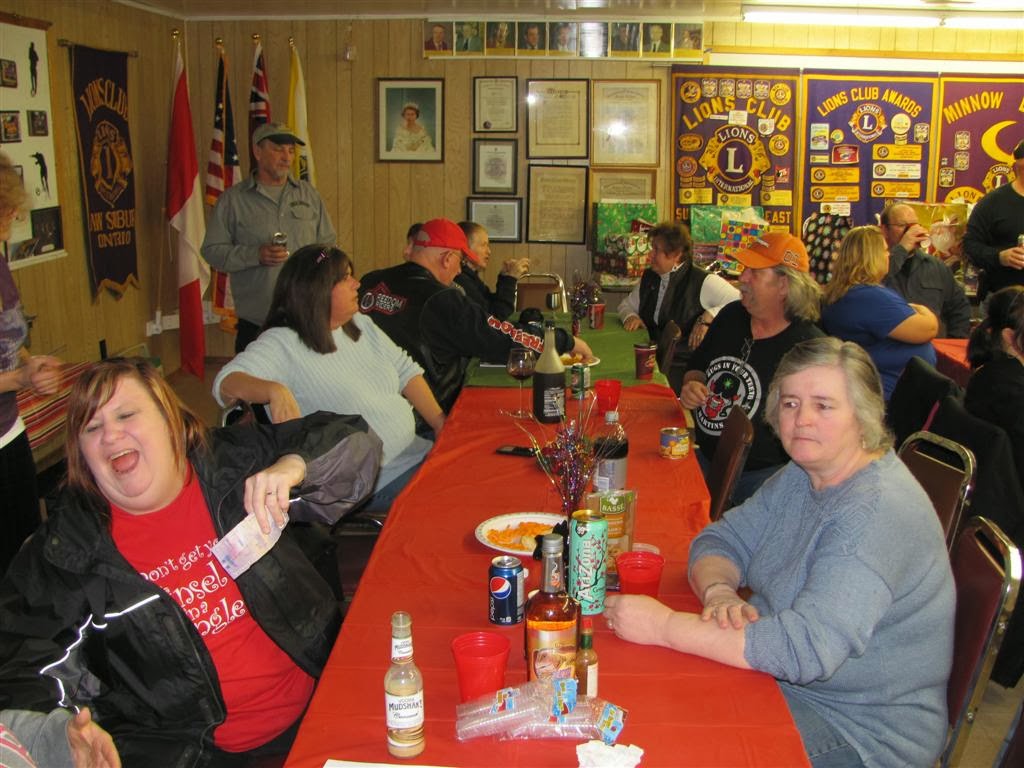 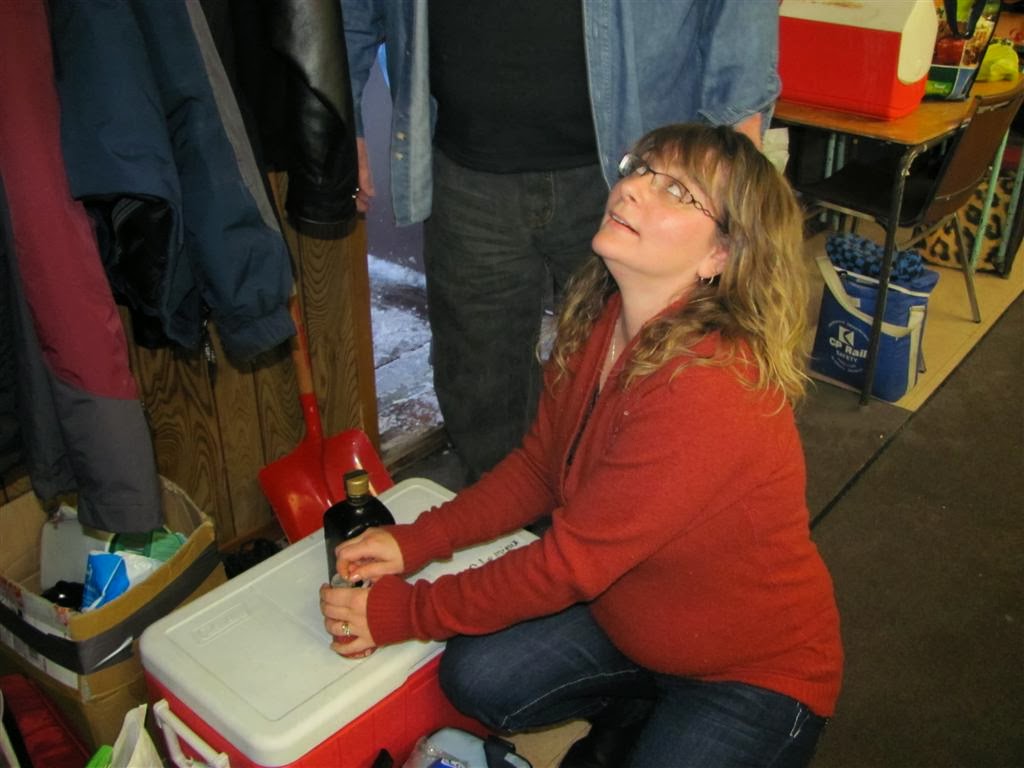 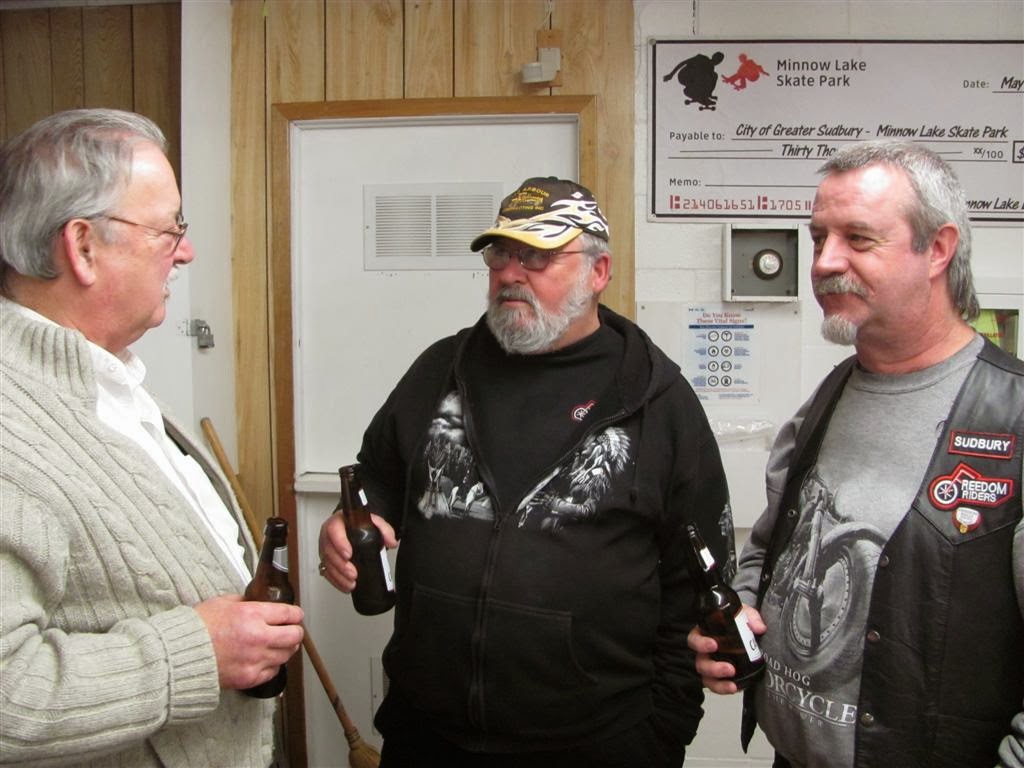 Before the party, the Club held its January meeting. After the business was done, Shawn got up and explained that Sue had not received her Firefughter calendar for 2014. To make up for this, he presented her with a calendar that he had produced, highlighting the Men of the Freedom Riders in all their glory. I must point out that glory can be a relative term. 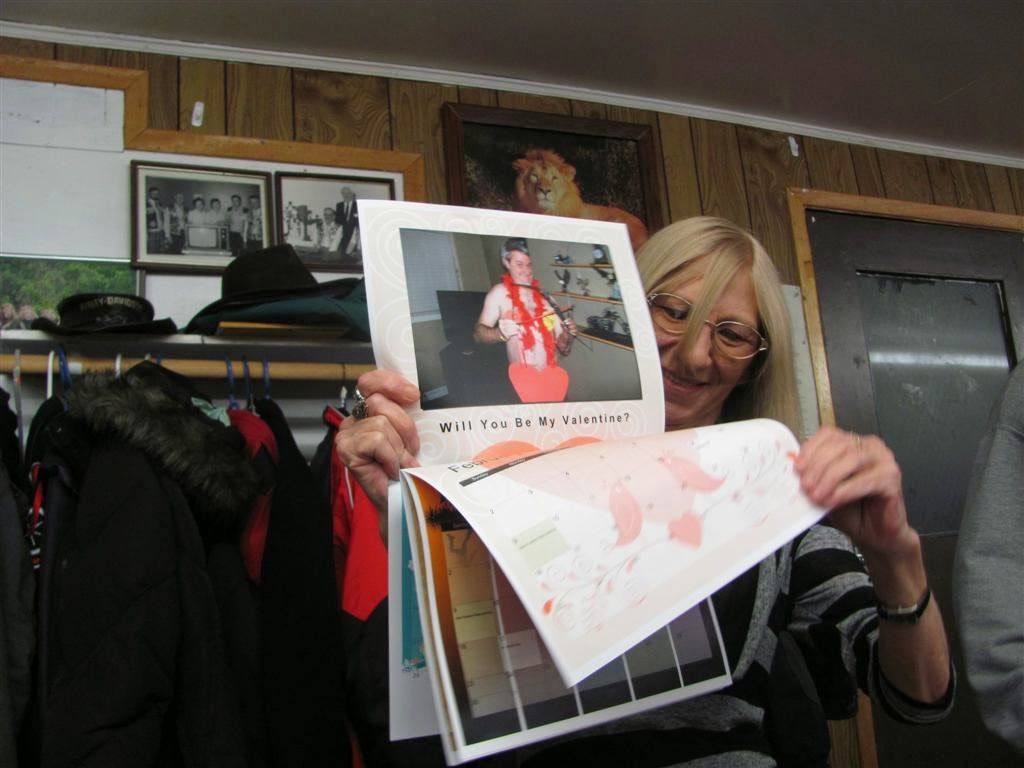 Sue and "the boys"

Following that, it was time to recognize Shawn's birthday. We had a special guest in attendance to honour him. 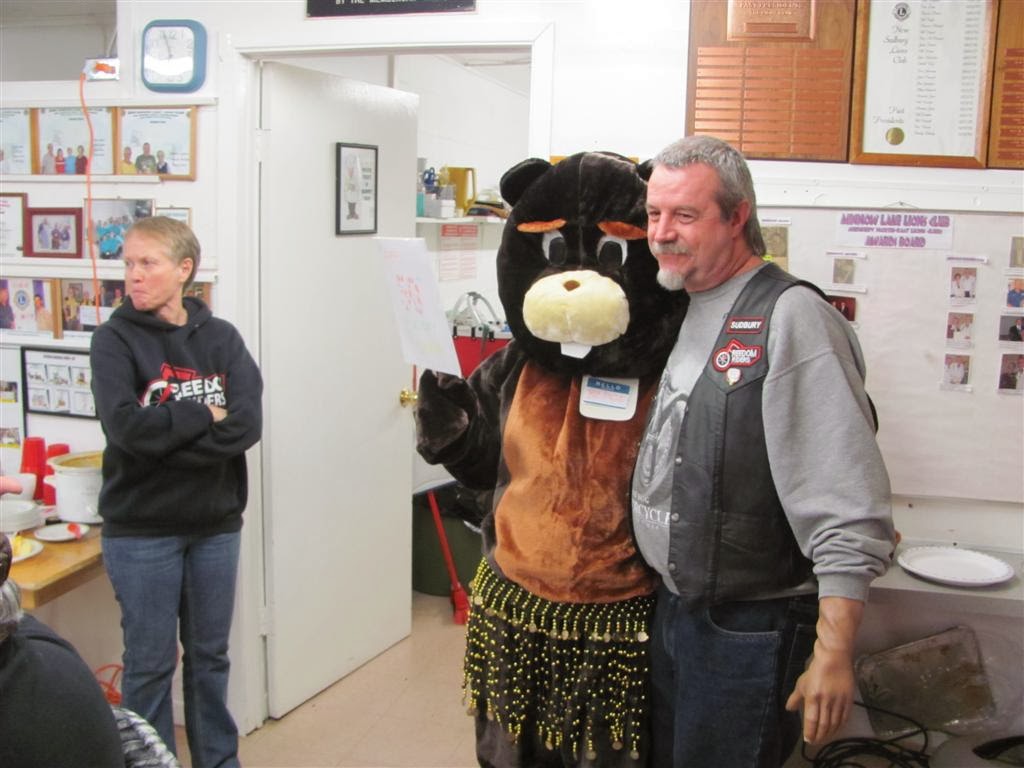 Shawn and his "beaver buddy"

The next order of business was food. Our event coordinator, Danielle, had done a great job getting the various pot luck offerings organized as well as cooking a turkey. The meal was excellent although I found that taking a little bit of everything added up to a whole lot. 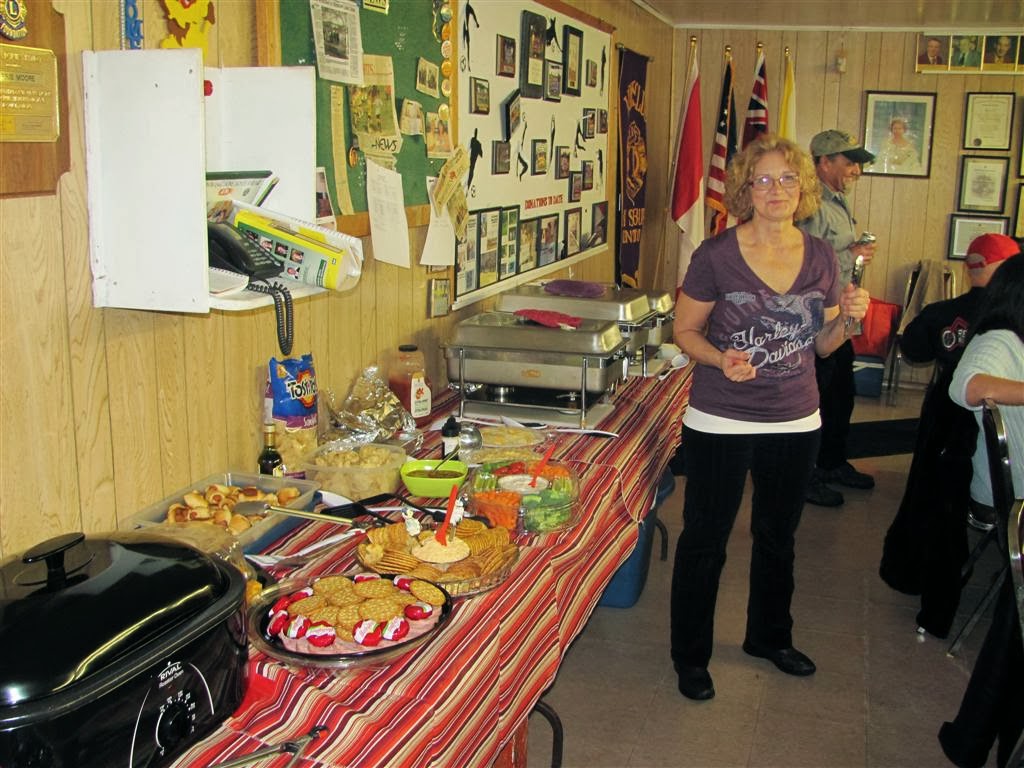 Danielle, mastermind of the Kris Kringle 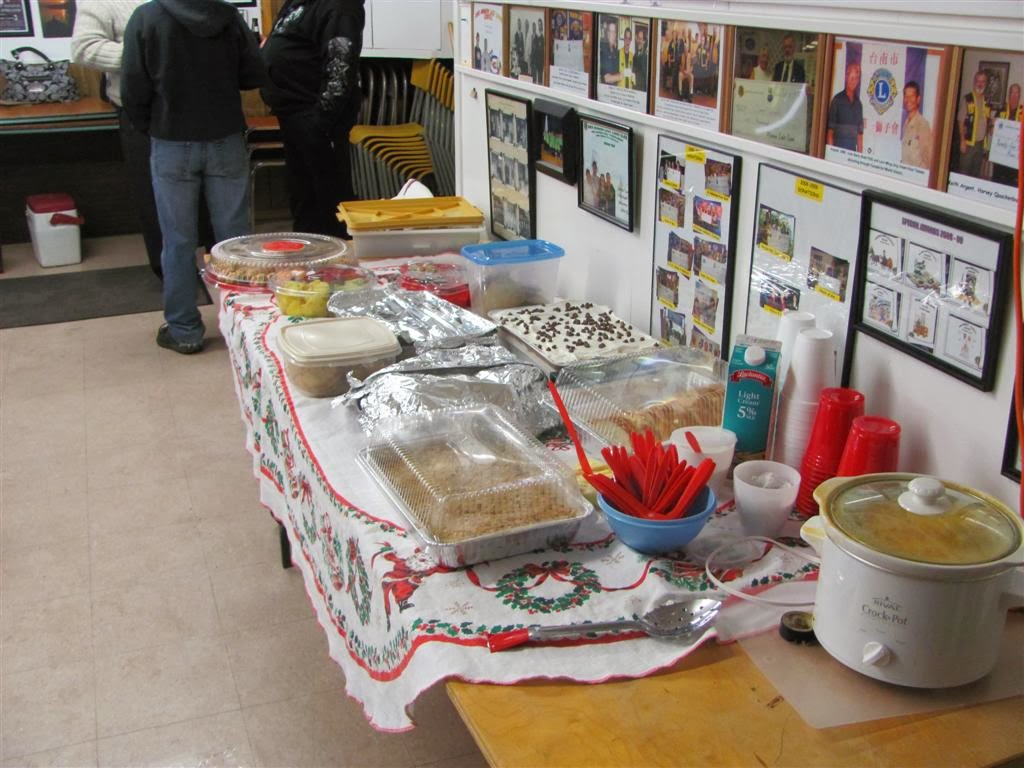 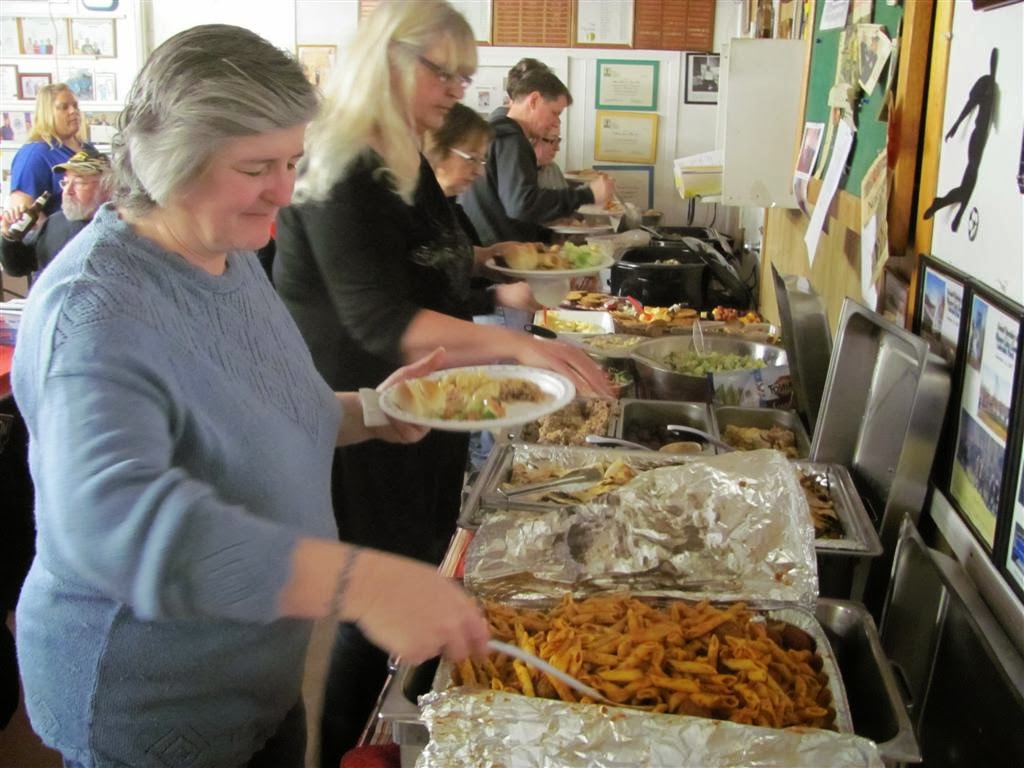 After dinner, we got down to the gift exchange. Each person brought a gift valued at up to $20, marked as to whether it was for a guy, a girl or either, and put it on the table. Names were placed in a barrel and the Kringlemaster (VP Ken instead of  me for a change) oversaw the proceedings.

Normally, there end up being a couple of popular gifts that keep getting stolen back and forth. This time, there were more than usual and each round became extended as the same gifts kept getting passed back and forth. It was several hours before we got down to the last name in the barrel. 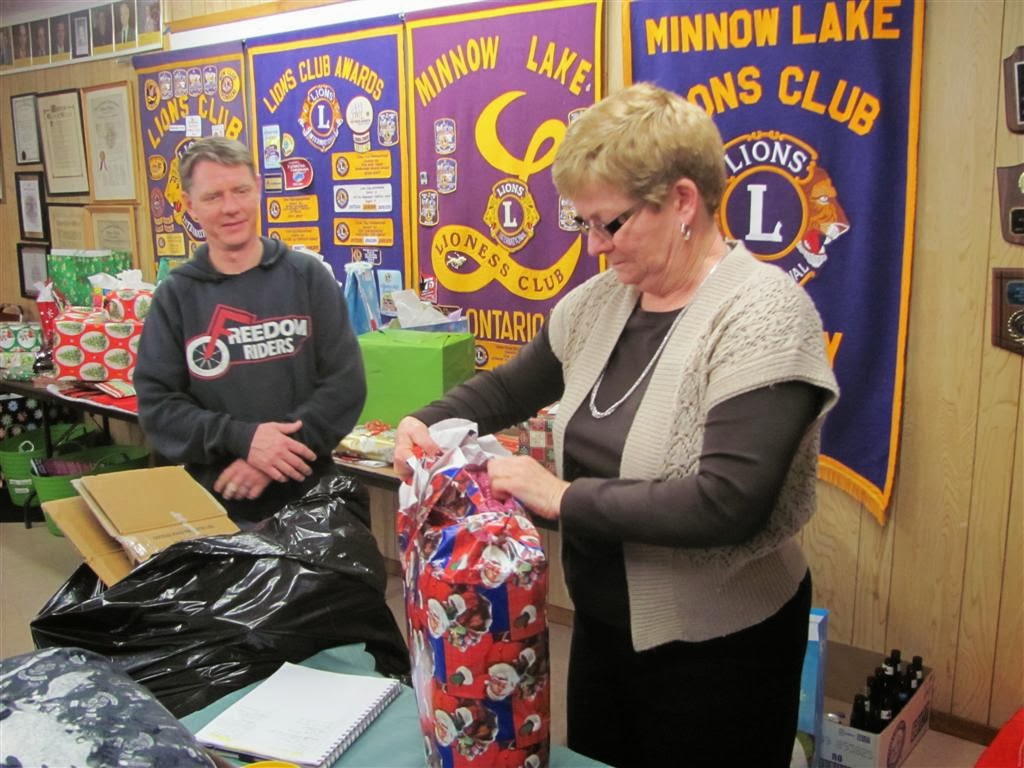 Bev opens the first gift as Ken looks on 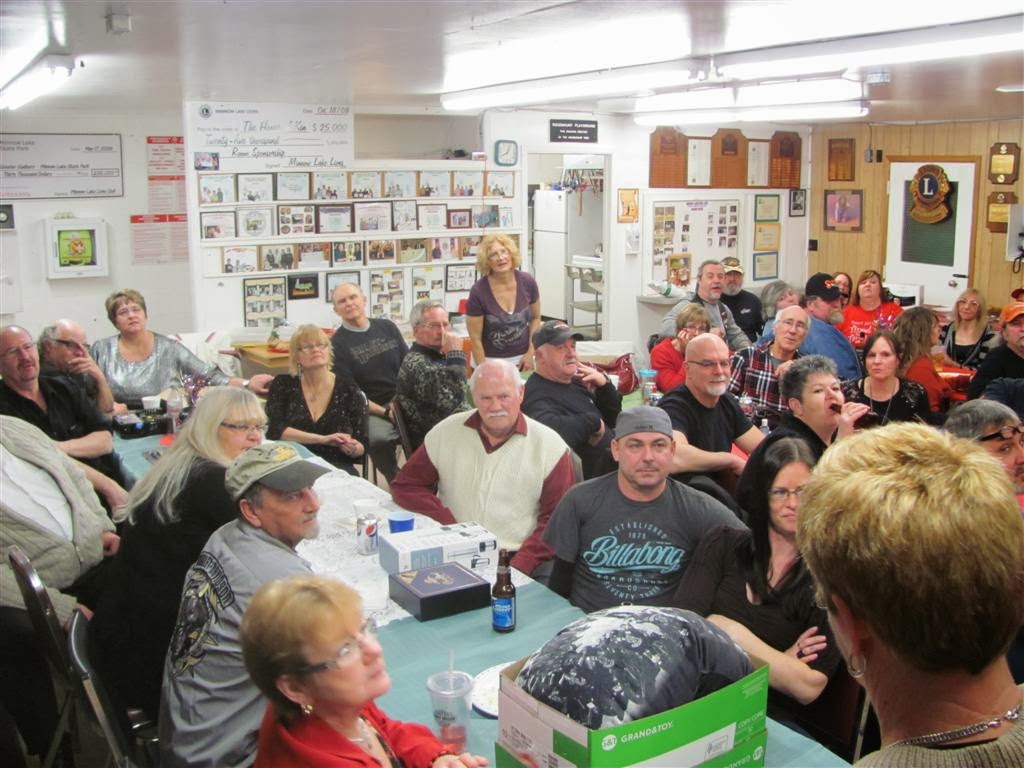 Everyone is paying close attention 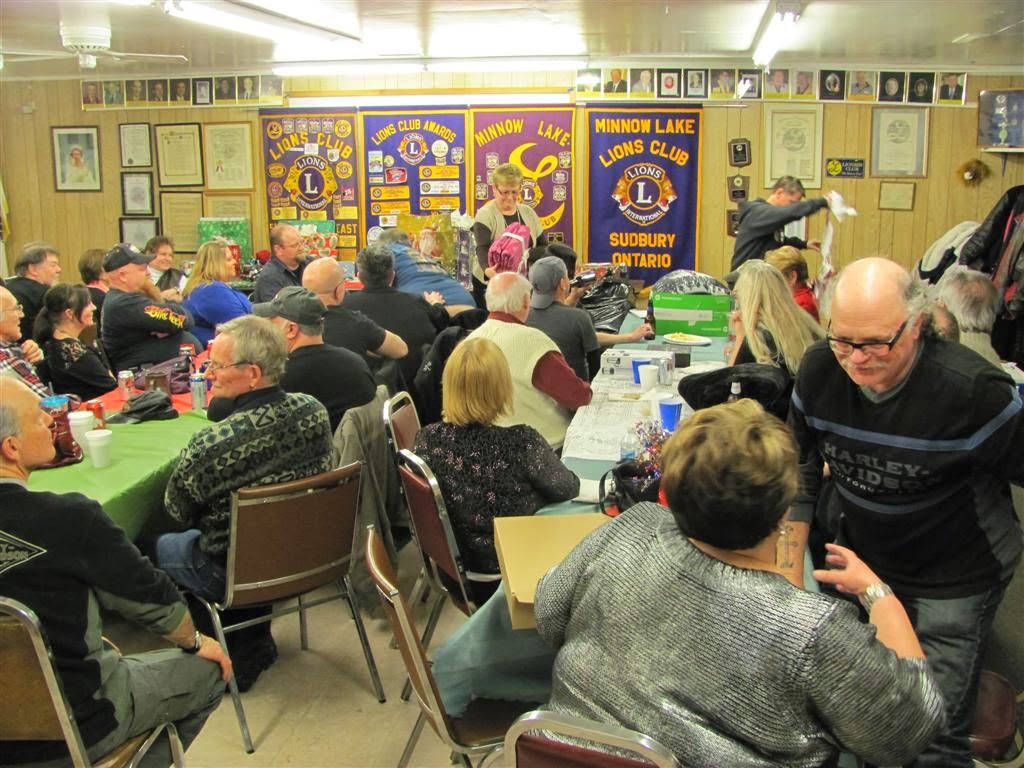 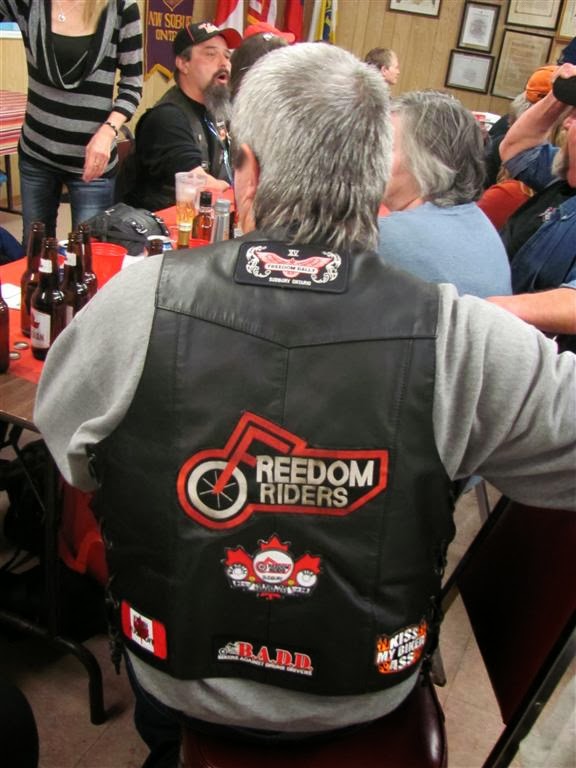 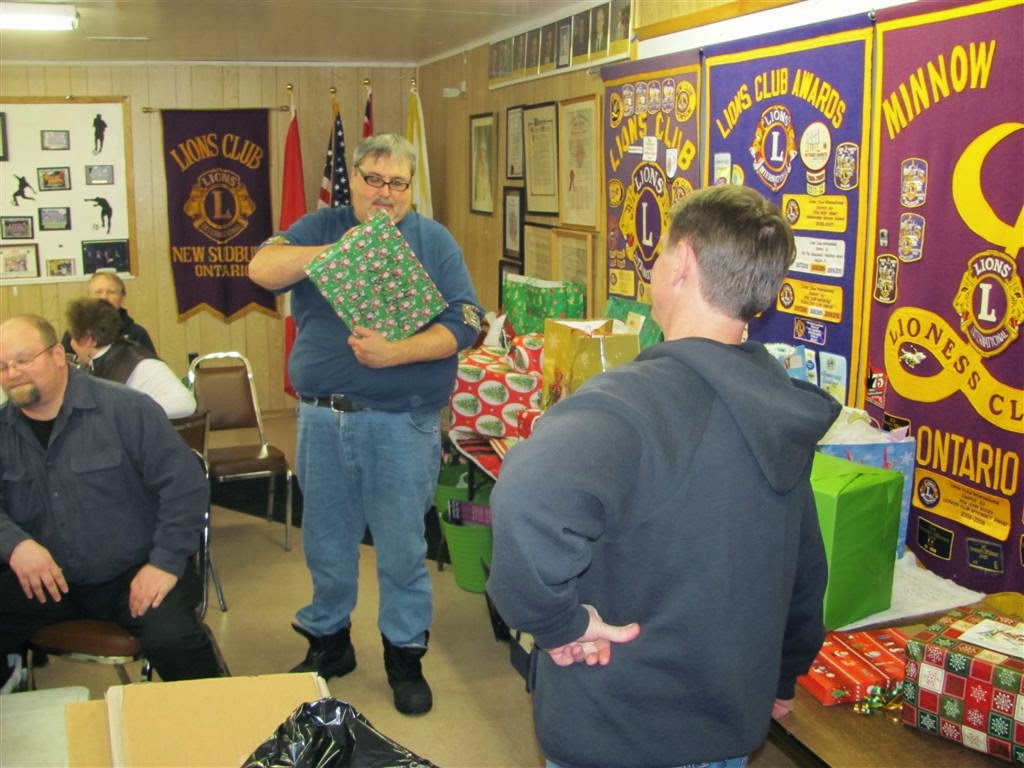 Bill goes to the table 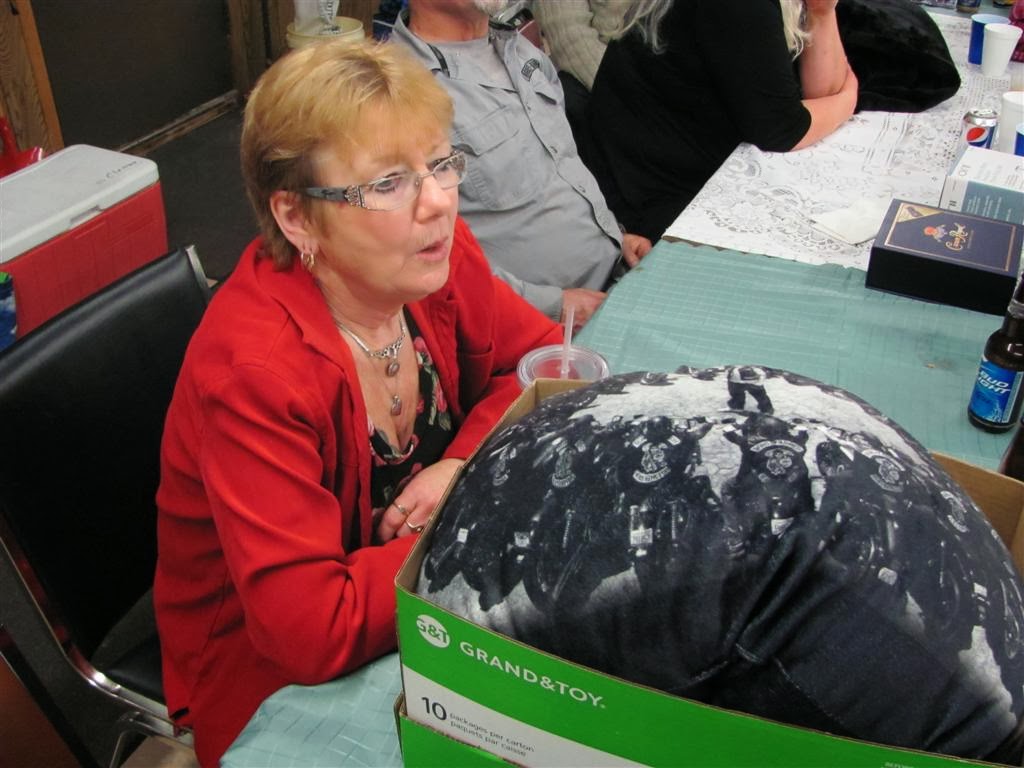 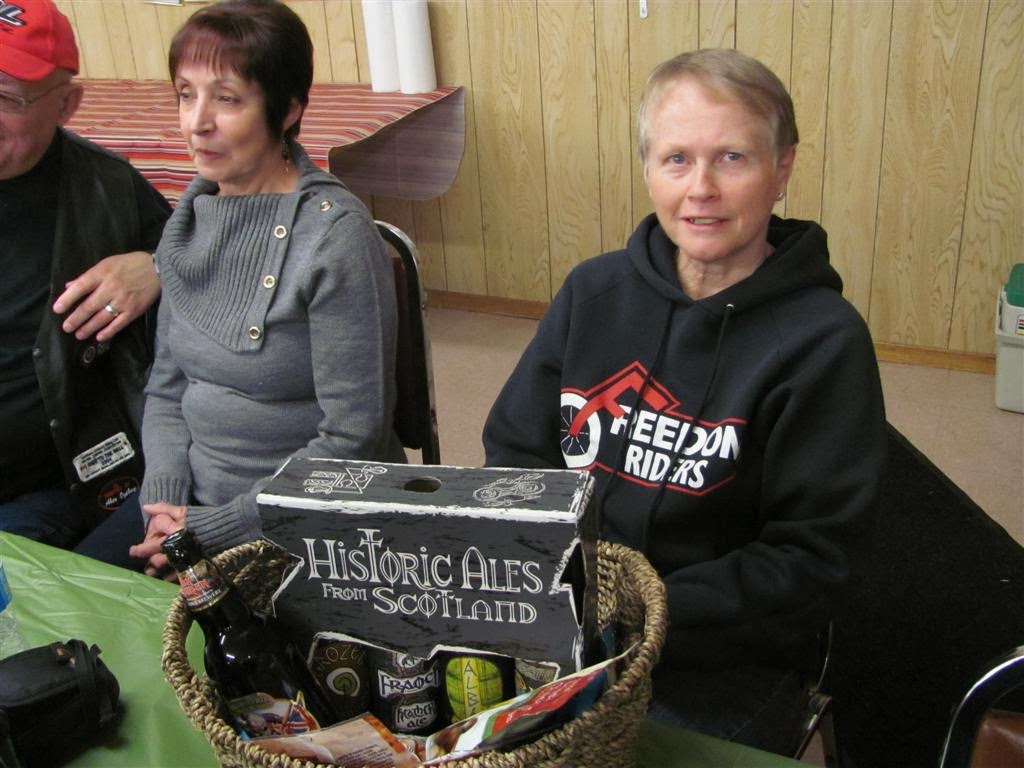 Sandy and a gift she held temporarily 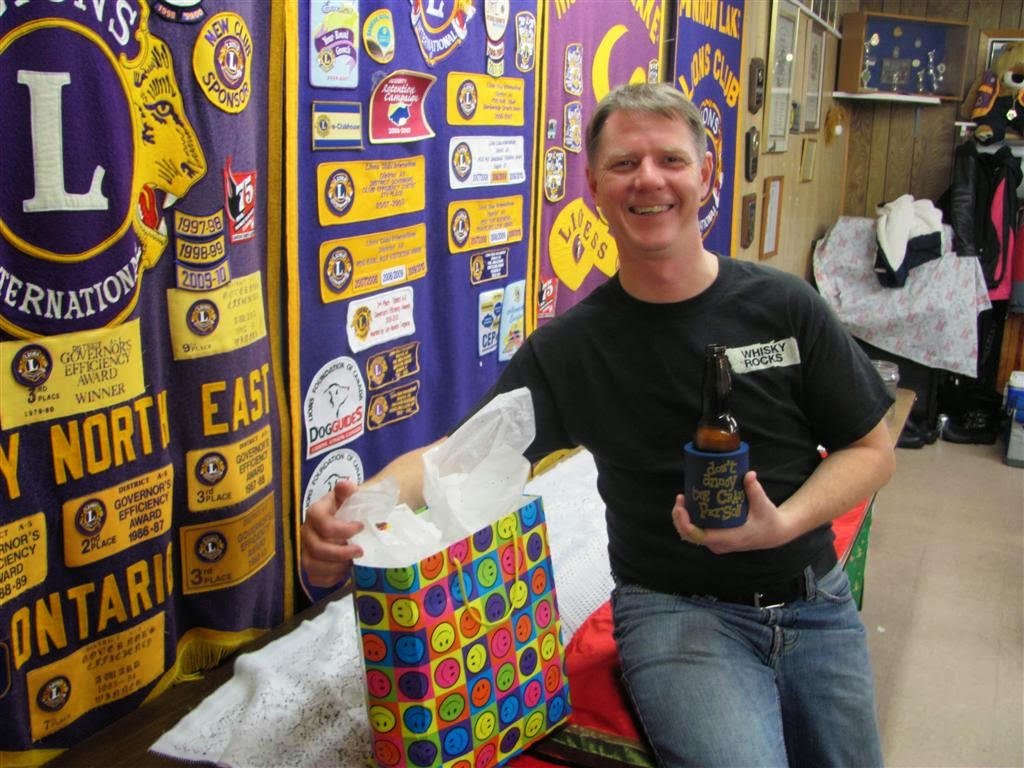 Finally, the last gift on the table 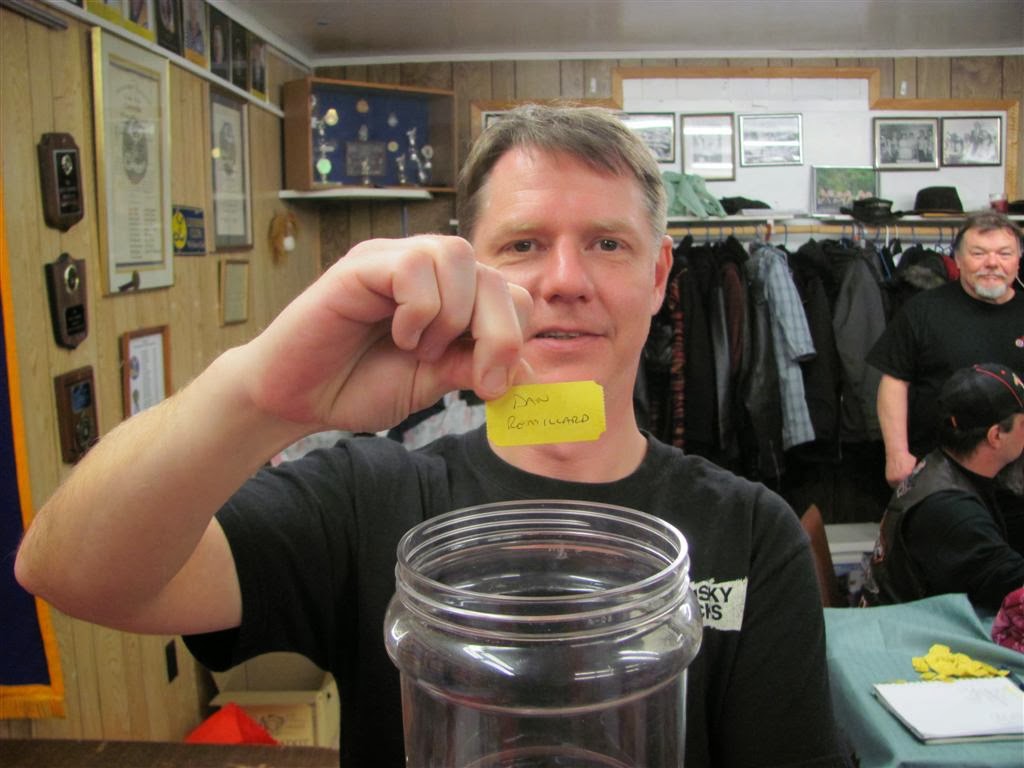 Dan was the last name to be pulled

When it was all over, Dan had won the coveted last position and the gifts made their final rotation around the assembled multitudes. Sandy ended up with a selection of candles while I managed to keep the popular wolf blanket. Due to the length of the process, there was some talk about amending the rules for next year, but there was no clear idea how to do this.

The last formal activity of the evening was the annual Attendance Draw. Each member gets one ticket in the draw for every official club activity they attend. The winner gets a $275 gift certificate from Leatherworks Plus, a $25 gas card donated by President Rob and a refund of their current year dues. The second place prize was another $25 gas card from Rob. The big winner was Chantal, better half of the same Rob.

Organized activities done, the members socialized and, bit by bit, started to leave. Some had booked rooms at a nearby motel to save the problems of having to get home after partying. This was another great gathering that helped build and maintain club spirit and we look forward to doing it again next year.
Posted by Jim "Skid" Robinson on 1/18/2014