The Freedom Rally, organized by the Freedom Riders Motorcycle Association of Northern Ontario, Inc., is over for another year. 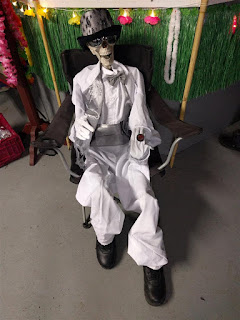 Steve waiting for registration to open

Sandy once swore she would never camp on the ground again. There are times, though, when camping is the optimum solution and the Freedom Rally is one of those occasions. So is the VROC Interlochen gathering next week. We now have camp cots and Sandy made memory foam mattresses for them. They were used when we had the large cargo trailer. We also have a 9 x 9 Coleman dome tent, but the cots won't fit in it. I searched a found a tent on special at Canadian Tire. It has a 9 x 20 footprint, plenty large enough for two cots, two chairs and a table.

The rally, held at the Mine Mill Campground on Richard Lake south of Sudbury, officially starts at noon on Friday but club members showed up Thursday evening to set up. This included decorating the hall, preparing the registration packages and ensuring everything is in place. A few rally guests also showed up early. How smooth everything goes depends on how well the committee, who had been meeting for six months, planned things out. After twenty-two prior rallies, the old timers have a lot of experience doing this but the preparation is still a lot of work.

Friday morning, Sandy and I took the new tent down and set it up. It was a bit more work than a simple dome, but not that much more. The heat and humidity made the job a little oppressive.

My main job during the rally is Treasurer. Between registration, concession sales, merchandise and a variety of fundraising activities, a lot of cash changes hands and someone needs to keep track of it. This year, I was also the Assistant Rally Director. These roles kept me hopping all weekend. A few people, like Rally Director Ken, his significant other Carole (Smurfette) and some committee members also worked the whole time. Most other members signed up for a fixed number of shifts. Sandy did all her work in registration the first day. Friday night, honorary members Spyder's Web entertained in the hall, free hot dogs were served on the deck and the bonfire went on for quite a while.

Each morning started out with a complimentary continental breakfast. Somehow, that included a lot of really good bacon this year. Well done.

Saturday, three escorted group rides set out for the day. That night, there was more music courtesy of Spyder's Web, more hot dogs and another fire. One of the high points of the weekend was a wedding. Rally Director and Freedom Riders VP Ken and Freedom Riders Merchandise Director Carole (Smurfette) got hitched on Saturday evening. The processional was a chorus of revving motorcycles. After the ceremony, there was a parade around the campground led by the blushing bride on her Spyder with the groom riding bitch. It was a pleasure to witness the nuptials of such a nice couple.

Sunday, Pastor Jack conducted a worship service in the morning and motorcycle games in the field occupied the afternoon. The evening banquet was catered by Classic Catering, who have been feeding the Freedom Rally in fine style for many years. This year, they served 148 people, up from our usual 130. After the meal, various awards were announced and prizes were determined. Then there was a final bonfire.

It was dry Sunday night so Sandy and I took down our tent to avoid the morning dew. Mosquitoes came out in droves at 9:00 PM (none before that) making us rush the last bit. We took everything home and spent the night there.

Monday morning, everyone had breakfast and we said goodbyes to our guests. All the gear was loaded in trailers and trucks and a convoy of vehicles wound its way to the club sheds in Hanmer where everything was packed away for another year.

If we made any money this year, and I am sure we did well, the club members will allocate most of it to a donation fund we keep to support local children's charitable causes, as required by our bylaws. There used to be a circuit of club rallies around the province but this is about the last one. Club members are determined to keep it going and are planning for a major celebration at the 25th in 2018.
Posted by Jim "Skid" Robinson on 8/01/2016