Today was going to be the opposite of yesterday. Small park, little walking and less crowds.  Storybook Gardens has been located in London's Springbank Park since 1958 and is aimed at smaller children. Mike and Tom decided not to join us today.

Sandy and I had breakfast at the hotel and were at Heather's before 8:00 AM. Kim arrived before 10:00 AM in their van with Jolene and Robyn. Sandy climbed in with them while I rode shotgun with Heather, Jasper and Jolene in the Gronek Caravan. Kim led us west on 401, disregarding instructions from my GPS to take several exits. She went across, the 401, took the 402 and exited at Colonel Talbot Drive. She was right and we avoided most of the London city traffic. The parking lot at Storybook Gardens was already mostly full. 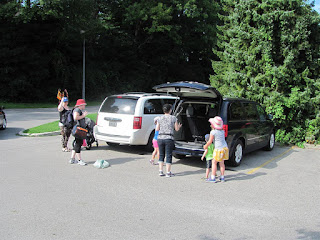 We bought admissions and a bag of tickets that could be used on the rides. As you would imagine from the name, there are many displays and decorations based on the theme of children's stories. 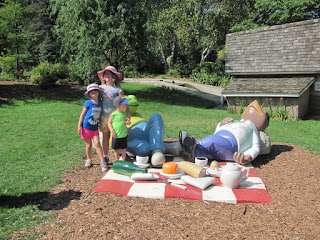 The first stop was the splash pad. There were a lot of different ways to get splashed and the kids loved it. 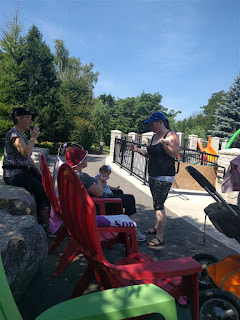 The adults get settled in the shade 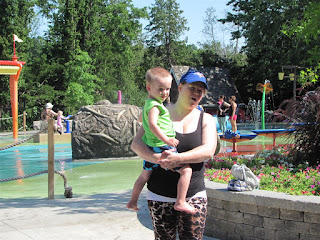 Jasper off to get suited up 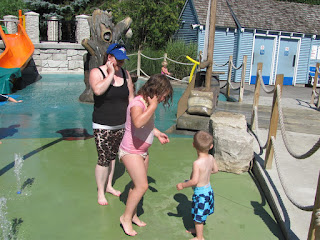 Jolene is encouraging her cousin 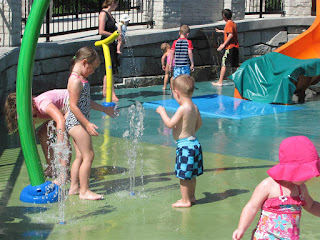 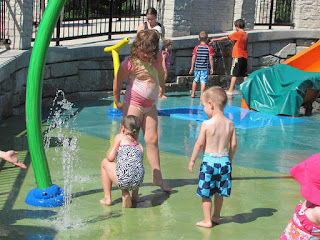 All three are involved

After drying off, we continued on to a section that had things to bounce on, things to climb on and things to slide on. The kids had a ball and probably could have stayed here all day, but the parents decided we had to move on to the rides.

Heather took Jasper on the Ferris wheel, while Kim took Robyn. Jolene wanted to ride by herself. We worried about how Jasper would take it but he did just fine. Then Jolene, Robyn and Jasper rode the elephant ride (like flying Dumbos without the flying) together. Next, we went just outside the gate and the kids rode the vintage carousel. Twice. 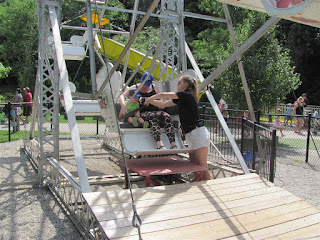 Heather and Jasper on the Ferris wheel 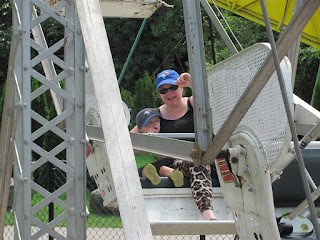 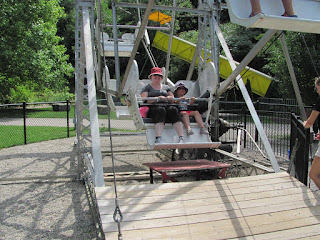 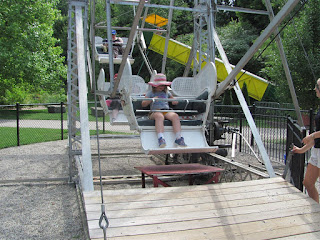 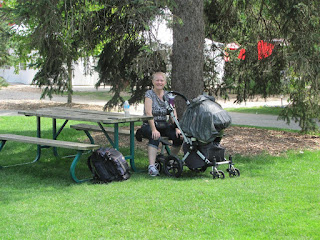 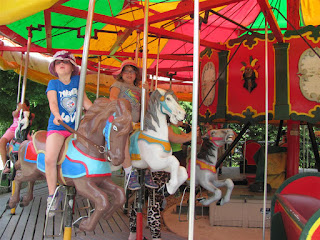 My thoughts on Storybook Gardens were that it is a fine place for pre-teen children. Ours had a blast. The season passes are very reasonable and I could see taking kids here regularly if we lived in the area.

We wrapped the Storybook visit and drove to a nearby Shoeless Joe's restaurant for lunch. It was largely empty and the server took very good care of us. Sandy, who still wasn't feeling 100%, split a very generous club sandwich with me. The grandkids had a variety of things of the little person's menu. They were extremely well behaved during the meal. 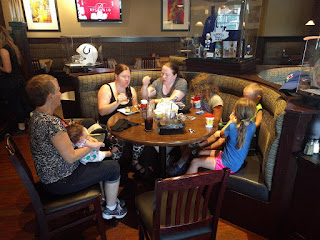 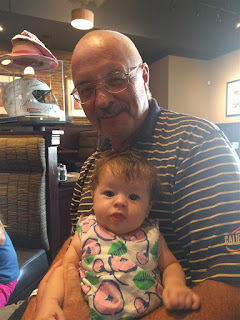 Kim and Sandy started directly back after lunch, while Heather and I went to Costco so she could pick up diapers. Then I made a mistake by following the GPS and directing her right through downtown London during evening rush hour. We should have backtracked to Wonderland and then taken the 402/401. I really do like London, though. Of all Ontario cities, I think it is probably the nicest one to live in.

Kim had dropped Sandy at the hotel since Tom was out dealing with a car repair. Unknown to them, he had left the front door unlocked for her. She still wasn't feeling well, so her supper was a toasted Tim Horton's bagel while I had a club sub from Subway.

Evenings are quiet because we are keeping busy all day. I read more of Browder's book on the Kindle and was asleep early. 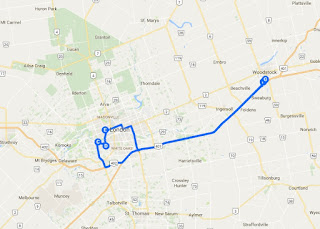