It always rains on Interlochen. This morning we got a brief bit of very light rain before the clouds scattered and the blue skies returned. The Big Grouch let me drive his car to Dilbert's Restaurant, just down the road. It steps out quite nicely, at least as well as the Equinox. I tried to be responsible by having two eggs, ham and rye toast. I should have skipped the hash browns.

Back at the campground, various small groups headed out for rides, some featuring micro-breweries, but we just sat around (in the shade) and visited. 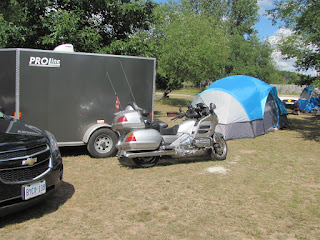 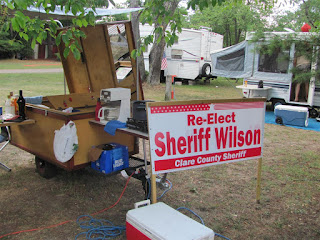 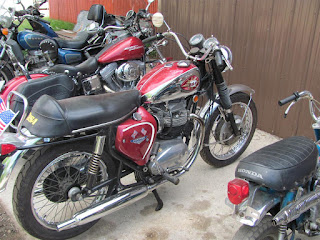 The Big Grouch (Roger) usually rides his motorcycle, but his Vulcan Classic is currently suffering from an oil leak. Rather than miss the camaraderie, he came up in his car. We've done some VROC gatherings with no bike in past years, due to either medical or mechanical reasons. This year, we've done two in the car for pretty much no reason at all. We gather for the people more than the riding.

As lunch time rolled around, we decided that it was time for our annual trek to The Cherry Hut in Beulah. The three of us piled into the Equinox and zipped west on US 31 to where it turned south. The parking lot at the restaurant was crowded but we managed to squeeze into a spot. There was a short wait for a table, but these folks are pros at getting people seated. Sandy and I shared a cherry chicken salad sandwich on a croissant with potato chips and then each had our own cherry pie a la mode. I think Roger had a Reuben sandwich and pie. 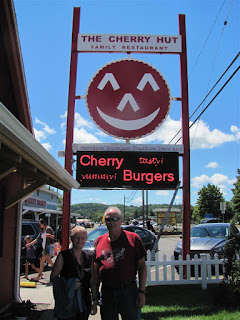 One of our traditional stops 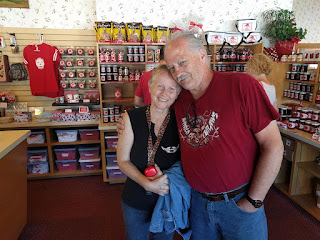 Waiting for a table

After lunch, we took a detour and drove around Silver Lake on the way back to the campground. There was some road construction on the way to Frankfort but the rest of the drive was nice. 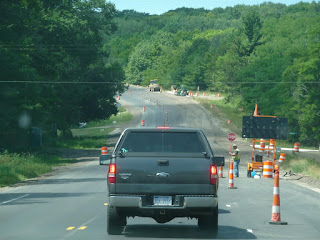 Road construction on the way to Frankfort 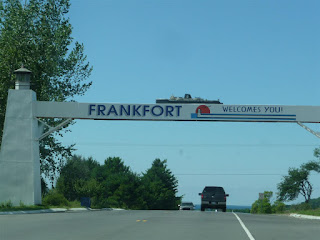 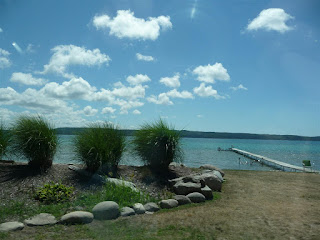 Back at the campground, we weren't too energetic. The three reserved sites next to us started to fill up with folks from the Outlaws MC and what appeared to be an associate club, The Pariahs. They had large recreational vehicles and brought ladies, kids and dogs, so it was obviously a family weekend. We had no concerns.

The traditional Cycle-Moore soft serve ice cream machine fired up during the afternoon, which gave everyone something cold to combat the heat with. Many of the crew were going to cook supper on site, so we took Roger back to Culver's (on 31 towards Traverse City). I finally got my mushroom/Swiss Butterburger while Sandy just had a caramel cashew sundae. Roger had something with fish and chips.

Back at the campground, the party was getting into full swing. The cornhole boards were being put to good use, the alcohol was flowing liberally and tall tales were being told. Someone even through some pieces of magnesium into the fire. It took a while, but they eventually lit up the night. Sandy and I turned in early, as usual, but we dozed off to the sounds of happy people. I think VROC out-partied the new neighbors when all was said and done. 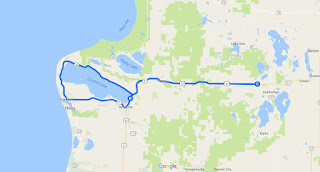