Sandy and I got a late start this morning so it ended up being just the two of us who arrived at a much busier Dilbert's. We stood and waited for a table, watching one single local take up a table for six and one couple take up another. It was our turn when one of the big tables came open, so we asked the couple in line behind us if they wanted to join us. They said sure. They were young local folks getting together for a camping weekend.

Since we had brought the motorcycle, a ride seemed in order. Flattop was going to lead another micro-brewery tour, but we weren't interested. Furhead said he'd go where we did. Before we left, Roger said he was going to pull up stakes so we said our goodbyes.

The two bikes were it for our group. I started with the delightful winding road around Long Lake and then we took Secor and Silver Lake Roads. Rather than go to the Traverse City waterfront, I took us right on Airport Road and then North on Garfield, which turned into Peninsula Drive. This was the very road we were looking for.

Old Mission Peninsula divides Grand Traverse Bay into its East and West Arms. It is an American Viticultural Area (AVA), defined by the US government as a wine grape growing area, and had a number of cherry orchards as well. As we rode out to the tip on Michigan 37 (aka Center Road), we saw wineries dotting the landscape. Apparently, there are ten withing a five mile radius and some of them looked like they had taken their styling tips from the Napa Valley in California. The peninsula is a pleasant place in the summer but I would imagine it is harsher come winter. 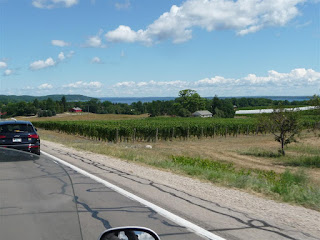 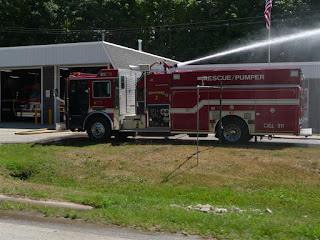 I think they were practicing 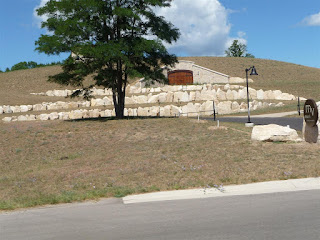 One of the many wineries 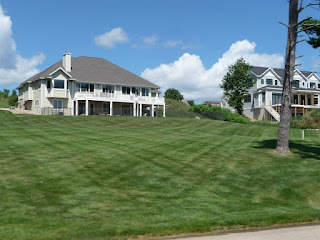 At the very tip of the peninsula lies the Mission Point Lighthouse. The point is a few hundred yards south of the 45th Parallel, half way between the Equator and the North Pole. The township maintains a nice park on the site. We parked and walked down to the white sand beach. 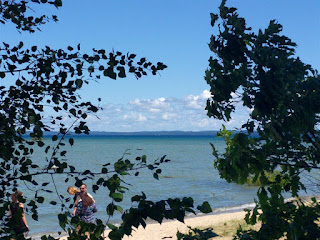 Looking out on Grand Traverse Bay 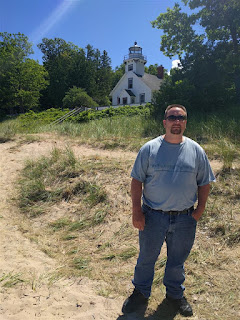 Furhead and the Old Mission Light


Heading back south, I diverted west to Peninsula Road,which paralleled M 37. About two-thirds of the way back to the mainland, we arrived at the Jolly Pumpkin, a restaurant, brewery and distillery. Big Dawg led us to try this place last year and we enjoyed the artisan fare. We pulled in to find a familiar Nomad there and realized Roseman and Lana had the same idea.

Rosie and Lana were nearly finished and stopped to say Hi on their way out. I had a hamburger while Sandy had smoked turkey breast and  Swiss cheese on a multi-grain bun. I don't recall what Furhead ordered but we all passed on the beer sampling. 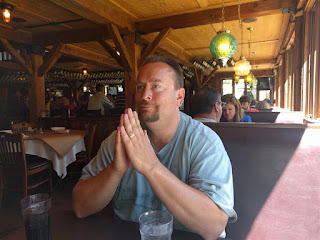 We continued down Peninsula Drive back to Traverse City. The houses along the shore line here would be amazing places to live. One enjoyable factor was the cooler temperatures today. We made our way through the city and back to Interlochen, arriving at the campground about 3:00 PM.

Since we decided we didn't need supper after the ample lunch, I hooked the trailer up and loaded the bike. I wanted to appear that I knew what I was doing with all the folks watching. That should have been no big deal since I do this several times each year. But I'm sure the audience was why I forgot to fold the antennae down before riding into the trailer, with the resulting clatter of metal on aluminum and the subsequent wrangling to get them folded forward after they were bent backwards. Then I screwed up one of my tie-down straps, getting the strap wrapped around the ratchet. Luckily I had spares, because this one was not getting untangled anytime soon. When I got out, I could see the VROC crowd and the Outlaws looking on with amusement. It's a good thing that I'm old enough to have lost most of my pride a long time ago:-)

Other than Flattop getting bitten on the nose by a dog (about the size of a small chihuahua), the evening was uneventful and more subdued than last night. There were comments about how this was probably the driest Interlochen weekend we have ever seen. It was much quieter tonight when Sandy and I hit the sack. 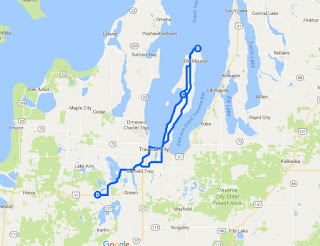