It was a clear morning when we stuck our heads out of the tent about 7:00 AM. There was very little dew and no wind, which made taking this 20 x 9 foot monstrosity down and folding it about as easy as it was ever going to be. Still, we couldn't fit the fly into the bag. I'll have to do this again and see where I can improve the process.

After everything was loaded and goodbyes were said, we were on the road about 8:20 driving east right into the sunrise. We took 31, Airport Road, 3 Mile and 31 again to the McDonald's just before the M72 intersection. It looked like someone didn't come to work this morning because there was just one lady in a manager's shirt working the counter and the lines were growing. We moved on without ordering. There was another Mickey's on US 131 north of Mancelona (although the GPS was certain it was SOUTH of Mancelona). After picking up breakfast and coffee to go, we kept rolling.

We retraced our route, cutting over from Alba to Gaylord and then north on I-75 to the Big Mac. Temperature was a moderate 73F as we rolled into the Upper Peninsula. We crossed the International Bridge back into Canada about 12:40. There were lots of US bound vehicles but almost no one going our way. The plaza construction on the Canadian side continued. The CBSA officer asked where we stayed, what was in the trailer and where the bike was registered and then released us. Total crossing time? Ten minutes! 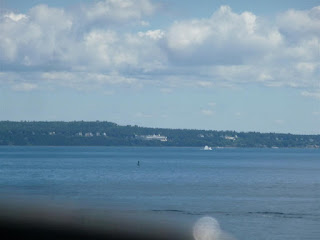 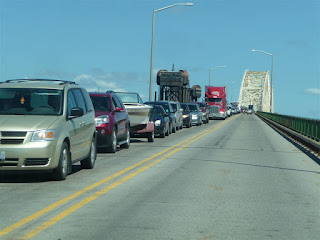 US bound traffic on International Bridge 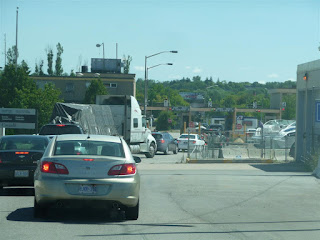 Travel along the North Shore was uneventful. There was one holdup along the Mississagi River as we found ourselves in a line following a Land Rover doing about 75 KPH in a 90 zone. Markings said it was Beata and Adam from Poland on some kind of UNESCO world tour. I found a link but, other than this one brief page, it was all in Polish. This page says it is some kind of competition but Google can't find any more references. I wish them luck and hope they don't get run over by a semi. 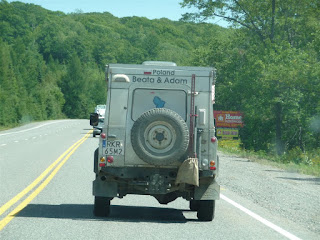 Beata and Adam trundling along

At the new Esso/Tim's in Blind River, we stopped and got an ice cap (cappuccino) and one of their new smoothies. There was almost no waiting at the Spanish River Bridge so the rest of our drive to Sudbury went quickly. 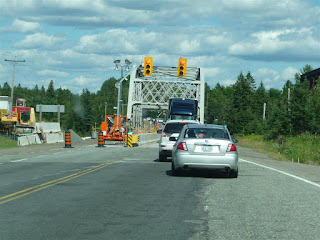 This is the whole line eastbound at the Spanish River 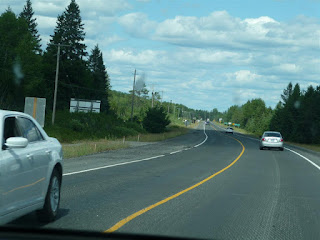 No one waiting westbound either

We pulled into our driveway at 4:40 PM. The bike and all our gear were unloaded and put away by 5:30. It was another good trip but, for all we rode it, we could have left the bike at home. We'll have a talk about this troubling trend soon. My concern isn't that we're not taking the bike. My concern is that it doesn't seem to be bothering me. And that bothers me. More later. 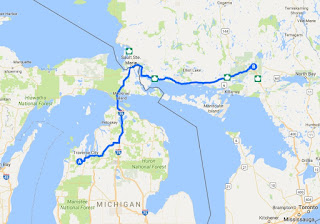