In 1819, a man named William Guest (born 1777 in Tipperary, Ireland; died 1869 in Ontario), his wife Elenor and their four children emigrated from Ireland to Quebec. One child died on the crossing. Their reason for leaving isn't mentioned, but William would have been coming of age when non-Anglican Irish people (including Catholics, Presbyterians and Methodists) had banded together to form the Society of United Irishmen. They rose up against British rule in the Rebellion of 1798 but were defeated, followed by an ongoing insurgency. What is known for sure is that his departure pre-dated the Irish Potato Famine by twenty years.

In 1824, William, his wife and three surviving children (Thomas Ardiel Guest, Elizabeth Guest and William Williams Guest) settled on the north half of Lot 2, Concession 4 in the Talbot Settlement in the former London Township. This was where Colonel Thomas Talbot, an Irish born soldier, had convinced Lieutenant Governor John Graves Simcoe to allow him to develop the land. Settlers on the 100 acre half lots were required to build a road along the front of their lot, construct a house and sow ten acres of land within 3 1/2 years to maintain their claim.

This was of interest to me because William's son, William Williams Guest, was my maternal grandmother's grandfather. The Guests have lived in the London area ever since, and the area where the original homestead was had been reported to be near Fanshawe Pioneer Village. Now we were off to visit the village today and see if there was any more information to be found.

Fanshawe Pioneer Village depicts life in this area from 1820 to 1920 and is operated by a non-profit organization supported by the City of London.

Sandy and I had breakfast and went over to Heather's. She had already taken Jasper to day care, where he was experiencing his last day in the Toddler Room. On Friday, he will graduate to the Preschool room. When we got to the house, Heather was trying to enroll Jasper in swimming lessons via Woodstock's online website. It wasn't going well. Prior to leaving, we moved the base for Fiona's car seat from the van to the Equinox. I can't believe how easy these things are to do these days, with the required anchor points installed in the vehicles at the factory.

Driving west on the 401 and exiting on Veteran's Way, we found the village on a quiet piece of land adjacent to Fanshawe Lake. There were quite a few buildings that had been brought in from around the area and were arranged to give the feeling of several differing eras. You knew it was a Protestant Irish settlement by the Orange Hall. My maternal grandfather, James Thomas Woodend, emigrated to Canada 100 years after William Guest and was a loyal Orangeman until his dying day.

One of the highlights was an older gentleman in the print shop. He regaled us with tales of what it would have been like to be a settler here, living without ready access to stores and amenities common in the towns. He also explained the hardships the people would face just getting to the towns. It was a fascinating experience and I am sorry that I did not get his name.

We had lunch at the cafe, located in an old machine shop (complete with pulleys in the ceiling for the leather belts that ran the machines), before we left. The prices were quite reasonable. 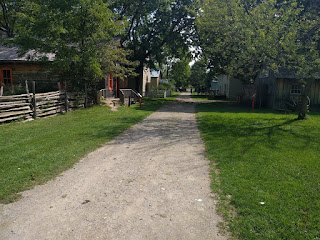 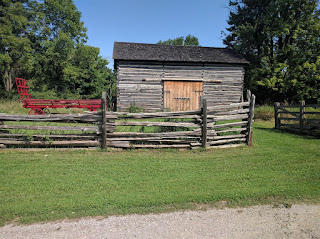 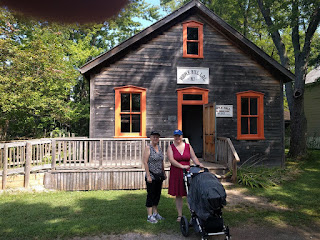 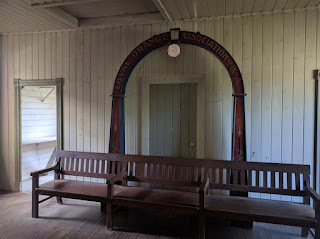 Were any of my ancestors members? 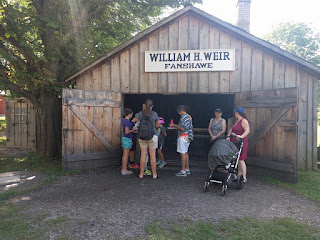 One of the essential trades 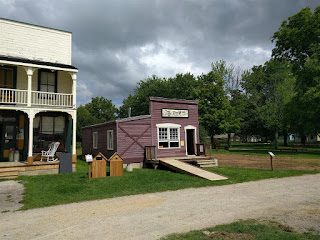 The print shop full of stories 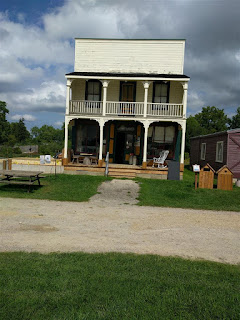 The general store came later and made life easier 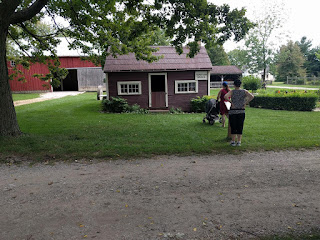 Now to my search for my roots. I asked the young lady at the entrance if there was anyone there who could tell me where Lot 2, Concession 4 might have been located. She said their most knowledgeable person was away but that another young lady named Allison was in the first cabin we would come to. She might have an idea. We found Allison, but she didn't know either. She said she believed there was a map on the table in the tavern. Sure enough, there was.


The map below shows the current location of Fanshawe Pioneer Village just west of Fanshawe Lake (which was created by damming the Thames River in 1952). The location of the dam can be seen at the bottom of the map. 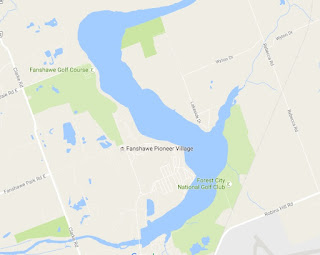 I discovered the map below on a table in the tavern. It depicts the lots in the southeast corner of old London Township. You will note some lots were set aside for the crown and some for the church. The Thames River is on the edge and you can see where it turns sharply to the west, one reference point with the map above. You can also see upriver where the river turns south, but this can only be guestimated on the current map because  man-made Fanshawe Lake covers where the river used to flow. It is evident, though, that the Pioneer Village is somewhere in the lower right part of the township. 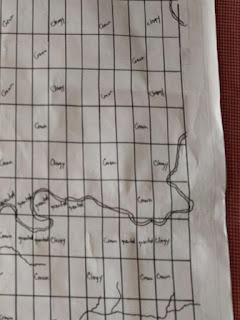 Below, Sandy's finger is pointing to Lot 2, Concession 4. The precise position relative to the current map isn't clear without a second reference point, but I estimate that the north half it is quite close to the village. So yes, the Guest presence in our fair country was right about here. 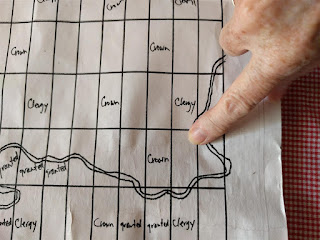 There was something satisfying for me about what we discovered on this journey. We not only found the spot but learned what it was like living here in those times. Life was difficult and the work was hard, but they survived and prospered. William and Elenor had eight more children, with many of them living into their 80's. William Williams Guest had a son Charles (1858 - 1947) whose daughter Lena Beatrice Guest (1897 - 1989) married James Thomas Woodend (1887 - 1971). They were my mother's parents and my grandparents.

It occurred to me as I was researching the family tree that my ancestors on this side were long lived enough that they could have qualified for the Howard Families (for those who read Heinlein). My potential is moderated by the relatively short lives of my father's side of the family, so my genetics are an unknown commodity.

After we left Fanshawe, I wanted to add one more link to my history. When I was under two years old, we lived with my maternal grandparents on Egerton Street in London for several months while my father worked on the Geological Survey of Newfoundland. I think I can remember that it was a red brick building across from the London Fair Grounds with a vacant side yard. My grandmother used to let people park here for the Fair (for a small fee, of course). There are only a couple of blocks across from the grounds and just one large red brick house, street address 520, with a newer building on the one side where the vacant yard could have been. 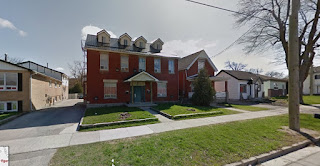 I may have lived here

We returned to Woodstock, where Heather and Sandy went to collect Jasper at day care while I looked after Fiona. 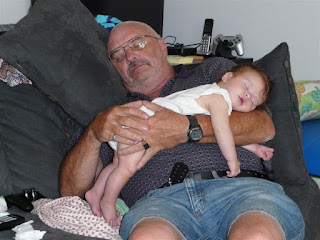 Me looking after Fiona

Tom picked up Subway for supper. Sandy and I split a new chicken parmigiana sandwich, which I found quite tasty. I will have to give some thought to what kind of toppings this needs to make it pop. I was dismayed to find that Monterey cheddar buns have disappeared from the Canadian menu and are only occasionally carried in the USA. Still, as a Type 2 diabetic, I should stick with the 9 grain.

We watched Cars (the movie) with Jasper again. He can recite parts of the script even though he can't hardly talk yet. I can see us looking for Lightning McQueen souvenirs in our future travels. Kim phoned and told us we should meet them at the Cambridge On Route Service Centre at 8:00 AM tomorrow morning to begin our grand family outing to the Toronto Zoo.

So we have another early start tomorrow. Sandy and I headed back to our room and, after I set three different alarms, we turned in. 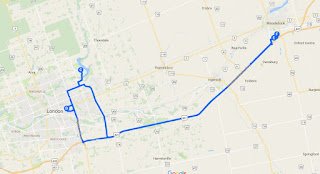