The alarms went off at 5:50, 5:55 and 6:00 AM this morning. It was Thursday, our last big grandchild adventure day for a while. Sandy and I dressed, grabbed our gear and had a hasty hotel breakfast before heading over to the house. 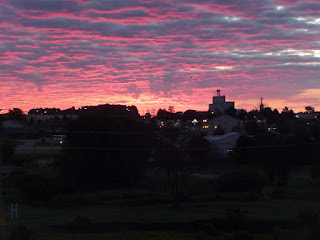 Tom and Heather had deployed the rear Stow and Go seats in their Caravan. What surprised me was that when the kids got loaded and everyone settled, I was in the driver's seat with Sandy beside me. We arrived at the Cambridge On Route with one minute to spare, Mike and family having beaten us by a couple of minutes. After everyone grabbed what they needed to go from the restaurants, we were eastbound and down with Mike in the lead.

Traffic bogged down as we approached Mississauga and didn't pick up again until we were past the Don Valley Parkway exit, allowing me to be thankful once again that city living has never been part of my life. After much stopping and going, we arrived at the Toronto Zoo just before 10:00 AM.

After we paid our admission and rented a stroller (for Jasper and/or Robyn as required), we headed over to the Panda exhibit where cubs Jia PanPan and Jia YueYue (born less than a year ago to two giant pandas on long term loan from China) are the zoo's premier attraction. It was early and the estimated wait time was already 90 minutes. In fact, it was only 60 minutes as we wound through a pavilion with all manner of panda information. Zoo staff had to keep reminding viewers that there were many people waiting behind them and they shouldn't dawdle too long. The pandas were cute but I don't see spending another hour waiting in line to see them again.

I looked for a Toronto Zoo app but couldn't find one that worked. No WiFi either. Their website was woefully out of date, too. According to it, mama panda is still pregnant. These were a few detail items that indicate they are not on top of their public face. 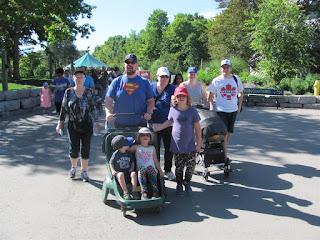 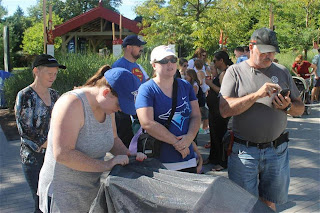 I'm searching for an app 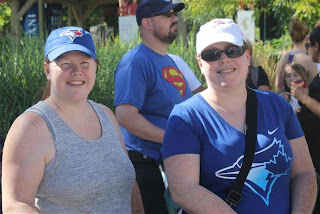 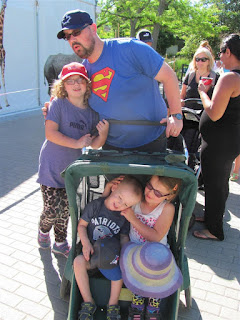 The start of the panda line 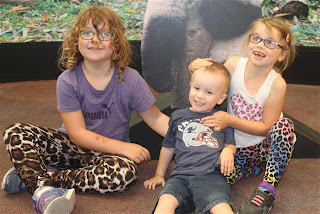 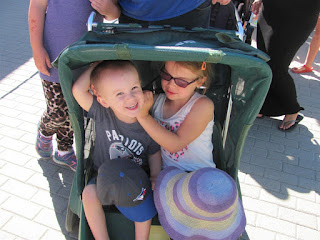 Why walk when you can ride 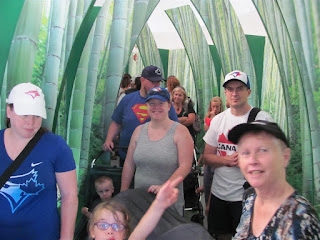 After all that, I never even took a picture of the actual giant pandas.

For reference, here is a map of the zoo. 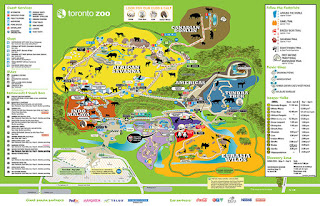 Our first post-panda trek was to walk the path around the Eurasia Wilds. I got to see a red panda without having to stand in line. In fact, we were the only folks there. We also saw camels, yaks, Barbary sheep, mouflon, a Steller sea eagle and a snow leopard. Signs said that more of the habitats could be seen from the Zoomobile shuttle that circled the perimeter of the grounds, but it was an extra charge and we didn't think the strollers would fit. 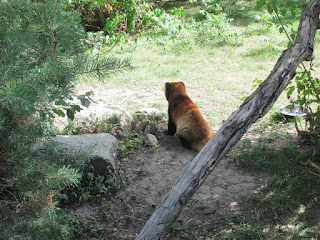 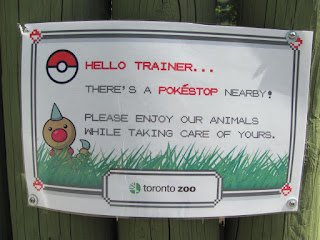 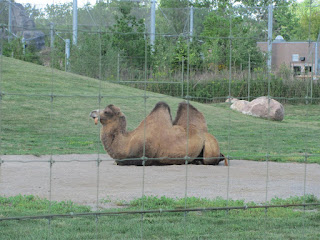 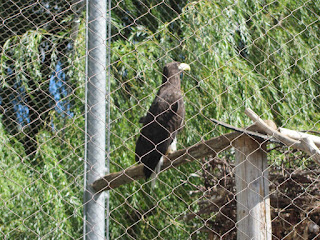 Next, we visited the Tundra Trek in time for the polar bear feeding. The polar bears were impressive just due to their size and demeanour. The Arctic wolf was hiding somewhere but we saw reindeer. 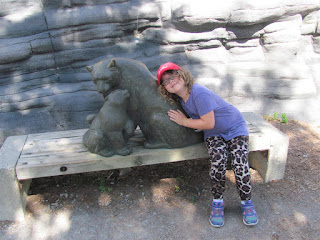 Jolene wouldn't do this with the real thing

After sharing a pizza from the Caribou Cafe (thanks Mike), we headed for Africa. The pandas weren't that exciting but the gorillas were. Jasper even got a start when he found himself face to face with one through a window. We toured the African Rainforest Pavilion and then walked to whole African loop. 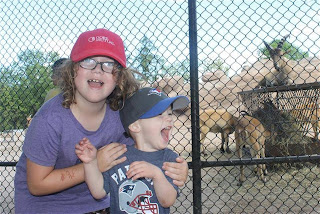 Are we having fun? 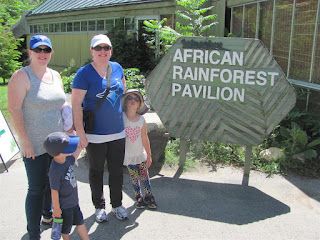 Let's get out of the sun for a bit 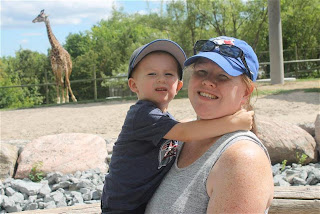 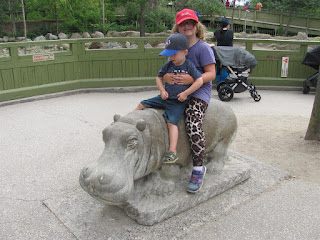 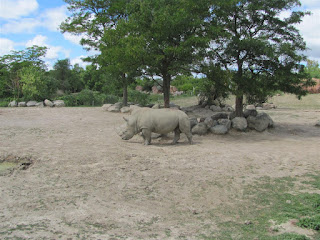 One alarming thing happened while we were visiting Africa. Remember Saturday when I fixed up the reservations and was told that we were good through to Friday? I got a call from Taz at the hotel telling me I was supposed to have checked out. I explained to her what had been done and she said she couldn't find any record of that. I told her I wasn't leaving and it was their problem. She said she had closed out our stay and would have to make another reservation. I told her to go ahead because we weren't going anywhere until tomorrow. She sounded stressed.

After Africa, we were winding down. We trekked down the hill and took a turn through the Australasian Pavilion on our way back to the gate. I was sorry we missed the Komodo Dragon feeding. 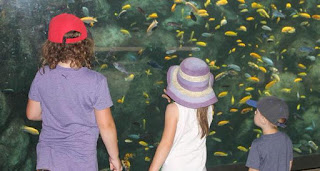 Nemo? Are you there? 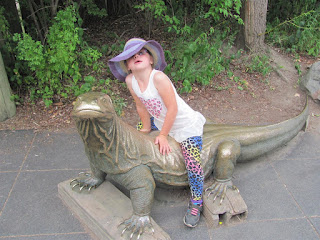 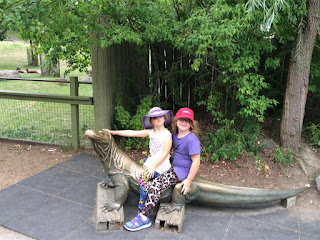 After a stop at the gift shop and returning the stroller, we left the grounds at 3:35. Once again, the kids were as well behaved as any three their age could possibly be considering the venue. The traffic west of the DVP was worse than this morning but we eventually arrived at the Old Marina Restaurant on Puslinch Lake in Cambridge.

Mike and Kim found this off the beaten track restaurant earlier this year. It is very nice considering it was attached to an RV park and they were able to set a table for ten right away. Oddly, they have a couple of O Scale model railroad loops around the ceiling where CP diesels haul intermodal cars with local advertising on them. Cute idea. Their signature item is a large gourmet hamburger, but I opted for wienerschnitzel, mashed potatoes and vegetables. I led with a delicious potato bacon soup that was so good that the spoon stood upright in it.  Thanks to Mike for supper, too.

The 40 mile trip back to Woodstock took two hours thanks to repaving before the Ayr exit. The funneled three lanes down to one. I always wondered what flaw in the human psyche leads some people to believe they are so special that they are entitled to jump lines ahead of someone else? However, truckers kept it from being worse by running rolling road blocks where they could.

We arrived at Tom and Heather's at 9:15 and got the sleeping kids into the house. Sandy and I returned to the hotel and checked in. The young lady, the one who fixed up my registration on Saturday, said she didn't know why Taz had a problem. She said we had been checked in through to tomorrow but Taz had erased the data in the computer. I told her I didn't care as long as our stuff was still in our room.

We packed our bags as well as we could and then hit the sack. 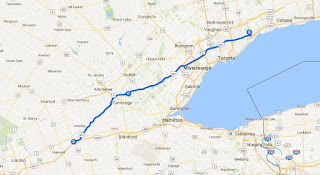