Happy Birthday to me!!! I was now 64, just like in the Beatles song. One more year and I will officially be old.

We were awake at 5:45 but didn't have the car packed until 6:30. It was raining fairly heavily as I scurried to get the bags into the back seat. We had a quick bite alone in the breakfast room before setting out. This rain was the type that soaked up the headlight beams and made the lines on the road difficult to see. I took it easy until daylight broke (after 7:00 AM, indicating that summer is drawing to a close). We drove through alternating bands of rain and not so much rain for a few hours. Some days, it is nice not to be on two wheels. 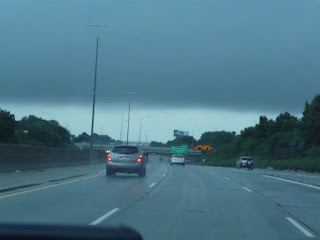 A wet morning in Michigan

We planned to stop and see old friends Scotty and Marlene in Adrian, Michigan. Scotty hasn't been well the last few years and has been missing from our rally circuit. As we drove towards Detroit, I was surprised by how light the traffic was. Then I remembered it was Saturday. Retired guys aren't always aware of weekends. Nevertheless, we went around Detroit via I-696, Michigan 14 and US 23. My estimated time of arrival was 9:30 and that was exactly when we pulled into their driveway.

Scotty has to stay close to his oxygen these days. He was a guru when it came to 800 cc Vulcans, but sold his bike a while back. Back in the day, he and I took a couple of trips across the continent together and I enjoyed our times on the road. Marlene still had her 500 Vulcan but it was advertised for sale as well. Scotty and I had one of our typical political chats just like the old days. Cynical is not enough of a word to describe his outlook, but the more I look the more I would call him a realist. It was good to see them and we'll have to do it more often. 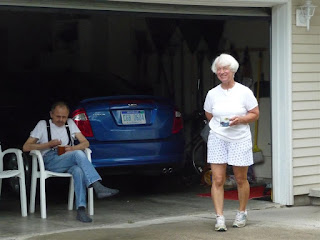 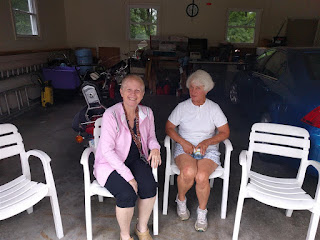 Two of the nicest ladies I know 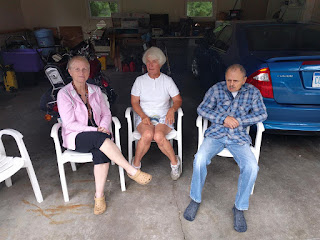 We left Adrian about noon and worked our way south on a selection of secondary roads. Before long, we crossed the line into Ohio and nice, clear pavement was suddenly rife with tar snakes. I hate tar snakes. In Delta, Ohio, we saw their two main industries, North Star Bluescope Steel LLC and Worthington Steel Co, side by side. We also a new greenhouse operation that was being developed. Nature Fresh Farms is an organic grower which also has facilities in Leamington, Ontario and boasts the largest commercial greenhouse in North America. 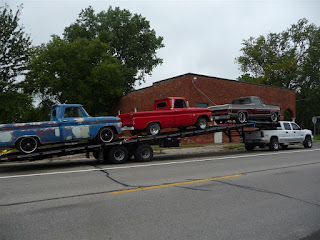 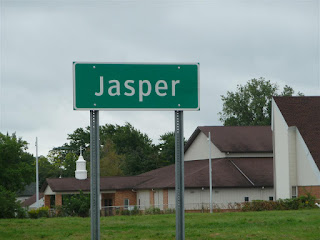 Thoughts of our grandson 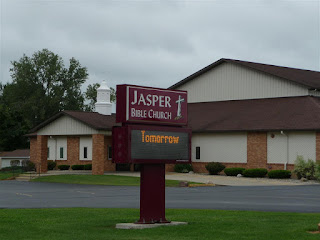 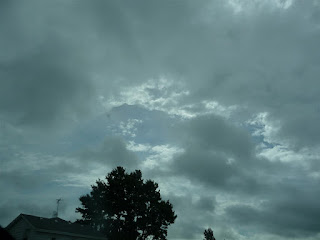 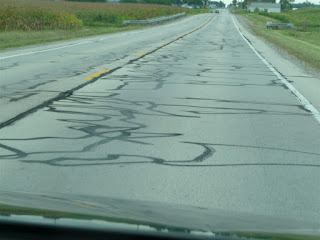 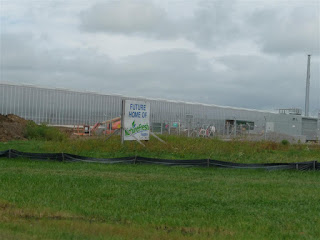 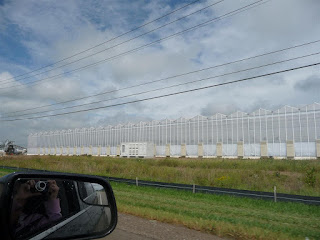 Another side of the huge greenhouse 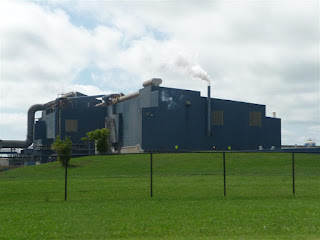 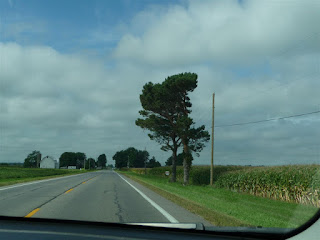 Trimmed for function, not fashion

Eventually, we reached US 24 and followed it southwest with a quick stop to pick up lunch in Defiance, Ohio. I remember a movie. The on ramp back to 24 was closed so we had to go a short way through town to the next interchange. 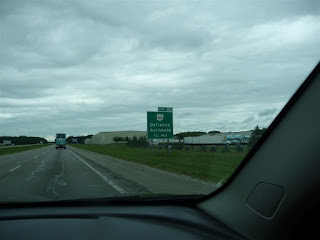 I wonder who they were defying?

Before long, we crossed into Indiana. They had a construction zone with lanes that had been slowed down so long that grass was growing through the pavement. The referred to it as a work zone but it was apparent no work was being done or contemplated. 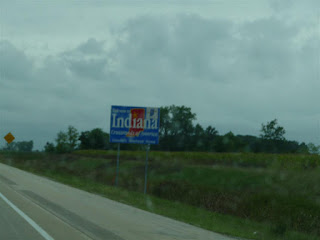 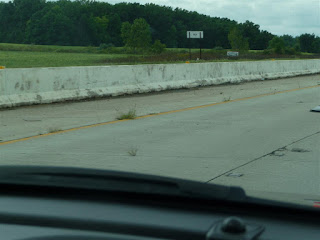 It's been a while since they closed that lane

As we drove towards Fort Wayne, ominous clouds appeared on the horizon. By the time we reached I-469 (aka the Fort Wayne Bypass) , we were in it. As we transferred to I-69 south, visibility was virtually nil and I slowed down. Some other folks didn't seem to understand traction and visibility limitations. 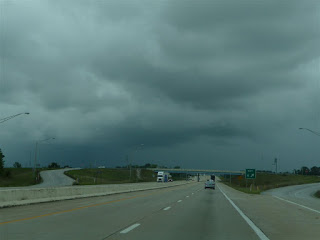 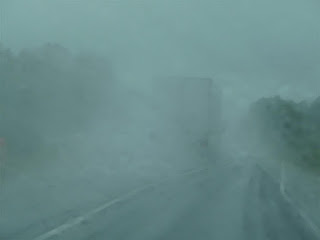 There's a road out there somewhere

By the time we got to Anderson, the rain was done and the skies were clearing. We fueled and got snacks at a Love's truck stop somewhere along that stretch. We took 465 to I-70 and shot right through Indianapolis before heading towards the Illinois line. 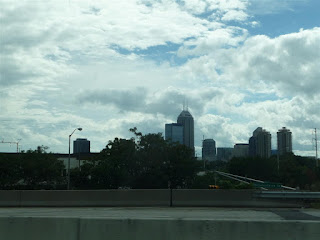 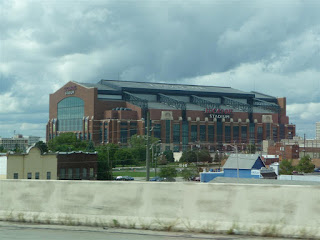 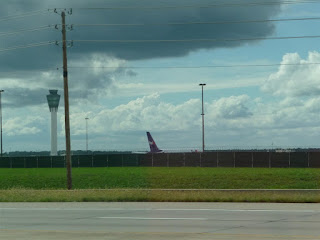 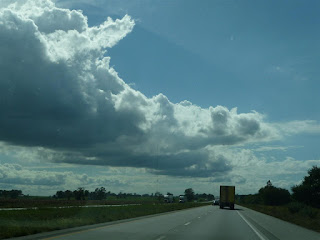 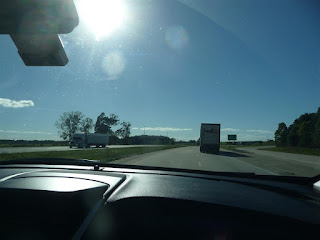 We crossed into Illinois at 5:35 PM Eastern which immediately became 4:35 Central. The GPS changed by itself but the car didn't. After a bit, I changed it myself. There were some single lane stretches after we went through Effingham. 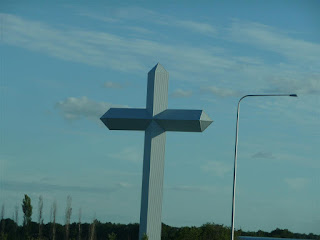 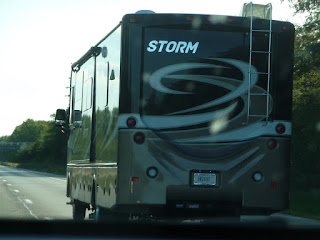 We were talking to Sherm, who was settled into his room in Oklahoma City already. I suddenly realized that the NASCAR race in Richmond was tonight, not tomorrow. I stopped at a Subway and attempted to adjust my drivers based on how they qualified. It turned out I was about an hour too late, an error that cost me dearly in the results as I dropped from second to third in our league and Sherm picked up 100 points on me. If I had been able to change, I would have beaten him for the day.

We picked up a sandwich to split and continued on into the setting sun. I had booked us a room at the Super 8 in Collinsville, Illinois, not far from St. Louis. We had stayed here back in 2013. The $80 room was costing $35 with our Go Fast and 3,000 Wyndham points. 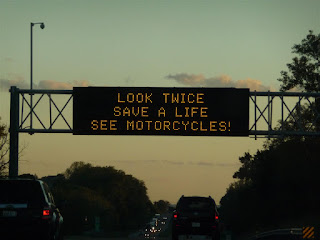 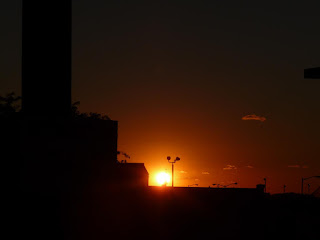 The motel  had been remodeled and was very nice. I found the race on TV and watched my unwanted drivers proceed to embarrass themselves. After the bills for the day were posted, I planned to finish this blog but got sidetracked as I had to review almost 250 birthday greetings on Facebook. I didn't have time to reply to each of them but I did read and like every one. It was a good way to end a good day. 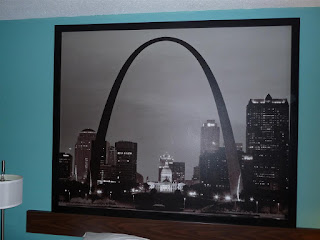 New picture in our room

I did a couple of preliminary things for the blog but figured I could finish it later because I just ran out of steam. The mattress and pillows were very comfortable and I was asleep in no time. 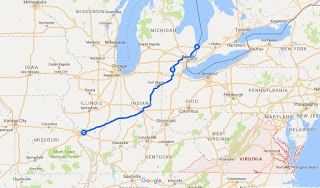