It was time to go home. The week here with our kids and their kids has been great but all good things must come to an end. We finished packing and took all our gear to the car before coming back to check out. Taz was on duty.

Heather wasn't at home so we went over to the day care building and found her just coming out. Apparently Jasper was not thrilled to be moving to the preschool room. He still had tears when she told him she had to leave and would see him at the end of the day. She looked little teary as well.

We followed Heather to Dean Michael's Griddlehouse for breakfast. We ate here once before and I had hoped we would get back sometime. I don't know about the griddle part but I am pretty sure they bake their meat in an oven. The bacon, sausage and black forest ham in my meal were tasty but not greasy. I also had scrambled eggs, wheat toast and substituted fruit for the potatoes. Now I hope we can go back again. 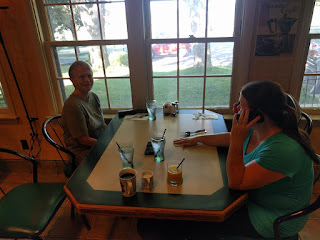 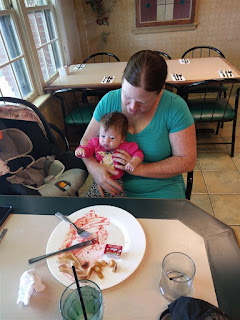 It will be a while before Fiona is into solid food

After breakfast, we said goodbye to Heather. We will be seeing her, Tom and their offspring in mid-October when they come to Sudbury to see the Splash'n Boots show.

When considering the route home, the major factor was that it was the Friday of the Labour Day long weekend. People would be heading out of Toronto like lemmings in all directions, but mostly north to cottage country. We usually travel against Toronto traffic but this would put us in the middle of it, depending how early the rush began. Like the Germans and the Maginot Line, I decided to go around as best I could.

Traffic was light as we took the two lane highways and county roads north through Tavistock, Arthur, Dundalk, Singhampton and Stationer. It was our first time on many of these roads. At one point, we were on the road to Damascus but I didn't notice anything special. 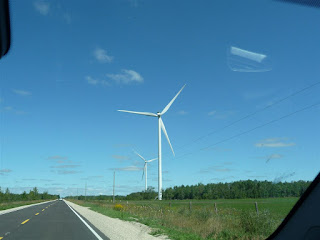 Although it was sunny and warm, we were shocked to see a few trees starting to show some colour. Fall is on the way. Dammit. 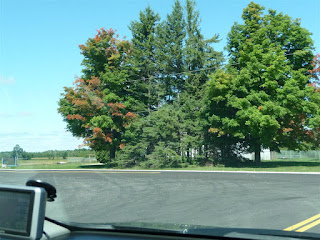 Knock of the coloured trees

In Stayner, I had to decide whether to continue on and arrive at Highway 400 via Horseshoe Lake Road, which Mike had trouble with the last time he came up on a Friday, or to go further north via Elmvale and Vasey Road. I chose the latter and planned to cut north further on and bypass Wasaga Beach. Instead, I miscued and ended up in the middle of town. Still, it wasn't too bad and then after following a line of traffic to Elmvale, we had the newly paved road to ourselves after we turned north towards Vasey.

There was a lot of traffic on 400 North but it was moving well. We stopped, got lunch to go at Mickey's in Parry Sound and kept going. Some kind of semi headed a line at 85 KPH that we caught up to north of the Magnetawan River, but we cleared them all after the aggressive use of a couple of passing lanes. Ontario folks can tell me why I didn't exceed 138 KPH by GPS while passing.

Once again, there was no line at the French River Bridge and we were only stopped for a couple of minutes. We arrived home at 4:22.

There is a week now to look after some chores before we leave for Arkansas next Friday. 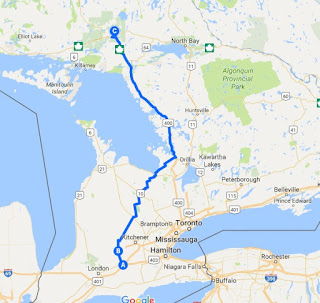