It was time to start our annual fall trek to Eureka Springs, Arkansas to celebrate the end of another rally season with our VROC brothers and sisters. This year, we would not be towing the bike and neither would Sherm. He and I decided this a couple of weeks ago.

I only got four hours sleep last night. It is funny how, when you know sleep is necessary, the body won't cooperate. We packed and loaded most of the gear last night (very unlike me) and just had to throw our overnight bags in this morning. The sun was just rising when we started out at 7:20 and we even beat the morning rush at Tim Horton's by a few minutes.

There was one disturbing thing this morning. When I went to take my pills, yesterday's were still in the box. I actually forget them about once a year. More vigilance is needed, or more reminder techniques, to make sure this was it for this one 2016. 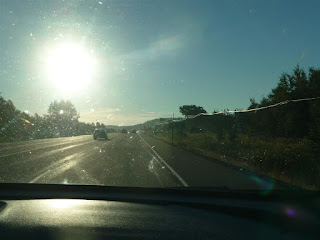 We were over the single lane French River Bridge with less than a minute delay. They were pouring concrete as we went by.

Sherm texted soon after to say he was on the road too. I tried to phone him back (can't text and drive) and was told I was not permitted to make long distance calls. I dialed 611 and a lady named Maria told me that the long distance option had to be unhooked to add my US package. Someone had forgotten to reconnect it. She did and then I called Sherm back. While I was talking to Sherm, Biker texted. I called him back and Sherm texted again. The next thing I knew, we were in Parry Sound and I wasn't feeling tired yet.

McDonald's provided a bathroom break and Sandy got a smoothie. I got apple slices and a muffing. I was trying to behave but I don't think I was doing that well. After another 100 uneventful  miles, we took another break at the Innisfil On Route Service Centre. 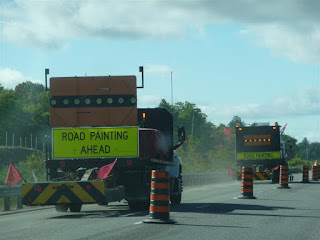 South of Innisfil on the six lane Highway 400, I was checking out a flatbed hauling culverts in the right lane. Suddenly, he tried to occupy the middle lane with us. My reflexes are still pretty good, although Sandy thought I had drifted towards him when she saw us suddenly getting closer. A look in her mirror and I was vindicated.

This has been an extremely warm late summer. I thought frost triggered the trees to change colour but there hasn't been any. Something else causes it because we saw some had already decided to stop being green for another year. 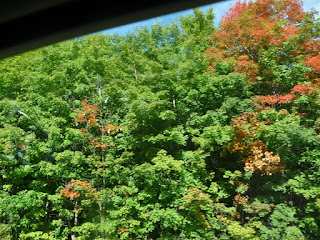 The cavalcade of colours begins 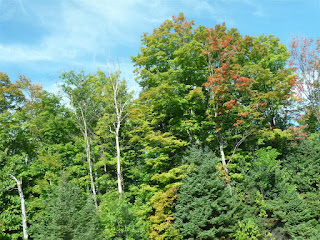 The first blush of fall

After the fiasco last week with the 400/401 interchange, that was not an option. I also preferred to avoid the expensive 407 toll, so we exited at King Road and headed across to Highway 27. They had construction signs that warned of possible delays on King but we never saw any. 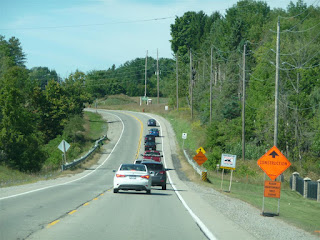 Highway 27 south would have been better if we hadn't gotten stuck behind a one ton truck with one of those little dump boxes. Eventually, we transitioned to the 427 freeway and followed it to 401 west. Construction was everywhere and we were slowed in a few places, but we never stopped and traffic moved fairly well. Eastbound 401 traffic through Mississauga was stopped at noon but I have no idea why. 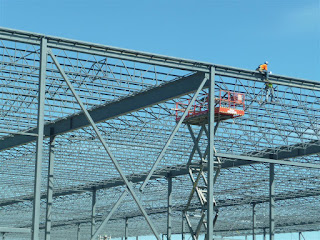 Be still, my acrophobic heart 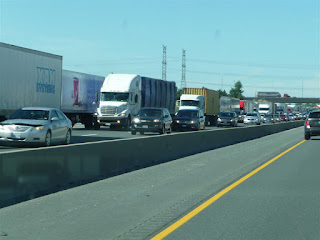 During a fast stop at another On Route in Cambridge, we called Heather and asked about lunch. We agreed to pick up Subway and take it to her house, so she texted me her order. In the next stretch, I wish we had a dash camera because a scrap metal truck knocked over almost every orange barrel in one construction zone using air turbulence alone. We got off in Woodstock, fueled the car, stopped at Subway (Heather wanted a veggie sub while Sandy and I split a chicken parmigiana) and we arrived at her house. 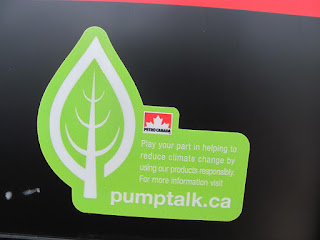 Gas company "use our product responsibly"?????

Jasper was in day care today but Princess Fiona was up and smiling like usual. She is one fun baby. After we ate, Heather and Sandy talked while I added 2 PSI to the right front tire with my little compressor. 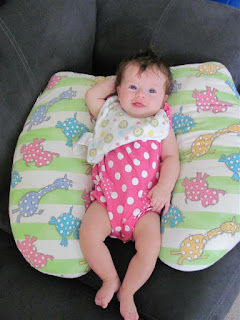 After saying our goodbyes, we continued west through London and onto the 402 to Sarnia. There were a few more coloured trees here but not many. We reached Sarnia on Highway 402 at 4:02 PM. 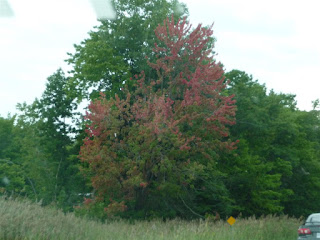 One of the changing trees along the 402

The path to the Bluewater Bridge separates cars and RV's from buses and trucks. Then, at the toll booths before the bridge, it mixes them all up again. Just another one of life's little mysteries as to why. 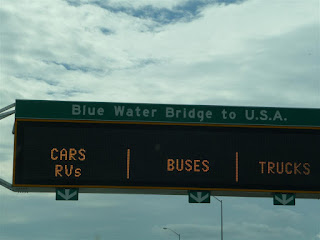 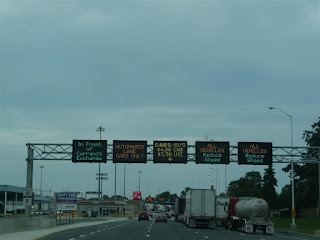 The bridge was three lanes our way and will be again, but it was only one lane today. On the plus side, there wasn't much traffic and there was absolutely no one in the NEXUS lane. We were asked three questions. Where? Eureka Springs, Arkansas. Why? See some friends and enjoy the mountains. What kind of food do you have? None. Have a good visit. 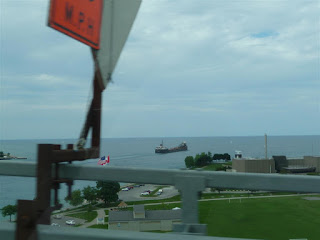 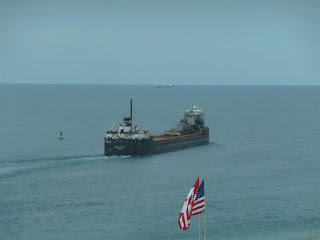 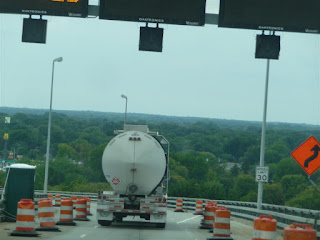 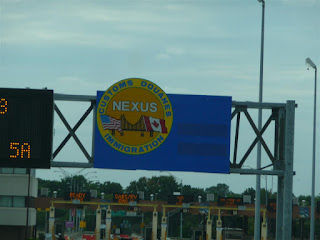 I made a mistake when I booked the room in Port Huron. Because we use Wyndham Rewards, I booked the Days Inn instead of our usual place at the Comfort Inn. The Comfort was quite nice but the Days Inn had seen better days. It was very faded, with weekly rates and more than a few children. This part of town was less chic as well. But the lady at the desk was pleasant and the WiFi was fast. Very fast.

Sherm posted that he was in Grants, New Mexico for the night and was out having Mexican food. After we got organized, we drove (easy without a trailer) a couple of miles to Bob Evans where we each had half a toasted turkey bacon club. Sandy matched hers with a salad while I had a very substantial bowl of chicken noodle soup. We passed on dessert. 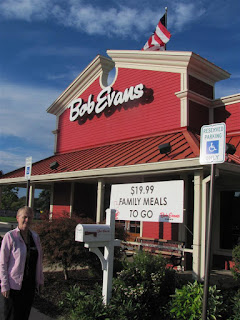 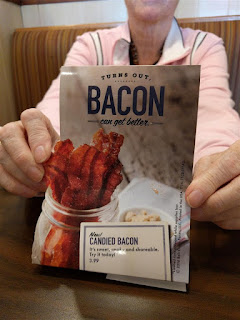 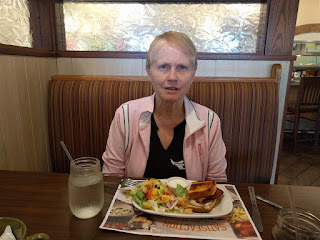 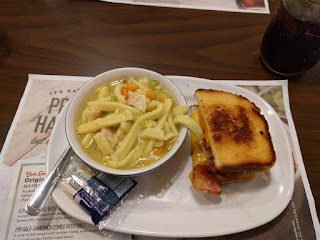 Look at my noodles

Marlene messaged me her address and phone number. We plan to stop and see her and Scotty tomorrow morning. They are about 140 miles from here in Adrian, but the GPS tells me we can avoid urban Detroit. Breakfast here starts at 6:00 AM and the alarm has been set.

I also found out why I haven't been able to get the Go Fast Wyndham Reservation Option (trade 3,000 points for a significant discount) on the website. Because it isn't there. It is only available on the app on my phone (and I assume Sandy's tablet). I booked a room at a Super 8 we have used before in Collinsville, Illinois for tomorrow night, The best rate with AAA was $80.00 but I gave up 3,000 points (20% of what it takes for a free night) and got the room for $35.00. Can't beat that.

Not wanting to get behind the first day out, I entered my daily expenses into Quickbooks and did the blog for the day. Starting the post, creating the map, sorting and uploading the photos, transcribing the notes and writing the story takes a while. Tomorrow, we will try for more photos and less notes. 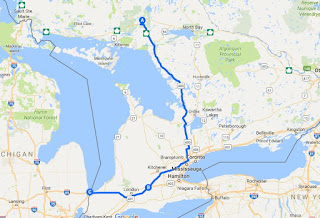