It was hard to believe that summer was drawing to a close. Despite the continuing hot weather, Labour Day Weekend was less than a week away. Heather and Tom had scheduled Fiona's baptism for tomorrow and Kim and Mike were taking next week off, so we were going to do a lot of catching up with the grandkids.

Saturday meant that we would see less trucks on the road but more touristy types. It was a nice moderate partly cloudy day as we enjoyed the new four lane almost all the way to the French River. All the heavy road work vehicles were parked, once again showing a lack of urgency to get the next stretch of Highway 69 four laning completed. One of the politicians noted recently that, despite the thirteen years since this project was started, they still don't have the land acquisitions finalized for the next stage.

The French River Bridge was still one lane but there were a few people working and there was no line up. We were the first vehicle at the light. Further south, the First Nations gas bar just south of the Magnetawan River is being expanded into an impressive looking facility. 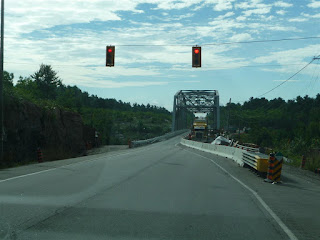 First in line for the French River Bridge

We stopped at McDonald's in Parry Sound so Sandy could get her smoothie. I've switched from a hamburger to a 1/3rd pound Angus bacon cheeseburger with no mustard or ketchup (easier to eat while driving without the sloppy condiments). I find this burger to be very tasty. Sandy had McNuggets.

It was all freeway from here. South of Waubaushene, we caught up to a slug of vehicles moving at about 105 KPH. The speed limit was 100, so someone should have completed their pass and pulled over, but it wasn't happening. It took me about 15 miles to work my way to the front, sort of like shuffling in the draft at Talladega. When I got there, I found a police cruiser in the right lane doing 105 with everyone afraid to pass. It was a Greater Sudbury Police Service vehicle so he wasn't patrolling, he wouldn't have a ticket book for this court jurisdiction and, since he was traveling, he wouldn't want bother himself with a minor speeding offense. I got to the front of the left lane and accelerated to 115 KPH, just short of demerit territory. As I passed him, he seemed to wake up and then picked up the pace. Then we followed him at about 120 to where he turned off in Barrie.

From Barrie south, the three northbound lanes were jammed solid. It was unusual at 12:45, almost like everyone had decided to delay their departure from the big city to avoid the rush, thereby creating a whole other rush. 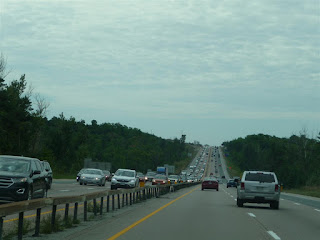 The question remained about what route to take. I wanted to avoid the ETR 407 and its exorbitant toll rates. Last time, Oakville to the 401 cost me $26.38 to cover about 40 miles. Without a trailer. The Highway 9 and 24 route would add over an hour due to the two lane roads, small towns and traffic. My remaining practical choices were King Road to 27 to the 401 or straight down the 400 to the 401. It was Saturday afternoon so I opted for the most direct way.

Who knew that the construction on the westbound ramp to Highway 401 was still going on after all these years. A little more than a mile north of the interchange, traffic ground to a halt. Of the six lanes, the left two should go to 401 East, the middle two to 401 West and the right two to Jane Street. When we finally made it to the ramp, we were down to one lane and cars were cutting into line from both sides. It's probably good Canadians aren't armed. The main reason for our stoppage was a private bus broken down in our single lane just before the ramp, forcing us to move left at low speed into what was otherwise a high speed lane. The icing on the cake was that the 401 merge lane was very short, requiring catlike reflexes to get into the moving westbound traffic without getting clipped.

The rest of the way, we were in heavy traffic. I tried to imagine how the left lane out of three can be brought to a stop when there are no ramps on or off from that side. Theoretically, that lane should just cruise along at a steady pace. So much for theory.

Past Cambridge, they were still widening the 401 between Highways 24 and 8. Some of the concrete barricades had been there so long that there was several layers of growth on top of them. The number of orange barrels caused me to wonder who makes them? Later, I did some research and found that the biggest manufacturer was Plastic Safety Systems Inc in Cleveland. Total production from all sources is about 750,000 barrels per year and a barrel will last about three years. The price depends on what type of reflective materials are supplied. Fascinating. Then I remembered this:-))

We arrived at the Best Western Plus in Woodstock about 3:15 PM. I had originally made a reservation for two nights and then, later, another for Monday through Wednesday. Thursday wasn't available (I shouldn't procrastinate), so I had us reserved at the Days Inn for that night. The Best Western is a lot nicer for only about $10 a night more. Once disappointment was that my request for a first floor room near the lobby wasn't accommodated but we were located on the third at the top of the stairs that led to the gym and the pool.

As we were unpacking, Heather came by with Jasper and Fiona. Jasper was almost 2 1/2, while Fiona was just over three months old. JJ wasn't shy at all. 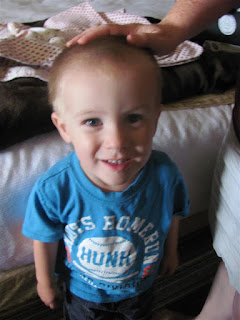 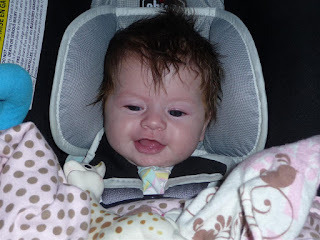 We decided to go to Boston Pizza for supper. Both kids were as good as gold during the meal. Jasper coloured with the crayons provided and Fiona slept. Jasper had a grilled cheese sandwich, the go to meal for a child, while I struggled to find something on the menu that looked good. Sandy and I eventually shared a Hawaiian pizza. 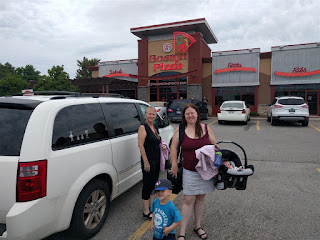 Jasper was falling asleep after we ate, so Sandy went back to Heather and Tom's house in their van while I swung by the hotel. At the desk, I asked about combining our reservations. The young lady typed on the keyboard for a bit and then said it was done. She even extended us to Friday, so I cancelled the Days Inn. Then I went back to the house and visited with Heather (and Tom, who had just gotten home from work) for a while. We watched Cars with Jasper, who had perked up. This was his favourite movie. It was still early when we returned to the hotel and went to bed, my plans for a session in the fitness centre shelved for another day. 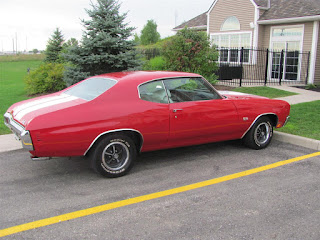 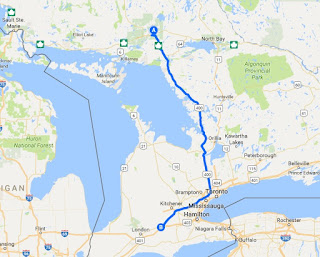