It was departure day again. As mentioned in the last post, we were heading for the VROC Wolfman's Wandering Rally (WWR) in Williams, Arizona and then on to the High Sierra VROC Redux in Topaz Lake, Nevada. Strangely, Facebook brought up a memory from this date in 2011 when we left, heading west in our RV. Also, as previously stated, we were not hauling the trailer.

Most of the gear was packed and loaded yesterday. All we needed this morning was to load our overnight bags. We pulled out of the driveway before 6:00 AM. Despite having been 88F on Wednesday, yesterday only hit a high of 55 and it was 41 under clear skies as we rolled out. 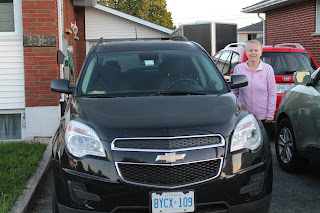 We got McCafe and a sandwich for breakfast. Despite the pressable buttons on the lid, Sandy's decaf coffee came with a D written in marker. I pointed the button out to the server and he said they were told not to use it. Apparently, management thinks it confuses the customers. I think there is no hope for this particular management.

Traffic was light to Parry Sound, where we stopped at another Mickey D's so Sandy could get her inaugural smoothie for this trip. I settled for another coffee. 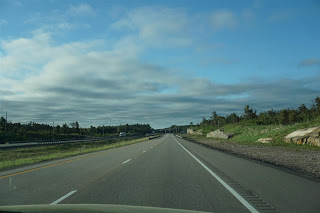 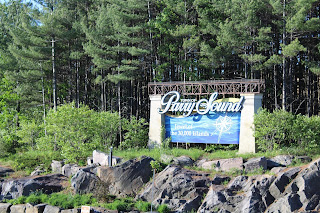 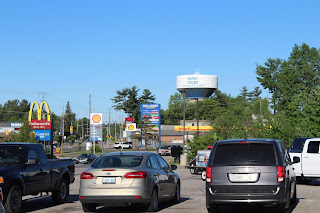 This is a great place to visit

South of Seguin, Highway 400 had been recently resurfaced. The orange barrels were still there and the pavement was great. This could not have taken very long, making it an impressive job. Miller Paving? 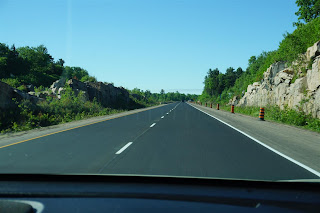 The excellent new surface on Highway 400 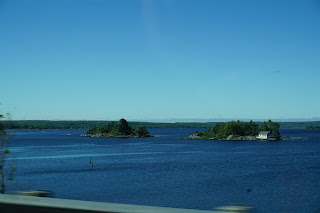 Travelling without the trailer was a lot easier, especially when we got into traffic on the six-lane south of Barrie. I was able to work traffic, including using the special right-hand passing lane. This was the lane that was empty when most of the lazy drivers planted themselves in the middle lane. I made pretty good time by sticking to the rightmost clear lane.

I did slow in the 80 KPH construction zones, of which there were many. I slowed to 110. Although I was still doing 30 KPH (18 MPH) over the limit, I was the slowest thing on the road. Nobody follows the speed limits so I think it would be only fair to increase them and then enforce them. 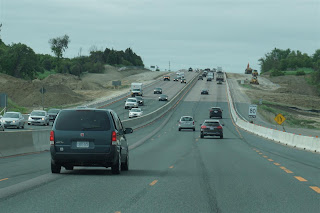 I was doing 110 and getting passed

As we passed Major Mackenzie Drive, the compass sign said, "6 to 7 minutes to 401". It was Saturday mid-morning, so we took a chance on the free route and it worked out. Traffic was crawling northbound as Torontonians tried to escape to cottage country. Then 401 Eastbound was stopped with people trying to get into the city. People are funny. We sailed right on. 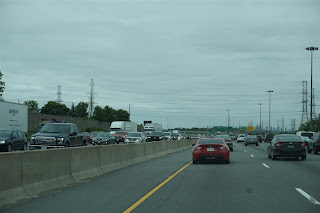 We saw a sign for Pearson Airport with sponsors on it. Then we saw several electronic billboards that, due to their volume, made me think of science fiction movies. We also saw compass signs that said, "Please don't tailgate emergency vehicles". How about don't tailgate ANYBODY? Then there was another one that said, "Expect Police Enforcement". I commented on this on the last trip. We ALWAYS expect police enforcement. Who approves these signs?

We cruised along at 75 to 80 MPH, again using whatever lanes were available. It had been a long time since I had maintained this pace, but I adapted quickly and soon it seemed slow. We stopped at the Kitchener On Route Service Centre to use the facilities and then at Arby's in London for lunch. 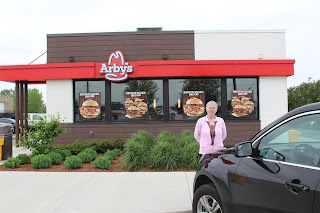 Colonel Talbot gave my great great great great (maybe a couple more) grandfather William Guest 100 acres in London Township about 1822, which allowed my maternal grandmother's family to flourish in the area. I always wondered who the Colonel was and now I find a connection to the family. 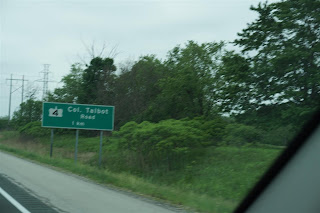 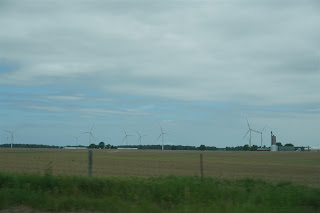 We followed the NEXUS line over the Bluewater Bridge to Port Huron, but could not find a NEXUS booth. Luckily, there was no lineup so we were processed through the regular booth quite quickly. I said we were heading for Arizona, would be gone about 25 days and I declared two dozen butter tarts. He said we were good to go. 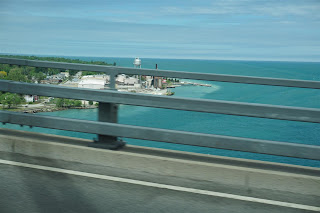 Blue water under the Bluewater Bridge 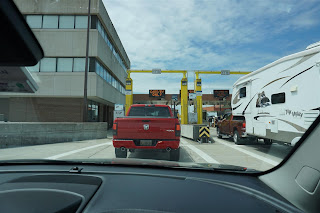 This was the whole line at Customs

The GPS tried to take me south from Port Huron but I persevered and stayed on I-69 to avoid congestion. We saw some interesting things as we transited southern Michigan. 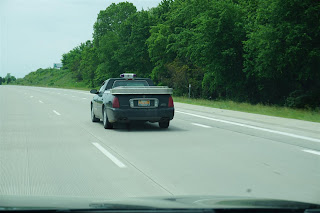 Somebody tried to turn a Cadillac into an El Camino 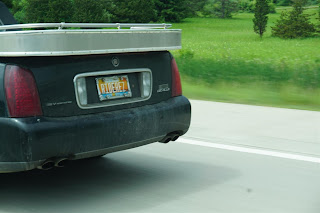 Possibly to carry VIP's in parades? 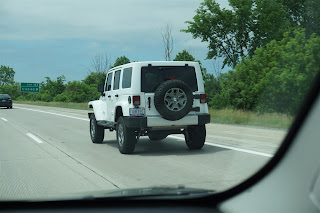 TDPLE55 got past the censors 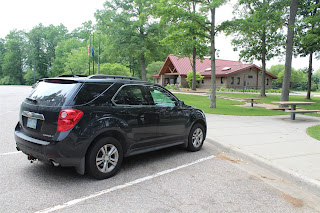 Giving my eyes a break in a Michigan rest area 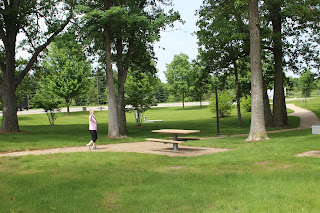 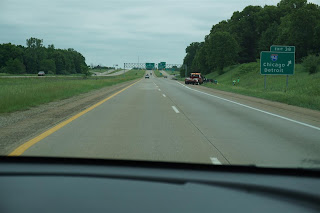 Someone wasn't having a good day 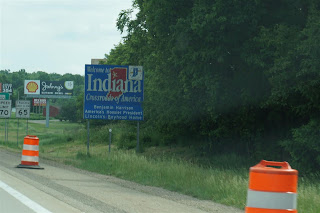 Earlier, we were listening to Tinseltown: Murder, Morphine, and Madness at the Dawn of Hollywood, an audiobook we borrowed from the library. After the stop at the rest area, I switched to Heinlein's Number Of The Beast. I read this book decades ago and developed a thing for D.T. Burroughs Carter. The reading was keeping me awake, but Sandy decided she didn't like the story. I'll save it for those brief moments (hah) when she is napping.

We arrived at the Hampton Inn in Auburn, Indiana about 5:15. I had checked in online during one of our stops and picked a room on the first floor near the lobby. There should be a sign on the external side door saying the lever needs to be lifted UP.

We used to stay at the Super 8 here in Auburn but, a few years ago, it showed signs of poor management and we experienced our only bedbug incident in over forty years of travelling. When we slipped over to Applebees tonight for supper (grilled chicken Caesar salads for both of us), we saw the lot at the Super 8 was empty and there were dumpsters on the property. A check with the Wyndham app said there were no rooms available. Maybe they can turn it around? 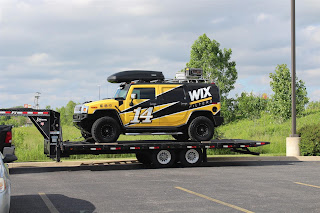 In the lot at the Hampton Inn 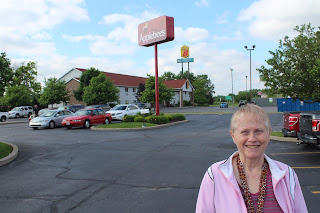 The Super 8 in the background is (luckily) closed

Back at the hotel, I worked on the bills, photos and notes. It is important that I not get behind on the trip because catching up is so difficult. It was all up to date before I went to bed. 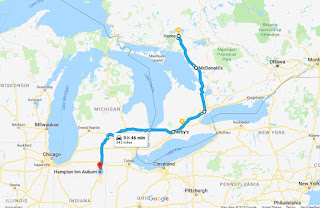