I forgot to take my blood pressure meds last night so I had them this morning with my coffee. Pop's was closed so we had some Jimmy Dean microwaveable omelette concoctions that Sandy picked up at Walmart yesterday for breakfast. They were pretty good. I wish we had something like that in Canada.

Pappy indicated last night that we would like to ride with us today so we waited for him to show up. We started out around 9:00 AM with Sandy and I in the lead, Vickie and Kay second on their GoldWing trike, Debbie third on her Spyder and Pappy bringing up the rear on his Vulcan Classic.

The GPS route Bohler set up worked well. It was tricky in Waynesville because US 276 was closed due to roadwork and the detour was not marked. We got through and soon were heading up 276 across the Blue Ridge Parkway and down the other side through the Pisgah National Forest. It was a joy to be back on the winding mountain roads and we had no one ahead of us. I was amazed at the way Vickie was able to through that big trike through the curves. 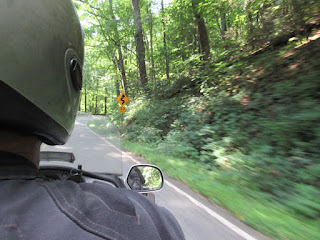 Not much in the way of straight roads 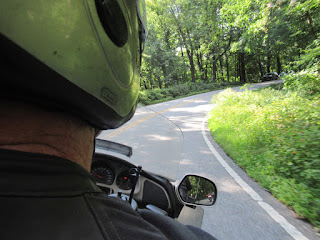 Great riding
We stopped at Looking Glass Falls, where the ladies and Pappy walked down the stairs to get a better view. Sandy and I waited up top. 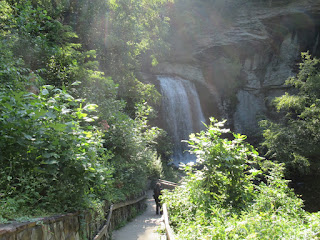 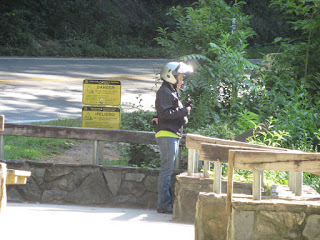 Sandy watching the others negotiate the stairs 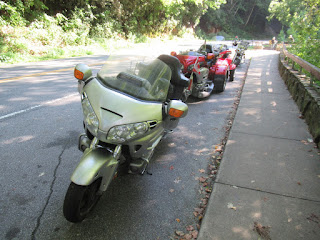 Pretty bikes parked in a row
From the falls, we continued on a short way to the Pisgah National Forest Ranger Station and Visitor Center. We stopped to use the bathroom facilities and talk to the volunteers manning the counter. 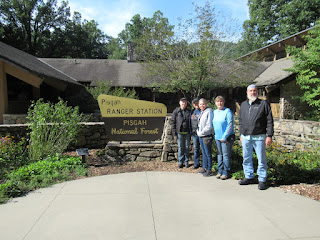 Pisgah Forest
We continued on US 276 to US 64 and then east on 64. The ABS light was flashing again so I stopped for a moment, shut the bike off and then fired it up again. No more light, thankfully. We turned off 64 and followed back roads before reconnecting with 276 south to the South Carolina state line. There, we turned of on an even more back road and proceeded to A Pretty Place on property owned by the Greenville YMCA. There, we found the Fred Symmes Chapel, the object of today's ride. 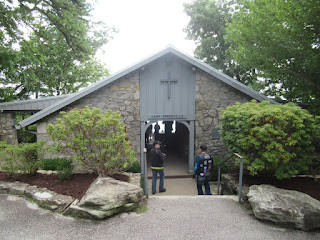 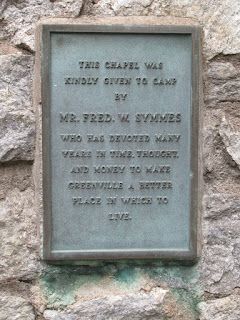 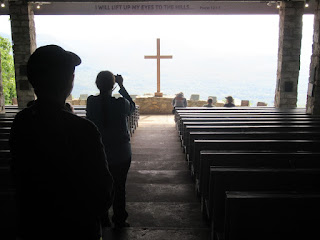 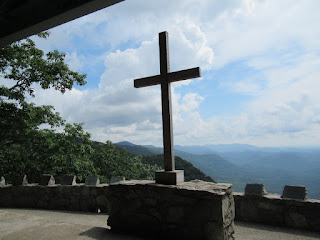 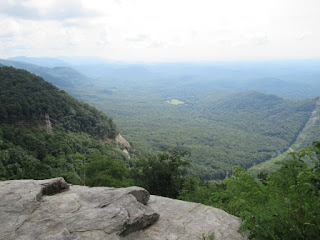 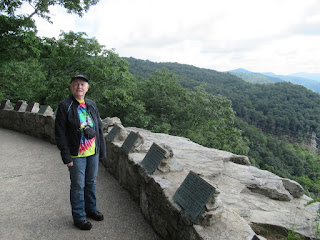 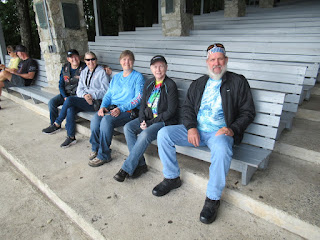 From the chapel, we retraced our route back to US 276 and followed it north to Brevard where we reconnected with US 64. This took us to Rosman, where we fueled up before starting up on SR 215. I had forgotten how technical the first part of 215 was. If you can ride this, the Tail Of The Dragon would not give you a problem. When we reached the Blue Ridge Parkway, we turned left and continued on the the Richland Balsam Overlook, the highest point on the BRP. 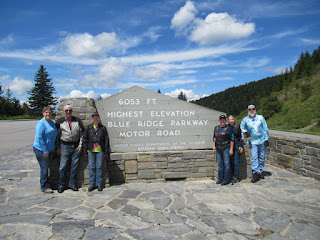 Richland Balsam Overlook
Clyde's in Waynesville no longer opened for breakfast but they did lunch and supper and were right next to our route. We rode the BRP to Balsam Gap and then exited onto US 74 into Waynesville. 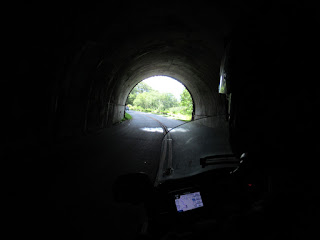 The BRP is famous for tunnels 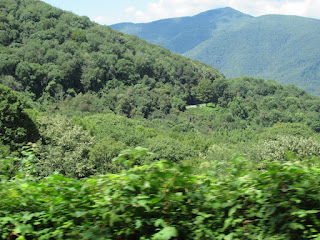 You can see our road down in the distance
Clyde's food was good. Portions were large. The server was very efficient. All in all, it was still a good place to eat even if it no longer opened at 7:00 AM. 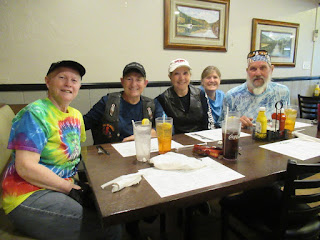 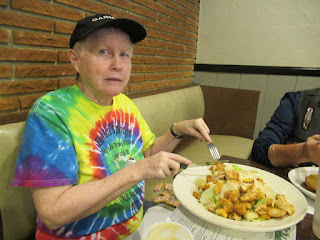 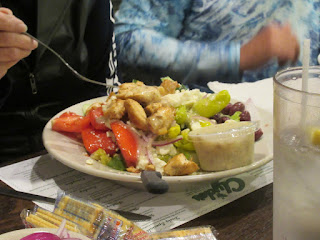 Kay's even larger Greek salad
From Clyde's it was a short run back to the motel. We got in about 3:15 and found the Spectrum guy was there again trying to get the cable TV to work. Eventually, he was successful. 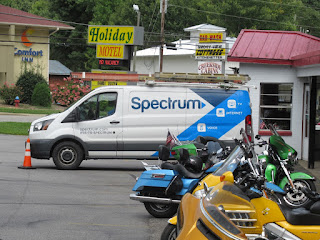 While we were gone, Joker had arrived in his Corvette while Ice Cream and Sharon came in their four wheeled vehicle. Butch and Teresa from Kentucky had arrived on their Nomad and were in the room next to us. Then Cargo showed up too. 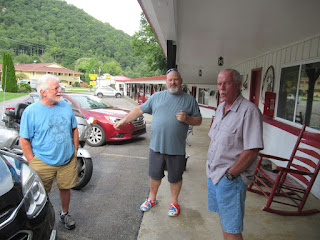 Joker, Cargo and Butch
After some visiting and catching up, Bob found that the Bearwater Brewing Company had food in addition to brews so a bunch of us wandered over. Sandy and I were mostly full from Clyde's but we split a small pulled pork sandwich and fries. I also had a glass of cream ale milk stout, something I haven't had since we were in England. It hit the spot. 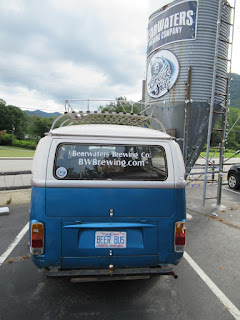 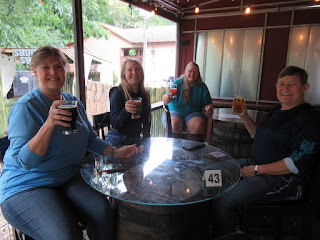 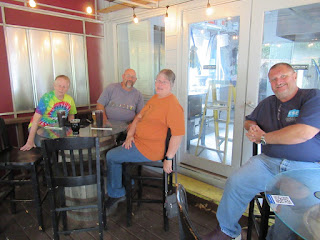 Waiting for food
Back at the motel, Snubs and Pickles had arrived, as had Blondy. I don't think we had seen them in over ten years and Snubs was just getting back to riding after an extended hiatus. Joker joined us as we were having a good talk. I was showing Snubs The Ballad of the Gap on Youtube, the video that makes me homesick for a place I don't even live. Then I decided to send the photo below to Mark Faulkner in Toronto. He was the creator and performer of the video. He recognized Maggie right away. 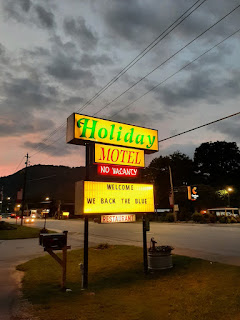 A one ton dually pulled in hauling a huge trailer. Joker and I wandered over to see who it was. Didsbury Dave from Albert had arrived. He was hauling his Nomad in the trailer. Unfortunately, his better half Pebbles had been unable to come.
Joker had some motorcycle stuff he was trying to give away. Most of it was Kawasaki related and some of it was one of a kind. I got this long sleeve shirt the the VROC Reunion in Eureka Springs, the first year it was held there. There are the names of the attendees printed on the shirt. I will definitely take this to ES in a couple of weeks. Sandy got gloves and a jacket. When Blondy found I wore a large, she gave me a WARB (We Ain't Right Bunch) shirt as well. Thanks Joker and Blondy. 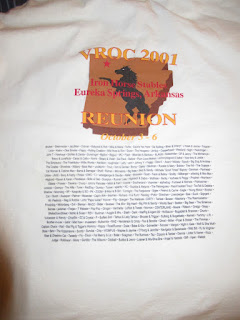 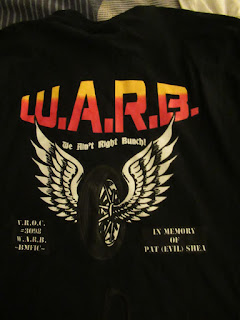 There were no firm plans for tomorrow. Sandy and I were about the last to go back to our room at about 11:00 PM. As usual, she went to bed and was asleep as I settled in the do my end of day chores. 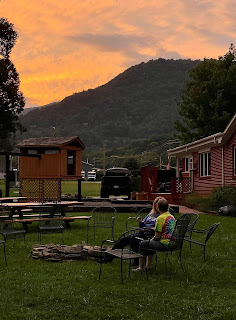 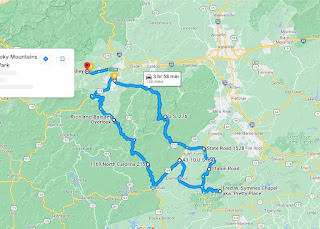 Thanks and its great to see ya back in action!!!!!

Lovely Reading and Photographs...Wonderful to know that now you are bigger bunch of Buddies than earlier this morning. Stay safe.

What a great way to get everyone back together again! And thanks for 1 more view of my non-monetized video!